According to penn manor’s wellness coordinator, Dr. Dawn Janssen, the district had a wellness program in the past but was forced to discontinue it due to budget constraints. Then, in 2009, Cindy Rhoades, who was the district’s community relations coordinator at the time, came to Dawn and asked if she would be interested in helping her start a support group for people who wanted to make some changes in their lives.

This small, voluntary group laid the foundation for the Make One Change concept that has now grown into a district-wide theme.  Over the last few years, the district’s leadership revisited the need for wellness and a wellness coordinator, hoping it could serve as a way to cut health-insurance costs. Dawn, who is a health and physical education specialist in the district, was asked to serve as the proposed program’s coordinator. “It’s something I’m passionate about,” she explains of her willingness to take responsibility for the program.

Being on the job is critical in a schoolroom setting. Yes, substitutes can take over in the case of illness, but in most cases, the rhythm of learning is disrupted. “And, we want to be good role models for our students,” Dawn says.
The first task was to form a Wellness Committee; members were recruited from each of the 11 buildings. The committee devised the theme, Make A Change (MAC), as the district’s rallying cry for the 2012 and 2013 school years. In 2014, the emphasis was placed on mental health. Working in a school setting does offer advantages. The campuses are tobacco free. Fitness is as close as the gym. Healthy food is available in the cafeteria. And, of course, professional guidance abounds.

But, as biometric testing proved, access doesn’t equate to robust health. Thus, the first day of school at Penn Manor is now observed as Wellness Day. And, the programs Penn Manor has instituted are changing people’s lives, perhaps even saving them.

Consider Sharon Knighton, who works in the business office. She’s lost more than 100 pounds over the course of the last 18 months.  Being overweight was a family trait. Her father, who weighed more than 500 pounds, had multiple health-related problems. He feared Sharon was headed in the same direction. “I overheard him telling my mom that if I didn’t do something about my weight, I would end up like him,” Sharon explains.  A year later, her 66-year-old father was gone.

Sharon says her father’s death was her wake-up call. Already having knee issues, she turned to Dawn, who devised an exercise program Sharon could follow. Next, Sharon adopted healthy-eating habits.  Now, she professes to feeling “different in all kinds of ways. I grab life. I’m doing things I never dreamed of doing.” That extends to running 5Ks and purging her closet of clothing that no longer fits. “I had every size,” she notes. “Getting rid of the large sizes was hard,” she says of the psychological security blanket she was parting with.

John Matusek, a fourth-grade teacher, credits MAC for numerous changes in his life. He remembers Penn Manor’s first foray into healthy initiatives. The emphasis was on physical activity, but at 5’5” and 208 pounds, hiking and kayaking were too challenging. Adding to his poor physical condition was the fact he had smoked for “many, many years.”

John also got serious about correcting his “terrible eating habits.” Fast food was the mainstay of his diet. With MAC’s help, he was able to wean himself off his favorite, high-fat, high-calorie breakfast sandwich. He learned how to make healthier choices at such restaurants and began to cook simple, healthy meals at home. As a result, he lost 40 pounds in a year’s time. Dosages for high blood pressure and cholesterol medications were cut in half.

Molly Miller, who is a technology/engineering teacher, had undergone routine blood testing in April 2010. Now, it was August, and the opening day of school meant Wellness Day was being observed. She decided to undergo the free screenings that were being offered. Twelve hours later, she received a phone call instructing her to see her doctor ASAP.

Molly was diagnosed with a rare blood disorder called Idiopathic thrombocytopenic purpura (ITP). A low platelet count affects clotting, which is not good for someone who works around saws and other sharp tools. She had no idea anything was wrong. “I bruise easily, and I’m a bleeder anyway,” she explains of dismissing ITP’s indicators. Despite being among the less than 1% of the population afflicted with ITP, Molly has been assured that with added vigilance, it won’t affect her career. “It’s something I can live with and lead a normal life,” she reports.

In 2010, Mary Barnett, who is a physical education teacher, remembers being told the “Boobie Bus” was coming to campus to conduct mammograms for staff members. Because of her age (50 at the time), she admits she had totally ignored that aspect of her health. The screening detected a problem and the next day, she saw her OBGYN, who discovered a lump. Another mammogram followed, as did an ultrasound. A biopsy was next on the agenda. “I thought, ‘This can’t be good,’” she recalls.

Fortunately, Mary’s breast cancer was detected early. She underwent a lumpectomy, which was followed by radiation. “It was handled so quickly that I don’t feel like I’m a cancer survivor,” she says. “However, now I’m very proactive.” That extends to educating others. Her son is a member of Frostburg’s lacrosse team, which hosts a tournament each October. Mary approached the coach about incorporating breast-cancer awareness into the tourney. He agreed and Mary launched the awareness program by purchasing pink laces for the team’s players. The program has grown to include pink T-shirts and crowd participation. Despite the fact that Mary’s son graduates this year, the coach hopes to continue the awareness program at future tourneys.

Dawn says these are only four of Penn Manor’s success stories. “I am aware of others who have quit drinking soda, started exercise programs or began using stress-management techniques,” she says. She also points to statistics. As a result of skin-cancer screenings conducted in August 2014, half of the participants were advised to follow up with their physicians (including Mary, who had a mole on her foot that registered suspicious cells). One-quarter of those screened for cholesterol were borderline high, while two individuals were high. During blood-pressure screenings, three people were found to have hypertension, and an additional nine were deemed to have pre-hypertension. “Thanks to testing, our employees are receiving the valuable health data they need to become success stories,” says Dawn.

Dawn credits the administration for Penn Manor’s success stories. “They’re behind our wellness program for the right reasons,” she notes. “Just the other day, the superintendent said to me, ‘This isn’t about the money anymore. It’s about saving lives.’” 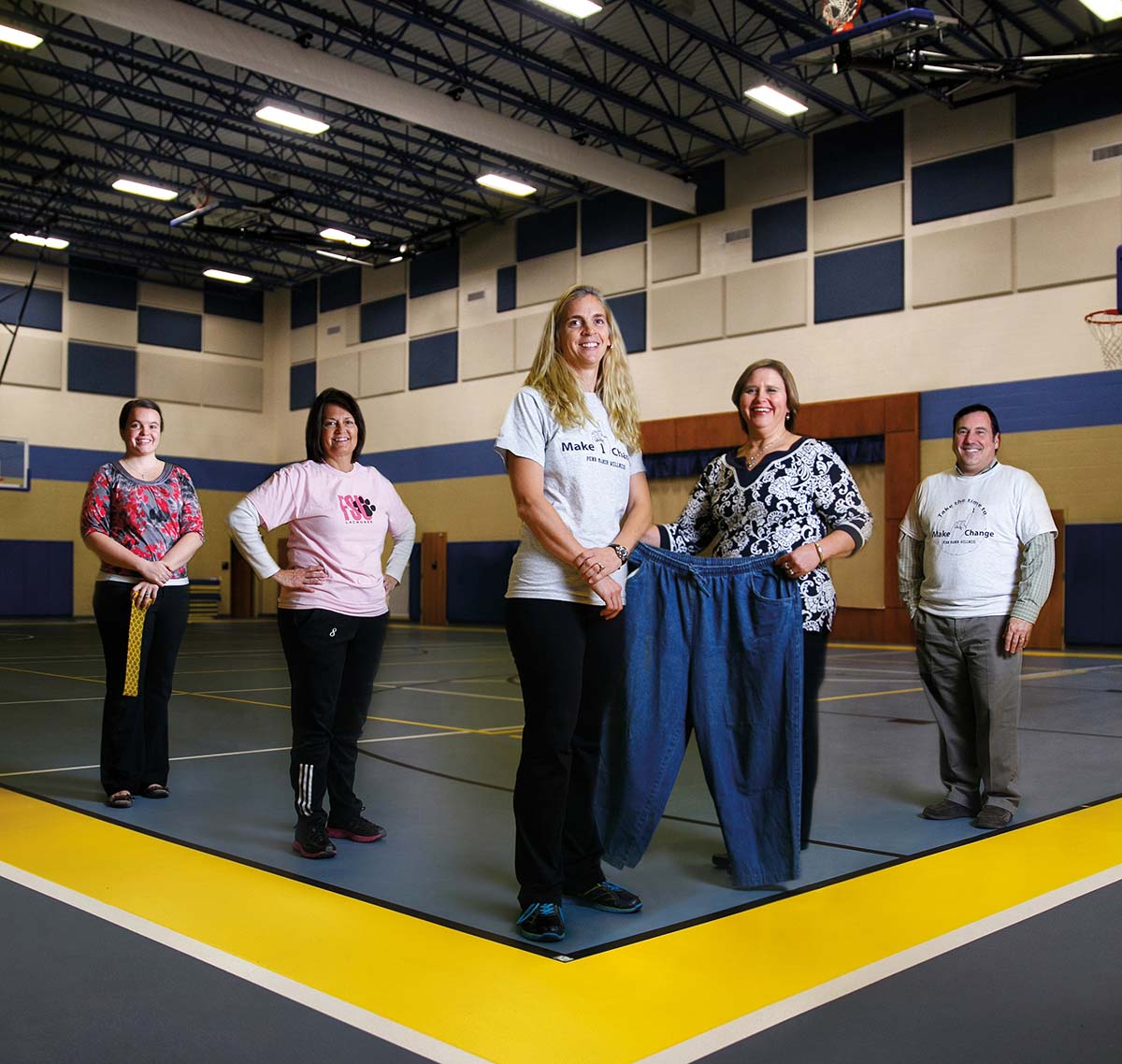