For 51 weeks of the year, we live for that one special week at the beach. It’s a summer tradition that becomes even more meaningful with the passage of time.

Looking back, our journey to the beach started 25 years ago, during recess at New Holland Elementary. John and I were practically neighbors, so by pedal power or the parent taxi, I became the friend who always seemed to be over at his house. Shared bus rides to school later upgraded to bicycle and eventually by car, continuing all the way to Millersville University. We also attended the same church youth group and, along with a half dozen rowdy friends, we somehow got away with working together at Martin’s Trailside Express.

At that time, Ocean City, Maryland, was our summer getaway. We’d listen to Mr. Greengenes perform the likes of Bohemian Rhapsody by Queen and Africa by Toto late into the night. Afternoons were spent sleeping on the beach. On one particular trip, I carried John’s now wife’s engagement ring, keeping it safe until he found the right moment to propose.

Now, our week at the beach is the anticipated family event of the year, and decades later I’m still the friend who is always along for the ride. Often mistaken for maturity, it’s a time filled with nostalgic traditions that unexpectedly improve with each passing year, a patina deepening with memories from past adventures.

The destination has changed to Sea Isle City, New Jersey. But, it always begins here, in Lancaster County, where local foods are collected for our pilgrimage. Strawberries sourced from roadside stands, mushrooms from Kennett Square, farm-fresh meats, cheeses and baked goods will all pair wonderfully with fresh-caught seafood.

The annual June migration brings us first to a deck with an ocean view, replacing eager longing with unbridled joy. Everyone trickles in to be greeted with copious amounts of gin gimlets, conversation and laughter. Life stressors are lifted away by the warmth of togetherness and the summer breeze, picking up right where we left off. Everything this week will be simple, a key ingredient often missing from life.

Surf fishing has become a group event led by the “twins,” Todd and Joe. They’re not really twins, they’re just lifelong friends of the same rare breed. We spend days by the water with a cold one in hand, anxiously waiting for a fishing rod to double over with the next big catch. Consequently, scheduling any event, meals or otherwise, revolves religiously around the changing of the tides. It’s just one of countless efforts to think like fish, proceeding with as many coinciding variables as possible. Todd and Joe have been friends longer than even John and me; secretly, my hope is that one day John and I will be just like them.

While beach passes are required during the day, as if it can’t get any better, surf fishing licenses are free in New Jersey. Fishing low tide at dusk on a summer’s eve is a spectacular affair, making it hard to discern between photographing the setting sun or paying attention to my line. A game of bocce transpires, and, having lost track, we’ll call for another round of gimlets, further distractions from the classic arts. For many years, John and I went undefeated on the bocce circuit, but as Erin and Dave will remind you, not all traditions last forever.

As beachgoers retreat from a full day on the sand, cocktails and appetizers on the deck are the next event on our daily agenda. Beer-battered striper cheeks (striped bass), shrimp, scallops and rock crab claws are among the favorites. Being John’s birthday week, the few remaining stops are pulled, and he experiments with striper cakes or ceviche.

With half-star Michelin-level cooking, the need to stray from the house or the beach is remarkably absent. Most trips out typically involve replenishing beverages, bait or food, and in that precise order. Rest assured, a majority of those activities can be performed while staying true to a strictly barefoot philosophy.

Everyone contributes uniquely to both the menu and overall beach experience. Made from scratch, my contributions thus far center on brunch. Having lived in Louisiana while photographing the oil spill, I prepare French beignets served with a freshly ground, pour-over coffee. For the full effect, imagine a warm funnel cake meets a fasnacht, covered with ample amounts of powdered sugar and dipped in said coffee. As a side, if an alternative to bacon or sausage is bizarrely considered necessary, Taylor’s Pork Roll is a distinctly New Jersey delicacy.

On a rainy afternoon, or just to wind down at the end of the day, we turn to books, magazines, movies and journals. Ginger ale replaces gin, and the house turns quiet for a moment. And, of course, no trip to the beach is complete without board games. Settlers of Catan is a favorite of ours. We aptly refer to it as Sticks & Stones, referencing resources traded in the race to build an empire, and in no way is it indicative of what transpires as the game progresses…
John is forever trying to convince me to relax, but the memories here matter more to me than any other. Ergo, you’ll often find me with a 35mm camera in hand, frequently loaded with expired film from Root’s Market for a very unpredictable look. It’s also freeing from the barrage of notifications on a camera phone to keep in the moment.

On the last Saturday of our week, hundreds of vendors set up a market on the Promenade for Summer Fest. I offer prints of the New Jersey coast, opening the door to hear how others experience this place. Every recipe for the ideal beach trip shares a similar spirit, made perfect with time, great ingredients and the best company. Together, this place becomes a welcomed extension of what we all call home.

Seek out Cameron for the latest fishing report, bait and tackle. If you are lucky, Randy will be there with a toy parrot taped to his shoulder.

The freshest seafood in town, perfect to supplement the catch of the day, or replace it if the fish weren’t biting.

A cooler full of Sierra Nevada Pale Ale and a counter topped with gin are givens. We find our ice maker gets a real workout this week, so don’t forget to stock up on ice.

A gum drop in every cone! If you’re daring, try the Pig: a whopping 15 scoops of ice cream and 10 toppings served in a trough.

Seafood Market at The Lobster House Cape May

If you’re red as a lobster from too much sun, or if it’s a rainy day, take a road trip. We like Cape May. Check out the local antiques shops and Victorian architecture while you’re in the area. 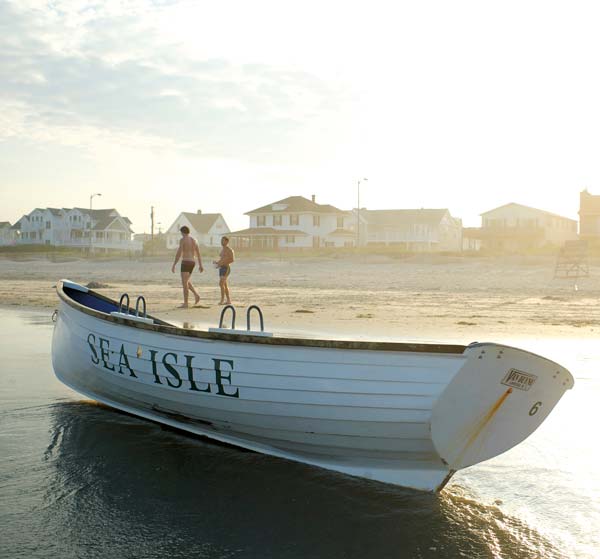