The holidays are not quite over! For football fans, January qualifies as the most wonderful time of the year. For college-football fans, this year marks a milestone: a national-championship game will be contested in Arlington, Texas on January 12 (the semi-final games will be played January 1). Also during January, the NFL will be in play-off mode, culminating with the Super Bowl being played in Phoenix, Arizona on February 1 (along with the Puppy Bowl on Animal Planet and the Kitty Bowl on Hallmark). So, put that New Year’s resolution on hold! It’s party time. Pizza, wings, subs, beer … it’s all good. Whether you’re looking to go out or host your own party, Lancaster-area restaurants, bars and grocery stores are gearing up to satisfy your cravings.

Caruso’s Italian restaurant & pizzeria has been serving pizza, pasta and subs in the county for over 30 years. The original Caruso’s opened in 1982 in Neffsville and continues at that location today.

Frank Caruso, who operates the Caruso’s location on Fruitville Pike, explains that each of the seven Caruso’s, including one in Schaefferstown, is independently owned by a different member of the family. “As family members became older, they launched their own restaurants. We pride ourselves on making the best quality homemade pizzas and breads in the area – we try to set the standard for quality for locally-owned pizzerias,” he states.
Although they share a common name and commitment to quality food, each Caruso’s has its own atmosphere. The Caruso’s on Fruitville Pike – where business is evenly split between eat-in and take-out customers — opened in early 2010, and it has a fun vibe. The black-and-white checkerboard flooring is paired with wainscoting, a warm Mediterranean yellow-orange paint and accents such as windows, shutters and window boxes. The overall feel is that of dining outdoors along a narrow Italian street. Seating is mostly tables, but there’s also counter seating in front of a wide front window. There’s a mouth-watering display of specialty pizzas near the counter where customers place their orders.

The menu features an array of items including appetizers, seven varieties of fries, fresh salads, pizza, calzones, stromboli, burgers, wraps, hot and cold subs, pasta dinners and Italian favorites. “Our entire menu is great. I love serving people what I would like to eat, and at the right price,” Frank stresses.
While pasta is popular in the winter and salads rule the summer months, Frank maintains that the popularity of pizza never wanes. Pizza is Caruso’s top-seller, especially the stuffed pizzas such as spaghetti pizza.  “When you see it come out of the oven or being served, it’s mouth-watering. Pizza is great, even if it’s just a slice, but the spaghetti pizza is really something special,” he enthuses.
Sandwiches, particularly the cheesesteak, are also popular. “You can’t go wrong with a cheesesteak that features fresh, local in-season produce and homemade bread that’s baked fresh daily,” he says with a smile.
Lasagna is homemade using a family recipe, and Frank points out that his favorite dishes – Chicken & Broccoli Alfredo and Penne Vodka – are customer favorites as well.

During football season – especially the play-offs – pizza and wings are the hands-down top-sellers. On Super Bowl Sunday, party-platters, including a make-your-own-party platter or sandwich, join the line-up as do some special items such as flower rolls. “We do have some TVs here and there are some regulars who come in to watch the games, but on Super Bowl Sunday, most people have parties of their own. That day is just crazy for us – we’re on the go all day,” Frank says.

Other restaurants and neighborhood grills to consider for Super Bowl Sunday include: 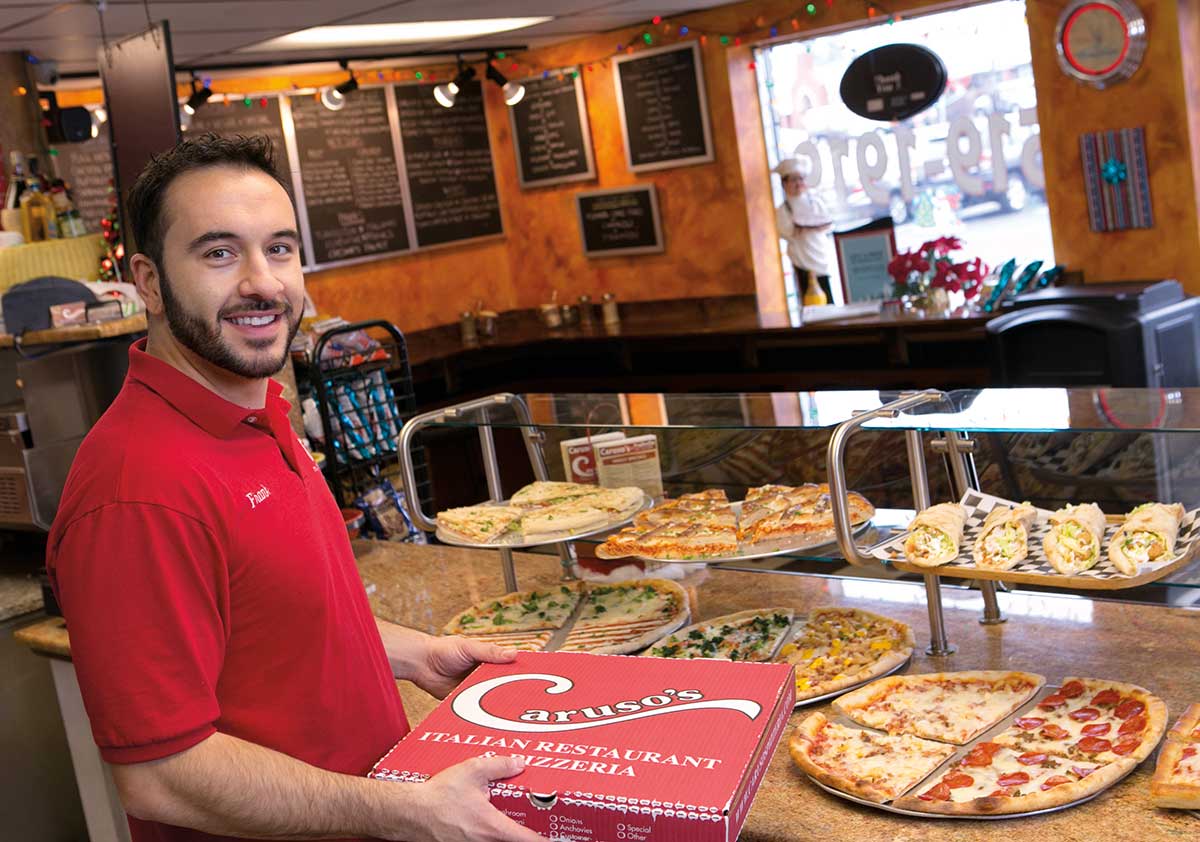