For gardeners, the mantra is “next year.” Well, if the non-stop arrival of gardening catalogues is any indication, next year has arrived!

At this time of year, I’m inclined to think back over last year’s growing season and make lists: What did I grow for the first time, and how did it do? What plants did I lose? What mainstays have continued to bring pleasure? My resolutions always include simplifying maintenance as much as possible (but does it ever happen?). And, of course, what has survived the deer browsing?
On this gardening journey, I’d like to highlight several plants that never fail to elicit comments from visitors. Let’s call them my “Wow, what is that, and can I grow it?” plants. All of these plants have done well for years in my Lancaster County acres and are available at fine nurseries. 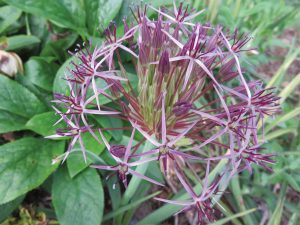 I can only grow bulbs that the squirrels don’t dig up, thus mainly daffodils and Tommy crocuses. However, in recent years I’ve tried several ornamental onions. The most impressive one has been the Star of Persia, Allium christophii. Like all alliums, it requires sandy to gritty, well-drained soil in full sun. It should not be planted in a wet spot. The basal clump of foliage withers quickly but pushes up a sturdy 12- to 24-inch stem topped with a dazzling globe of pale lavender to amethyst flower heads 8 to 12 inches in diameter. The flowers are excellent for fresh-cut arrangements; if allowed to mature in the garden, the dried seed heads are stunning in dried arrangements. I once visited a garden where the dried flower heads were spray-painted in bright colors; the effect was miniature fireworks. 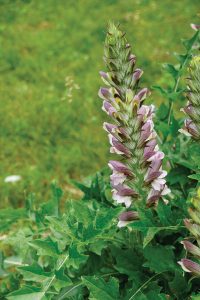 For gardeners who like plants with architectural foliage and flowers that look like snapdragons on steroids, Bear’s breeches, Acanthus spinosus, will definitely draw attention. And, “architectural” is not just a descriptive since the spiny leaves are said to be the model for the sculptured leaves that topped the Corinthian columns in ancient Greece. Bear’s breeches is not fussy about soil fertility, but be sure to plant it where you want it to establish because it will creep around in really loose soils and be hard to eradicate because small sections of root left behind will sprout new plants. The bold, deeply-cut, glossy green, thistle-like foliage produces sturdy 3-foot-tall flower spikes with snapdragon-like flowers hooded by spiny, reddish-purple bracts. It’s
very conspicuous! 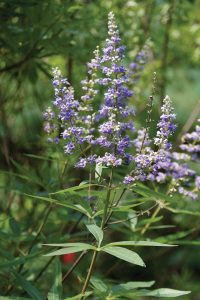 On first glance, visitors think the Chaste Tree, Vitex agnus-castus, is a large butterfly-bush (Buddleja davidii) because the flower spikes are similar. However, I strongly recommend against planting butterfly-bush unless you are prepared to remove all the flowers before they produce seed. I have banished it from my garden – it was coming up everywhere, even in the cracks between pavers. Besides, butterfly-bush is now on the invasive plant list of several states.
The chaste tree is a much better plant for several reasons. It is actually a deciduous shrub that dies back to the ground most winters in our area. It should be pruned back to the lower buds in early spring and will push up as much as 4 to 7 feet of new growth by high summer. The plentiful, showy loose panicles of violet-blue flowers – there is also a less-attractive white cultivar – begin to form in early summer and continue through the heat of the season and into fall. It will be covered with butterflies. The grayish-green leaves with five to seven lance-shaped leaflets are fragrant, reminiscent of lavender. There are no pest or disease problems. Deer do not touch it! 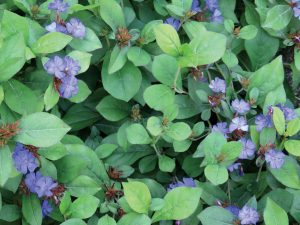 A ground-cover and edging plant that grows throughout my borders is Plumbago or Leadwort, Ceratostigma plumbaginoides. This versatile plant deserves to be more widely planted. It is far more interesting than vinca, pachysandra or English ivy, although it is not evergreen. It is an easily grown, mat-forming perennial that spreads by underground rhizomes. Little clusters of gentian-blue, five-petaled flowers appear above the 6- to 10-inch foliage over a long summer to frost bloom period. After that, the shiny green leaves turn bronze-red in autumn.
Plumbago is perfect for interplanting with spring bulbs because the foliage emerges late as the bulb foliage is dying back. It is also ideal as an underplanting for shrubs and in rock gardens. Do not plant it in a wet, poorly-drained site. 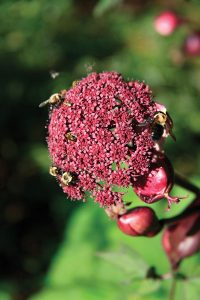 Angelica gigas, known as Korean angelica or Giant angelica, cannot possibly go unnoticed in the early fall garden. Everyone will say “What is that?” of this strange and darkly alluring plant.
This self-seeding biennial (blooming the second year with only foliage the first) will grow to a height of 4 feet in part shade. It freely branches and often spreads 3 feet with burgundy stems and deeply cut, bold-green foliage. The deep-plum-colored round buds that look like clubs open into extraordinary domed flowers that are often 8 inches across. It will self-seed generously (the seedlings are easy to identify and rout out). I have noticed it is typically pollinated by white-faced hornets, which fortunately seem to be more interested in the flowers than anyone nearby. In Korea, the dried roots have been considered a medicinal herb for thousands of years. 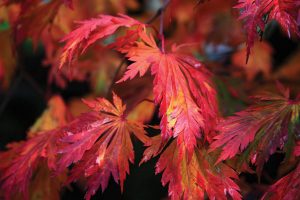 No matter how glorious the fall foliage display, the tree in my garden that draws the most attention is the Fernleaf Full-Moon Maple, Acer japonicum ‘Aconitifolium’. It is a low-branched tree that grows slowly to 10-feet high with an 8-foot spread. Its “full moon” shaped, deeply cut, medium-green leaves explode into intense deep crimson in October. The fall color is reliable and stunning. It is one of the best small trees you can grow. 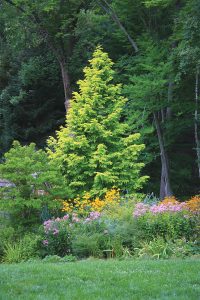 The Asian dawn redwood, Metasequoia glyptostroboides, is a fast-growing – 4 feet per year – large landscape tree that is seen throughout Lancaster County on larger properties. As it matures, it displays deeply fissured bark and a broad trunk that develops elaborate buttressing. The deep-green foliage turns red-bronze in fall.
Available but seldom planted is the cultivar Metasequoia glyptostroboides ‘Gold Rush’, also called ‘Ogon’ (pictured). It grows somewhat slower than the species, typically reaching 10 to 15 feet over the first 10 years. Its fern-like foliage is distinctively gold-yellow throughout the summer. The fall color is orange-brown.
Dawn redwoods tolerate wet soil, clay soil and air pollution. The gold foliage shows up especially well when the tree is positioned in front of a grove of deep-green conifers like Norway spruces. 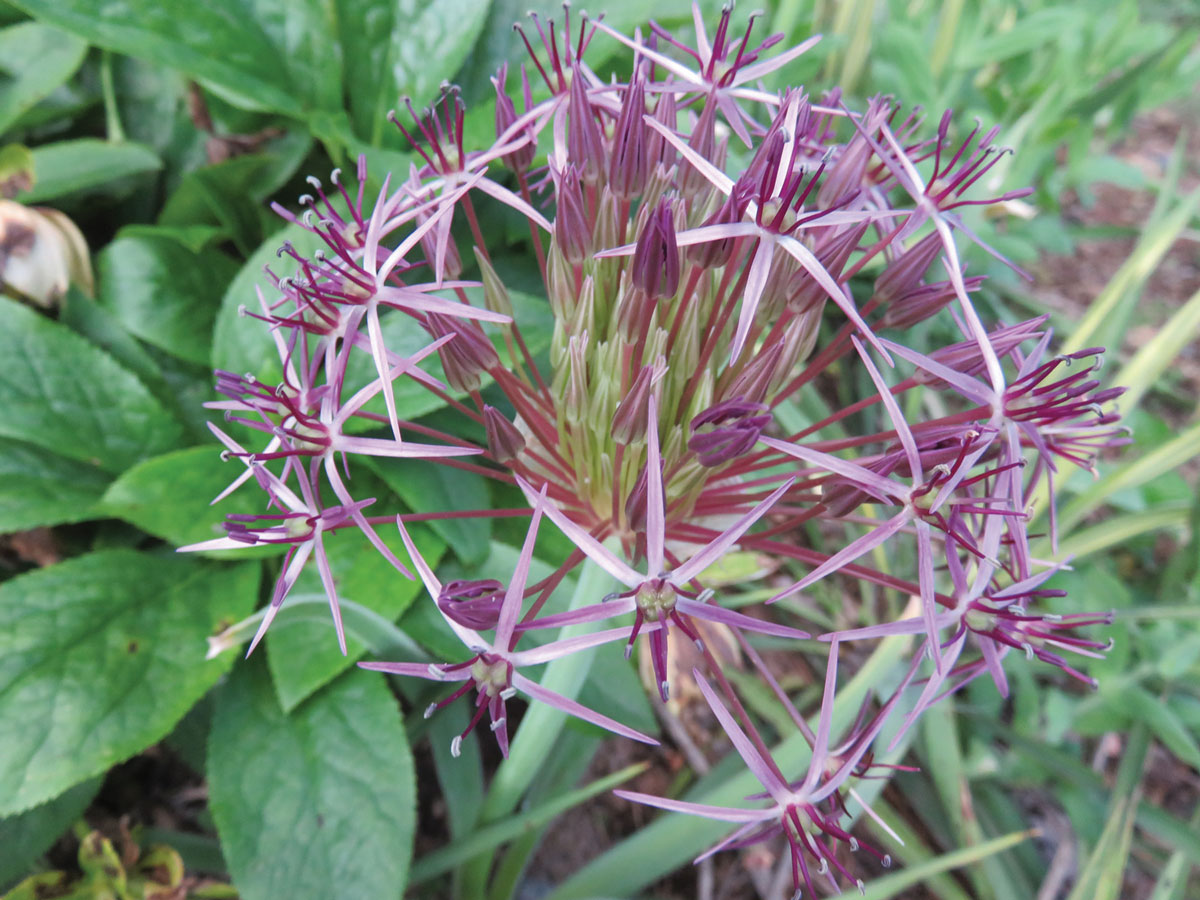