Many of us recall the iconic polo match scene from the 1990 movie, Pretty Woman, starring Julia Roberts and Richard Gere, like it was yesterday. Vivian’s lovely brown-and-white polka dot sundress, the divot-stomping, the fancy hats and flutes of champagne glistening in the sun. Little wonder, then, that Michael Colosi saw the potential for a birthday celebration for his wife, Heather – set on the sidelines of a local polo match – that would invoke the light-hearted fun and glamour of that memorable scene.

“All I really want is a grown-up slumber party with my closest girlfriends,” said Heather Colosi of celebrating her 40th birthday. And, she got her party, munching on junk food with her BFFs in cozy pjs, sipping cocktails and sharing laughs well into the wee hours. Little did she know it was a decoy party to throw her “off the scent” of the real party that her husband, Michael, was planning for the following weekend: “The slumber party gave me the opportunity to throw a bigger party to celebrate with all the people who care about her,” he explains.

Michael wisely formed a committee to help him plan the big party, including Heather’s three sisters, her two closest girlfriends, mother and mother-in-law, and even her 9-year-old twin daughter and son. Everyone was sworn to secrecy, and even the kids kept it mum. The committee chose the Forney Polo Field in Rothsville as the venue, and inspirations from the Pretty Woman movie quickly followed – from the polka-dot invitation to the white-over-mocha layered table linens and the tan-and-white café chairs under the tent.

Heather commemorates the occasion with her husband, Michael, their children, Remy and Michael, and his parents, Marc and Geri Colosi.

Prosecco was on ice to toast Heather’s milestone birthday.

Even the youngest guests showed their style for the all-ages party.

Heather’s parents, Craig and Kathy Warwood, and other family members were on hand for the party.

Under the guise of attending a sponsor’s party for the local polo association, Heather was persuaded to don a hat for the Lancaster Polo Club’s – fictitious – hat day competition. Arriving at the polo match, Heather was instead met by 100 friends and family members, a feast of her favorite foods, and the honor of presenting the Heather Colosi Cup to the winning team, sponsored by the party host. “I felt like the most special person,” Heather remembers, after recovering from the initial surprise. “I felt so valued.”

Catered by FENZ Restaurant, the buffet featured an assortment of family-friendly foods that were also elegant yet unpretentiously at-home in a picnic setting. Crispy buttermilk fried chicken played well with a garlic-and-rosemary roasted pork, which was served as a mini-slider with aged provolone and broccoli rabe – one of Heather’s favorites from the Reading Terminal Market in Philadelphia. An olive oil and lemon-based potato salad complemented the Nicoise-style Caesar salad, dressed with the traditional tuna, olives, blanched green beans and hard-boiled eggs. The warm summer day was made for a light salad of in-season tomatoes, cucumbers and garbanzo beans, and a savory charcuterie board. A signature cocktail featured the popular liqueur of the summer, Aperol, in a refreshing spritzer.

The icing on the cake was literally no cake at all, but a buffet of Heather’s favorite dessert – pie! Luscious peach, blueberry, sour cherry and lemon buckle – topped with candles – and the usually low-key birthday girl was transported to indulge-me-it’s-my-big-day heaven. Score one for the party committee! 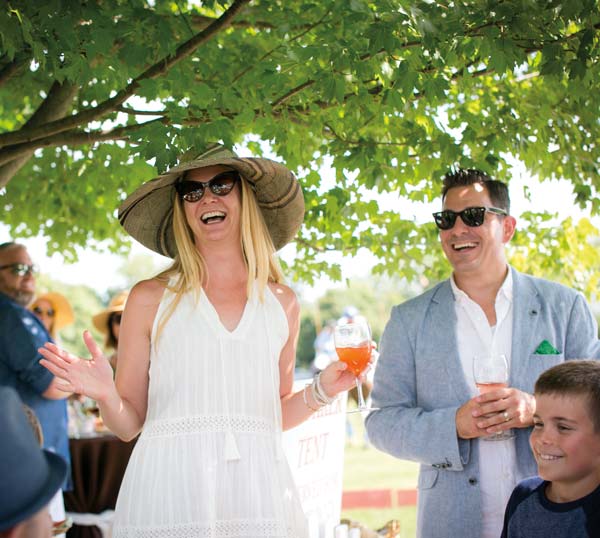