Can you name a group of plants that provide non-stop color from early spring until frost, are easy to grow, need sowing just once, and are irresistible to beneficial pollinating insects in your garden?

If you answered self-seeding annuals (or biennials), you’d be correct. These plants scatter copious amounts of seed into the soil and return every year without fuss, germinating, flowering, seeding and then doing it all over again. They often pop up in places you hadn’t expected.

This is the time of year for gardeners to collect and exchange ripening seeds with fellow gardeners and scatter them here and there for next year’s display. Once you learn the behavior of these plants you will know which ones can be left on their own and which will need some thinning. Some of the seedlings are easier to spot and distinguish from weeds than others.

Self-seeders will not do well for those whose idea of gardening is a uniform 3-inch layer of mulch throughout their borders or for those who use pre-emergence herbicides.

The “old-fashioned” self-seeders I’m recommending have simple and single flowers, rather than the intricate doubles of many modern cultivars. Single blooms allow bees, butterflies and other insects better access to pollen and nectar, which are often, along with scent, absent from multi-petaled blooms. These same plants are great fillers in spots where perennials didn’t return. (I’ve listed them more or less in their onset of bloom).

It is also called cornflower because it was often found as a “weed” in corn fields. But we celebrate it for its enchanting blue color and its ability to blend with other so-called wildflowers in a meadow setting or in a more formal design. A cool-season annual, it blooms from late spring into July, is very drought tolerant and attracts butterflies. Birds love the seeds. Although native to Europe, it has become naturalized throughout much of the U.S. 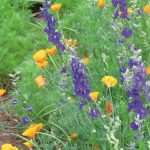 This is an easily grown cool-weather annual. It blooms from late May and into June in a well-drained sunny area. The showy delphinium-like spikes of flowers are blue, pink and white above deeply cut leaves. It is a natural for cottage gardens, and I’m told it makes a nice cut flower. Note: The leaves, flowers and roots are toxic if ingested. 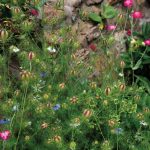 A real charmer, this flowers in late spring while it is still cool; I like the blue ‘Miss Jekyll’, but there are mixed selections in white, pink, rose and purple. The flowers float over a 1-foot-tall bed of lacy “misty” foliage. Plants self-seed reliably or you can sow seeds in spring as soon as the soil can be worked. Reseeding can be done up until mid-summer. Not only are the flowers unusual, but the post-bloom quirky, egg-shaped, horned seed pods are equally ornamental. These dried-seed capsules are great to add to dried-flower arrangements. 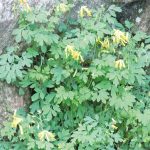 Corydalis thrives as a ground cover in a shaded woodland or in a cooler spot by a stream. It also is an ideal plant for “pockets” in old stone walls or foundations. The mound of fern-like, medium-green foliage produces bright-yellow, short-spurred flowers over a long May-to-September bloom period. It self-seeds vigorously. 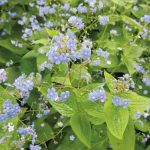 These sweet pale-blue flowers with yellow eyes always appeared on Valentine’s post cards in your grandmother’s time. These cool-season flowers bloom from spring to early summer. A natural for cottage gardens, they will also naturalize beside a tiny stream or pond. Plants will persist in the garden for many years by vigorously self-seeding. They’re very nice in a woodland area interplanted with spring bulbs. 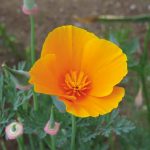 This poppy blooms in early summer with delicate clear-orange and orange-yellow 4-petaled flowers dancing above gray-green, fern-like foliage. It is a great edger in full sun. As it requires good drainage, it does well in sandy and poor soil, as well as rock and gravel gardens. Seeds can be sown in fall or early spring. I remove spent flowers to extend the bloom period but eventually leave some flower heads to self-seed. It is the state flower of California. 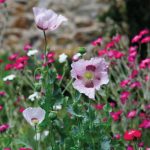 This cool-season poppy has beautiful blue-green stout lettuce-like leaves that clasp the upright stems. The fat buds nod downward but become erect as the flowers open. The flowers appear in early summer in shades of pink, red and lavender. The usually single flowers have a dark blotch at the base. As the petals fall off, an oval capsule forms that contains hundreds of seeds. Little vents appear at the top of the capsule that allow the seeds to disperse. These ornamental seed capsules are terrific in floral arrangements. Sow seeds directly in well-drained soil in full sun. 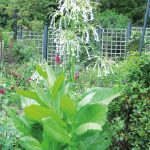 There are lots of nicotiana cultivars available nowadays in pastel colors. Most, however, have lost the charm, aristocracy and strong fragrance of this tall (up to 5 feet) shade-tolerant plant with its loose clusters of long slim drooping white flowers. (Each head of flowers resembles a graceful explosion.) Put it near your patio or entrance where you can enjoy the fragrance that’s most prominent in the evening. This is a hummingbird and hummingbird moth magnet. Although the coarse leaves look similar, this is not the species cultivated for smoking tobacco. 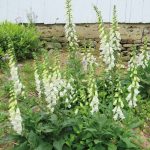 This is a biennial, which means it will germinate and produce a basal rosette of leaves during the summer and autumn and then remain over the winter to start growing again and produce its flower spike in the late spring of the second year. It prefers rich moist soil in part shade. The spent flower spikes are not very attractive but if some are left in place, digitalis will freely self-seed. The funnel-shaped flowers are closely grouped along the spike and can be rose-pink to purple or white. Plant leaves are a source of the heart drug digitalis and are highly poisonous. 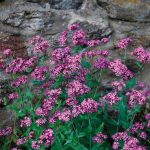 Completely undemanding, I like silene for the rounded clusters of hot rose-pink to magenta-pink flowers. It prefers average or sandy and gravelly well-drained soil in full sun. It flowers June into July, unless it is unusually hot and humid. 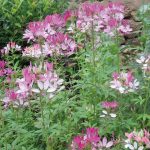 Spider flower puts on a show from early summer through the growing season until frost in full sun. The pink, purple or white flowers attract butterflies and hummingbirds. It is easily grown in average soil. Collect seeds from plants in fall for planting after spring frosts or allow to self-seed. If too many seedlings appear, they are easy to identify and thin out. Admittedly, some gardeners find the aromatic sticky and spiny foliage annoying. Since the plants can often be 3-4 feet high, this annual mixes well in shrub borders or massed as a screen. Spider flower cross-pollinates, ensuring you will get a new mix of colors each year. 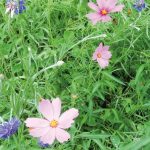 Butterflies, bees and other pollinators will be attracted to the delicate pastels of the daisy-like flowers on this low-maintenance beauty, which blooms all summer until frost. Taller varieties do well massed to provide support for one another during strong winds. Again, removing spent flowers will prolong bloom, but be sure to leave enough flower heads for self seeding. Great in mixed beds and cottage and wild gardens. 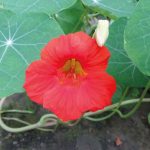 This old-fashioned annual, which is available as a bushy or climbing selection, is covered with red, orange, yellow or cream-colored flowers all summer in full sun. It prefers average to poor soil, but it will suffer if there is a long stretch of high temperatures. Sow the seeds just after the last frost in spring. Established plants will self seed. It’s very effective in rock gardens, climbing over a wall or massed as a ground cover. Except for the roots, all plant parts (leaves, buds, flowers, pods and seeds) are edible; the peppery flavor makes a great addition to summer salads. 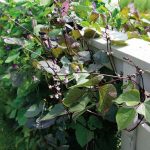 This twining tropical vine, which is native to Africa, is well-named. The flowers, stems, seed pods and undersides of the trifoliate leaves are all purplish in color. The flat glossy purple seed pods contain black and white beans that are edible but need to be fully cooked in two changes of water (it’s probably better to save them for planting next season or share them with others). Incidentally, be sure to provide a sturdy support because the vine can grow more than 15 feet and, with its flowers and bean pods all displaying at the same time, it can be rather heavy. Consider using it as a privacy vine for porches or even as a ground cover, although some country critter has eaten mine. 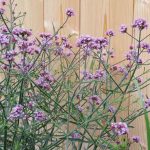 This is perfect for interplanting because it sends up long, branching stalks (up to 4 feet) topped with tight clusters of lavender-purple flowers that sway in the breeze, adding motion to the garden. This butterfly magnet blooms from June until frost. It self-sows freely but emerges late. Do not mulch!

I’d encourage you to plant more of these returning annuals in your borders. They will provide continuous color as your perennial flowers appear and fade. And, not only are you getting plants for nothing, but they will often surprise you as they appear in interesting places creating delightful plant combinations. 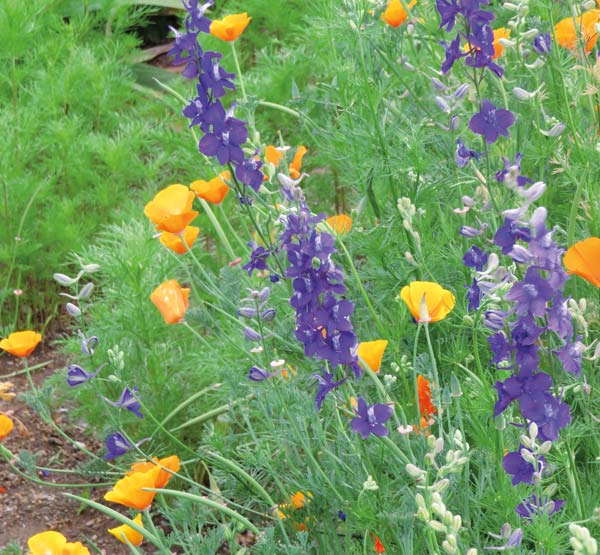