Prior to the start of a home game on a sweltering June afternoon, I was scheduled to meet up with Cylo, the Lancaster Barnstormers’ mascot, outside of the main entrance to Clipper Magazine Stadium. I waited to get his attention as he shimmied and shook, twirled and twisted, over and over again to get the perfect take for a TikTok video. 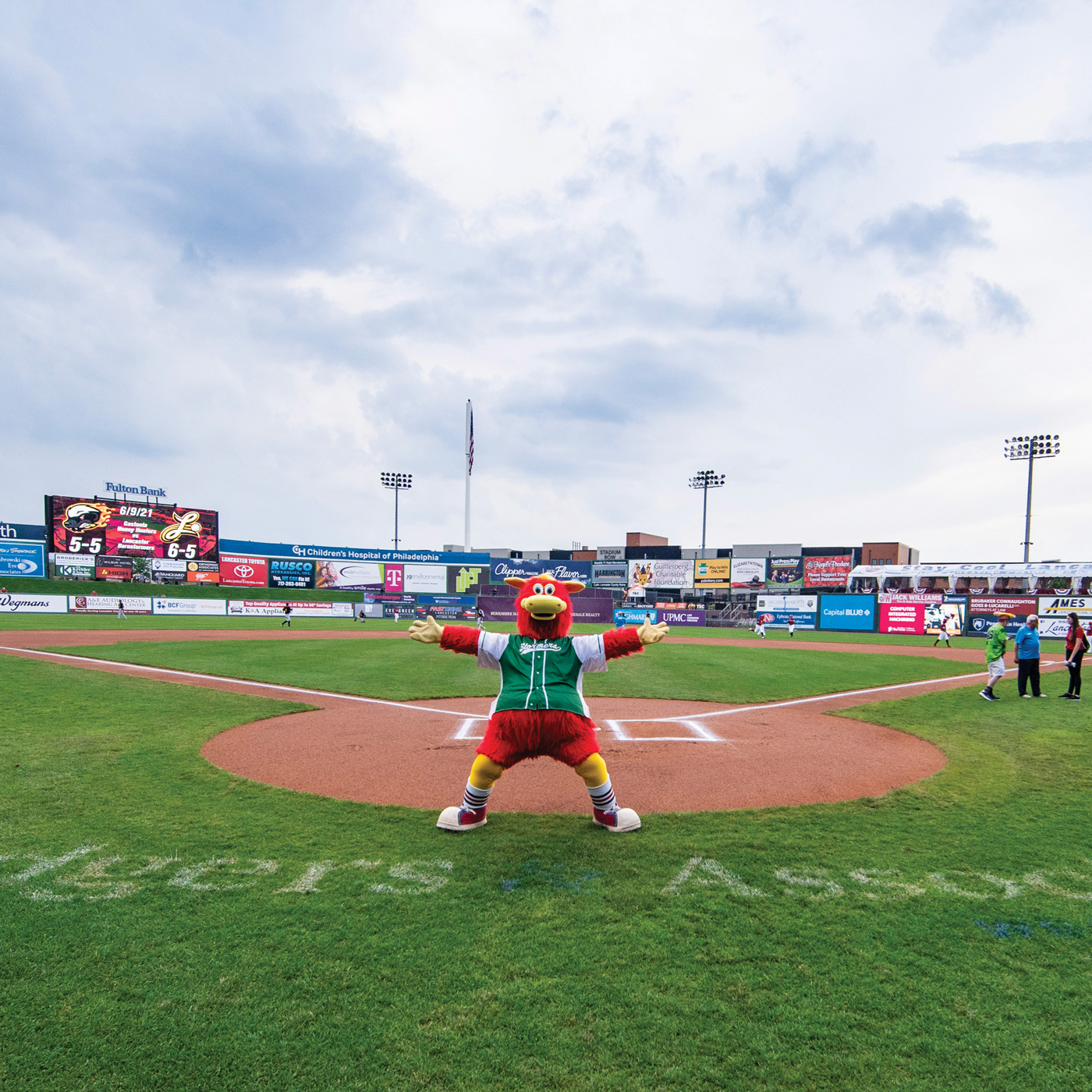 As Michael Upton discovered, keeping up with Cylo on game day is a feat in itself – the mascot is always on the moo-ve.

My assignment was to shadow the bovine-inspired mascot for the afternoon and learn what goes into being the living symbol “en caricature” of an Atlantic League baseball team. Cylo, who claims to be a “distant relative” of the Phillie Phanatic, was accompanied by the Barnstormers’ marketing coordinator, Carlynn Adams.

At first sight, there is a lot of dancing. And, as I soon learned, Cylo is a bit of a perfectionist. After getting one video exactly right we headed out into the full sun atop the home team dugout for several takes and retakes of other dance routines.

Once satisfied, Cylo gave a silent thumbs up of approval to Carlynn who, by now, had amassed a series of videos that will eventually appear on the team’s social media pages.

With two-and-a-half hours to go until the first pitch is thrown, Cylo heads to his private break area, while I make my way to the press box. We will meet up later for the pregame staff meeting. Until then, Cylo just needs to cool down.

5:00 With a 6:30 p.m. game time, the production crew and members of the Storm Squad – the fun-loving group whose members run all the between-inning promotions – gather in the press box to go over the evening’s activities. 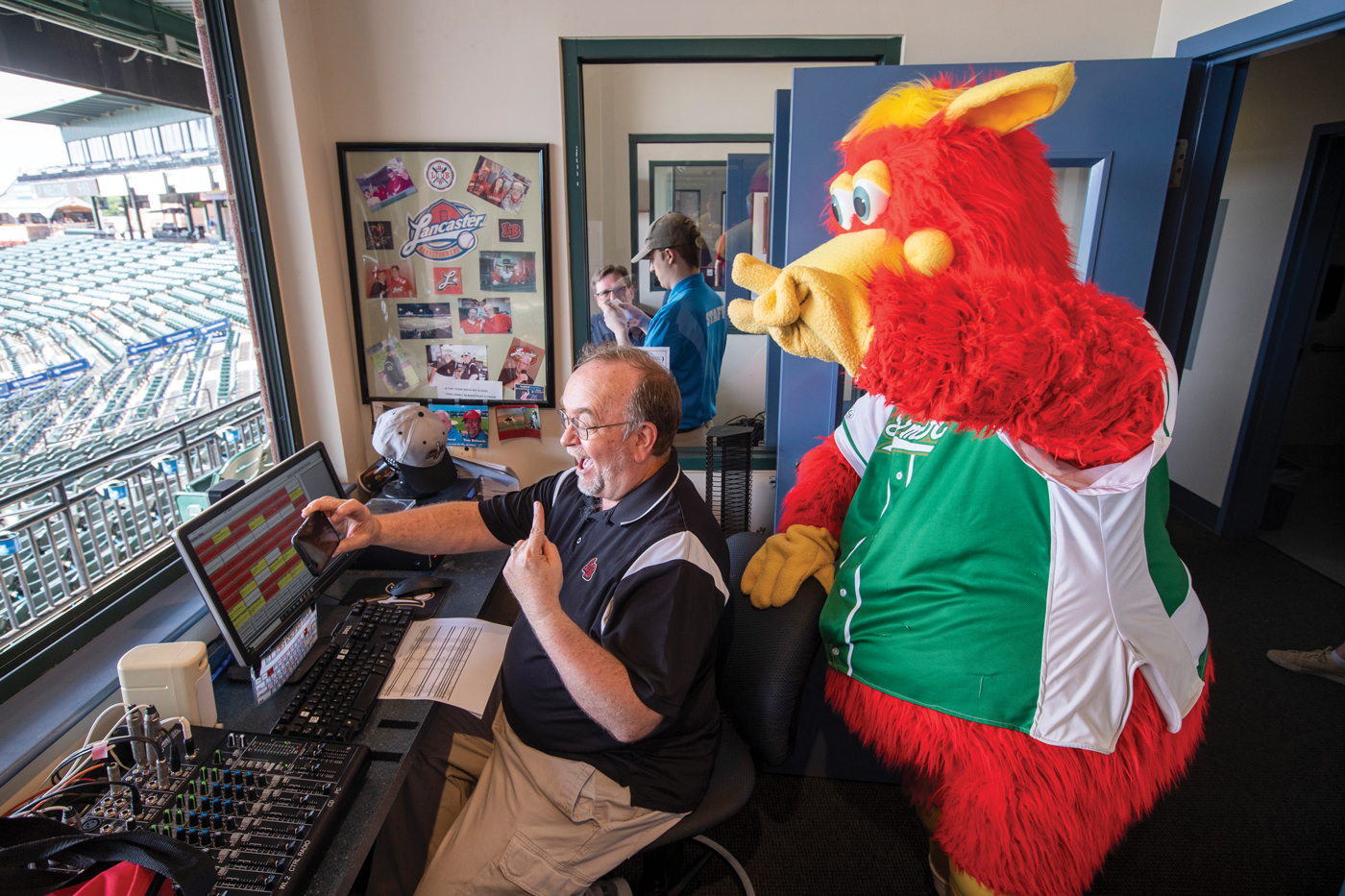 Cylo checks in with the game announcer.

Cylo appears several minutes early and decides to harass – or, I mean, help – the game announcers who had just been handed the game-day lineup for this matchup between the Barnstormers and the Gastonia Honey Hunters (whose mascot, a honey badger, is back home in North Carolina). Microphones are adjusted – Cylo’s big yellow hands had rearranged them before he moved on to posing for pictures.

The meeting covers the evening’s fan interactions, first pitches, games and prizes, as well as comprehensive camera angles and desired shots. Videographers try desperately to pay attention as Cylo listens not so intently.

The role of Cylo’s handler is performed by a different member of the Storm Squad each game; tonight the honor goes to Jimmy Childs, whose job could best be described as part fuzzy-cattle wrangler and part bouncer. 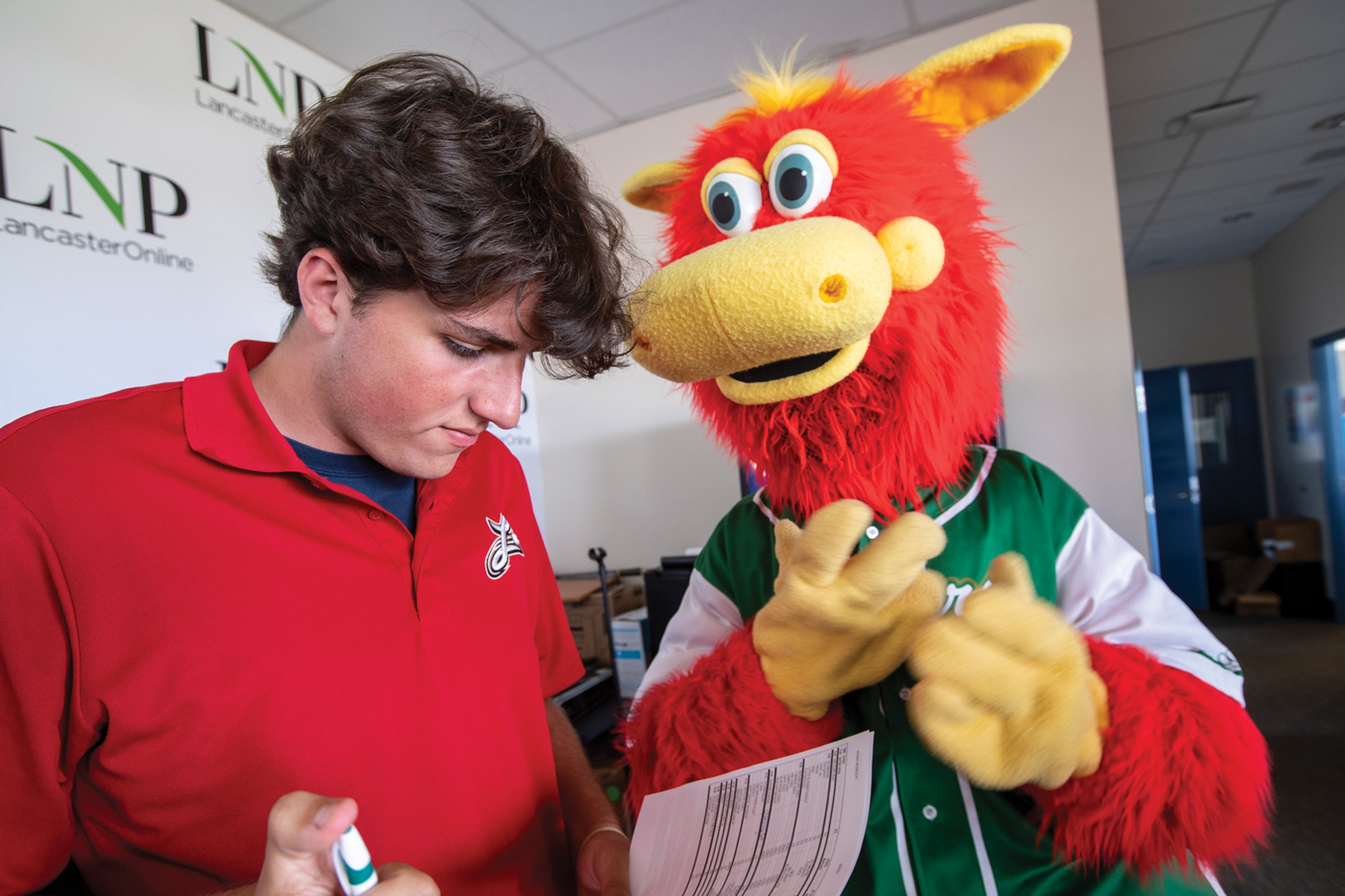 Discussing the night’s activities with a member of the Storm Squad.

5:20 As soon as the meeting ends, Cylo heads to the front gate where waiting fans receive high fives and photo ops. The kids get plenty of hugs. Slipping through an opening in the gate and into the stadium concourse, Cylo spots a table set up for Bark in the Park night and helps himself to a few dog treats from the evening’s sponsor, Pet Supplies Plus. It was at this moment that Cylo realizes he does not care for dog treats. A few minutes later, the gates open and fans stream into the park. Cylo jams out to AC/DC as music roars through the stadium’s sound system. 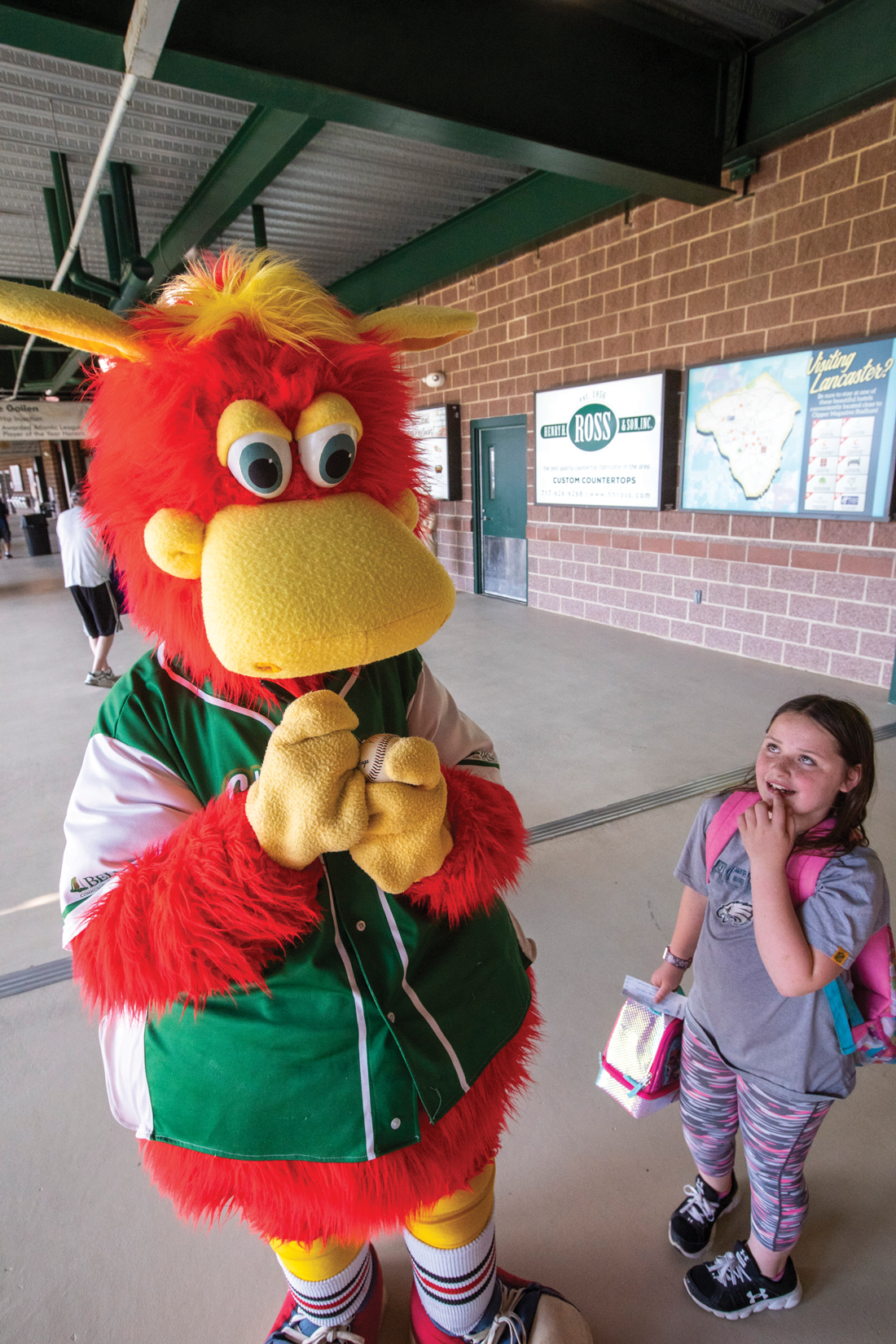 Autographing a ball for a young visitor.

5:31 We run into Carlynn who has brought her dog, Foster, to Bark in the Park. Cylo decides he would like to take Foster for a walk and commandeers the leash from Carlynn. Foster is not keen on a 7-foot-2, 356-pound, fuzzy cow-thing being on the other end of his lead. So, Cylo returns the docile pooch to Carlynn and turns his attention to the concession stands. He takes a pass at running the register, which I assume does not go well. The food-service workers smile and politely urge him along and Cylo is quickly met by an autograph-seeking fan, followed by more hugs for families, and even more high fives. 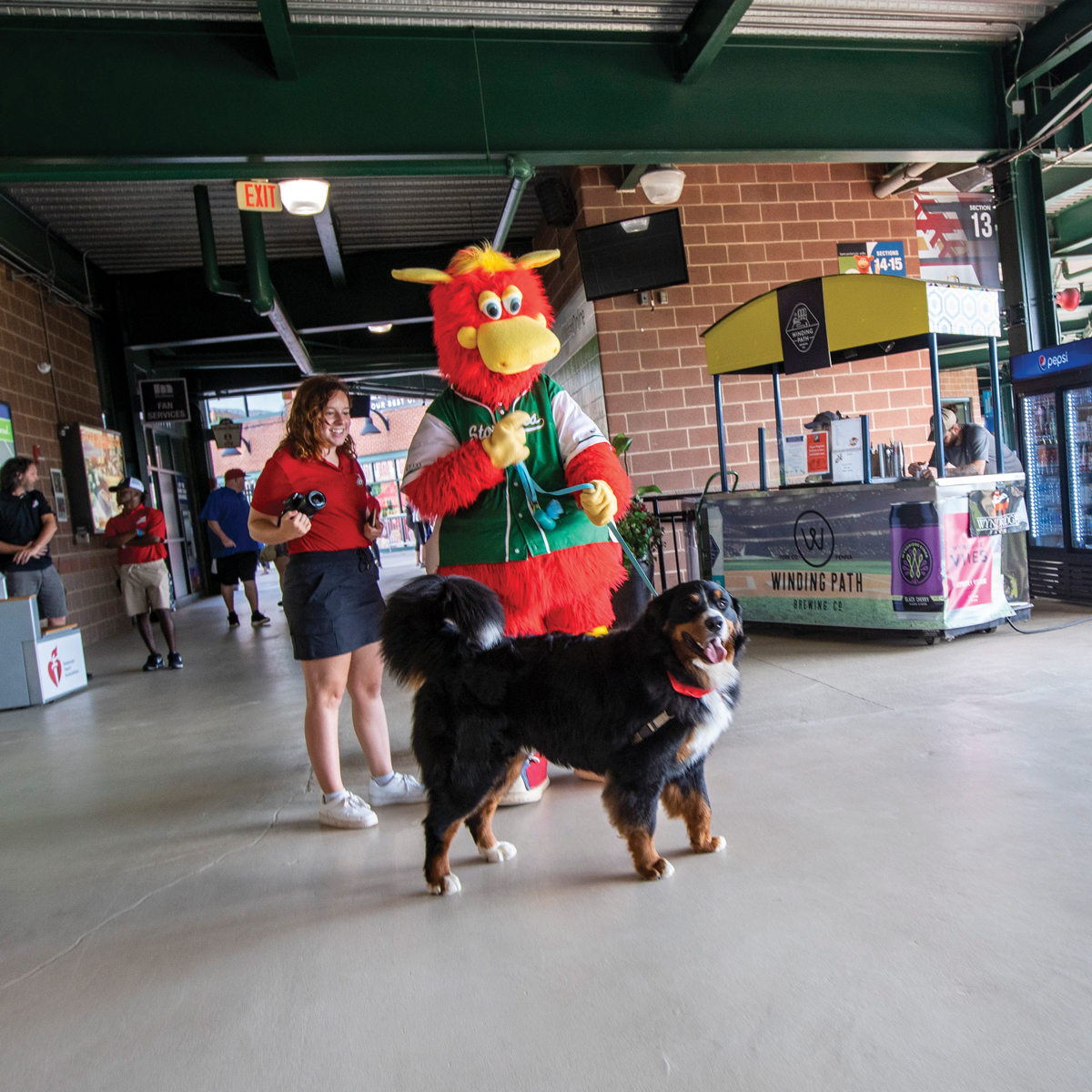 Greeting a four-legged visitor who arrived for Bark in the Park night.

Passing back by the main entrance Cylo spots a claw machine and tries to win a mini-sized, stuffed version of himself. At the third base concession stand he treats the workers to cartwheels, which they practically ignore. Cylo will have none of this and waves his hands above his head to get their attention, pops the international sign for “just wait” by holding up one thick, yellow finger, and then does another cartwheel. This time, the employees cheer his skill. Now satisfied, Cylo heads back towards the main entrance. 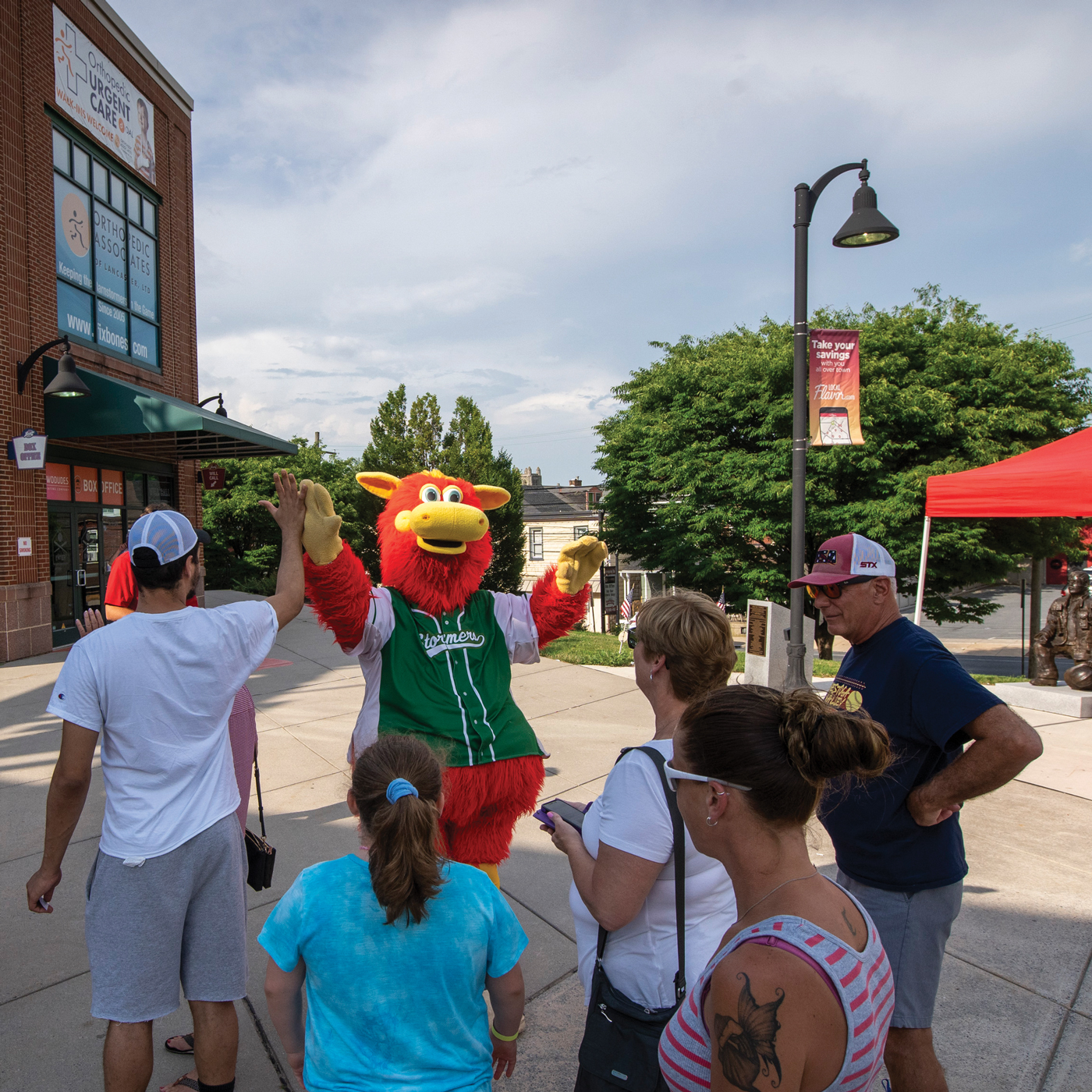 5:40 At the main gate there is time for a little calypso with Jump in the Line (Shake, Señora) and a few more fan photos until it’s time for Cylo to make his way down to the field. The grounds crew needs a hand. At least that is what Cylo thinks, but the water hose will not work. I’m kind of glad because I’m pretty sure I would have ended up soaked. After failing to convince the crew to turn on the water, Cylo heads into the seats for a quick dance session before returning to his private break area, a cool, small Cylo-cave located just off the concourse. 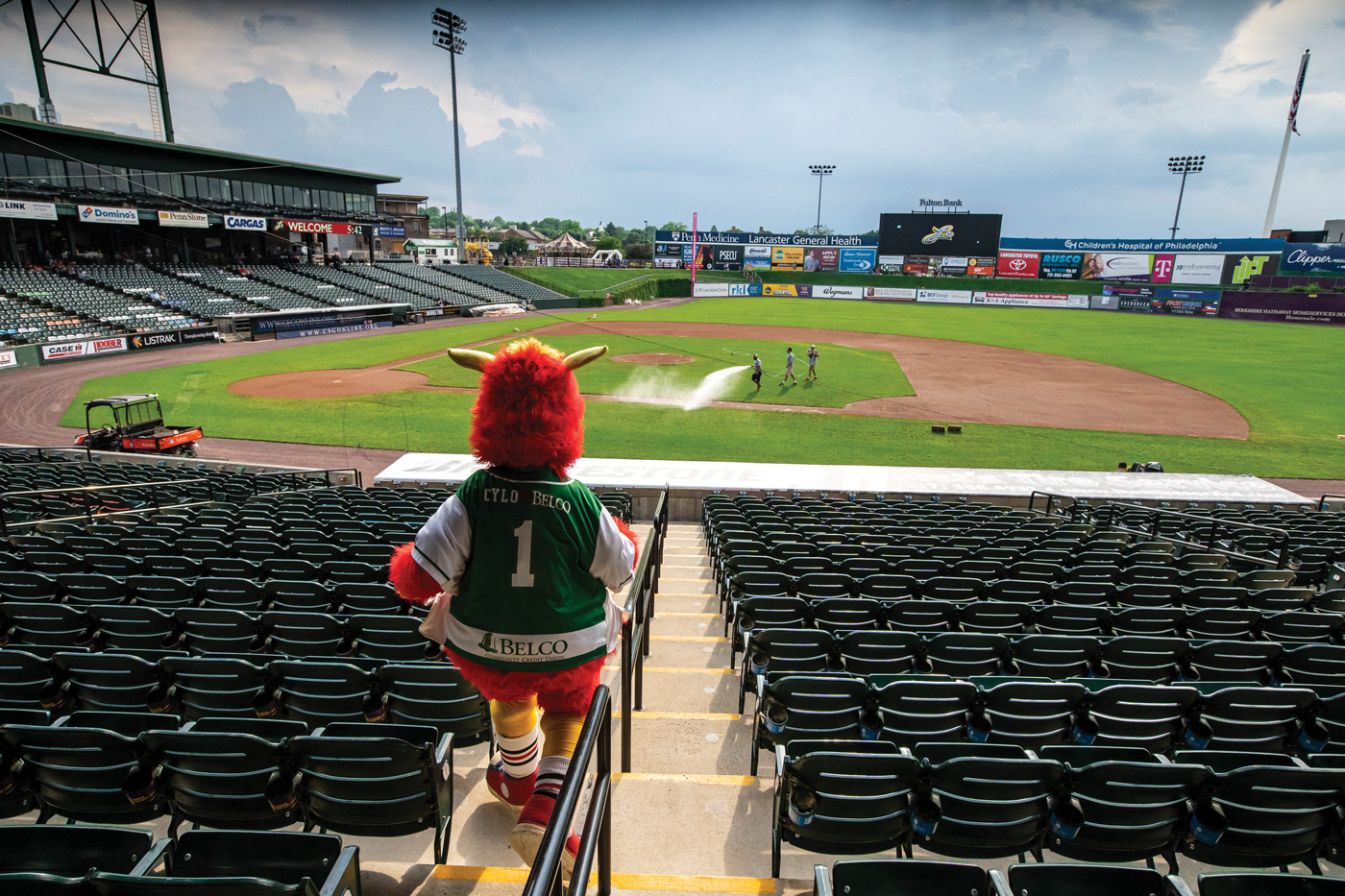 Cylo heads to the field to assist the groundskeepers.

6:01 With his 15-minute respite over, it’s time for Cylo to return to the field and meet up with representatives of the county’s youth sports teams in attendance for special recognition. He leads the group on a march around the bases and afterwards poses for team photos. 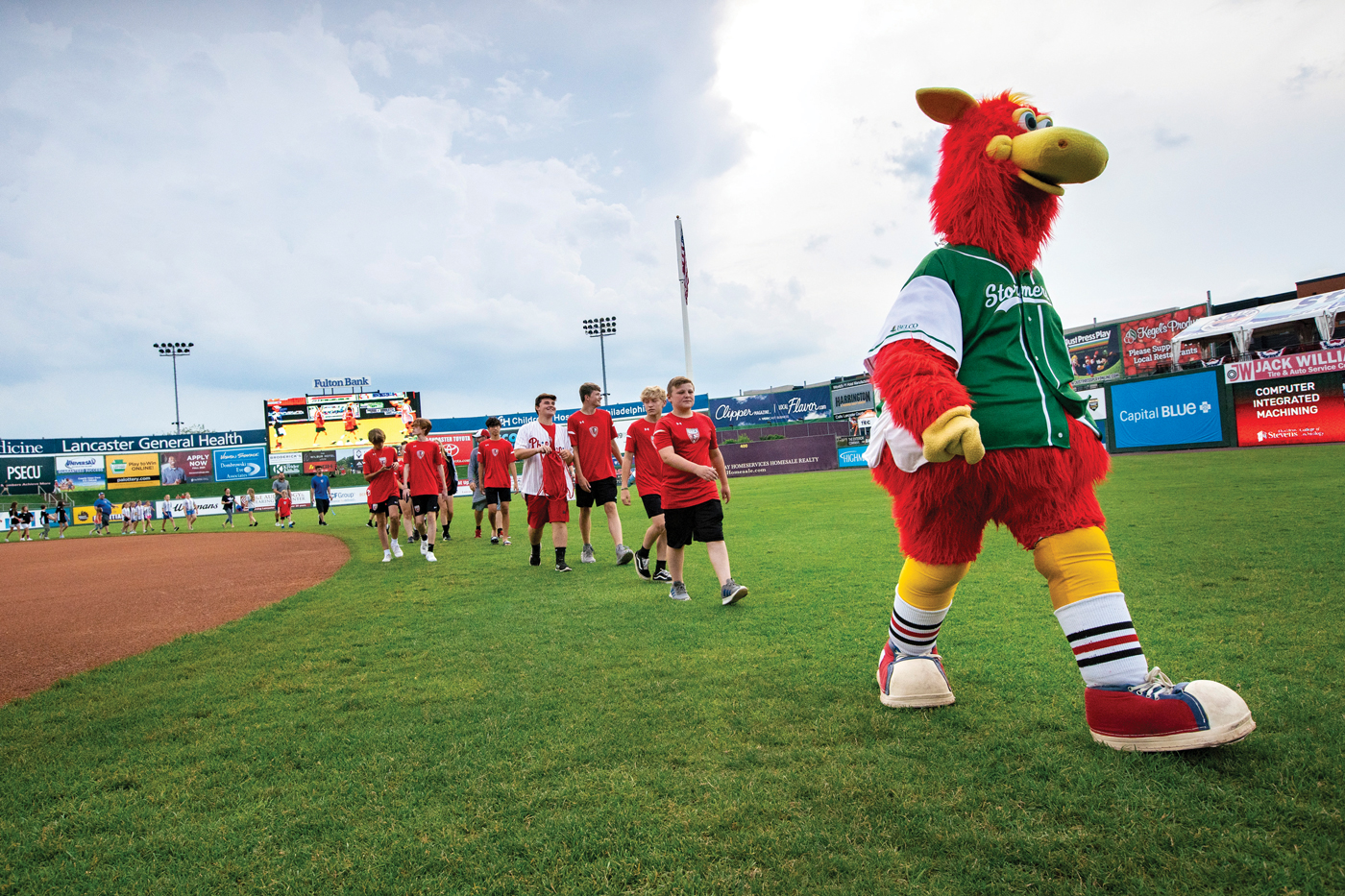 Leading the parade of youth sports teams being honored before the start of the game.

Thirteen minutes later, Cylo is officially introduced to the crowd and he waves from a spot beside the Barnstormers’ dugout. He gets a few minutes to relax with the team in the dugout before the national anthem strikes its first note; after the patriotic display he heads back up to the concourse. There is just enough time for a hug and a hello to some special fans before the first pitch smacks into the catcher’s mitt. 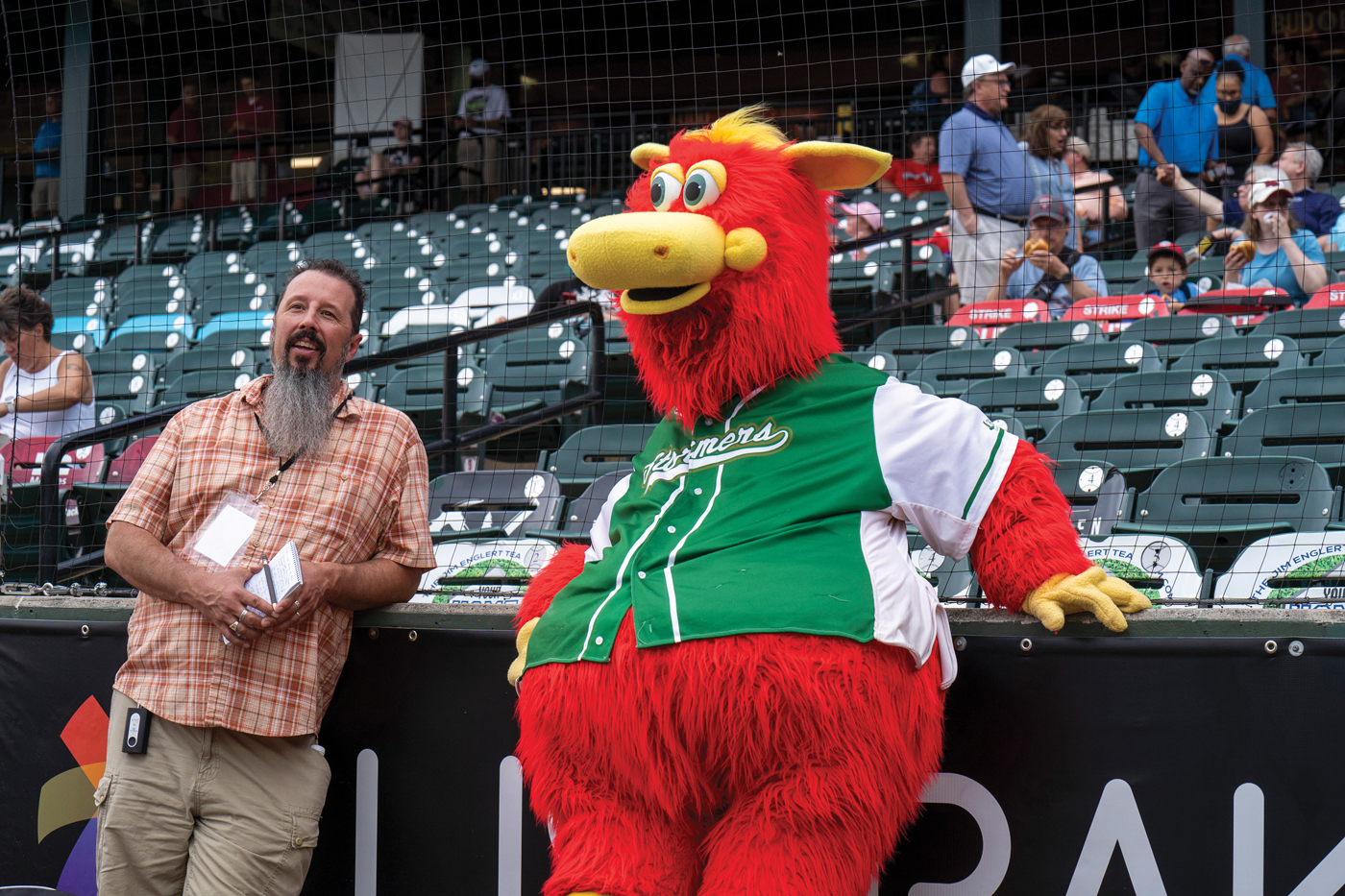 Cylo being interviewed by Michael Upton.

It’s time for another break. I could use one as well. It’s exhausting to try and keep up with the fleet-footed (or is it hooved?) fan favorite during his pregame routine. Cylo gets back to work – there are plenty of places around the stadium that need to be graced by his presence before the evening is through. 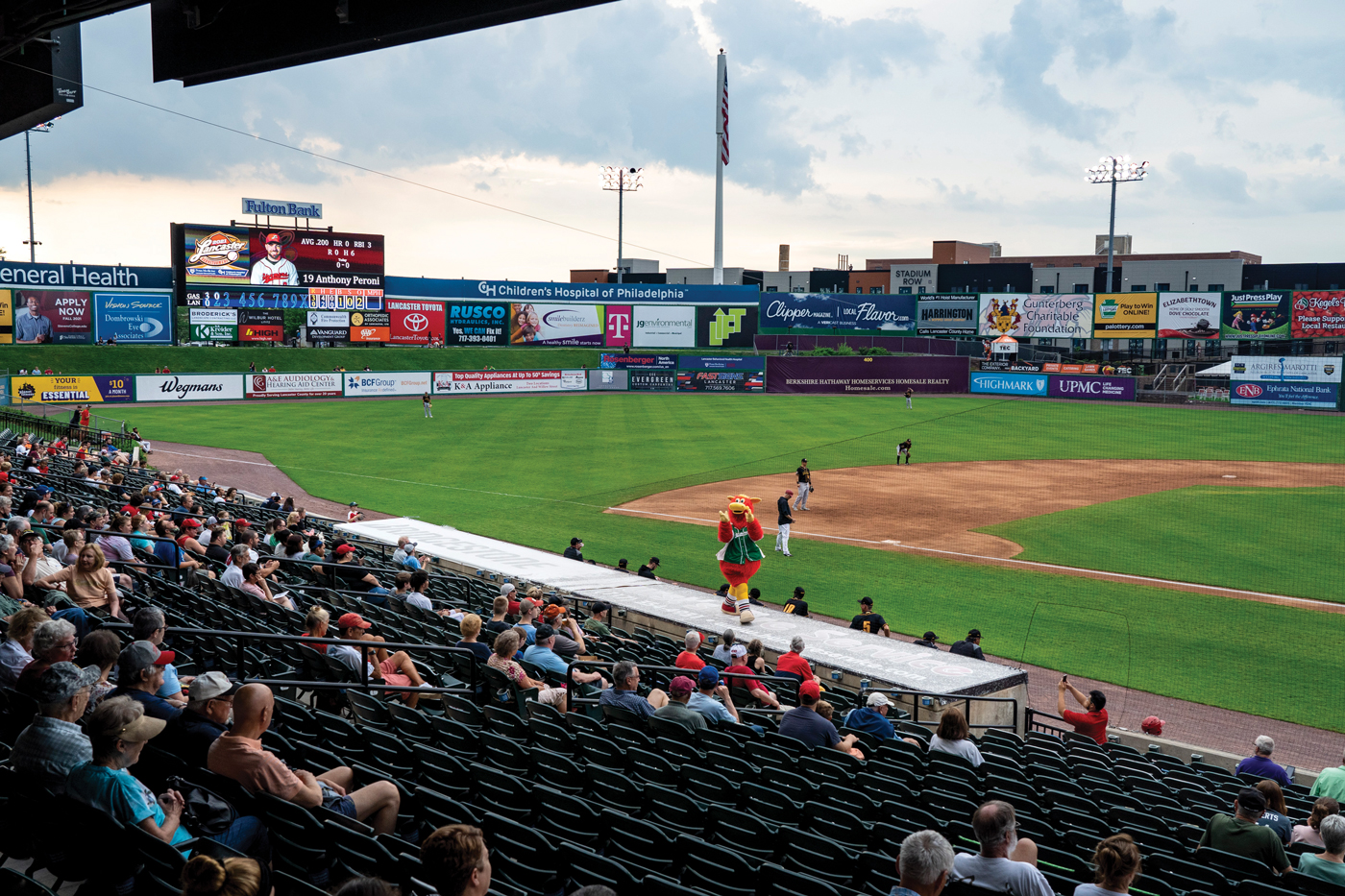 Leading the cheering section from atop the Barnstormers’ dugout.

MLB’s Best Mascots According to ranker.com

Cylo being interviewed by Michael Upton.