At this time of year, when I hear of 6-year-olds telling Santa they’d like to find T-rex action figures under their holiday trees, I’m reminded that there are different types of conifers in existence that predate even the dinosaurs.

You read that correctly. There were conifers on the planet even before the first flowering plants appeared. (Those would be magnolias, since you asked.) And, they definitely don’t look like the familiar conifers – pines, spruces and firs – that deck the halls around Lancaster County at this time of the year. Unlike those evergreens, prehistoric trees don’t have “needles” and they are deciduous, in that they drop their leaves after a fall color display just like your maple shade tree does. They also display other seasonal changes in the garden, including interesting winter silhouettes and fresh spring growth. 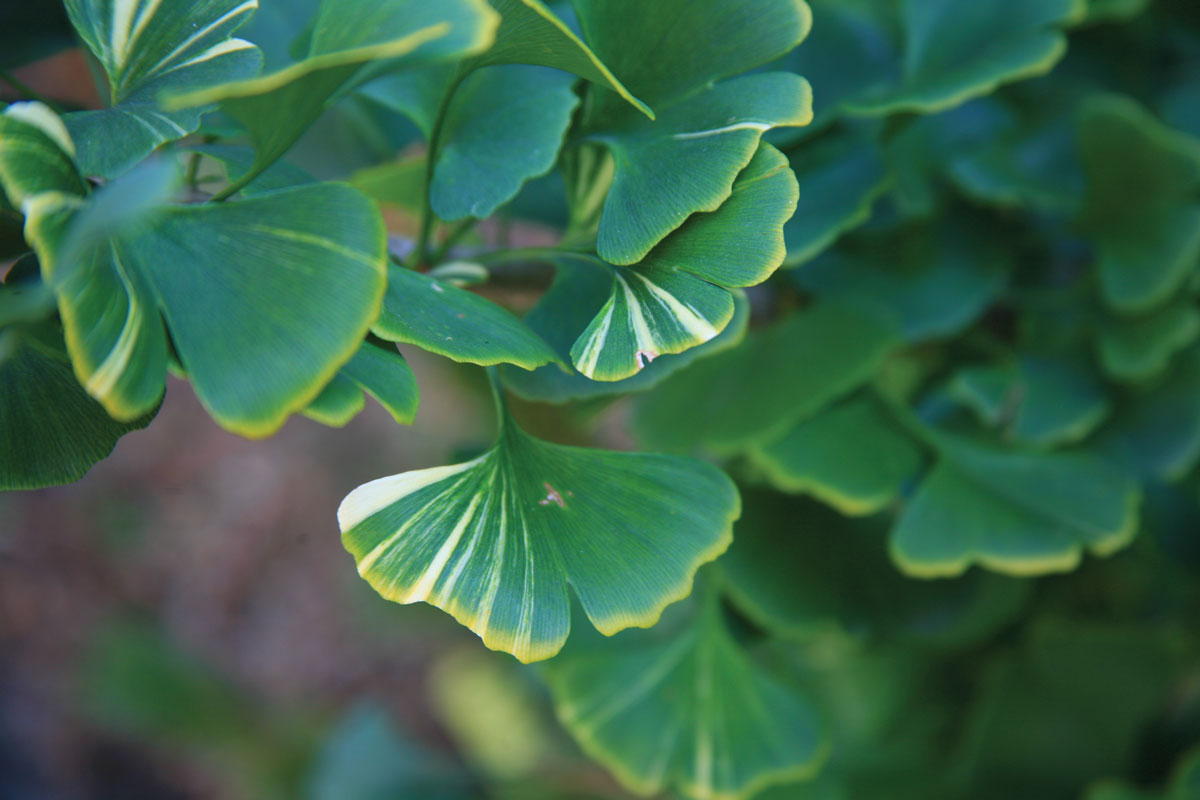 The leaves of the ginkgo are fan-shaped with a central notch. The cultivar seen here is ‘Variegata.’

According to fossil records, ginkgos, which are native to China, have been growing on the planet for over 200 million years. That means they actually preceded the dinosaurs.

The ginkgo (pronounced GINK-o) remains one of the toughest and most adaptable trees in the landscape. They can be grown throughout most of the U.S. They do best in full sun and are not fussy about soil types (they’ll tolerate salty but don’t like very wet conditions). They are free of pests and diseases. Their toleration of air pollution makes them great street trees (but they should not be put under power lines). In fact, some were noted to have survived the atomic radiation in Hiroshima.

It is rather spare looking in youth but becomes wide-spreading as it grows slowly to reach 50 feet or taller. They can live 1,000 years or more. 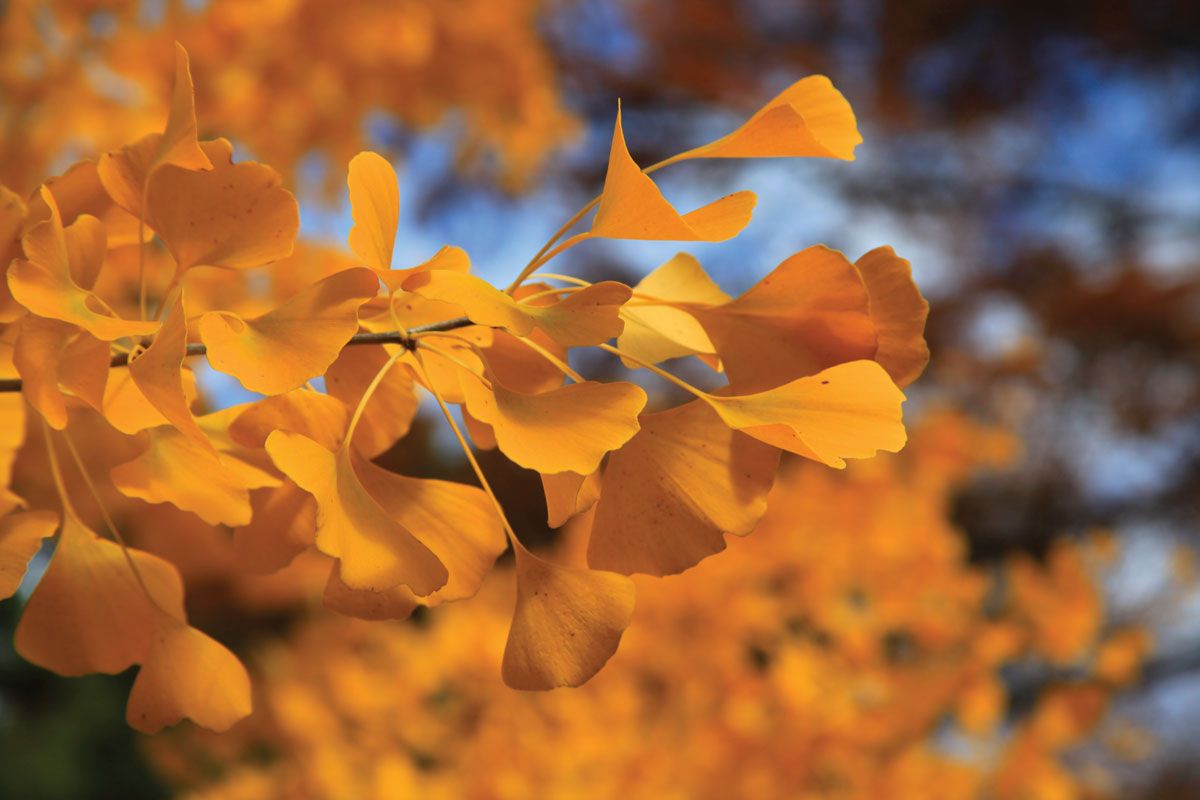 The ginkgo’s fall color is dazzling.

The common name refers to the resemblance of the leaf outline to the shape of the maidenhair fern. The leaves are fan-shaped with a deep central notch, creating two lobes. Very fine parallel veins radiate from the base of the leaves, which are clustered in groups on stubby spurs.

The buds emerge mint-green in spring and are apple-green in summer. They appear to swing in the slightest breeze. A notable feature is the fall color, which is a dazzling, saturated and uniformly yellow. Typically, the leaves drop from the tree all at once – often overnight – forming a circular carpet under it. Quite a sight! 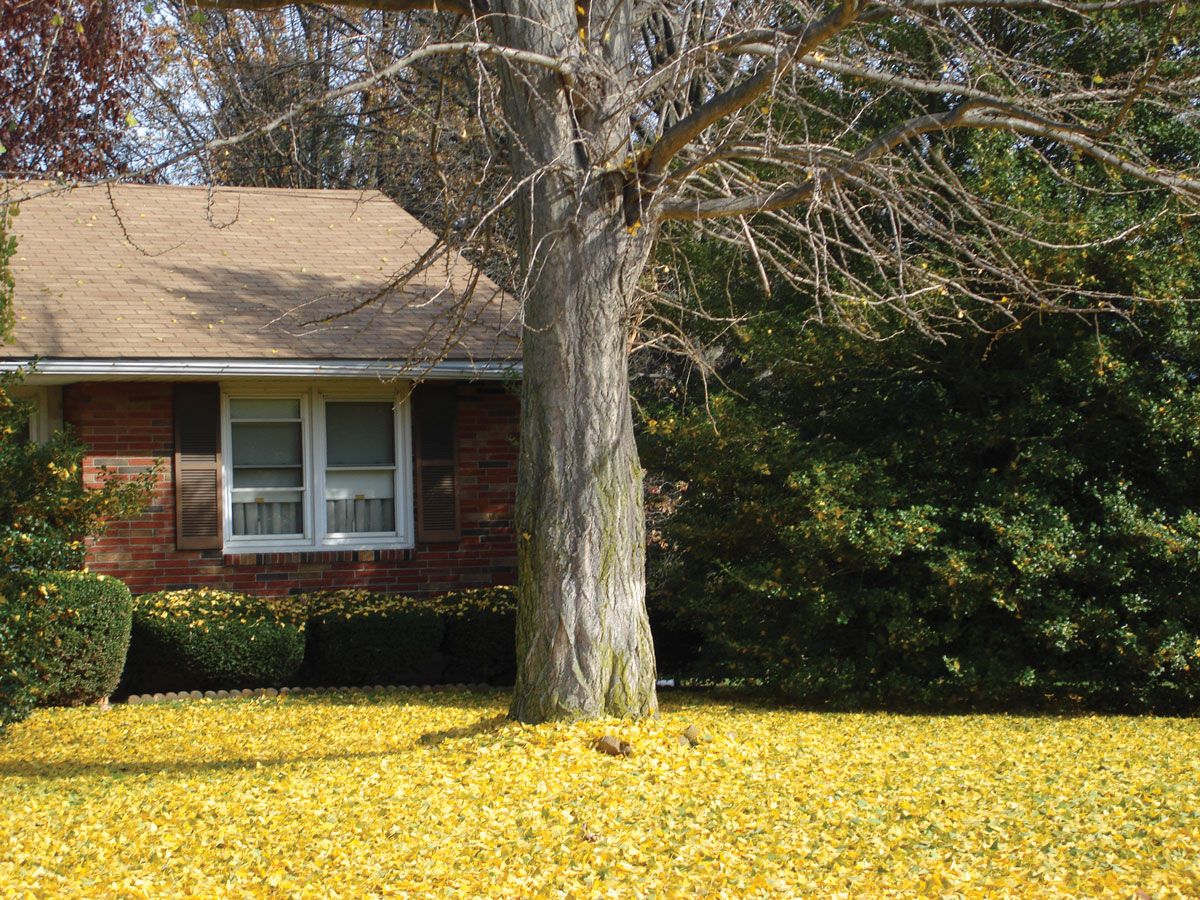 Leaves drop from a ginkgo in one swoop.

The bark is thick and gray-black in color with shallow fissures.

Most woody plants have both sexes on the same plant. However, ginkgos are dioecious, meaning there are “male” and “female” plants, just like hollies. With hollies, one wants to grow the females, which display the colorful red berries (though botanically they are drupes, not berries), with just one male in the group for pollination.

However, just the opposite is true with ginkgos. It is very important to plant only male trees. Females produce fleshy fruit the size of a grape with an outer nasty-smelling (in truth, putrid) pulp enclosing a single seed often called a ‘nut.’ They fall to the ground in autumn and are considered by owners as the ultimate landscape nuisance. (It takes decades for ginkgos to begin producing the stinking droppings, thus taking some time before owners are unhappy to learn they have a female tree.)

It is likely that your local fine nursery will carry only certified male cultivars. A good one is ‘Princeton Sentry.’ For a small garden, ‘Jade Butterflies’ and ‘Mariken’ are more suitable.

Ginkgo is regarded as a sacred tree in Asia. It is a symbol of changelessness, hope, love, protection and longevity. The topknots worn by samurais and sumo wrestlers are shaped like a ginkgo leaf. The leaf pattern of ginkgo is often found in jewelry, art and ceramics. The wood of the ginkgo is of little economic value but is often used to make tea utensils and chessmen. 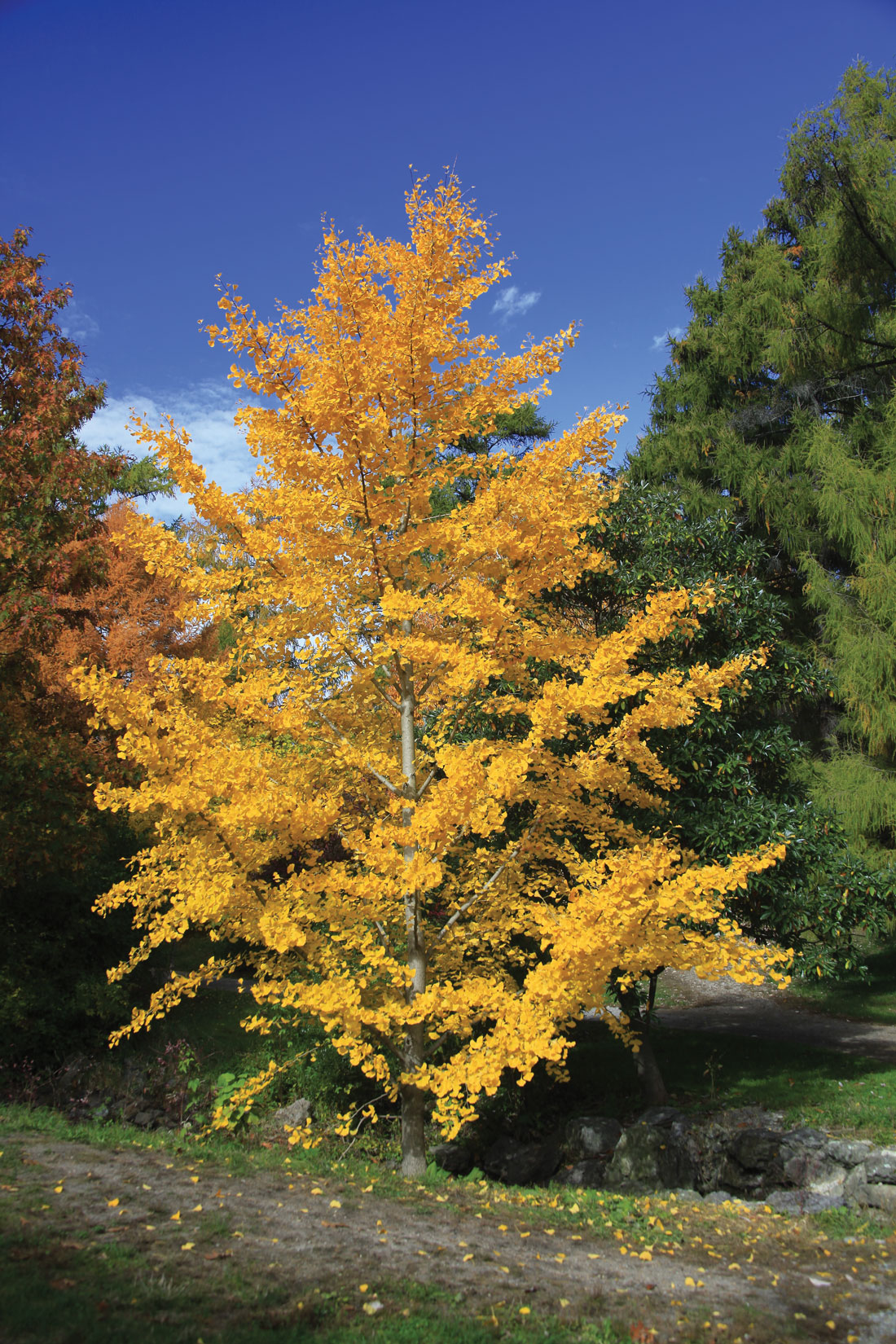 A ginkgo stands out against a backdrop of evergreens.

Ginkgo “nuts” – the edible seeds found inside the fruit of the trees – are eaten in some Asian cultures. The seeds are steamed until the shell cracks and then the kernel is removed and eaten or used in baked dishes. They are said to taste like baked potatoes or chestnuts. Roasted seeds are considered a delicacy and are often served at special events like weddings.

While supplements of ginkgo are sold in herb outlets, alleging benefits for improving brain function and memory, there is no convincing scientific evidence for this. 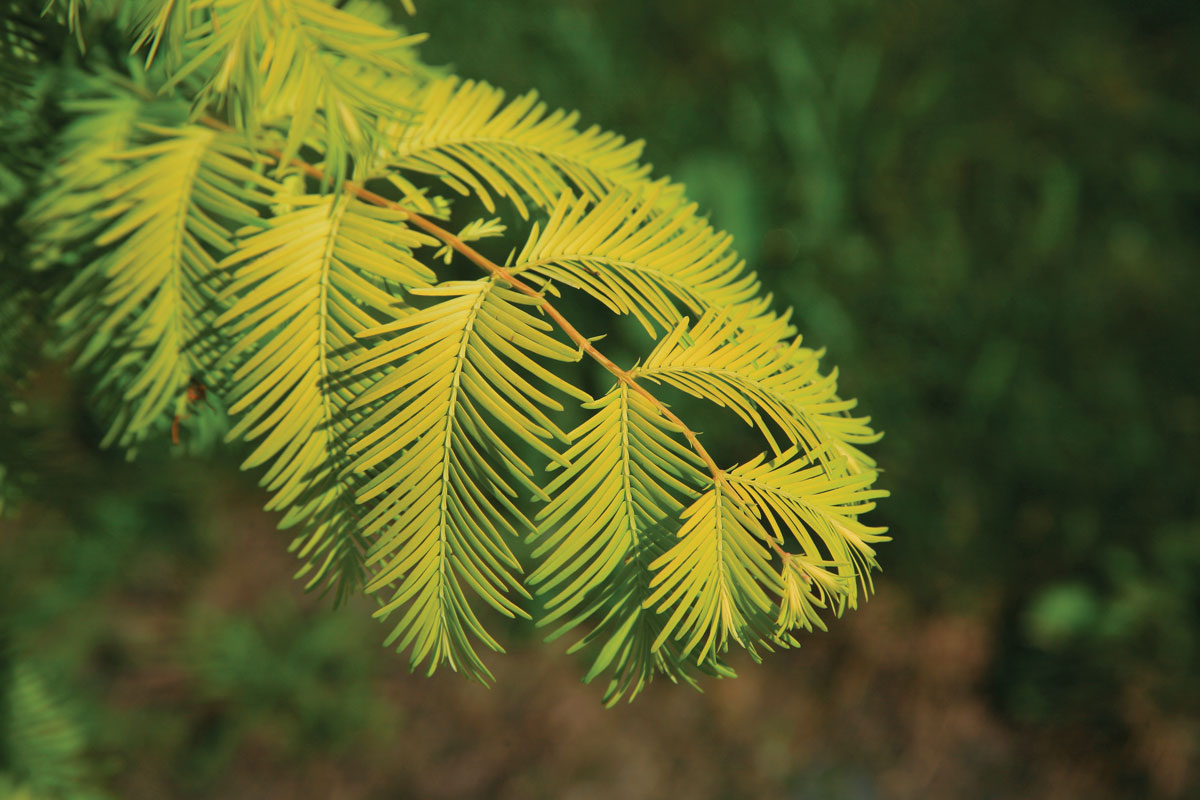 The dawn redwood’s leaves are soft and lacy and, in the case of the cultivar ‘Ogon,’ golden in color.

Dawn redwoods are not quite as old, probably dating back only 100 million years, according to fossil records. They were thought to be extinct until living specimens were discovered in 1941 in central China. Seeds collected by a group from Boston’s Arnold Arboretum were collected and distributed to all the major botanical gardens. Specimens from that original seed distribution are growing at Longwood Gardens in Chester County and the Morris Arboretum of the University of Pennsylvania. 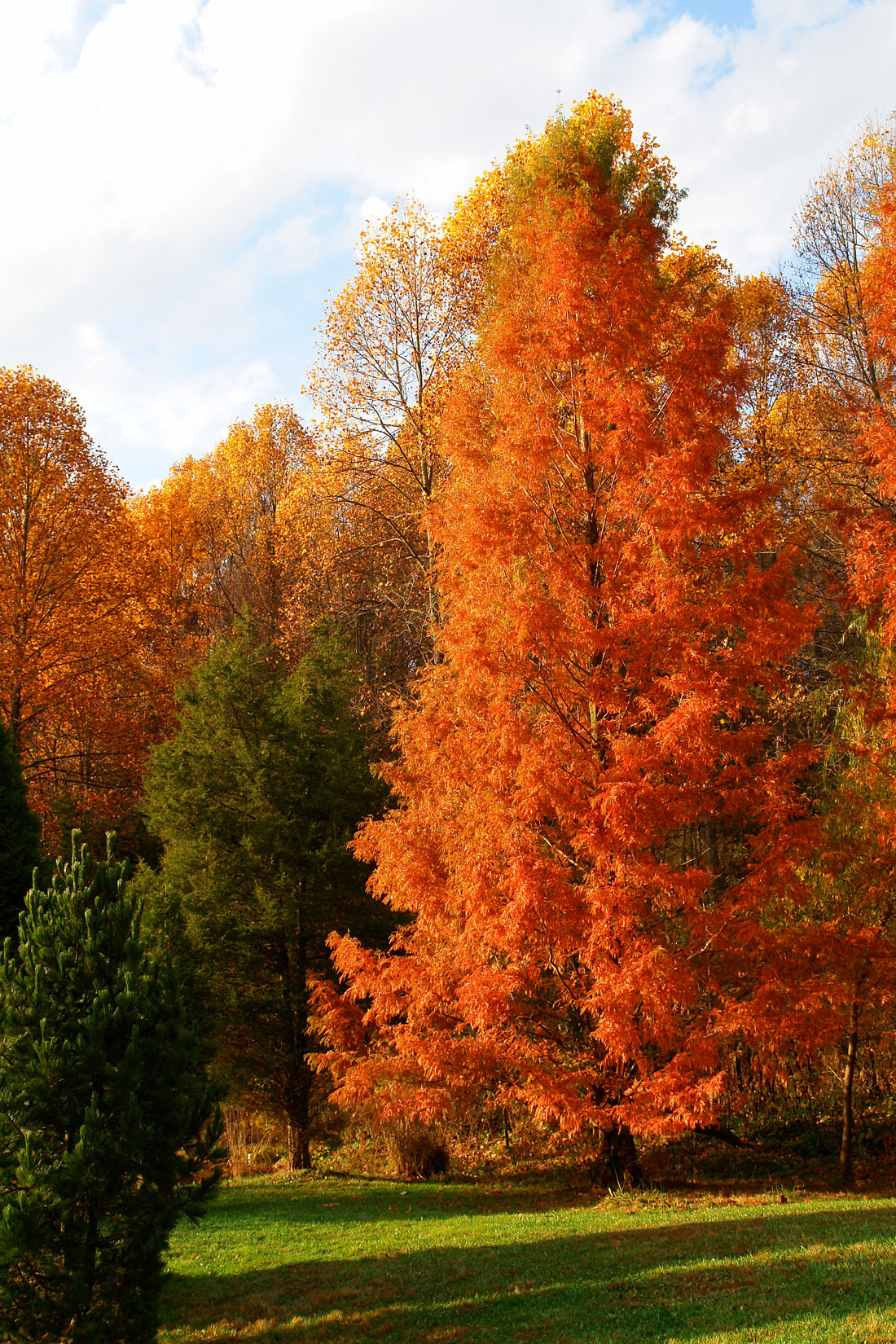 Since its rediscovery, the dawn redwood has become widely used in home landscapes and is available at most nurseries.

This is a large and vigorous tree. It grows up to 4 feet a year, eventually reaching to 100 feet in height and 25 feet in diameter with a pyramidal shape. It will attain 40 to 50 feet in cultivation in fewer than 20 years. The broad conical habit is very orderly and uniform with a sharply pointed top on a central single stem.

The fern-like, oppositely spaced compound leaves are soft and lacy. They are bright-green when they first emerge and become a shade darker during the growing season. The conspicuous autumn color changes from a yellow-brown to pink, even apricot, and then a copper-brown. It has a very distinctive winter habit when dressed with snow.

The bark is orange to russet-brown and becomes fissured with age and peels in long strips. The sometimes massive trunks are buttressed and fluted at the base. Children call it the “armpit” tree. 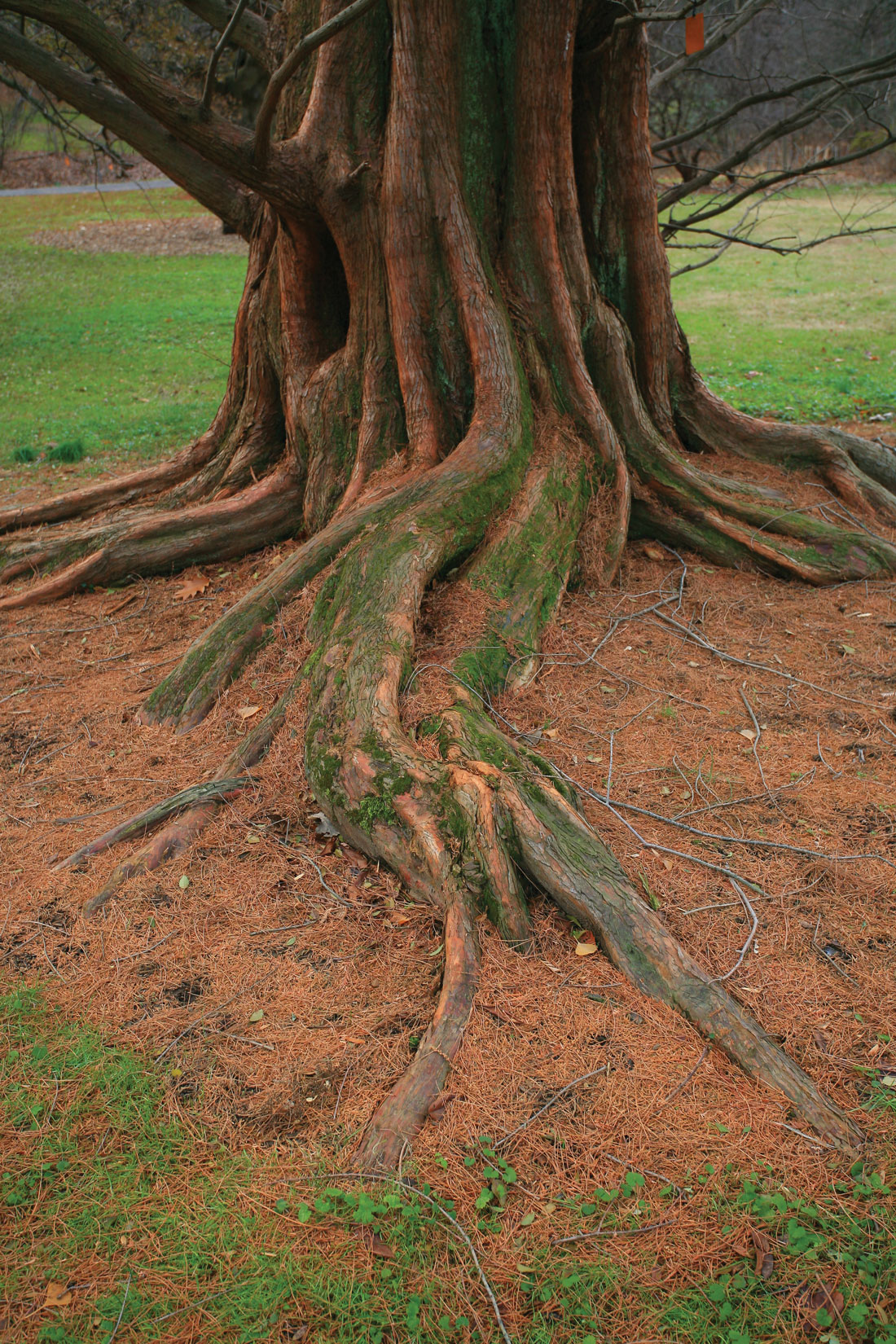 Buttressed trunks are one of the dawn redwood’s unique ornamental features.

Very hardy and heat tolerant, they do prefer reliable moisture. I have several growing in areas that are very wet, even boggy, during the spring. Nevertheless, they will grow on dry sites once established.

Like the ginkgo, the dawn redwood will accept pollution and urban conditions and are also pest- and disease-free. Although commonly called dawn redwood, Metasequoia is more cold-hardy than the western evergreen redwoods. 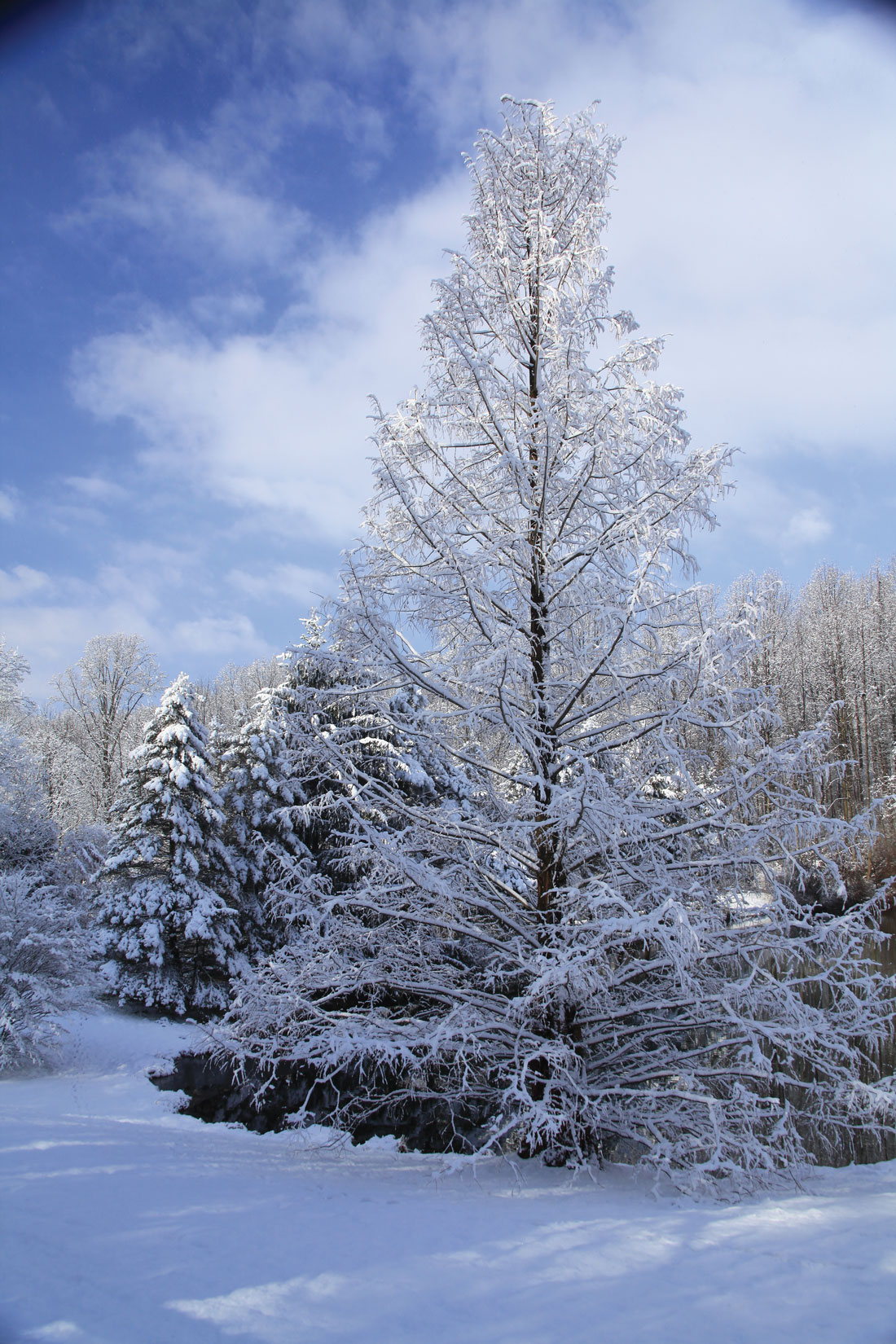 A dusting of snow makes the dawn redwood a picture-perfect choice for the winter landscape.

A really nice selection is the slower-growing golden dawn redwood, ‘Ogon.’ The spring foliage is a bright-yellow and remains greenish-yellow throughout the season. This cultivar does best with afternoon shade. It is sometimes listed as ‘Gold Rush.’

If you have the space, plant a dawn redwood, pull up a chair and watch it grow.

The ginkgo’s fall color is dazzling.