Twenty-two years ago, Linda and Levi Stoltzfus realized their dream of owning a farm. Little did they know that their daughter’s little pumpkin patch would eventually yield big results.

A year ago, photographer Nick Gould and I were separately  traveling along Landisville Road on our way to Manheim, when we each spied a pumpkin extravaganza. “What was that?” I asked myself. I turned around and drove by once more, this time noticing the fence on which hyacinth bean vines were growing.

When Nick joined me at our destination, he also commented on the farm he had passed. “Let’s go back over there when we’re finished here,” I suggested. Not only were there pumpkins, but also plants, gourds, crafts, wreaths, birdhouses and animals, too. The way the barn was decorated was simply enchanting. We were like two kids in a candy store! So, we sought out Linda and asked if Nick could come back another day and shoot some pictures. To our delight, the Stoltzfuses were open to Nick returning.

originally a dairy farm, the Stoltfzuses were having so much success with their pumpkins, squash and gourds, that two years ago they shut down the dairy operation in order to fully concentrate on their very successful fall-harvest enterprise. Linda was happy to be able to combine two of her favorite things – gardening and animals – into the business. “I’m not happy unless I’m digging in the dirt,” she remarks.

January, however, is dedicated to studying all the seed catalogues that arrive in the mail. Through Linda’s research, 60 varieties of squash, 30 varieties of pumpkins and approximately 15 varieties of gourds now grow on the 47-acre farm. Corn, soybeans and hay are also grown on the acreage.

Linda especially likes heirloom varieties and names Baker Creek Heirloom Seeds and Seed Savers Exchange as being among her favorite sources for seeds. She buys new seeds every year, having “learned the hard way” that it’s not worth her time or effort to collect seeds from the crops that are grown on the farm. “You end up planting diseases along with the seeds,” she says.

Seeds are planted at the end of May. It then takes anywhere from 85 to 125 days for the pumpkins, squash and gourds to mature. The crops are timed to have a variety ready for opening weekend (Labor Day). Through September and October, the displays multiply.

Pumpkins can be finicky, thus the various fields are rotated about every four years. “Pumpkins are susceptible to fungus,” Linda notes. And, too much or too little rain can be detrimental to their growth. An over abundance of rain late in the season can cause a pumpkin to grow too fast and split open. To keep things on an even keel, the Stoltzfuses irrigate their fields. Linda reports that this year’s pumpkin and squash crops should be good ones. “We had nice rains all summer,” she points out.

as for the animals, when you visit the farm in the fall, you’ll first encounter Tony, one of the family’s dogs, who likes to greet visitors and keep an eye on things. “He just loves pumpkin season,” Linda reports. The Stoltzfuses also purchase at least two calves for pumpkin season, which visitors can see. She also notes that the horses love the attention they receive from visitors. Cats also roam about the property. “I just love animals!” Linda says.

linda admits the business has definitely received a boost thanks to the popularity of decorating homes for fall. “It really has changed since we started,” she says, noting that 20 years ago, a family would arrive to choose a pumpkin for the front porch and perhaps buy some Indian corn and corn stalks. Now, they also want fall flowers, a carload of pumpkins and squash, gourds and trendy plants such as millet and sorghum.

Linda and her daughters, plus their helpers, stay in tune with trends and create garden- and harvest-inspired art and craft items that keep customers coming back. “We learn a lot from our customers,” Linda says. “They’ll bring baskets, bowls and other things for us to fill.” She also admires Martha Stewart and looks through issues of Martha Stewart Living magazine for inspiration.

Linda and her daughters have also helped several English brides choose fall decor for their weddings. One of Linda’s daughters specializes in calligraphy and has created some whimsical “engraved” pumpkins for weddings.

“It’s a family affair,” Linda says of the way their four children pitch in to help with the business. “Our sons always take some time off from their jobs in October to help.” As Martha Stewart would say, that’s a good thing. “Fall is all-consuming around here,” Linda says. “We appreciate the help!”

The Stoltzfus farm is located at 1151 Landisville Rd., Manheim. Hours are 8 a.m.-6 p.m., Monday-Saturday through October. Self-service is available beginning November 1 until Thanksgiving. 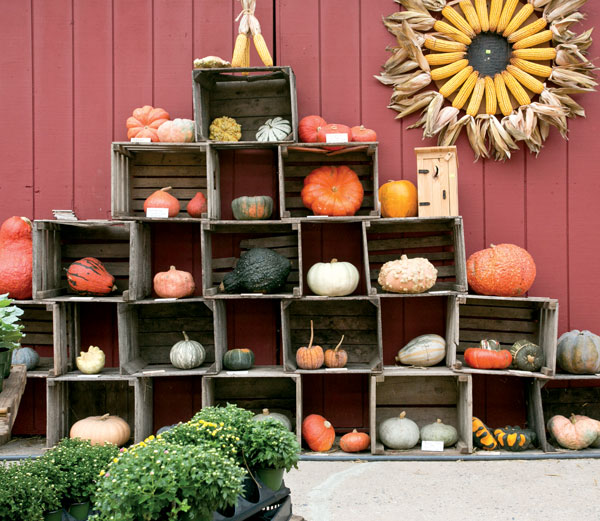 A pyramid built from crates provides a way in which pumpkins and squash can be creatively displayed. The corn wreath made its debut last year.