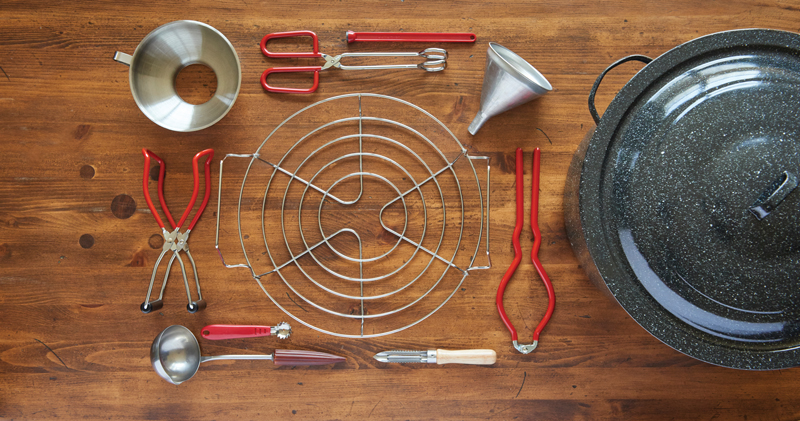 At the end of every harvest season, without fail, I am filled with sorrow. I notice the selections at my favorite roadside stands are reduced from a cornucopia of produce to pumpkins and eggs. So, this year I decided to take matters into my own hands and learn the process of canning food. 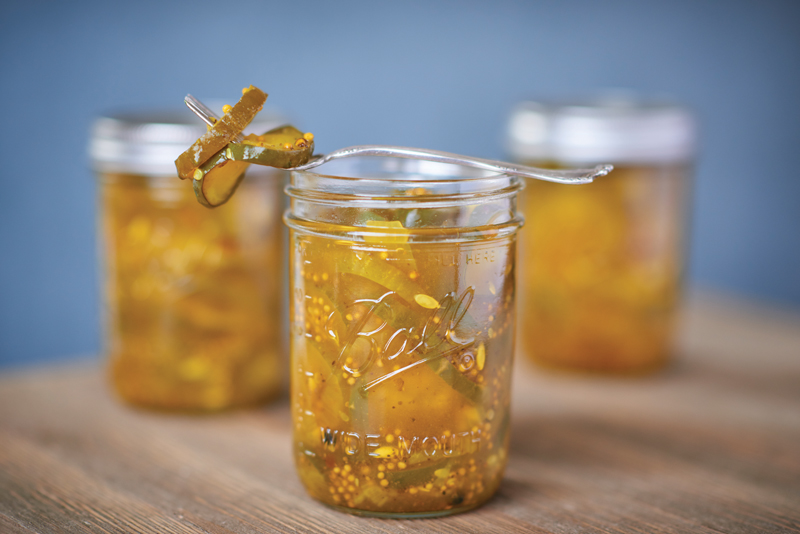 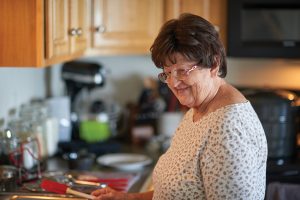 Many of us have memories of our grandmothers canning the seasonal bounty, to be enjoyed during the dreary months when colorful and tasty vegetables were once nonexistent.
Canning, however, is a tradition that seems to have skipped a generation or two – maybe because our working mothers didn’t have the time, or perhaps because produce suddenly knew no seasons.

Look through any magazine or peruse the Internet, and you’ll discover that canning (or “putting up” as they used to say) is hot again, especially with millennials and younger generations. I was game to learn, so I recruited the assistance of my grandmother to get me started. Initially, she was reluctant to join in, admitting that her methods were both antiquated and rusty. Fortunately, I was able to coerce her into canning bread-and-butter pickles with me. To be fair, if you know anything about my grandmother, she wasn’t going to say no.

As I dove into researching the process, I discovered canning methods lack cohesion, with folklore and unfounded methods spanning decades. It wasn’t definitively clear why anything was done in a particular way. Generally speaking, recipes always vary and serve first and foremost as inspiration in cooking, but in preserving food, I soon learned inspiration is a major health concern. If you’ve read Foodographer before, you know I’m a proponent of the old ways merged with the new. In this particular instance, that philosophy couldn’t be more important. 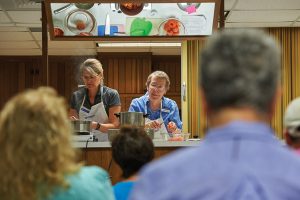 Penn State Extension offers courses on food preservation at the Farm and Home Center in Lancaster. They teach researched methods of canning based on irrefutable science. I attended two of their canning workshops where I met Martha Zepp, a food preservation consultant whose recipes are completely rooted in science. The collective wisdom of the Penn State Extension instructors quickly leveled the playing field. They have witnessed canning processes develop over the years, and according to them, recipes prior to 1994 should be avoided, given a key turning point in recent history. 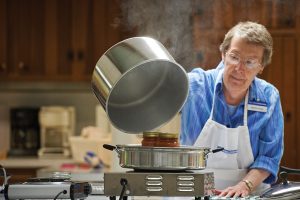 Over time, recipes have changed as our understanding of science and food processing developed. In the late 1980s, Dr. Gerald Kuhn and Dr. Elizabeth Andress, then a graduate student of Penn State University, conducted an exhaustive study on safe canning procedures. They developed research-based recipes using a thermocouple in the jar to verify safe temperatures for an array of foods and various jar sizes. Coupled with an understanding of what threats may be present within the jar, they were able to establish accurate food processing times. Andress later used those recipes to establish the cookbook on safe canning, So Easy To Preserve.

According to Martha, a lifelong instructor of canning processes, “I am not teaching what I learned from my mother because of the updated research that took place in the late 1980s. The methods that I was even teaching when I started teaching in high school are no longer considered safe. It was the best research at that time, but now we know so much more about what happens inside a jar that our recommendations have changed,” she says. “Some people will talk about an old method, and yeah, I‘ve heard of that, but I also know why we no longer do it based on scientific research. I’m glad they’ve never been sick, but in the case of botulism, that can be fatal.” 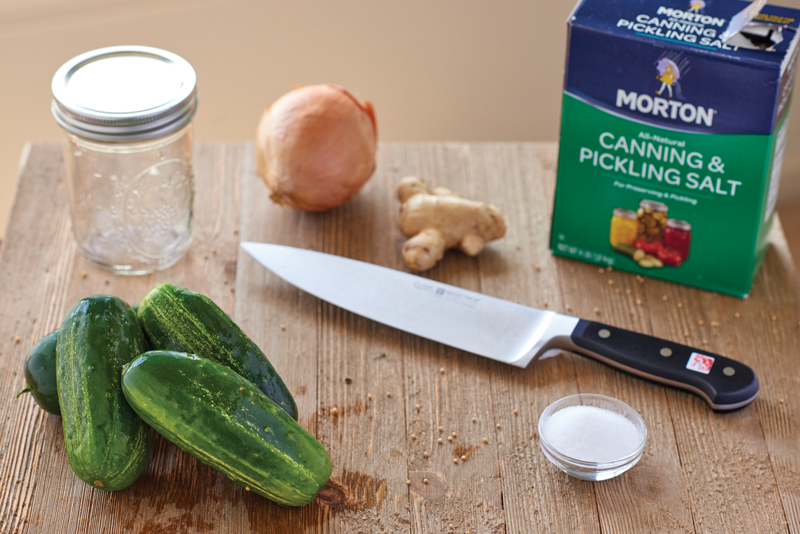 Canning is fairly straight forward once you know the basics. Clean, hot jars are packed with cleaned food, sometimes raw, sometimes cooked. Recipes provide a specific processing duration and temperature to heat all food inside the jar to a degree where anything harmful will be controlled. The duration and temperature of each recipe depends on the volume of jars used, the acidity of the food to be canned, and your geographic altitude above sea level (most of Lancaster County is below 1,000 feet). Proper temperature and food acidity are critical to keep mold, bacteria, yeast, and enzymes that cause ripening in check, which can cause food spoilage, illness and even death.

In 2015, as reported by the CDC, a church potluck meal turned fatal, killing one and hospitalizing more than two dozen, with many being treated for more than a week. The culprit: potato salad made with canned potatoes processed with a water bath canner (instead of a pressurized canner), which is incapable of reaching 240 degrees to destroy botulism spores in the starchy, low-acid food. That’s where researched recipes using science comes in to establish a safe canning process.

Canning recipes will call for a designated “head space” of air to ensure a solid seal as the jars cool. Removing pockets of air bubbles in the jar helps to ensure a proper seal. Always keep jars totally upright throughout the process, and lids should only be finger tip tight to allow air to escape while boiling, helping to ensure a good seal. An excess of head space may cause darker colors in the food due to oxidation. 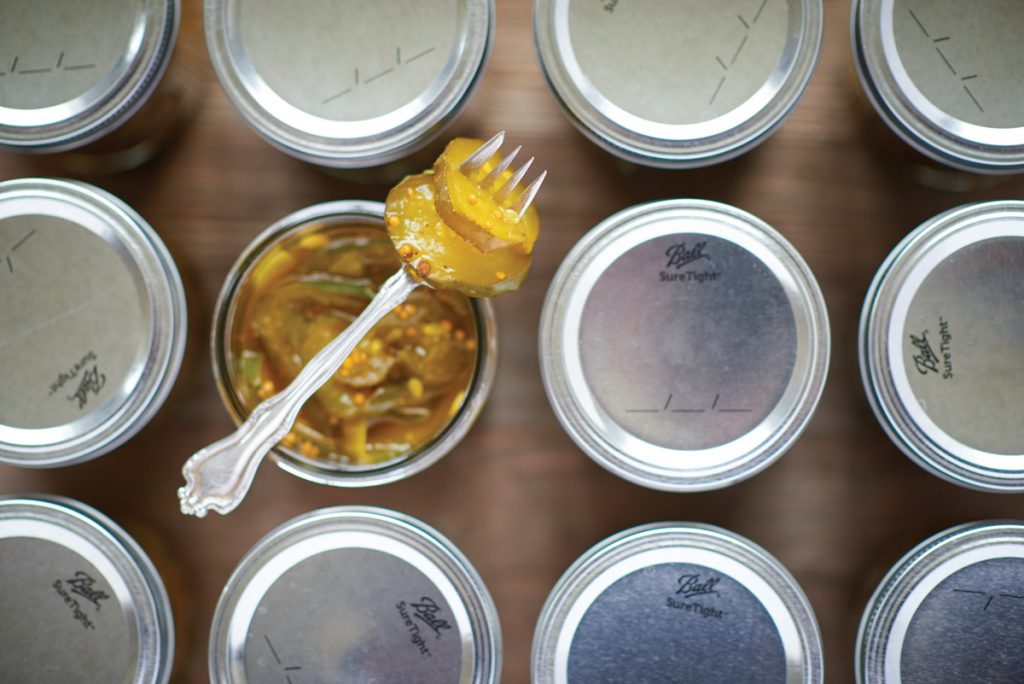 Clean, two-piece lids should be used for home canning. Where the rings are reusable, the flat lids are single use only, easily replaced by the dozen for a couple of dollars. For as much prep time that goes into canning, it’s well worth the few dollars to buy proper supplies. Heating lids in hot water with modern lids is optional, softening the rubber for a better seal. Tempered and reusable glass “Mason” type-jars are preferred, with Ball® being the last U.S. manufacturer. Old mayonnaise jars and single use store-bought jars are less likely to seal properly. 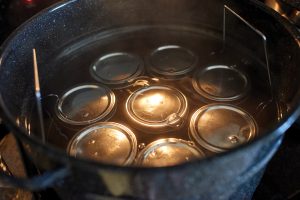 This is the simplest method of canning, and you might not need much to get started at home. I bought a 21.5-quart Granite Ware canner for $25 at a hardware store that included a canning rack to elevate jars above the direct heat of a cooktop. A stockpot will work fine if you can find a canning rack that will fit. The canner needs to be large enough for jars to be covered with a couple inches of water for even heating. Locally, Good’s Store is an excellent source for canning supplies, including canners, jars and utensils.

Water bath canning is only intended for preparing high-acid foods that are safe to process in boiling water at 212 degrees Fahrenheit. Many water bath canning recipes call for adding 5% acid vinegar to the food, creating an environment where botulism can’t grow. When selecting ingredients, white vinegar has more bite than cider vinegar but is ideal for maintaining color. Otherwise, the two are interchangeable, maintaining a critical 5% acidity. Wine-based vinegars should be avoided, as they may contain protein, which changes the pH level. 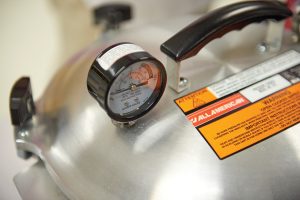 Relative to water bath canning, pressure canners are precision machines of considerable weight and investment. The more advanced of the two processes, pressure canning allows water to steam at temperatures above boiling at 240 degrees Fahrenheit or beyond depending on altitude or relative pressure. Higher temperatures are required in processing low-acid foods for the time specified in a scientifically tested recipe to destroy botulism spores. Anything less in either temperature or quantity is totally insufficient to eliminate the risk of botulism. Pressure canners can be used for water bath canning, serving as double duty. 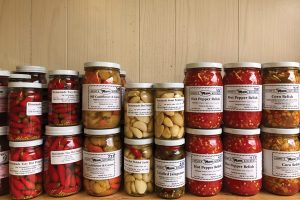 When buying jars of locally canned food, look for identifiers relating to the PA Department of Agriculture or the FDA. Commercial canners will often use a single-use, one-piece lid which is often white or gold. When buying, you can always ask how canned foods are processed, if processing happens in a regulated kitchen, if pets or even children are present, and so on. Canned items should be stored in a cool, dark environment, so carefully examine foods that are in extreme heat for extended periods of time.

Hot and Cold or Raw Packing

In either method, you will first begin with a warm jar filled with warm liquid so as not to shatter the jar when inserting it into hot water. Green beans, for example, can be washed, trimmed, snapped (or cut) then added to a warm jar as they are raw, or partially cooked. From there, the canning process is the same, though the results will slightly vary. 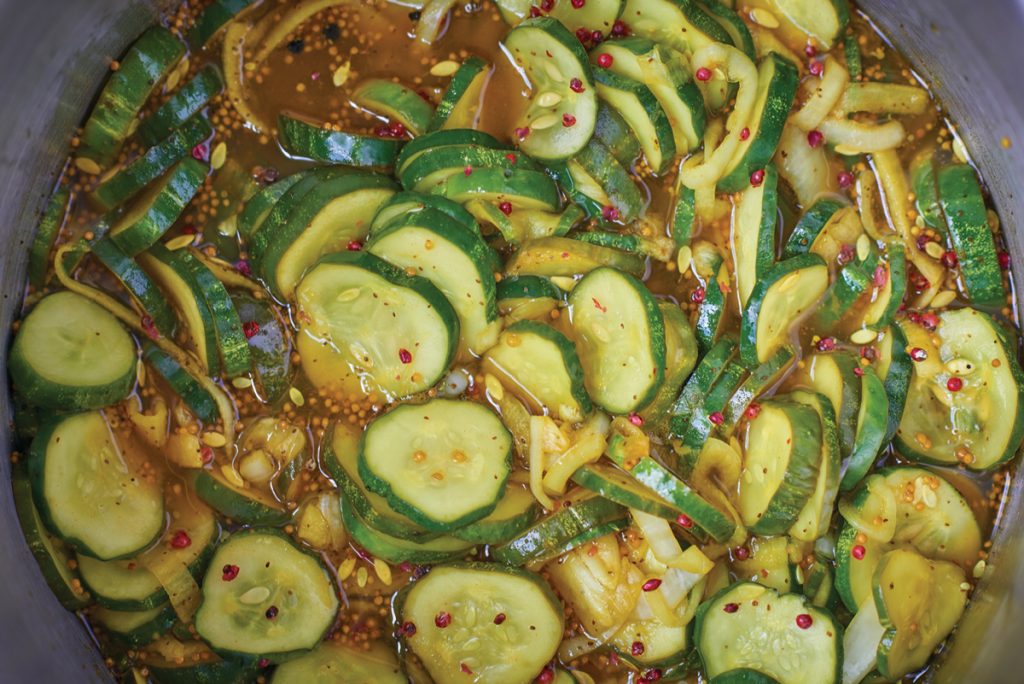 Hot packed foods tend to be used with a water bath canner, and air is removed from the food itself, condensing in size and filling jars more densely. Optionally, you can add flavor with pure canning salt or omit it for a lower-sodium side.

Canned vegetables are ready to serve without delay as a side or into a casserole, and you know precisely what ingredients are in the jar. 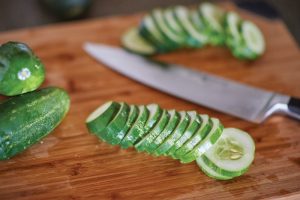 Years ago, when I moved from Lancaster County to Louisiana for a short time, I quickly drafted a list of all the people, places and events I missed from home, everything I longed to revisit and with whom I would share those moments. Cooking with my grandmother was on that list, and canning has long been a skill I wanted to acquire.

Years later, I finally achieved that goal. She and I both had a lot of fun, and it was deeply rewarding making bread-and-butter pickles with her. She was delighted to taste the final results. Her willingness and those teaching the class at Penn State Extension convinced me that independence is often the result – intentionality and paradoxically – of togetherness.

Penn State Extension offers online resources and invaluable workshops in Lancaster and throughout Pennsylvania on a regular basis. You can check out their calendar of events at extension.psu.edu. 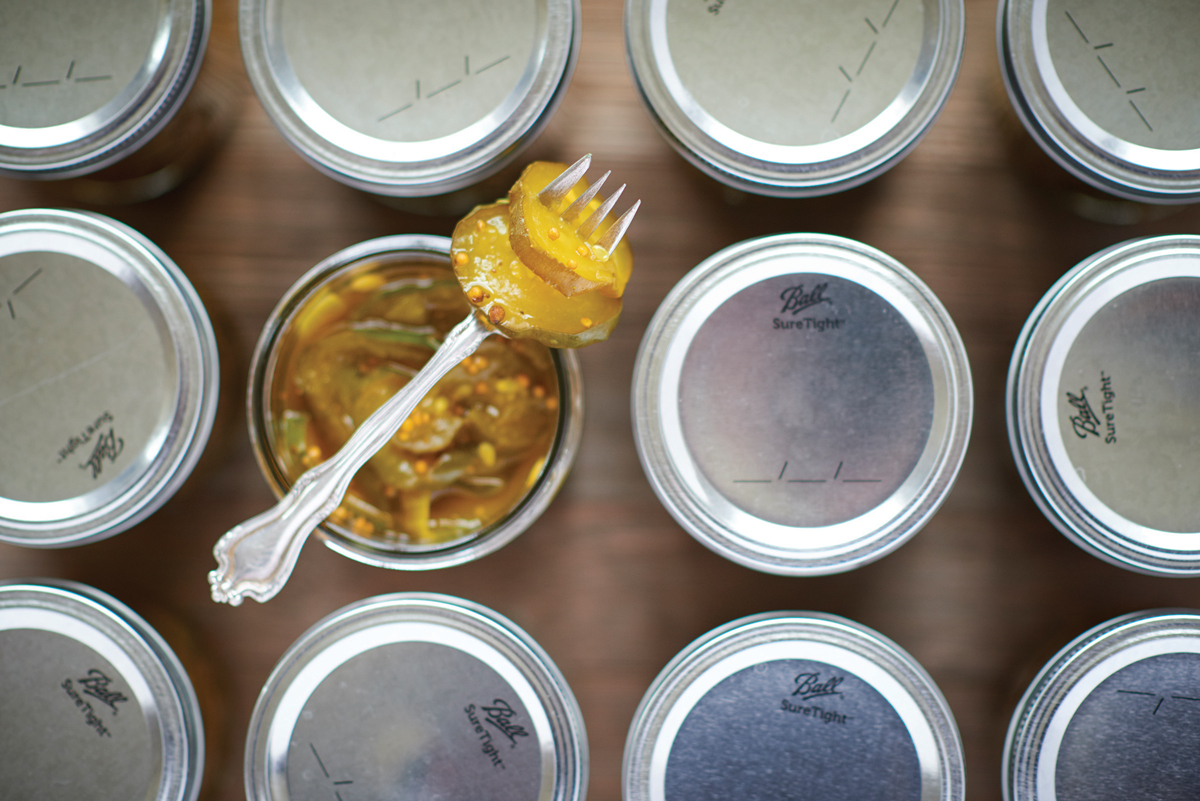