Who knows where this technique originated! It seems that every country bordering the Mediterranean lays claim to it. Cookbook author and food blogger Laura Kelley (The Silk Road Gourmet) was so intrigued by the dish that she researched its origins and came to the conclusion that we have the ancient Phoenicians to thank for it. In the ancient world, salt built and sustained empires. The Phoenicians, who obtained salt from the Egyptians and mined it in North Africa, used it as a trade commodity throughout the Mediterranean. Since then, wars have been fought over salt, and taxes have been levied on it. Columbus’s voyages were rumored to be financed by salt mined in Southern Spain. In the Middle East, deals were sealed with salt. The word “salary” is derived from the Latin word for salt and relates to the fact that members of the Roman army were either paid with salt or received salt allowances with their earnings. The word “soldier” is from a Latin word that means “one who is paid in salt.” Hence, if you were a good solider, you were “worth your salt.” Ancient religions used salt for purifying ceremonies. Salt is mentioned several times in the Bible, and the term “salt of the earth” can be accredited to Jesus (Matthew 5:13). Salt, of course, is used to flavor food. The word “salad” comes courtesy of Ancient Rome, where salt was used to flavor leafy vegetables. The 13 original colonies probably have salt to thank for their survival, as colonists used it to preserve food that sustained them through those first bitterly cold winters. The technique I used is widely utilized throughout the Mediterranean. The salt crust literally steams the fish and delivers a finished product that is incredibly flaky, moist and tender. Again, it’s great for a communal table. Also of note: I’ve never had anyone who has sampled this dish say it tastes salty. The salt simply creates a crust and doesn’t penetrate the fish. 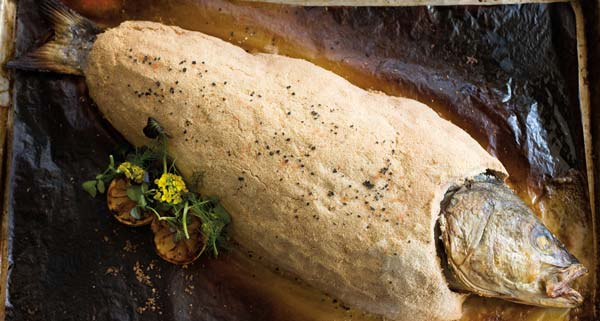