Whether you’re entertaining out-of-town guests or your bored children, the dog days of August can be a challenge. Perhaps a little time travel will help to shake things up! The Red Caboose complex near Strasburg is just plain fun!

You can get your adventure started with breakfast at the Casey Jones’ Restaurant at the Red Caboose. It’s one of the few restaurants in the county with a railroad view; the Strasburg Rail Road’s steam engines chug by the restaurant and motel on a daily basis. As if that isn’t enough, the restaurant makes its home in two Pennsylvania Railroad dining cars that date to the early 1900s.

“We’re off the main drag, so the number one reason people come here to dine is the unique experience,” explains Kat Prickett, marketing manager and one of the owners. “Not only can they dine in a vintage dining car, but when the train comes, kids plaster themselves to the windows. We also flip the switch that gently rocks the car, giving our guests the feel of actually eating in a moving dining car.”

The Prickett family – Tyler, Kat, and Tyler’s parents, Todd and Debra – became the owners of the iconic motel and restaurant in February; the restaurant reopened in March. However, a connection was made years ago when Tyler visited the Red Caboose as a boy and often told Kat of the fond memories he had of those visits to the area. Kat in turn surprised him with an anniversary visit a few years ago. When he learned the property was for sale, Tyler saw it as a way to realize his dream of operating his own business.

The Red Caboose originated in 1970, when the late Don Denlinger saved 19 cabooses from being scrapped. He was also the developer of a number of Strasburg tourism-related businesses such as Mill Bridge Village, Historic Strasburg Inn and Fulton Steamboat Inn. Over the years, the number of cabooses grew to 38, plus a baggage car. Originally painted red (hence the name Red Caboose), they were repainted at one point in the livery (paint scheme) of America’s most famous railroads. “Our big focus for the restaurant and the motel is restoring it to what we feel Don Denlinger would have wanted if he were still around. Our goal is creating a family-friendly environment, a place to make memories,” Kat says.

To that end, the family freshened up the décor of the cabooses that serve as guest lodging, plus made some minor changes in the dining area. “We like the Victorian charm of the interior of the dining cars,” she says with a smile.

The restaurant is named in honor of one of the country’s most famous train engineers. Born in Missouri, Casey Jones spent most of his life in Tennessee. He worked for a number of railroads, including the Illinois Central. He was promoted to an engineer in 1891. People who lived along his routes knew Jones was aboard the train for two reasons: his punctuality (it was said you could set a watch by him) and the distinctive whistle he used. His peers considered him to be one of the best engineers in the business. On the rainy and foggy night of April 30, 1900, he was killed when the train he was driving collided with a stalled freight train in Vaughan, Mississippi. Stories of his heroic efforts to avoid the collision emerged and a legend was born, only to be immortalized in song by everyone from Wallace Saunders and Marty Stuart to The Grateful Dead.

In addition to breakfast, lunch and dinner are also served on a daily basis. The menu features American fare prepared fresh to order. Executive Chef Michael Durante, fondly known as Chef Mike, has over two decades of restaurant and catering experience. Many menu items have playful railroad-themed names such as the Oxford Southern (creamed chipped beef or sausage gravy served over Texas toast with home fries, juice or coffee) and the Santa Fe (a spicy black bean burger topped with southwestern sauce, lettuce and tomato).

There are also weekly and monthly themed specials. The latter is inspired by railroads worldwide; for example, the 30th Street Station centers on a pulled pork sandwich. Chef Mike points out that a number of the specials showcase locally sourced in-season ingredients including produce. He notes that top sellers – chicken pot pie, meatloaf and shepherd’s pie – are found on the “Taste of Lancaster County” section of the dinner menu.

Burgers are also popular with guests. Chef Mike explains that the 8-ounce (half-pound) burgers are hand-formed and contain his special seasoning. Burgers on the Little Engineers (kid’s) menu are smaller (4-ounce), but just as tasty. Additionally, there are some menu twists. “We use slightly different fish – orange roughy rather than salmon. It makes us a bit different,” Chef Mike says.

Janie Jones’, an ice cream parlor named after the railroad legend’s wife, opened earlier this summer. Fittingly, it’s located in the parlor car and features hand-dipped and soft-serve ice cream. An area where take-outs of Casey Jones’ menu can be purchased is also located in the car. “The ice cream parlor and take-out area is not only great for our motel guests to grab a quick meal on the run, but it’s wonderful for people who are visiting the area,” Kat says, noting that there are a number of destinations within a short distance that not only delight rail fans, but also provide views of the county’s famed farmland and agritainment.

The Red Caboose also added summer entertainment to its menu. The Barn is home to free movies that are screened nightly (through Labor Day), with concessions and ice cream available. On August 19 and 20 (7 p.m.), the music of Lewis-n-Clark (classic jazz, Rat Pack covers and vintage country) will take over The Barn. The event is free and open to the public. The Barn also hosts dances, while sing-alongs are held around a campfire. Kat explains that future plans for The Barn may include transforming it into a permanent events venue. In the meantime, the parlor car serves as a location for anniversary or birthday parties.

Visitors can also climb a 50-foot silo, become acquainted with residents of the petting zoo, play arcade games, shop for gifts and take a buggy ride. 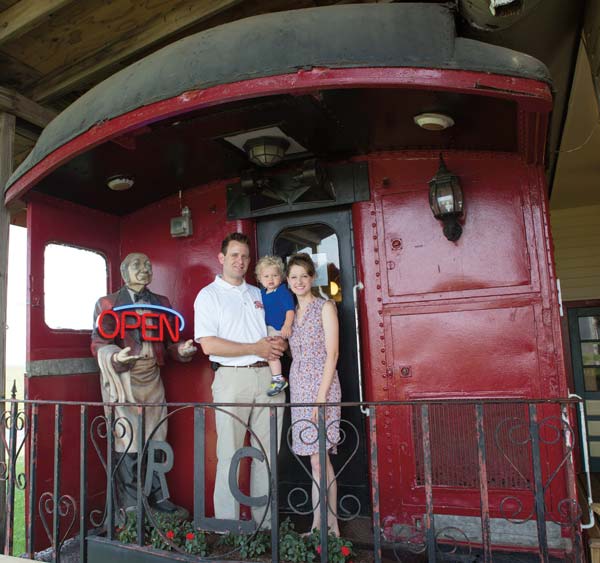 New owners, Tyler and Kat Prickett, pose with their son at the entrance to the dining car that is home to the Casey Jones’ Restaurant.