A historic mansion in Conoy Township, completed in 1811, stood for years in need of repair, waiting for the right person to come along and bring it back to life.

Elaine Jackson, with the aid of some very dedicated volunteers, became that person, slowly breathing life back into this once proud piece of history.

Elaine retired in 1999 after almost 36 years of teaching elementary school in the Elizabethtown Area School District. A longtime resident of Bainbridge, Elaine found she had no problem determining what to do next in her life. With a wide range of interests and a heartfelt need to serve others, she plunged forward into this new phase of life with gusto.

She still finds time to race walk in the Senior Games and regularly walks the Northwest River Trail for exercise.

Elaine’s volunteer spirit has garnered her many awards in Pennsylvania, Lancaster County and the local community. But one project in particular has always been dear to her heart: the restoration of the Haldeman Mansion, which is located in Locust Grove. Elaine has a soft spot for the longstanding mansion sharing, “I have a lot of passion for the old place, just because it is old and in need.” The Haldeman Mansion was placed on the Pennsylvania and National Registers of Historic Places in August 1977, and it is No. 6 on the Historic Preservation Trust of Lancaster County’s inventory of historic buildings.

The mansion’s history intrigues her. Completed in 1811, it’s known foremost as the birthplace and childhood home of Samuel Haldeman (1812-1880). Haldeman was one of the most noted philologists and naturalists in America during the mid-nineteenth century. While few people know about him today, he is regarded as one of this country’s most prominent men of science and letters.

The extent and depth of Haldeman’s knowledge was exceptional. His friend, Charles Darwin, shared that Haldeman’s paper on “Species And Their Distribution” helped him to form his own conclusions in The Origin of Species (1859). The publishers of Webster’s Dictionary frequently consulted Haldeman regarding words and their definitions.

Elaine’s involvement with the Haldeman Mansion Preservation Society has spanned 16 years, and in that time she has risen from treasurer to president (for the last nine years). After all these years she confides, “I still have a passion for this old building that has become a full-time volunteer job for me.” HMPS’s mission is to restore and preserve the existing buildings and grounds of the mansion property in an effort to promote history, education and community use.

HMPS is well-known in the area for its fun and entertaining fundraisers. The Strawberry Festival, which is held each June, is one of its most popular fundraisers. Last year’s was the biggest and most successful Strawberry Festival held to date. Elaine attributes its success to the long winter and the fact that people were ready for spring (and strawberries). No doubt, those same sentiments will draw strawberry fans to Locust Grove this year. A word of warning: the strawberry desserts go quickly, so come early!

“For our last Victorian Tea, we had so many people calling to register that some had to be turned away,” Elaine says of a recent benefit. She confesses that The Tavern Dinner has become her favorite event. Held in September, it features a five-course dinner served by wait staff dressed in period clothing.

Elaine throws herself into each event 100% – planning, cooking or doing whatever it takes to make an event a success. She is helped by HMPS members and volunteers. To run these events, she says one must be organized, “Without my computer, I’d be dead!” she reports.

Elaine admits she did not become computer literate until after she retired.  It does help that her husband Chuck, a computer consultant until he retired from the Department of Education in 2001, is there to offer help when it’s needed. Elaine and Chuck have been married 57 years and are blessed with two grown daughters.

When asked what is most important to her today, she answers, “Caring for my family. We have a close-knit family.”

This year’s Strawberry Festival will be held on June 7, 12-4 p.m. For more information about the Haldeman Mansion’s progress and mansion events/tours, visit haldeman-mansion.org. 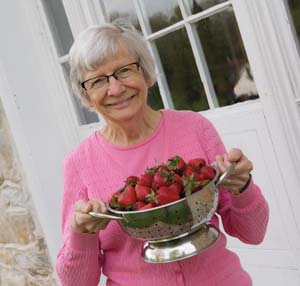