The term artisan has surpassed cliché. I can find an abundance of artisan breads and cheeses at market, artisan selections on the paint store color chart, and even artisan household cleaners. In 2013, the New York Times placed artisan first in its Words for the Dumpster op-ed. Artisan may have lost its grandeur, but being without a better descriptor by definition, I cannot introduce Kevin Lehman without calling him an artisan. What I can do is add words like altruist, visionary and champion.

Tucked behind a street-front apartment building on South Prince Street sits the behemoth building that was once home to Posey Iron Works. It is practically hidden, with little signage and no fanfare, but this is the home of Kevin Lehman’s Pottery and the Lancaster Creative Factory. It’s a weekday morning and the place is empty, except for Kevin, myself, and his 14-year-old dog, Hugo, who will follow us around the entire building.

“I do well at keeping this place a secret. I’m not a promoter. I get how all that stuff works, but …” says Kevin and trails off with a reticent tone. A couple minutes later he follows up with something that rings of a mission statement. “We try to cultivate creativity through education and physical arts and crafts.”

Kevin found this place in 2000. The 1994 Garden Spot High School grad had just finished up his education at Millersville University and The University of the Arts in Philadelphia and was looking for a place to fit his minimal budget; this former metal-fabrication facility was perfect for Kevin. The building had fallen into a bit of disrepair after the iron works closed its doors in the 80s, but with the area being part of the State’s Keystone Opportunity Zone program, he was able to work with the City of Lancaster to repair the structure, starting with a much-needed new roof. He points out a few framed photos by the entryway; essentially, he turned the building from potential rubble into a hub of artistic vision – call it a simple stroke of destiny’s artistic brush. He always knew he would live a life surrounded by creativity.

“Using a wheel, I touched clay in sixth grade, and I knew I was going to do this somehow, some way, in my life. This is the only thing I’ve ever done,” Kevin explains. He still has his original kiln, which he housed in a shed that afforded him just enough room to turn around while honing his art. He would create pieces in this shed until the winter winds made it impossible to keep water warm.

Now shielded from the elements, he introduces me to a showroom featuring works from 11 artists working in nine 150 square-foot studios in the massive space. “The artists have 24-hour access. They can come in whenever and do their thing,” Kevin remarks, as we move from the large, open, and industrially rough showroom into a comfortable, adjacent room reminiscent of a classroom. “They can work out of their own individual studios, or they can work in here, which is a common area.”

This is the heart of Lancaster Creative Factory, where the nonprofit offers a variety of classes, workshops and projects for every age. I’d known Kevin and several of his siblings from high school, but here is where I really learned what he is all about. Through LCF he has partnered with many community-minded organizations, including Lancaster County Youth Intervention Center, Veteran’s Victory House, and Schreiber Pediatric. “We do a lot of outreach programs to the youth prisons, homeless shelters and retirement communities here in Lancaster,” says Kevin. He’s proud of this accomplishment.

With Hugo in tow, we head back out into the showroom, past his old and quiet kiln, into another part of the massive structure. Throughout the multi-roomed space sit pieces of artwork of all shapes and styles. A colorful archway stands as testament to a past theatrical production based on mathematical theory of the Golden Ratio. A 6-foot human head, made of metal patchwork, will take full shape when rough-cut tree limbs are inserted into the frame. The piece was commissioned by the PA Department of Conservation and Natural resources and is a result of work by children from a local youth intervention center; this spring it will be seen somewhere on the Northwest Lancaster County River Trail.

Across the room is a side studio filled with glass-bead-making equipment, occupied frequently by a handful of artists. There’s a metal and wood-turning area inhabited mostly by Kevin’s dad, Joe.

“This is bigger than a collection of personal pottery. It is a community thing,” says Kevin, who gets his hands into paperwork more often than clay these days. But, he’s cool with that. A new version of his spirit has emerged. “My creative outlet is now answering the question, ‘how can I bring creativity to other people?’”

Despite the amount of time occupied by his responsibilities as founder and director of Lancaster Creative Factory, Kevin is still active as a working artist; five years ago he started a successful endeavor blowing glass with his father in the far eastern corner of the building. Most of the glasswork is privately commissioned for residential use – like home lighting.

Having reached the furthermost corner of the building, this is the end of my tour. Not that he has a list of buzz phrases, but before we part ways he floats a couple my way: self-confidence and self-esteem; little things can make a big difference; and positive impact. It’s been more than 20 years since I’ve stood in the same room as Kevin Lehman, but he sure made an impact in the half hour we walked around his art gallery/community outreach endeavor. His life is art, and he plans to make art an important part of the lives of many others. 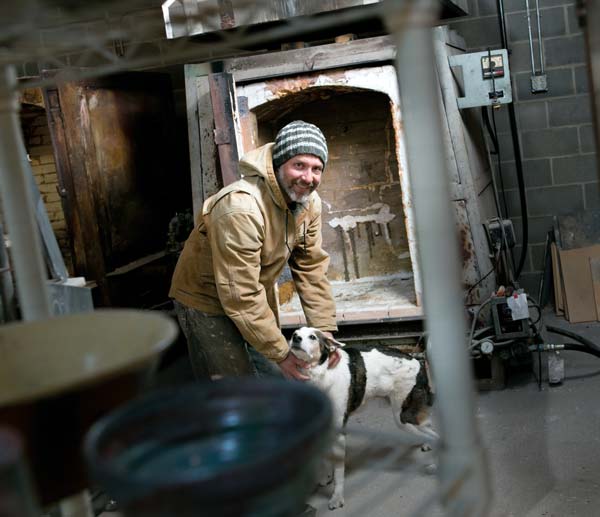 Kevin is always accompanied to work by his dog, Hugo.