If you’re already stressed by the thought of the holidays, heading for the hills might not be such a bad idea. Owning that proverbial mountain cabin – as many Lancastrians do – makes the dream of enjoying an old-fashioned Christmas a reality. And, to keep the old-fashioned theme going, let’s use cast iron to cook those holiday meals.

It just so happens that photographer Brian Donnelly has access to a dream location: He is a member of a rod-and-gun club near World’s End State Park, in the Williamsport area of north central (Sullivan County), PA. Talk about a breathtaking part of the world that most folks have no clue exists!

All that scenery and fresh air obviously stimulates the appetite. And, if you plan to spend the holidays in the woods, game and fish will undoubtedly be on the menu. The setting was perfect for featuring a few dishes that can be prepared in the great outdoors, while still doing justice to the various cuts of deer or fresh-caught fish.

You know what they say about everything old being suddenly new again. That definitely applies to cast-iron cookware. I’m sure many of you have memories of the cast-iron frying pans that were the workhorses of your mothers’ or grandmothers’ kitchens. I’d suggest if they aren’t using them any longer, offer to take them off their hands and get cooking.

The beauty of cast iron is that you can cook just about anything in the skillets/frying pans, Dutch ovens, etc.: breakfast items, casseroles, soups, stews, bread, pork chops, fried chicken, paninis, Italian, French and Asian. And, did I mention dessert? The list is endless!

Cast iron is also flexible as far as cooking methods go. It can do service atop the stove (gas or electric, and any surface), in the oven and over a campfire. The only method that’s not cast-iron-friendly is microwaving.

To keep your cast iron in top-top shape, seasoning is important. In the past, virgin cast iron had to be prepped: vegetable oil (bacon fat was often used) needed to be applied to its surfaces and then baked in the oven for an hour to create a natural non-stick surface. The good news is that most manufacturers now pre-season their products. However, according to Martha Stewart, if you inherit or buy a cast-iron skillet at a yard sale/auction, it’s probably best to follow the above seasoning directions before you use it.

Once you break in your cast iron, clean it in mild, soapy water, hand-dry it and rub a light coating of vegetable oil over it to maintain that non-stick surface. Never put it in the dishwasher. If rust develops, don’t attack it with a scouring pad; instead, remove it with vegetable oil. According to Lodge Manufacturing’s website (Lodgemfg.com), proper maintenance will result in longevity: 100 years or more!

Of course, with cast iron all the rage, the sources for new products are now plentiful. Tennessee-based Lodge Manufacturing, which is considered the granddaddy of cast-iron cookware, has been in business since 1896. Lodge, which is available through its online store and at Williams-Sonoma, has since added enamel cast iron to its menu (along with steel). LeCreuset (also available at Williams-Sonoma) dates to 1925; its products are still made at the original foundry in Fresnoy-Le-Grand, France. Its decorator colors are gorgeous. Companies such as KitchenAid and Cuisinart, as well as Food Network hosts such as Guy Fieri, have also joined the fray. 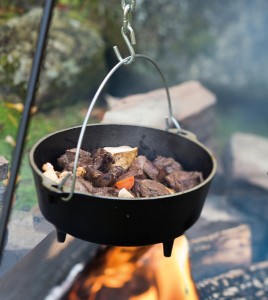 One of the easiest and perhaps most rewarding things to prepare in the great outdoors is venison stew. Typically from the leg, this stew meat starts out tough as nails and is sinewy (due to the connective tissues that are found throughout the muscles). But, this meat is also full of rich flavor – which, after that noble sinew transforms, has the potential to be the most fork-tender of all meats.

When properly stewed or braised – along with the typical carrots, onions, celery, potatoes and perhaps some wild mushrooms you scored out in the woods –
one may be hard-pressed to discern the difference between venison and beef stew. Some hearty red wine, a spoonful of tomato paste and fresh herbs … yum!

What makes it even better is the rig that we cooked it on: a Dutch oven on a tripod, suspended by a chain over an open camp fire. What’s not to love about that?

In a nutshell, you start the stew by searing the seasoned meat until it’s nicely browned. Then, add your vegetables and brown them up a bit. Next, add your flavorful liquids to cover. Adjust the fire and height of the pot so that a slow simmer is maintained and then go find some fun things to do for a while (you will need to check the pot from time to time). Once the meat is tender and the liquids have reduced down to a hearty, gravy-like consistency, it’s stew time. Of course, the same results can be accomplished in the warmth of your kitchen.

There’s nothing like waking up to the smell of fresh air, freshly brewed coffee and a hearty breakfast. Venison has a place here, too! One of the most coveted cuts would be the back strap. This flavorful part of the animal, akin to beef tenderloin, is in fact tender and mildly flavored. It’s often sliced up into steaks, mignons or medallions. When it’s quickly cooked over high, dry heat (as opposed to stewing) it’s a shoe-in for steak and eggs. Whether prepared inside, or outside on a good old camping stove outfitted with a griddle and a few skillets, your guests will leap out of bed. Fry up some eggs and home-fries, and you’ll be armed with enough energy for whatever fun and adventure the day brings. 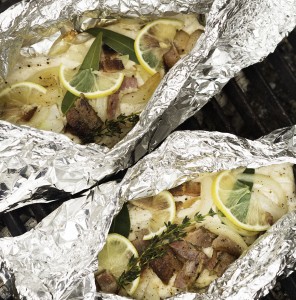 If you are lucky enough to have an extended trout season in your neck of the woods, perhaps a little fly fishing is in order. The Loyalsock Creek is considered one of the most productive streams in the state and the fish were aplenty on the day we were there.

One of the best and easiest ways to prepare fish outdoors is in aluminum-foil parcels. Top the freshly fileted fish with various aromatic ingredients (in anticipation of catching the fish, I fried up some bacon and onion on the fire and added some fresh thyme, a bay leaf, a little lemon, salt and pepper) and crimp the foil packets, then onto the fire they go. After a few short minutes, the juices release from the fish and mingle with the other ingredients. Steam is then generated, the foil puffs up and in no time, it’s time to dig in. It doesn’t get any easier than that! 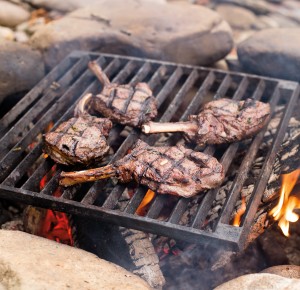 If I was going to whip up some venison fine-dining style – perhaps for Christmas dinner – I would definitely reach for the chops. Rack of venison is a truly celebratory cut. When Frenched – where the bone is clean and white – the cut looks proud and elegant on any plate. (Just be sure to save the meat between the bones for stew.) Ash-roasted sweet potatoes and Brussels sprouts would pair perfectly with the game meat.

When rubbed with a touch of olive oil, fresh herbs, garlic, a little citrus and vinegar, the chops can be grilled over a simple rock-rimmed fire, with a grill grate set atop the ashen wood. I used what is called a Tuscan grill, which is a heavy-duty, cast-iron grate with legs that happens to give nice, thick marks for added seared flavor. It doesn’t twist and contort with the heat, and can hold the weight of quite a few of those tasty “tomahawks.” Steven Raichlen, of Barbecue University and Primal Grill fame, has one available through his online store: Barbecuebible.com (or through Amazon.com). A few minutes on the grill, a few well-timed turns and just a little steak-grilling know-how, and this is one cut that is sure to please.

What makes cooking like this a blast is that it’s not an exact science. That fire is alive and has a mind of its own; it’s the challenge of taming it that brings a little spice to the finished dish. I’m telling you, when you set up like this – grilling over an open fire set on the banks of a flowing creek – and then taste that first bite, it’s impossible not to feel thankful to be alive. 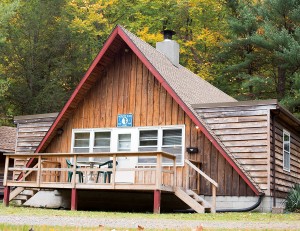 Many of today’s rod-and-gun clubs can trace their roots back to the post-World War II era. Cliff Stamm – whose late father, Earl Stamm, is one of the founders of the World’s End club – surmises that quite a few vets found it difficult to give up the camaraderie they had shared during wartime and formed clubs through which they could maintain those special relationships. The old adage of vets sitting around a campfire and sharing “war stories” may have some credence.

World’s End Rod and Gun Club was founded by a dozen men from the Lancaster-Ephrata-Reading area in 1945. A log cabin that sat on the property they purchased served as the clubhouse. In 1965, the club’s acreage expanded when its members bought 95 acres that were adjacent to their lot. “It was priced at $5,000,” says Cliff, who is the current president of the club. “That was a lot of money back in those days.” And, the acreage wasn’t prime land. “It was swampy,” Cliff recalls of the area where members wanted to build a new cabin. “They had to bring in boulders and a lot of fill to improve it. I remember going up there nearly every weekend to work on the place.”

The new cabin, which dates to 1966 and was crafted from spruce from Washington County, took the shape of an A-frame. “What made it unique is that it had two wings,” Cliff explains. Ephrata-based Gooding, Simpson & Mackes provided the A-frame’s roof. “I believe one of the Mackeses was a member,” Cliff notes.

Over time, club membership grew to its present-day 16 (the last original member passed away a few years ago). “We come from all walks of life,” says Cliff, referring to the range of careers that are represented. “We run it like a business,” he says of the meetings that are held, the bylaws/covenants that were adopted, the work weekends that are required and the reservation system that is in place. New members are admitted at the recommendation of current members.

Now, nearly 50 years later, the A-frame is getting spruced up. A new kitchen was recently installed and a more efficient heating system will make the cabin cozy in the coldest of weather. Furniture in the common areas is donated by members. During hunting season, it’s a male-only domain. “Our wives and kids enjoy it, but when it comes down to it, it’s still kind of a guy’s place,” Cliff notes. 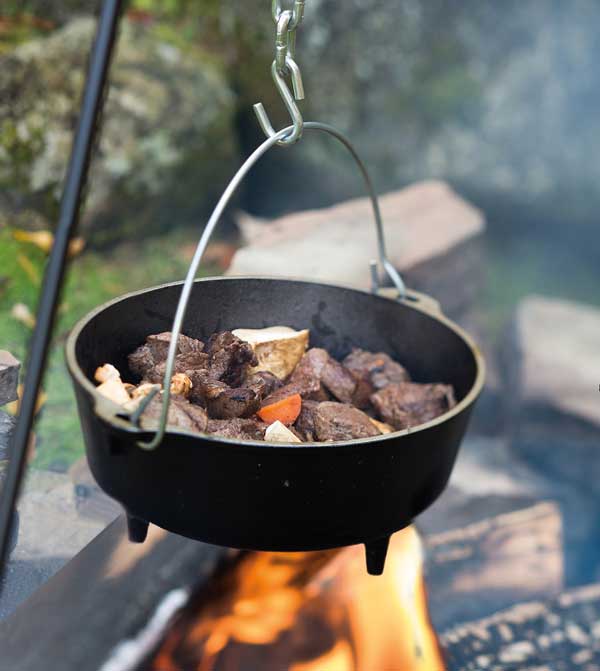