Knowing I had to write about the trail, I thought it would be a good idea to walk it. So, on a gorgeous afternoon in late August, I asked Miss Paisley (my dog) if she’d like to go for a walk. Upon hearing the word “walk,” she made a beeline for the front door. Little did she know that our regular jaunt around the neighborhood was being replaced by a stroll along the river.

We arrived early in the afternoon to find parking at a premium. This was one busy place! I couldn’t help but notice how many people were negotiating the trail on wheels; the mode of transportation ranged from tricycles to wheelchairs. I was also struck by the number of young people – toddlers to millennials – on the trail. It was gratifying to know that Mother Nature still trumps cell phones and PCs.

Incredibly, I saw someone I knew. Jared Erb, a designer with the Custom Home Group, came whizzing by on his bike. It was his second time on the trail. “I didn’t even know it existed until I saw it on the website, traillink.com,” he explains of discovering it mid-summer. While he’s a fan of the Enola Low Grade that’s farther south, he finds the Northwest to be “the most interesting,” due to the variety it offers: river views, wooded areas, farmland, vintage photos, historical comment, and, of course, the White Cliffs of Conoy.

Jared also noticed the youthfulness of the trail’s users that day. “It is encouraging to see more and more young people out enjoying nature,” he says, adding, “I think it’s a wonderful use of tax money, and I’m glad to see the local municipalities investing in projects like this. I hope they finish it all the way up to Harrisburg.”

That is not inconceivable. Hopefully by year’s end, the entire length of the trail – 14.5 miles, stretching from Columbia to Falmouth – will be open.

The Conoy Township portion of the trail began welcoming visitors late in the summer of 2014. In anticipation of increased traffic, the American Legion’s Koser Park, where the trail can be accessed in Bainbridge, was given a facelift. It’s the perfect spot to enjoy the river – or a picnic – before or after you tackle the trail. Ample parking is available and on busy days, an overflow lot is open.

Steve Mohr, who has been a Conoy Township supervisor for 28 of the past 30 years, grew up in Bainbridge. The river was his playground. The Mohr brothers, other family members and friends spent their free time fishing and hunting along its banks.

In the early 80s, Steve learned the bankrupt Penn Central Railroad was being ordered to liquidate its holdings. “I hated the thought of it becoming private property,” he says. “That would have ended our access to the river.” So, Steve approached his brothers and father with the idea of buying the stretch of land in Conoy Township that in places was only 80 feet wide. Initially, his father wasn’t receptive to the idea. “He wanted to know what the heck we were going to do with it,” Steve recalls. The younger Mohr explained they could share it with the public as a recreation area. His father was dubious, saying people were too busy to take the time to walk along the river. Still, he acquiesced, and the Mohrs bought the riverside acreage.

When Steve became a Conoy Township supervisor, he approached his colleagues, Bob Strickland and Joe Kauffman, with the idea of buying the riverfront that stretches north from Bainbridge to the Dauphin County line for recreational purposes. While they were receptive to the idea, they were hesitant, not knowing where the money would come from to pay for the purchase. “So, I approached [County Commissioner] Jim Huber,” Steve recalls. Commissioner Huber arranged for grant money. With the help of volunteers, a trail between Bainbridge and Falmouth was constructed. “It’s pretty primitive, but we’re going to start upgrading it next spring,” Steve says. “I’d love to see it hook a right and connect with the Conewago Trail that goes through Mt. Gretna.”

The Mohrs eventually sold their parcel to the Lancaster County Solid Waste Management Authority, which in turn leased it to Conoy Township as part of the Northwest trail. “Solid Waste Management has been a good neighbor to Conoy,” Steve says. “They’ve helped us go from a poor township to one that is able to operate more freely.”

The 10-foot-wide trail, which sits atop what had once been the Pennsylvania Canal (1833-1860), features a paved surface. In places, it’s immediately adjacent to tracks used by the Norfolk Southern Railway. The trail winds its way through woodland that was once the hunting grounds of the Shenks Ferry Indians, who lived in the area from the 13th to 16th centuries. Sweeping river views take in landmarks such as a series of rapids called the Haldeman Riffles. Also of note is the Haldeman Mansion, which was the boyhood home of naturalist and philologist Samuel S. Haldeman. At one point, the trail transitions into a bridge, under which the Conoy Creek spills into the Susquehanna.

Beyond that you’ll spy the remains of a once-thriving industry that entailed the production of limestone and dolomite. In 1846 John Haldeman launched a limestone quarrying business. Farmers purchased the burned limestone for fertilizing, whitewashing and plastering purposes. Steel factories utilized the dolomite to remove impurities in the metal.

In 1895 the quarry was sold to John E. Baker and George Billmyer, who added limestone crushing to the business. A company town soon took root. Called Billmyer, the town eventually grew to 1,000 residents, due in part to the fact that dolomite was in high demand during World War I. Out of that demand, the White Cliffs of Conoy emerged. Waste material from the processing of the limestone and dolomite was dumped along the river banks. “We just might be the only recreation area in the country that’s built atop an industrial waste dump,” Steve says. The trail travels along what had been Billmyer’s Main Street. Remnants of the factory (razed and salvaged in 2004) and the town – row houses, a church, a school, a store and a post office – can still be seen. Like many company towns, Billmyer didn’t have the best reputation. Still, Steve and his brothers frequently passed through Billmyer on their way to the river. “It was one of those places that if you weren’t careful, you’d find yourself in trouble,” he recalls.

Steve reports that one of the quarry’s last employees, Norman Tyson, who just celebrated his 101st birthday, now lives near the trail’s Decatur Street access in Marietta. “He often rides the trail on his scooter,” Steve says.

Billmyer’s water-filled quarry, which until recently was home to the Bainbridge Sportsmen’s Club and the Bainbridge Scuba Center, has been sold to the Lancaster County Solid Waste Management Authority. The 93-acre parcel includes the 27-acre quarry. “I’d love to see it used in some recreational capacity,” Steve says.

Further downstream are a picnic grove and a clearing from which you can study eagle activity on an island in the river. A short walk then delivers you to Shocks Mill Bridge, an arched, stone, low-grade railroad bridge that was built in 1903. “It was critical to the war effort during both World Wars,” Steve says, noting that it served as this region’s Midwest connection to the East Coast. “Because of that, it was protected by armed guards during both wars,” Steve explains. In 1972, its center section was destroyed by Hurricane Agnes and was quickly replaced, enabling train traffic to continue using it. Today, it serves as a major route for transporting oil from North Dakota to points east. “It required some engineering to get the trail under and through the bridge area,” Steve remarks. “It took major cooperation and blessings among Conoy, LCSWMA, DEP, NCNR and Norfolk Southern.”

Steve says the trail reflects the best of what government and private interests can achieve when they work together. He points to a 200-acre tract of land in East Donegal Township that was critical to the development of the trail. “We partnered with them to buy it,” he notes.

But, according to Steve, he derives the most satisfaction from seeing people use the trail. “We get visitors from all over the place, as far away as Minnesota,” he says of people he’s met over the last year. “And, it’s not just on weekends, but throughout the week. You see the same faces using it every morning and evening. I wish my mom and dad had lived long enough to see it,” he muses. He points out that last year’s frigid weather created a new venue for fans of winter sports. “We didn’t clear the path, so cross-country skiers used it, as did a person who has a dog sled.”

Local businesses are benefitting, too. “We installed bike racks, so people can leave their bikes if they want to walk over to the Bainbridge Inn or up to Gigi’s,” he says. “You know, one night I was down here, and the pavilion in the park was filled with people eating ice cream,” he says of Gigi’s specialty.

Kathy Wagner, who lives in Bainbridge and writes the Second Act column for this magazine, notices that bike riders are coming off the trail to explore the town. “A lot of people stop me to ask questions about our town,” she says. “I think it’s nice that they’re interested.” 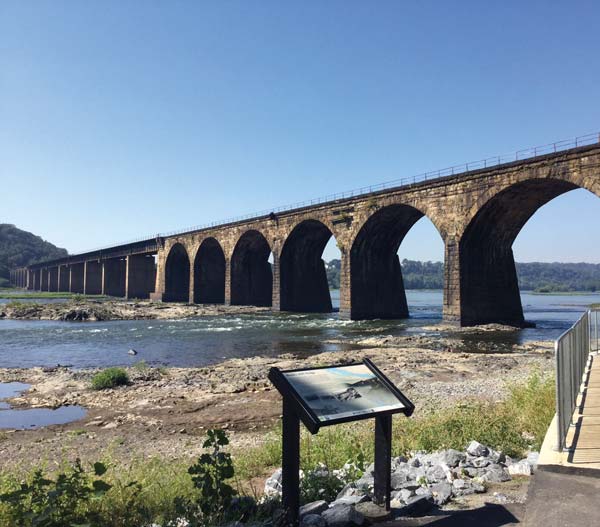 Shocks Mill Bridge, which crosses the river between Marietta and Bainbridge, was critical to the war effort during both World Wars. The bridge, which was built in 1903, originally consisted of 28 arches. The center section of the bridge was destroyed during Hurricane Agnes (1972) and was replaced in a timely and cost-effective manner so as to not disrupt rail traffic. As with many significant stops along the trail, small kiosks relay history through archival photos and commentary. Photo courtesy of Steve Mohr.