When our client’s bag of tricks is even flashier than our own – what a party! And, what a pleasure to plan.

They have been in the business of making top-name concerts, internationally-broadcast award shows and Olympic events shine in staging, lighting and sound for over 30 years. Clair Global and TAIT Towers, the creative geniuses behind Rock Lititz, were ready to throw a party of their own to launch their new Rock Lititz Studio, a 52,000 sq. ft., seven-story colossus, outfitted to the T for its live entertainment-industry clients.

The grand-opening celebration was a chance to show what Rock Lititz will do as “the backstage of the world.” Creating the “backstage experience” for the party’s guests became the event’s theme, guided by the live-entertainment industry’s masterminds at TAIT Towers, Atomic Design and Clair Global.

Guests were directed to enter through the facility’s “stage door,” a no-frills overhead garage-door entrance, where they were met with a typical show’s underworld – the backstage floor, located under the stage – in authentic twilight backstage lighting, with equipment road cases lining the walkway. The path continued under the stage and opened to reveal what would be a show’s general-admission, floor-level area. This was the party space for its 770 guests.

for days in advance, the rock-concert de rigueur haze was sprayed into the atmosphere to make visible the beams of light emanating from the scores of stage lights that filled the space high above the guests. High-top cocktail tables were made by upending sound and lighting equipment cases, with shipping labels and company logos – not props, but the real deal.

Then, the party’s money shot: Like rock stars, three of the four partners behind Rock Lititz, its general manager Andrea Shirk, and Pennsylvania State Senator Mike Brubaker made their entrance to AC/DC’s “Highway to Hell” atop decking 10 feet above the guests and making their way onstage. Following brief remarks expressing both gratitude and congratulations, the three partners approached a huge power switch, plugging in the connections and flipping the switch to officially “power up” Rock Lititz. The power surge cued pyrotechnics, the firing of 12 pounds of confetti into the air and a jubilant audio promise in Queen’s “We Will Rock You” as spotlights lit the 100-foot space above the crowd. A huge telescoped chandelier (created by TAIT Towers for MTV’s Video Music Awards the previous month) came into its mechanical life, undulating over the amazed, elated guests. 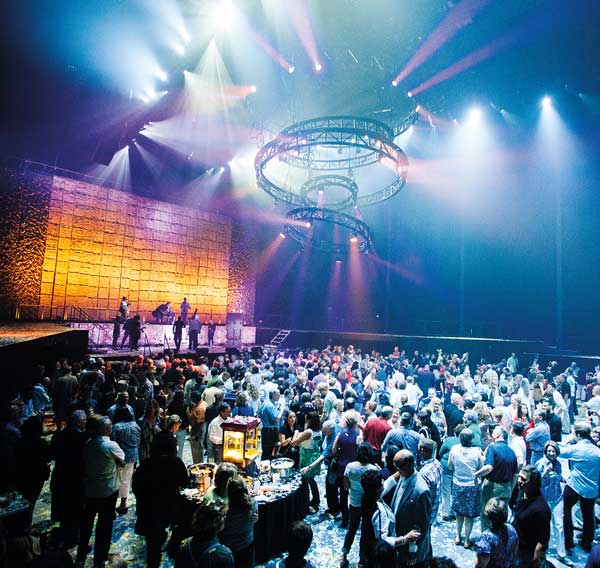 From developing the party’s creative design components to orchestrating their elaborate setup, the Lititz-based strategic partners Clair Global, TAIT Towers and Atomic Design were in their element.