Tommy Marion is a snowbird. The 74-year-old front man for The Nomads takes flight for Florida every October and usually will not peek his head north of the Mason-Dixon line until spring. That’s the routine, but he and the rest of the Lancaster-based rock ‘n’ roll band will never turn down a winter gig if nostalgic folks want to rock the night away to jukebox hits from the ’50s and ’60s. 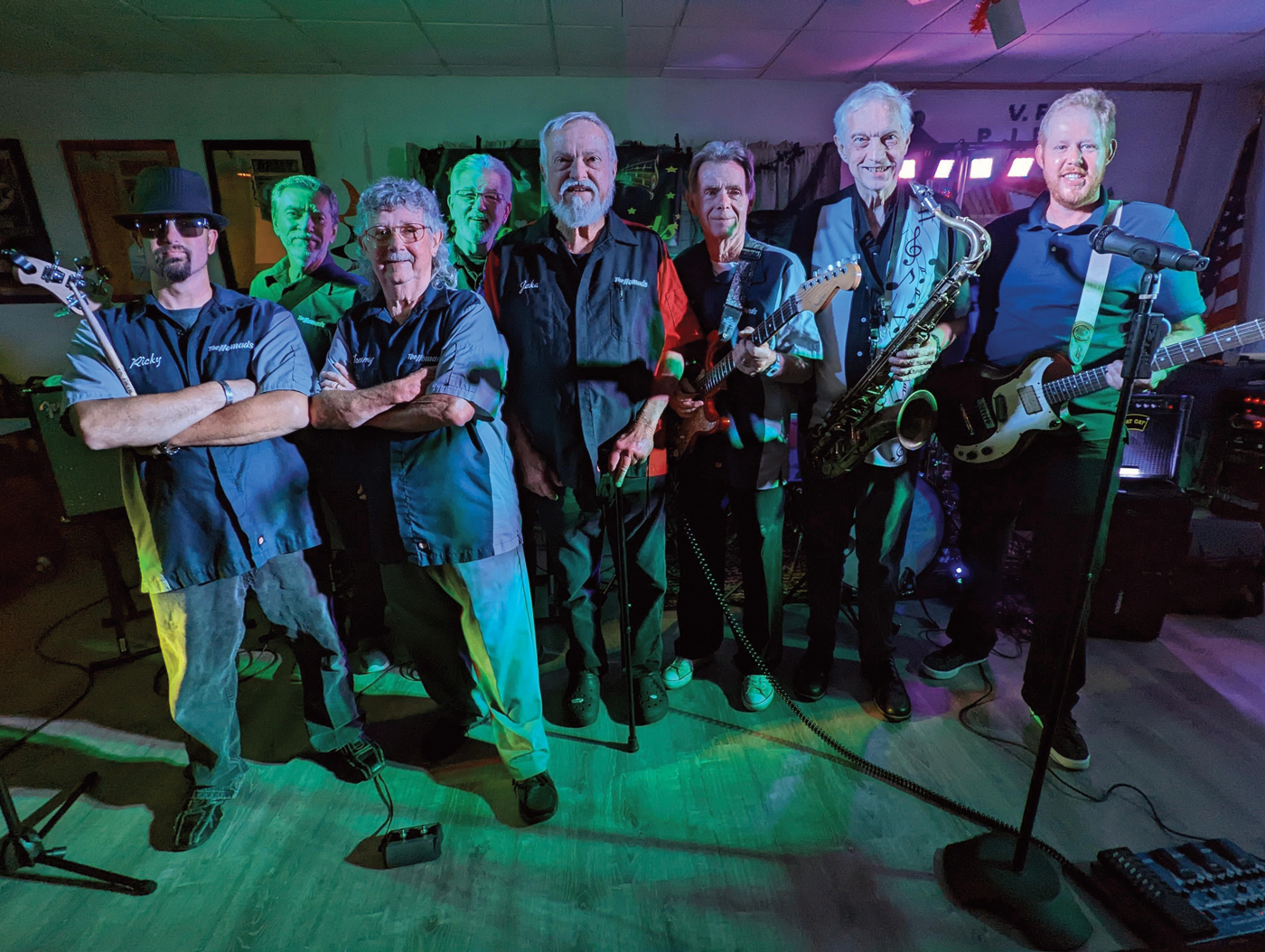 Rockin’ Robin, recorded by Bobby Day and performed regularly by The Nomads

As an October chill set into Lancaster County, The Nomads had one last practice before their final show of the year. To prepare for it, members trickled into guitarist Bruce McComsey’s basement.

Lit by neon beer signs and strips of lights fastened to the drop ceiling, the spot has been a practice pad for a long time. The space feels like the “sounds of the oldies.” Vintage guitars and autographs to the band hang on the walls with pride. I almost expect to be offered a draft of Schmidt’s or Straub beer from the tap behind the bar.

After a couple minutes of tuning instruments and talking about their musical beginnings, the band rocks out the set list for their next show. 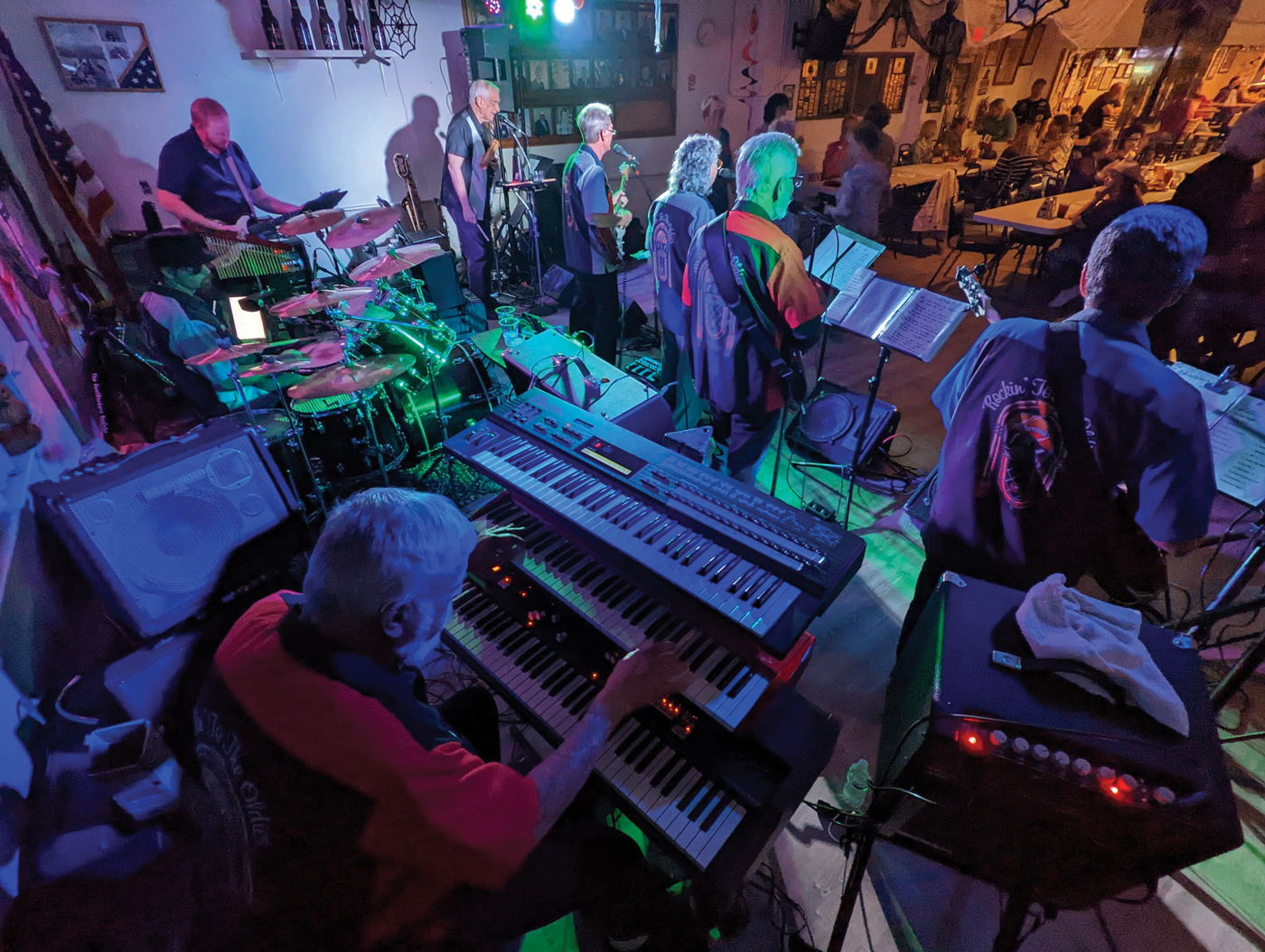 While the personnel for The Nomads has changed –
and gotten a little grayer – over the years, The Nomads have kept music lovers dancing to the oldies since 2004.

Like many great rock ‘n’ roll acts, the lineup for The Nomads has changed over the years. The band traces its beginnings back to 2004, when Donny Meckley on bass and three other musicians, including founder Bobby Jeffries, played for a birthday party. A year later, Ricky McCauley took over the seat behind the drums and they continued as a four-piece group for the next five years.

Ricky got his first drum set at the age of 6. From behind the drums Ricky sings Elvis’ An American Trilogy and a few other tunes at The Nomads’ shows. He may be one of the youngest members of the band, but other than Donny, is the longest active member.

Donny first picked up a six-string in his early teens. Fast forward about 35 years – he’s now 67 – and he began playing the four-string because the original Nomads lineup needed a bass player. At that time his brother, Butch, was the guitarist. 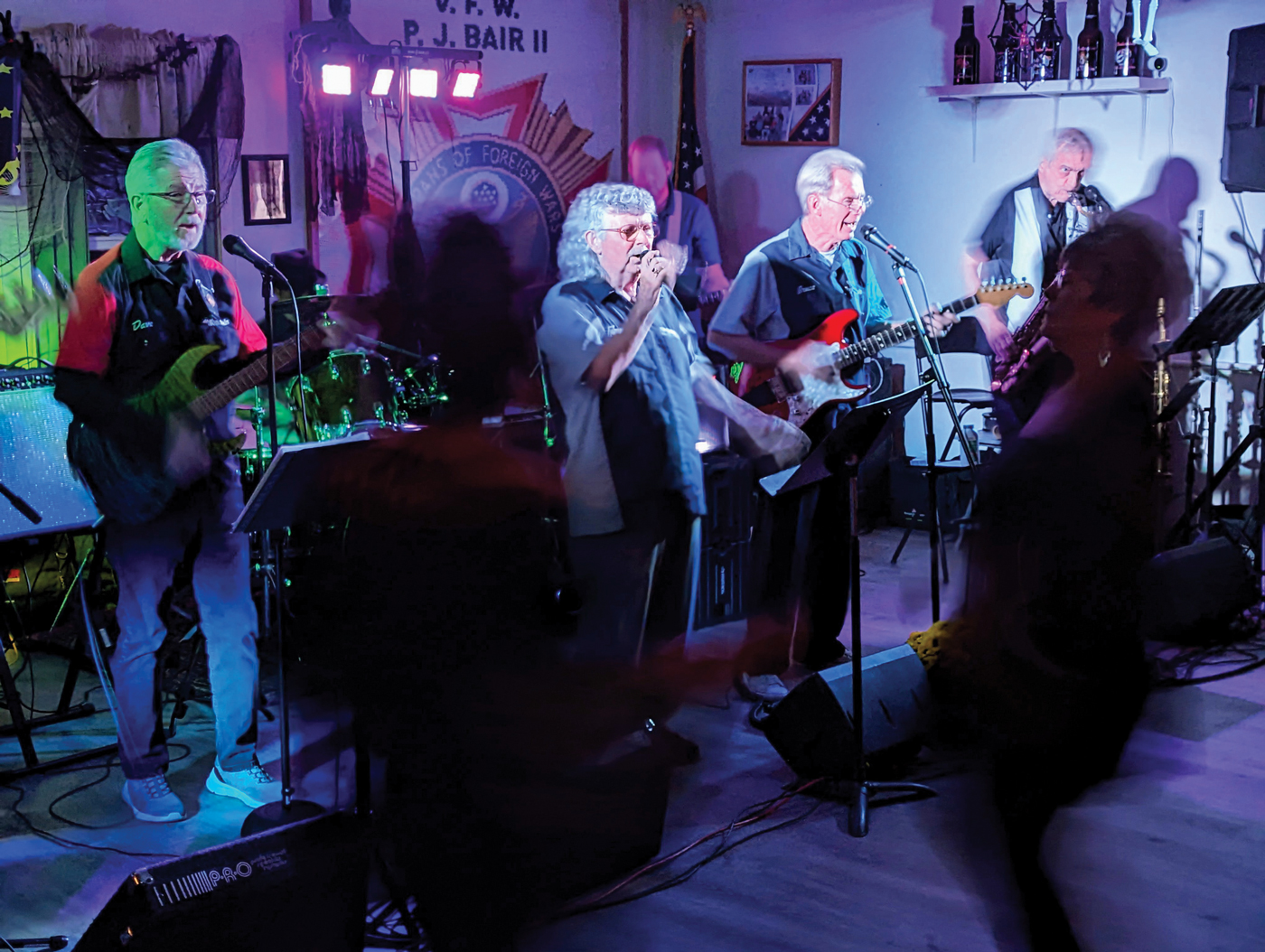 Lead singer Tommy Marion has been singing since he was 15 and has performed with such bands as the Roof Rockers and The Embers. One of his favorite songs to perform is Jay and the Americans’ version of This Magic Moment. Released in 1968, the song spent 14 weeks on Billboard’s Hot 100 chart, climbing to No. 6 on March 1, 1969.

“And the rest of it is history,” says Ricky. The other members, now numbering eight, joined over the years as needed.

Leading the group of musicians in a Q&A around the practice space, I soon learn there is a lot of local history in these musicians. Most had a family member who inspired or cultivated their passion for music. Ricky’s father, for example, was a member of a Bucks County drum and bugle corps.

Bruce got a guitar, while his twin brother got a drum set for Christmas when they were 14. They started a “little band with the kids” from Cabbage Hill; the band, Modified Version, still gets together to play for fun. Bruce’s family is comprised of a long line of musicians dating back to the 1930s and his uncle helped start the Lancaster-based Roof Rockers in 1997.

Dave Seifert picked up the guitar at the age of 8. “I have to give credit to a man named Dale Blank. He played country and western, and he asked my mom if her son could go out in clubs and barrooms and play,” recalls Dave. As one would expect, his mother said, “No.” But as the weeks went on, Blank persisted and Dave’s mother eventually gave in – but only if he carried a permission note with him to the bar. From his time playing three-chord country as a kid until now, Dave has always played with bands around southeast Pennsylvania and sometimes with keyboardist Jake Law. 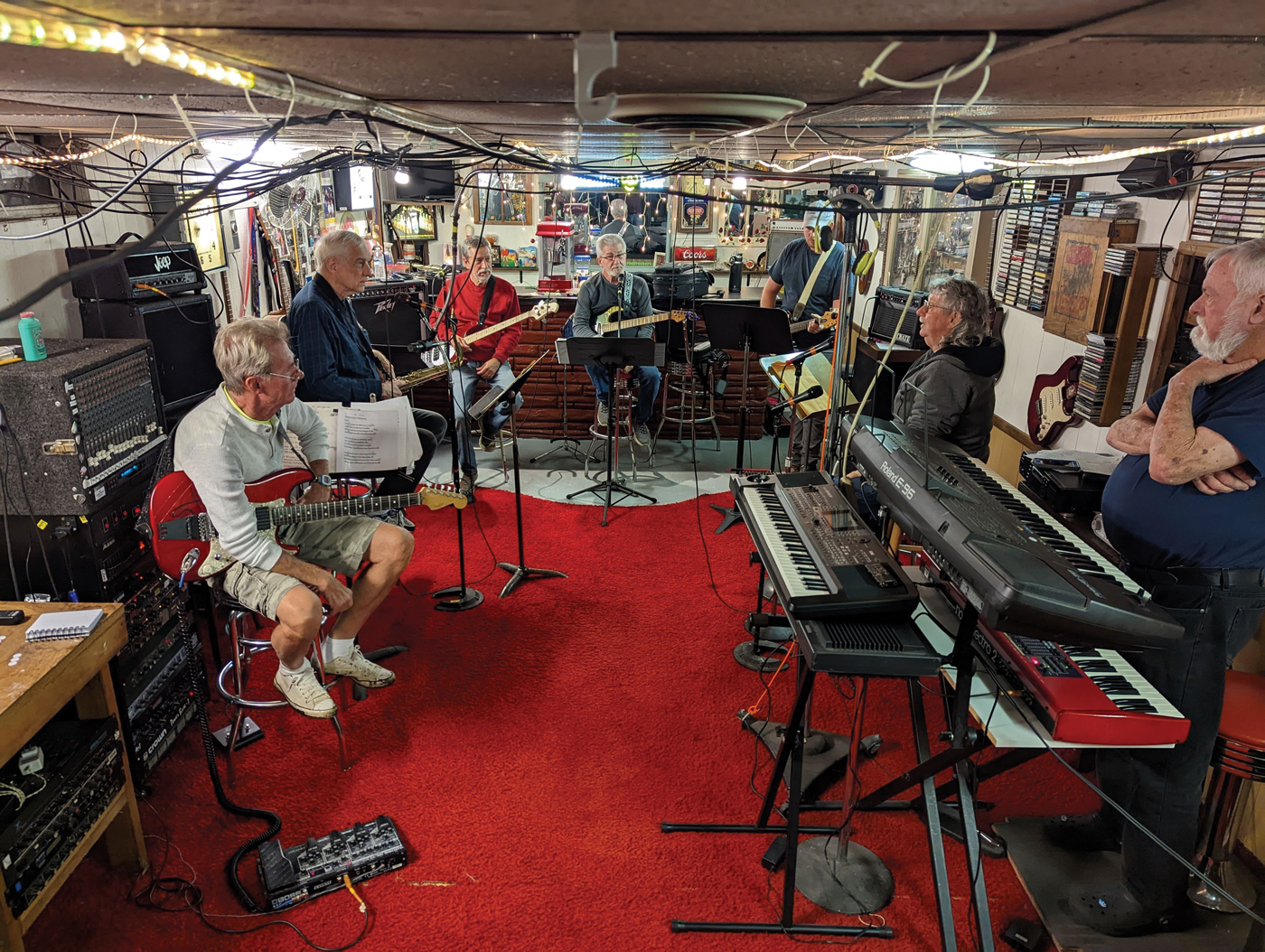 Bruce McComsey’s basement has been the scene of practice sessions for The Nomads for years.

Jake joined the band in 2009. He started playing Hammond organs – his brand of choice – when he was 10 years old; at the age of 15, he took a job as the skating rink organist at Overlook in Manheim Township. After serving in the U.S. Navy, Jake returned to Lancaster County in 1973 and has been playing in bands – like the now-defunct classic rock cover band Beechwood – ever since. He’s self-taught and plays by ear.

Pete Souders was in college in 1962, when he was approached to play horns in “Mr. Entertainment” Phil Long’s band, The Romans. He started on clarinet in fifth grade. “I added tenor sax in 10th grade and played in the usual school band stuff,” says Pete. He went on to play with several local road bands and was heavily influenced by New Orleans rocker, Lee Allen.

Chris Sherr is the new kid on the block, having only been with The Nomads for a year. He started playing trombone in school – jazz, concert and marching bands – and by his senior year “got a little more wild” and picked up the guitar. Twenty years later, he is the newest member of The Nomads.

As for Tommy, “I have an instrument right here,” he says, pointing to his throat. “And as long as it holds up, I’m not going to stop.” He is a natural front man, quick with the cheesy joke and witty with banter between himself, the band and the crowds packing into parks and clubs to see The Nomads. His 59-year career as a troubadour of doo wop, rock and chart toppers started when he was 15. He sang with the Roof Rockers, The Embers and several other bands Lancastrians might remember from over the years. “I don’t regret a minute of it,” he says. 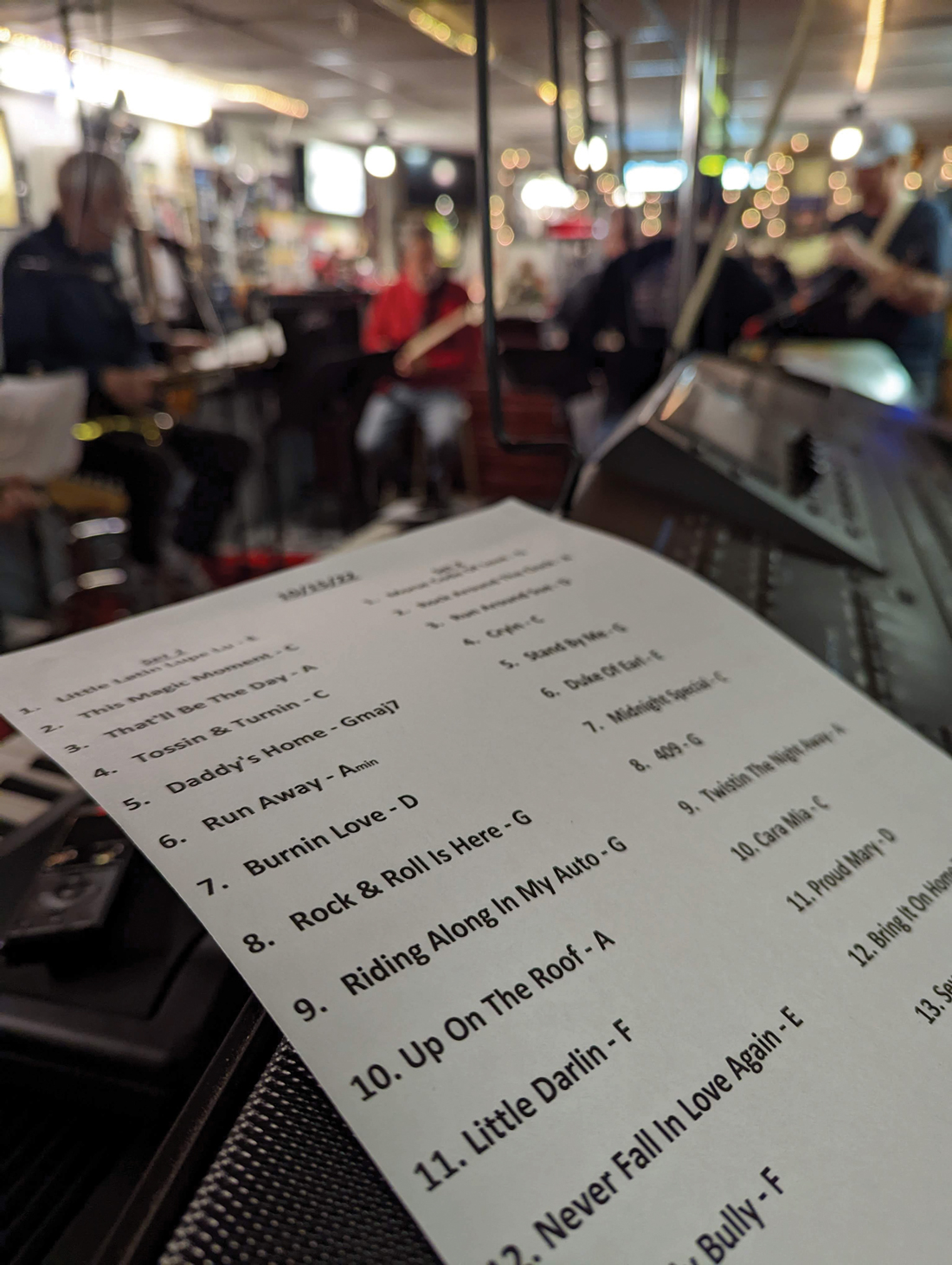 The band’s playlist includes such hits as Up on the Roof, I’ll Never Fall in Love Again, Burnin’ Love, Daddy’s Home and many more.

A female voice can sometimes be heard singing with the band. Phyllis McComsey, Bruce’s wife, who runs the sound board for the band, recently started practicing with the ensemble and stepping up on stage to perform Proud Mary and Da Doo Ron Ron.

After the trip down memory lane, I wanted to know which songs are their favorites to perform. Ricky enjoys the harmonies of the Shep & The Limelites’ hit, Daddy’s Home, from 1961. Donny is into classic rock, so his favorite is Brown Eyed Girl by Van Morrison. Bruce loves the power and beauty of Cara Mia, which was a No. 4 hit for Jay and the Americans (sung by Ricky when played by The Nomads).

Jake enjoys Rock and Roll is Here to Stay, which was originally recorded by Danny & the Juniors in 1958 and made famous by Sha Na Na in 1969. Pete claims Rock Around the Clock, since he has played with several members of Bill Haley’s bands over the years. Chris likes to play You’re Sixteen, first cut by rockabilly artist Johnny Burnette in 1960 but ingrained into the collective rock psyche by Ringo Starr. 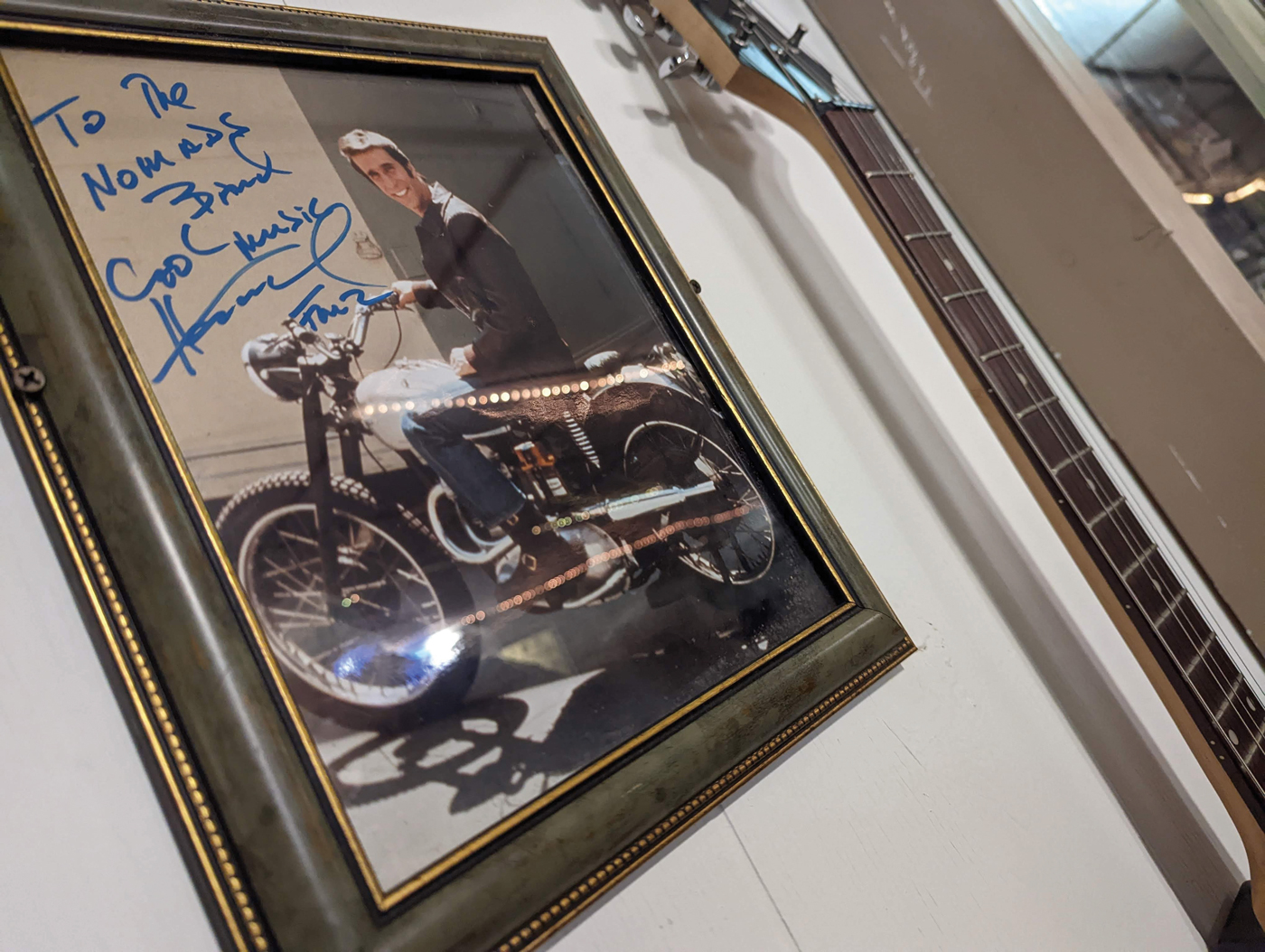 Henry “The Fonz” Winkler complimented The Nomads on their “cool music.”

“It wouldn’t be fair for me to pick just one, but if you’re going to put me in the corner, I’d have to say This Magic Moment by Jay and the Americans,” says Tommy, to which Dave agrees.

Now that winter has arrived, Tommy is relaxing in the Florida sun, maybe working on some new jokes. He will be back this spring, unless someone calls in need of an oldies rock ‘n’ roll band for their New Year’s Eve party. One of their first public gigs is always at New Holland Community Memorial Park, where the dance floor is always packed with baby boomers who are more than happy to share their twist, calypso and shag techniques with the younger generation.

While the personnel for The Nomads has changed – and gotten a little grayer – over the years, The Nomads have kept music lovers dancing to the oldies since 2004.