Nationwide, sales of electric bikes (or e-bikes) grew by 145% in 2020, outpacing sales of all other bike styles. I was one of those people who jumped on an e-bike that year. I endured the naysayers claiming my ride was not a “real bike” or that I was “cheating.” Now, e-bikes are everywhere. With its fat tires, leather grips and bulky frame, my bike still turns heads and prompts questions. So, I thought I would write an e-bike primer and get caught up on the newest trends from two Lancaster County e-bike specialists. 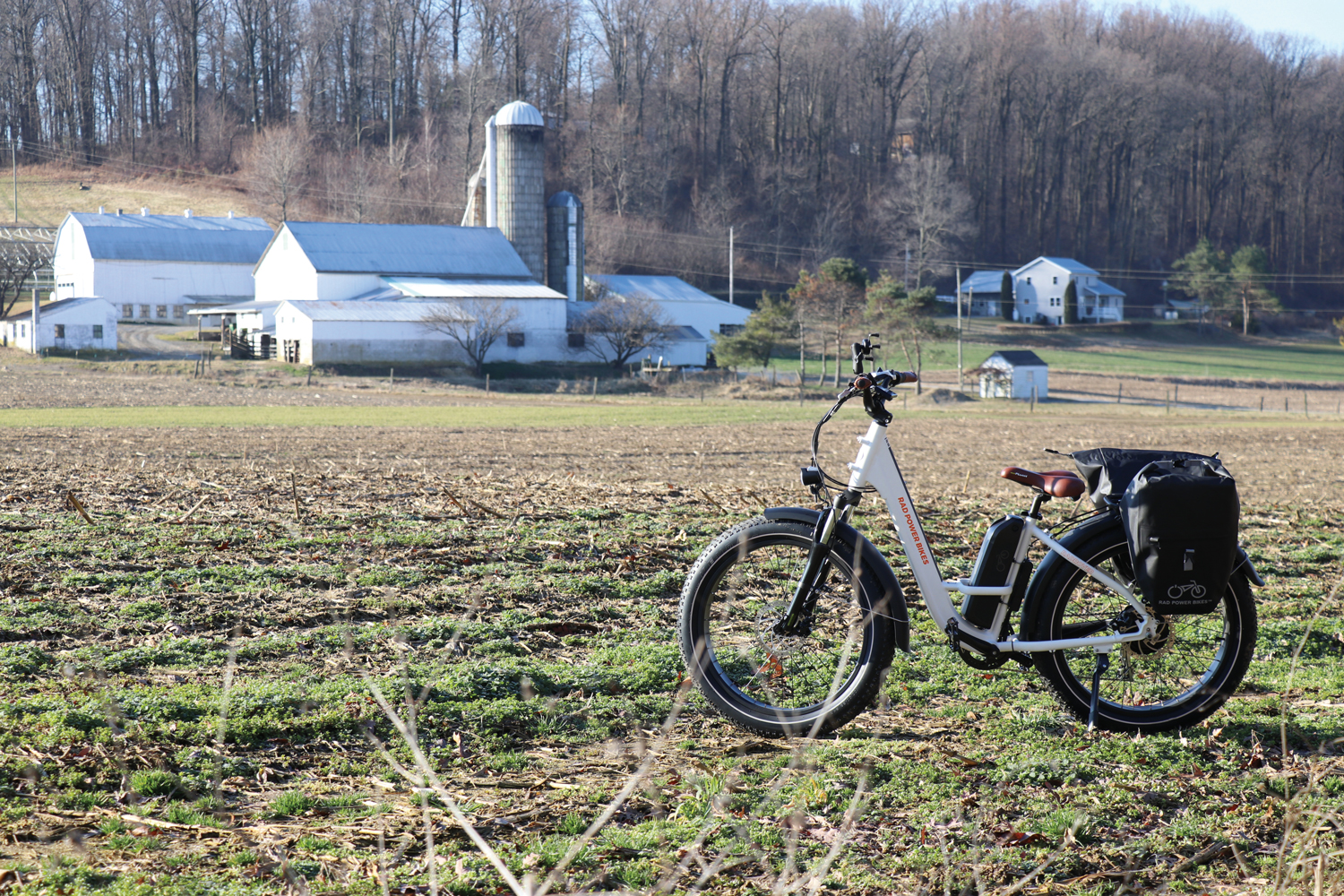 When gas prices were sky high, Michael Upton elected to park his car and rely on his e-bike for running errands in and around New Holland. Now, using the bike to visit the grocery store, post office, a coffee shop or a farmstand is just second nature.

First up, classes and styles. Several years ago, advocacy group, PeopleForBikes, and the Bicycle Product Suppliers Association helped establish three classes of e-bikes. Most fall into the Class 1 category, which are simply two-wheel bikes powered by pedal assist only; pedaling is made easier with the use of an electric motor helping the wheels spin. In addition to pedal-assist technology, Class 2 e-bikes have a throttle to propel the bike forward without pedaling. Top speed for Class 1 and 2 e-bikes is limited to 20 mph. Class 3 e-bikes are specialty items, a.k.a. not for beginners, and can reach speeds up to 28 mph.

Styles range from mini to racing bikes. The most popular style of e-bikes is the commuter bike, which looks most like a regular bike but with motor assist. The second most popular style is a tie between fat-tire bikes and city cruisers, which often incorporate racks, baskets and other accessories, and are built for ease and comfort. My bike is a combination of these two styles.

I ride a RadRover Step-Thru by Seattle-based manufacturer, Rad Power Bikes. It is a beast; weighing in at over 70 pounds without my twin panniers (saddlebags), it is a tough pedal without electric assist, so I always keep an eye on my battery gauge. Charging my bike’s battery takes approximately six hours and will provide me with a max range of about 45 miles. As with any e-bike, the length of time a battery charge will last depends on riding conditions and how much pedal assist or throttle is employed. The five levels of pedal assist on my RadRover allow me to climb the hills of eastern Lancaster County with ease. 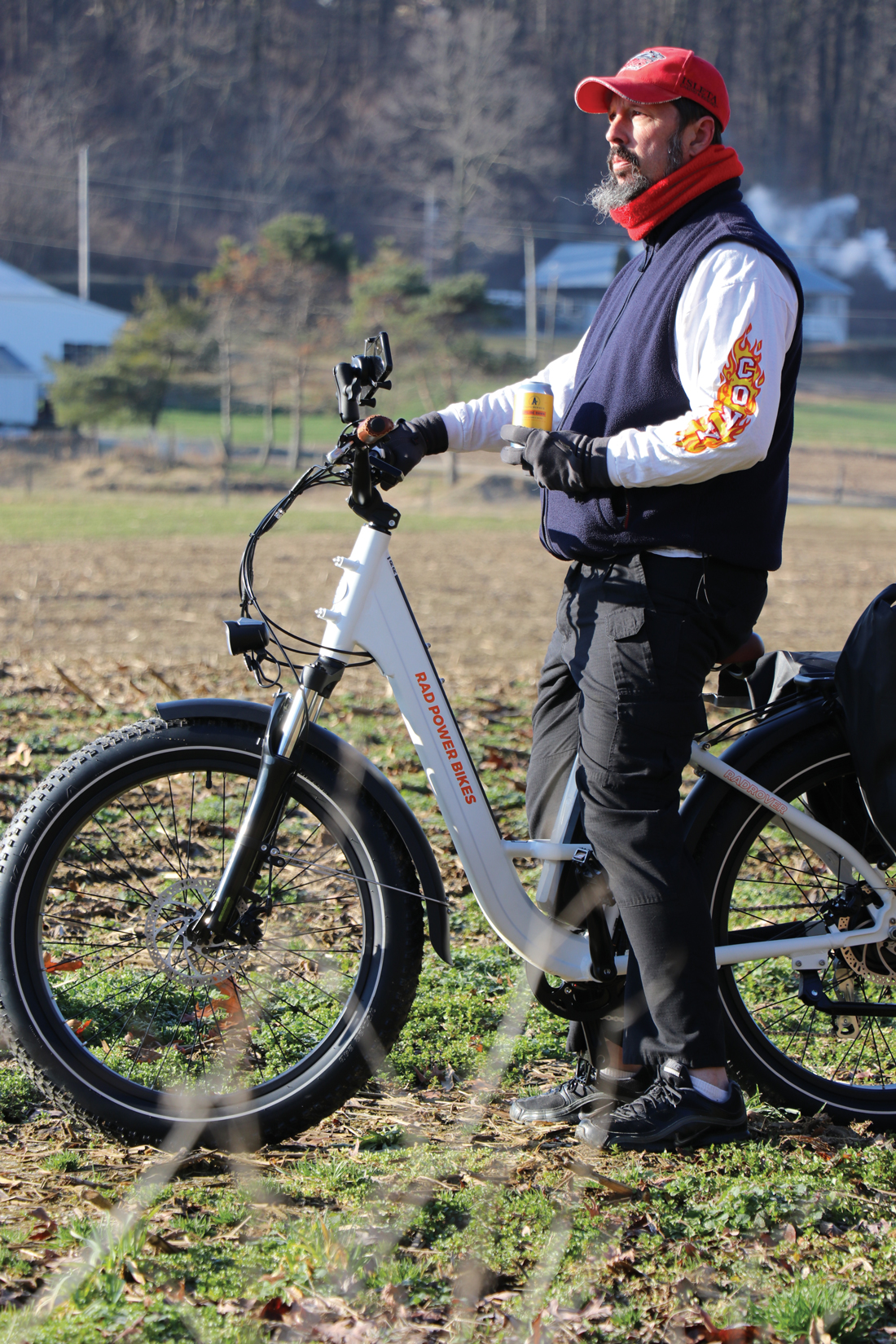 Michael’s e-bike, which he purchased in 2020, features a step-through frame, a battery with 45 miles worth of charge, fat tires and the ability to accommodate twin saddlebags. The only detriment is weight: the bike weighs in at 70 pounds. However, he reports that improving technology has solved the weight issue: newer models weigh in at as little as 35 pounds.

Helping to conserve the battery are my bike’s seven-speed gears, which operate like a regular bike with a handlebar-mounted shifter.

The Step-Thru frame (a design also used on other brands) makes it easy to mount and dismount the bike, especially when I have the panniers loaded with groceries. At the grocery store I can remove the key and lock the battery to prevent theft, but I still slap a chain around the frame. My e-bike is used more as an errand runner, but it can handle paved and off-road trail terrain.

And Riding the Trails

Trail riding is something Ryan Finger, co-owner of Let’s Roll electric bike shop in Lancaster, is hoping to capitalize on as he expands to a second location. In Downtown Lancaster, the narrow space Let’s Roll occupies at 23 East Walnut Street consists of two showrooms with dozens of bikes by brands such as Aventon, Himiway and Murf. The shop also includes an accessories room and a repair facility in the back.

“Lancaster did not have any electric-bike shops in the city, and we saw the demand growing,” says Ryan, whose store opened in May 2022. He and co-owner, Tim Hill, plan to open a satellite location in Columbia’s Riverview Terrace in 2023. The location will put Let’s Roll right next to the 14-mile Northwest Lancaster County River Trail, which is popular with all manner of cyclists. “We expect to do a lot more rentals in Columbia,” says Ryan.

E-bike trail riding is regulated on local, state and federal levels, which brings us to the legal portion of this primer. Act 154 (2014) defines “pedalcycles” as vehicles propelled solely by human-powered pedals or …
with electric assist. These bikes are required to weigh less than 100 pounds and employ an electric motor system rated at 750 watts or less. The e-bike cannot reach a speed greater than 20 miles per hour on a level surface when powered solely by the motor – in other words, at full throttle. Unlike motor vehicles, i.e., cars and motorcycles, e-bikes are not subject to registration, licensing or insurance requirements. And, here’s the biggie kids, “no person under 16 years of age shall operate a pedalcycle with electric assist.”

Mike Farrington, owner of Green Mountain Cyclery in Ephrata, has been handling e-bikes before Act 154 was amended to include them. He started converting bikes to electric for just a handful of customers 10 years ago. “The early stuff was really simple. It was hub motors with big, clunky batteries. The types of e-bikes you see now have exploded in popularity over the last three years,” Mike explains, crediting battery technology for helping to increase e-bike adoption. 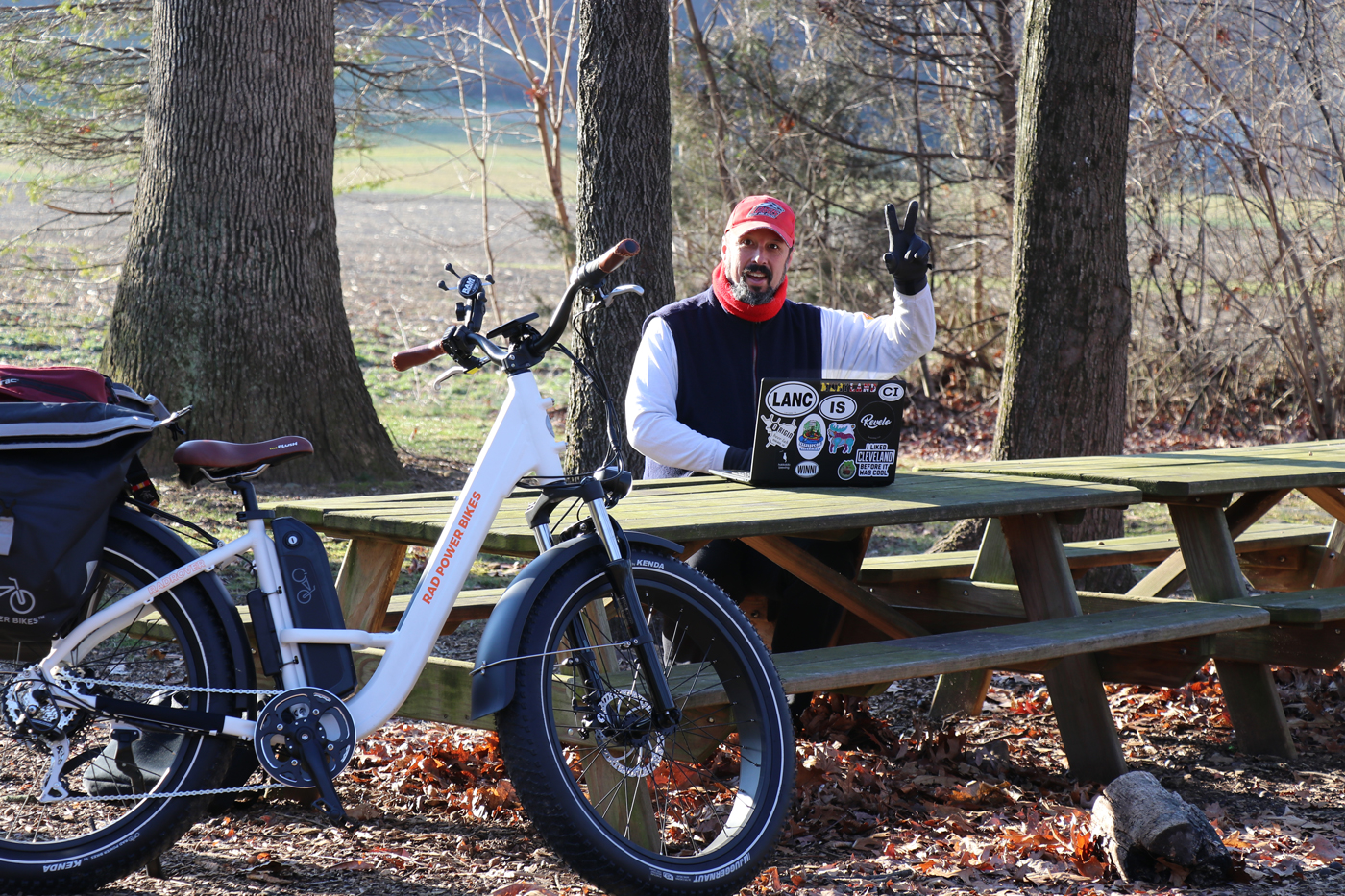 E-bikes newer than mine feature longer-lasting, lighter and smaller batteries. As battery technology advances in general, e-bike makers will adopt and incorporate the new tech. Green Mountain carries a number of top brands, including Cannondale, GT and Trek. One of Trek’s newest bikes weighs only 35 pounds, says Mike, which is half the weight of my ride! A lot of the weight loss can be credited to battery technology. “Everything is getting sleek and streamlined,” says Mike. “Motor technology is advancing, but batteries are where the greatest advancements are at.”

Everyone Can Now Ride

An often-unknown advantage to an e-bike is the power of ability. “E-bikes change the perception of what people think they can do – longer rides, riding more frequently,” says Let’s Roll’s Ryan Finger. Although working from two different parts of the county, the shop owners sound the same. Green Mountain’s Mike Farrington says, “Of the biggest things e-bikes have allowed people to do is to ride again when they thought they may never be able to.”

Ryan and Mike take care to offer brands they can stand behind. One warning both local experts like to share about e-bikes is, “You get what you pay for.” As e-bikes have become more popular, cheaper brands – which often equate to inferior products – have hit the market, especially through online retailers. According to industry experts, e-bike sales are estimated to reach 40 million units worldwide, generating about $20 billion in revenue in 2023.

This year, try one out for yourself. Each shop offers test rides. You might love it!

When gas prices were sky high, Michael Upton elected to park his car and rely on his e-bike for running errands in and around New Holland. Now, using the bike to visit the grocery store, post office, a coffee shop or a farmstand is just second nature.