The Black Forest Brewery has become part of the fabric of Ephrata. Located along West Main Street, it’s owned by Bob and Denise Harter, who also operate the 1777 Americana Inn Bed & Breakfast. 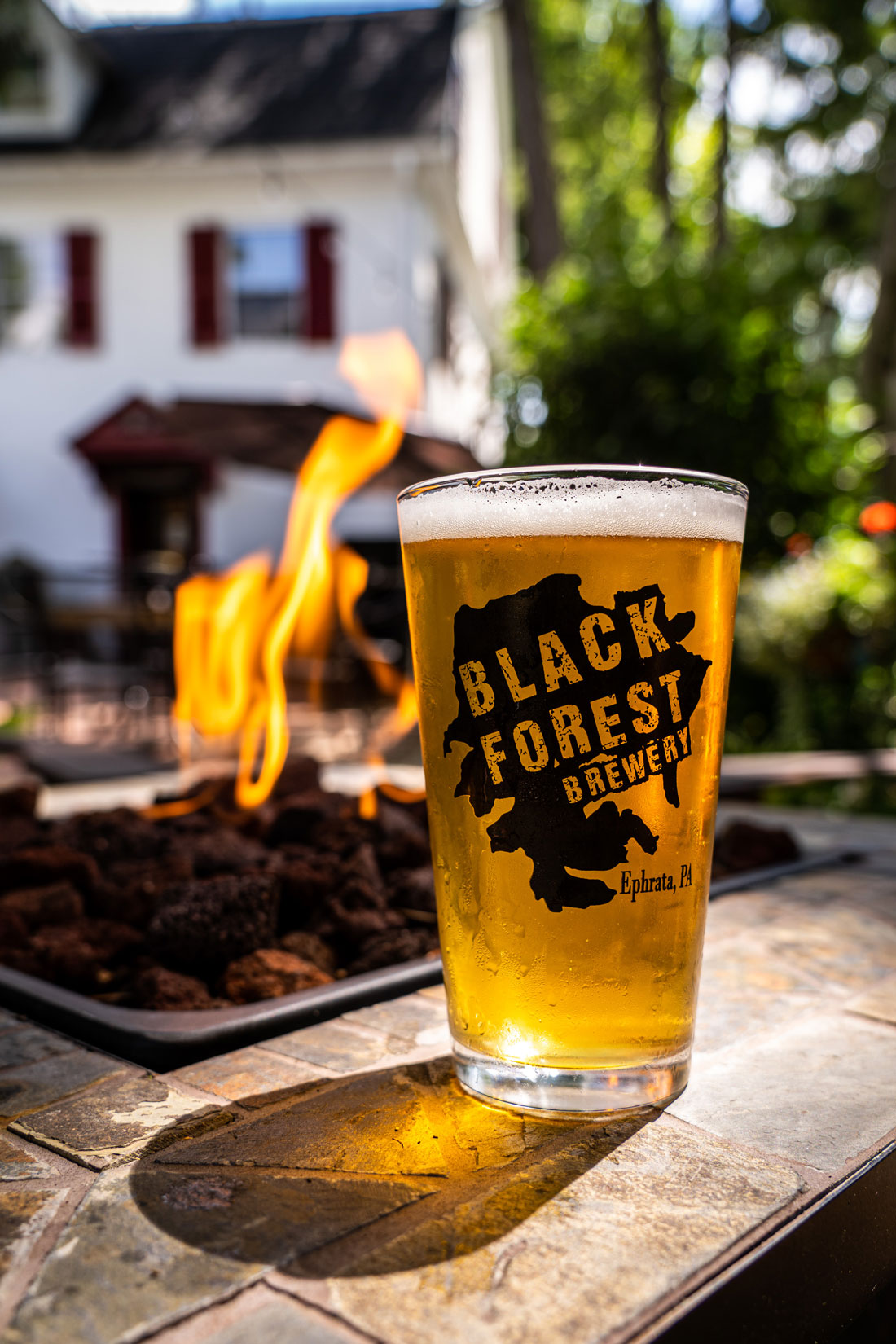 Black Forest Brewery quickly adhered to the takeout and outdoor dining-only phases of reopening earlier this summer. Fortunately, because they share a beautifully landscaped property with the 1777 Americana Bed & Breakfast, there was plenty of space for social distancing.

The idea for a craft brewery was conceived when Bob and his sons, Ryan, Ross and Reese, would go backpacking on the Black Forest Trail in Tiadaghton State Forest. Beer was a favorite topic of discussion among the foursome. Aided by a homebrew kit, Bob and Ryan ultimately began crafting beer in the Harters’ Berks County kitchen.

Meanwhile, Denise was contemplating her next move after she retired from teaching. Bob, who was a project manager for a financial firm, was also ready for a change. They envisioned buying a property through which Denise could operate a bed & breakfast and Bob could open a brewery. 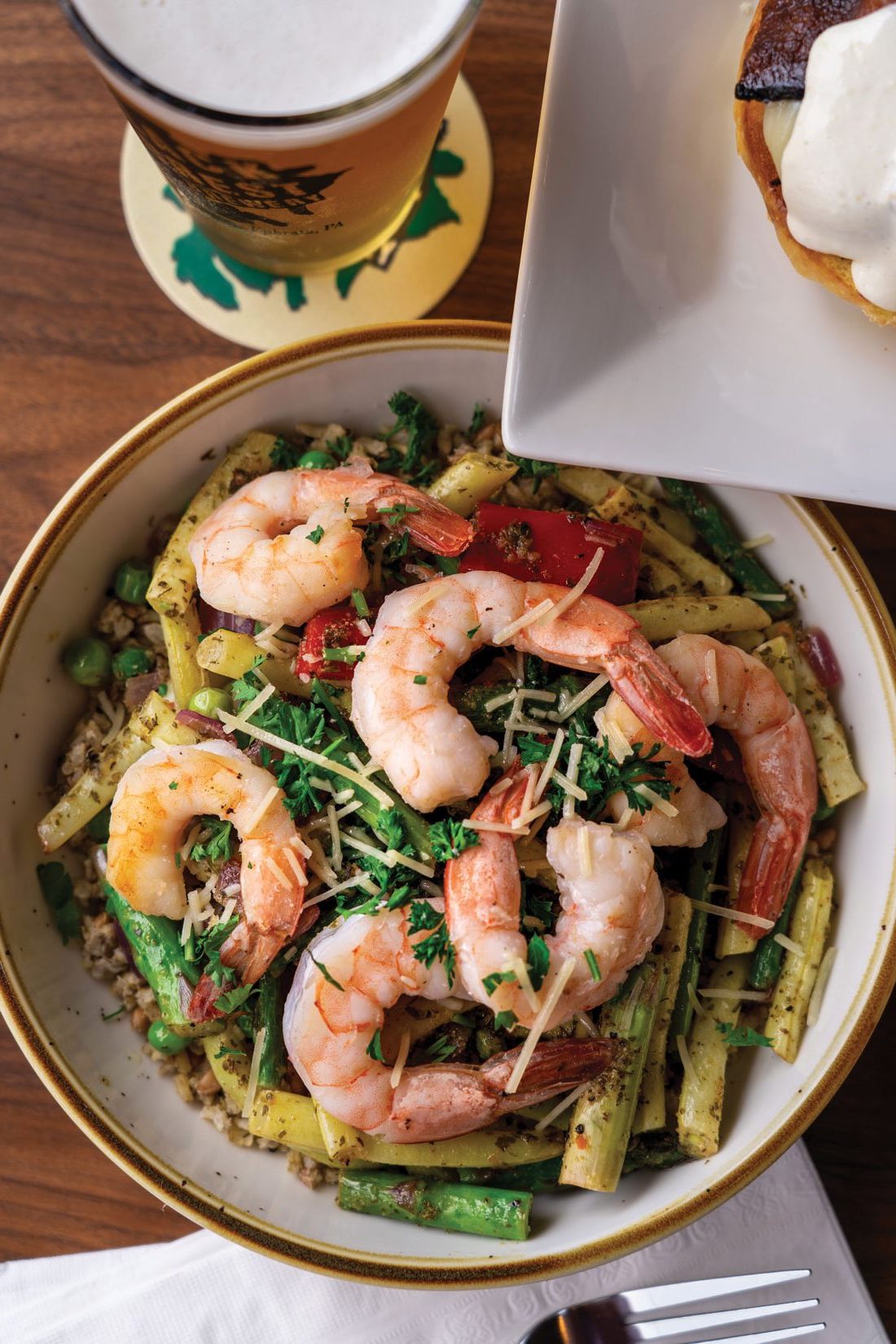 On the menu: Grilled Vegetable Grain Bowl with an option of adding shrimp, steak tips, pork belly or chicken.

Their plans came to fruition in 2014, when the Harters took over a historical property in Ephrata – built in 1777, it was originally owned by tall-case clockmaker Jacob Gorgas – that had been part of the Doneckers community.

Although Black Forest Brewery is housed in a building that was constructed after the Harters purchased the property, its architecture complements the inn. An expansion was completed in March. High ceilings provide the interior of the brewpub with a lofty feel; retractable patio doors deliver an indoor/outdoor connection. The décor features such reclaimed materials as pressed tin on the front of the brewpub’s two bars and “window frames” on the walls. There’s even a large slate chalkboard from Ephrata’s Highland Elementary School. “Everything has a bit of history and a story,” Denise says. That includes the heads of Black Forest’s 10 taps that were crafted by the couple’s son, Reese, who operates Make It Grain, a fine carpentry business. 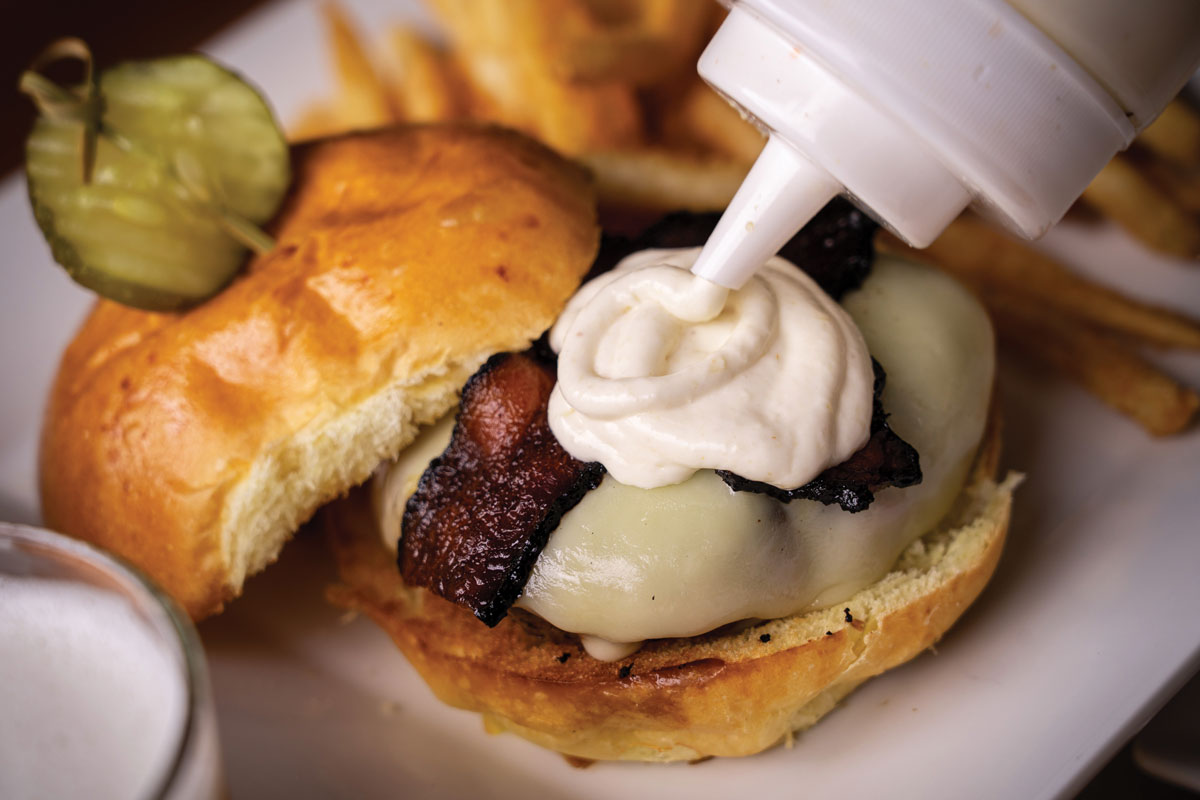 Burgers have become a signature of Black Forest’s menu.

Black Forest has ample indoor and outdoor seating for you to enjoy, including a beautifully landscaped garden patio that Denise says has been popular with guests who range from B&B patrons and local residents to bike riders from the nearby rail trail and visitors to the area. “Our slogan is ‘drink local, walk home,’” says manager Eric Sears, who points out that Black Forest Brewery is only one of two breweries in the state that has a B&B attached to it.

Black Forest’s name and logo pay homage to the place where the idea for the business was conceived. “We often get questions about the logo. It’s the shape of the 42-mile loop Black Forest Trail,” Bob explains. The name also has an Ephrata connection – the town’s founder, Conrad Beissel, was born and raised in the Black Forest region of Germany. Additionally, Black Forest’s brews are crafted in accordance to the German Beer Purity Law, or the Reinheitsgebot, which limits the ingredients used to brew beer to water, hops, grain and yeast. 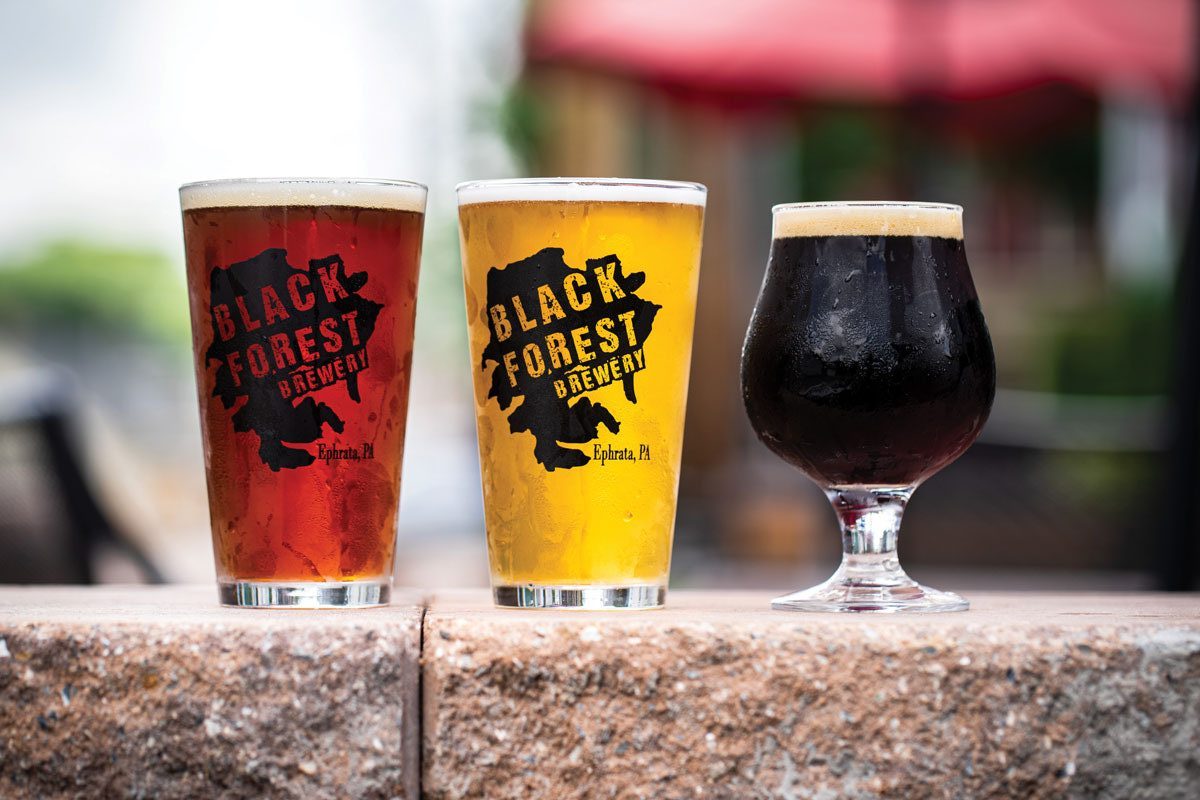 Black Forest’s logo was inspired by one of Bob Harter and his sons’ favorite hiking trails in Tiadaghton State Forest. Beer is made according to the German Beer Purity Law that limits ingredients to water, hops, grain and yeast.

Bob is Black Forest’s brewmaster. Flagship brews include Conrad Kolsch, 42nd Mile IPA and Americana Pale Ale. “We have a gamut of selections from Kolsch to IPA, stout and porter. We’ll also do some different styles of beer based on seasonality; saison is great for the summer,” he notes. Black Forest has about 110 members in its mug club; their numbered mugs hang by the taps. Craft cocktails, cider from Levengood’s and wine selections from Allegro Winery are also available. 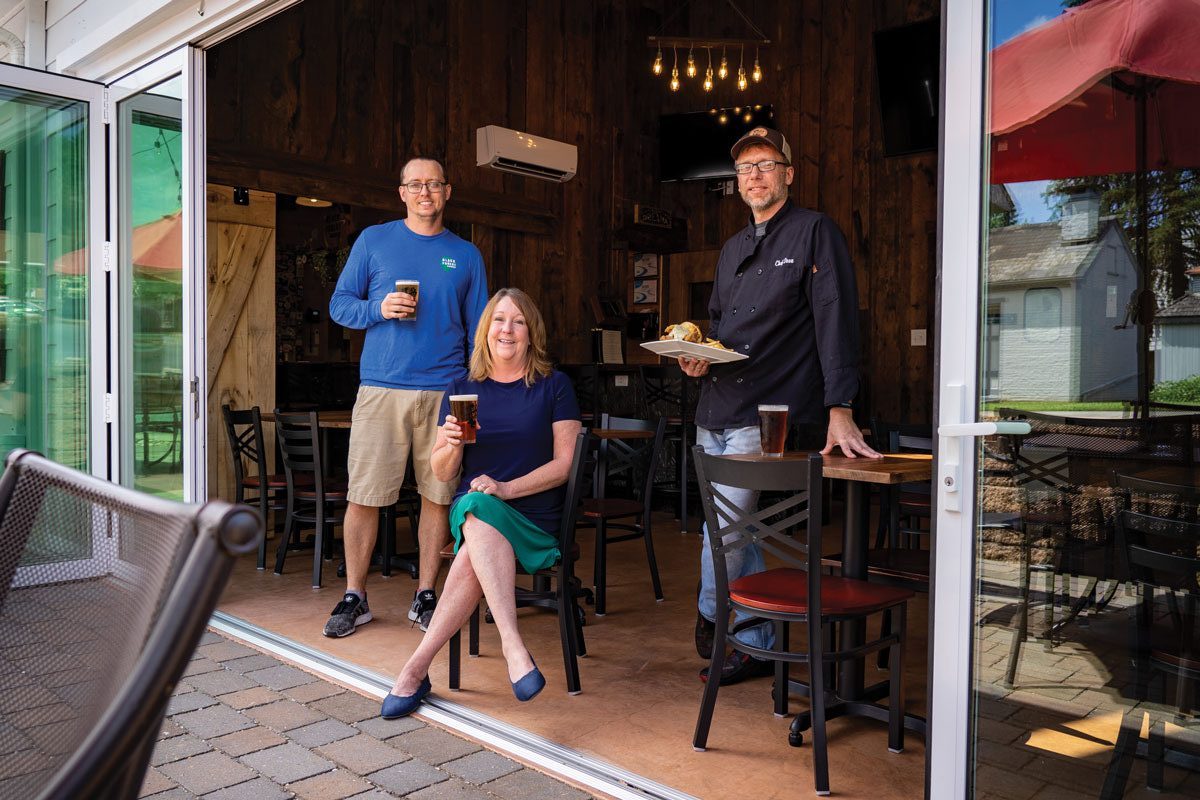 Eric says the brewpub has become known for its burgers as well as its fries – an appetizer features fries topped with house-made beer cheese, caramelized onions, salsa and bacon. “Our chef, Dave Parsons, is very talented with sauces,” says Denise. “The sauces he makes for our drumsticks [the Black Forest version of wings] are great – he’s won awards for the black cherry habanero sauce.”

Denise points out that the brewpub is involved in the community. One community effort entailed a partnership with two other Ephrata craft breweries – St. Boniface and Pour Man’s – to create a special brew, Ale for Trails, to raise funds for Ephrata’s Heatherwood Bike Park. 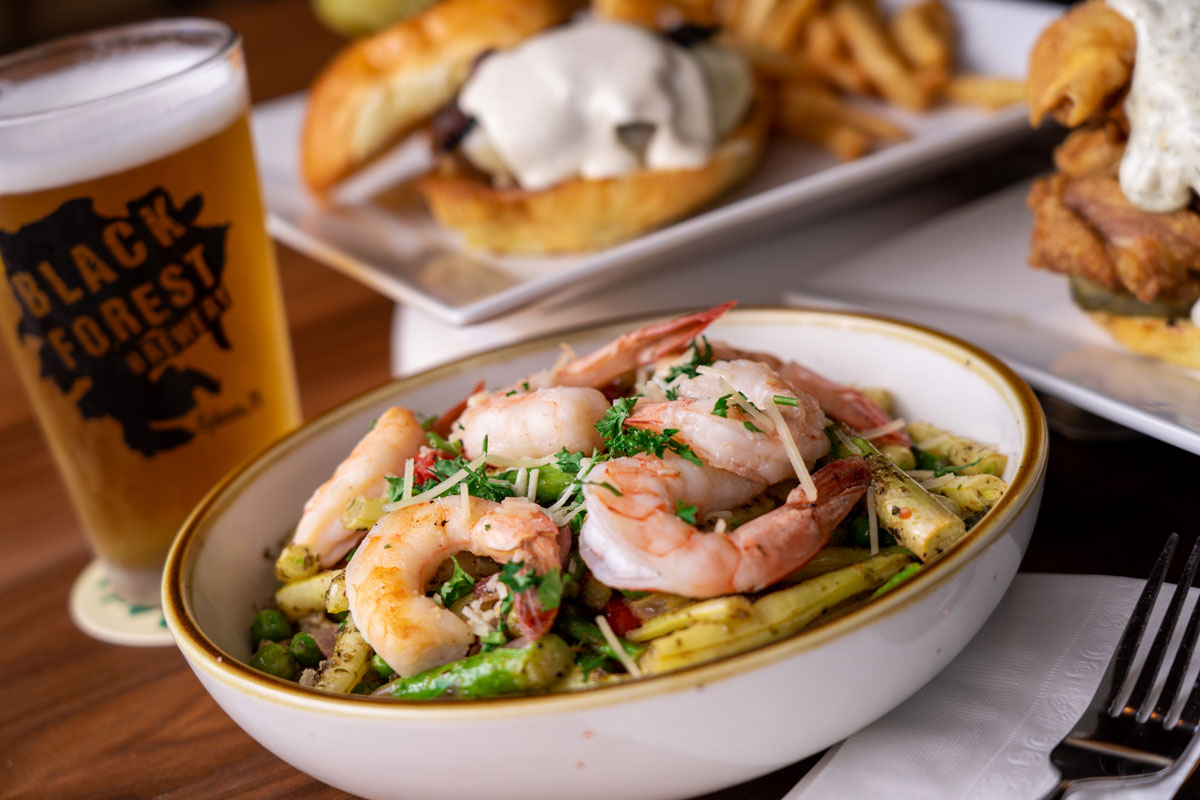