Megan jokes that where the weather is concerned, a black cloud seems to follow her. So, when the time arrived to choose her wedding date, she was not partial to any season. Sunshine, rain, snow, sleet, it didn’t matter. All she wanted was a reception at The Palace at Somerset in Central New Jersey.

Memorial Day weekend, 2011. A group of friends were planning a getaway to the Jersey Shore. They in turn invited other friends to join them. Lancaster’s Ryan Tiburtini was among the invitees, as was Megan Melvin, who hailed from Staten Island. The two instantly hit it off and were soon involved in a long-distance relationship. 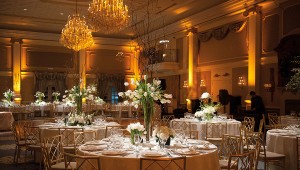 Megan’s dreams came true: All she wanted was to have her reception at The Palace at Somerset (New Jersey).

Ryan, who grew up in Lancaster, is employed by Clark Associates, where he is involved in business development. Megan is an optometrist. When she met Ryan, she was working for a private optometric practice in New Jersey. Even after their wedding, she continued commuting. “I had clothes everywhere,” she laughs. She now works for two optometry practices in the Lancaster area.
By late 2012, things had progressed to the seriously-in-love stage. In the course of a week, Ryan purchased Megan’s engagement ring, as well as a house. By March, he was ready to propose. “I wanted to do something nice, so I talked to my uncle,” he says, referring to floral designer Kerry Kegerise. Ryan shared his ideas and Kerry brought them to life with the most romantic of ingredients: candlelight, flowers and food. “I just took Ryan’s ideas and ran with them,” Kerry says.
This would be one of several special events Kerry would plan for Megan and Ryan. The second would be an engagement party that Kerry hosted at his home in Denver and the other would be their wedding. The engagement party was held in October 2013 and served to introduce Megan’s family to PA Dutch cooking (friends and family made their specialties). Kerry decorated the property with 133 pumpkins and planned to serve dinner in the backyard. “We had monsoon rains earlier that week,” he recalls, but reports that the weather did improve, allowing the party to be held outdoors. 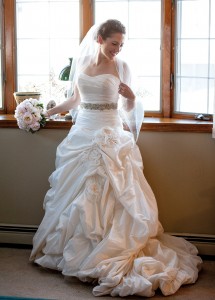 A plan was devised whereby Ryan would bring Megan to Kerry’s home under the guise that the three of them would go to dinner and discuss finishes for the couple’s new house.
Upon arriving, Megan walked through the front door and expected to be greeted by Kerry’s dogs. Looking toward the floor, she instead noticed candles. “I thought, ‘This isn’t safe. The dogs could knock one over and start a fire.’” Her New York City firefighter-father trained Megan well!
The dogs never appeared. The human and canine residents had vacated the house for the weekend and were heading for the beach.
When Megan finally raised her eyes, she was greeted by dozens of candles that created a pathway to the living room. Ryan, who says he went over the plan in his head “100-plus times,” ushered Megan into the candle-filled room, where “their song” was playing. Ryan then proposed and presented Megan with the ring. Of course, she said yes!
Next, Ryan escorted Megan into the candlelit solarium, where Kerry’s assistant, Ron, was on hand to serve them dinner, the menu for which included their favorite Mexican dishes. “We went to a Mexican restaurant on our first date,” Ryan explains of the gesture. The next morning, Ron served them a catered breakfast.

Megan dreamed of being married at her church in Staten Island and then holding the reception at The Palace at Somerset, an event venue in Central New Jersey. Ryan and Megan made an appointment with The Palace and were dumbfounded to learn that the venue was all but booked for 2014. The weekend between Christmas (2013) and New Year’s was available, as was Friday, January 3, plus a date in March. “I wanted a winter-wedding theme, so January 3 was perfect,” says Megan. “Since we would be inside, I didn’t give the weather much thought.”

After sharing their plans with Kerry, he made a surprise announcement. Flowers for the wedding would be a gift from him and Ryan’s parents, Tammy and Douglas Peifer. Kerry ultimately became the wedding planner, as well.
White became the floral theme for the wedding. Roses, tulips, hydrangea and calla lilies (among others) would be used to establish the theme in floral arrangements and bouquets. The only exception was the bouquets for Megan and her sister: blush-pink peonies were used to set those apart from the others. Kerry’s goal was to create a different design for each of the dining tables around which the 180 guests would be seated.
A “New York-style wedding” was also a component of Megan’s vision. She explains that such weddings revolve around dining and dancing: each dinner course is interspersed with dancing, thus providing a non-stop party atmosphere.
As for attire, Megan’s ruched and embellished ballroom-style gown was purchased from a shop in New Jersey. Ryan and his groomsmen wore classic black tuxedos. Megan originally envisioned black dresses for her attendants, but later decided to go with a stormy-grey hue that would contrast with yet complement the black tuxedos. 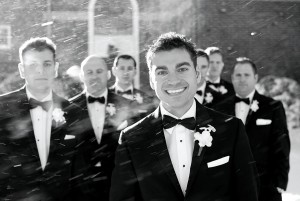 The snowy day made for memorable photos.

Weddings held over the holidays can present their share of challenges. Flowers are a case in point. Because of the way Christmas/New Year’s fell in 2013, the flower markets in Europe were essentially closed for more than a week. That meant Kerry had to schedule his deliveries prior to Christmas. “Everything arrived Christmas Eve,” he explains. In order to keep them fresh for the post-New Year’s wedding, the flowers had to be frequently cut. To Kerry’s dismay, the French and Dutch tulips that arrived were yellow in color and had to be replaced. Fortunately, a crisis was averted when the replacements arrived via special delivery early in the week of the wedding.
The weather forecast for the weekend was unsettling. Original forecasts called for a blizzard. “It even had a name: Hercules,” Megan notes. Thankfully, as the week progressed, the severity of the storm was dialed back. Still, falling temperatures were a concern. Kerry planned to store the flowers in a box truck overnight, but with temperatures forecasted to plummet below zero, alternate plans were needed. Fortunately, the hotel where Kerry and members of the bridal party were staying made a banquet room available. “If the flowers had stayed on that truck, they would have turned black,” Kerry explains. “Even exposing them to those temperatures for the short time it took to get them into the hotel could have been disastrous!” Kerry was so concerned about the flowers that he didn’t sleep that night. “I checked on them every hour,” he recalls.
The bouquets were transported to the home of Megan’s parents. “I had asked for the tightest blooms possible,” Kerry says of the delicate peonies. “So that they wouldn’t open, they needed to be misted throughout the night and Megan’s father volunteered to do that.”
Snow began to fall Thursday evening and continued throughout the day on Friday. “I just didn’t let it bother me,” Megan says. “Somehow, I managed to stay calm. I was getting married no matter what!”
The challenges snowballed into Friday. “We were supposed to get into The Palace at 7 a.m.,” Kerry relates. “I received a text that moved the time to 10:30. I had to be at the church by 1:30!” (Little decorating was needed there, as the church’s Christmas decorations were slated to remain in place until January 6, when The Epiphany is celebrated.) The hair salon could not open on time, either. “They opened an hour late just for us,” Megan reports.
Despite the postponements, everyone made it to the church on time, including Megan’s brother, who had a flat tire and was told it would be hours before help could arrive. “My sister-in-law, who was seven months pregnant, was on the phone with him in tears, fearing something would happen to him,” Megan says. Ultimately, he decided to drive the two miles on the flat tire. He arrived disheveled and smeared with grease but assured everyone all he would need is just a few minutes to shower and change into his tux. 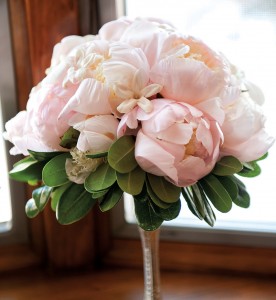 Despite the time crunch, Kerry had created an elegant winter wonderland in the ballroom at The Palace. Each table featured a different floral arrangement. “We pinpointed the tables with white halogens,” he says, noting that the rest of the room was bathed in amber lighting. Upon seeing the room for the first time, Megan uses the word “breathtaking” to define her and Ryan’s reactions.
Ryan shares that when he informed The Palace that family would be handling the floral aspect of the event, the announcement received a chilly reception. However, when personnel saw the results, Kerry was offered a job!
The night went by in a flash. Ryan’s lasting memory will be of “everyone happy and smiling.” Megan will always remember the dance floor that “stayed packed all night.” And, they will long treasure the pictures that were captured in the photo booth. “We have copies of all the photos,” Megan notes.
Most of all, they’ll remember the snow. “It made for pretty pictures and good stories,” Megan observes.

The weather wasn’t quite finished with our newlyweds. Several days after the wedding, they arrived at the airport to catch their flight to Antigua, only to
encounter chaos. Another storm was approaching! “Cancelled” dominated the departure board. Theirs would be one of the last flights to make it out.
Megan decided to play the honeymoon card and begged personnel to get them on the plane. It worked! Ryan and Megan arrived in Antigua, where they were greeted by sunny skies and warm temperatures. “Unfortunately our luggage didn’t make it, but we didn’t care!” says Megan. “It was the best vacation ever!” 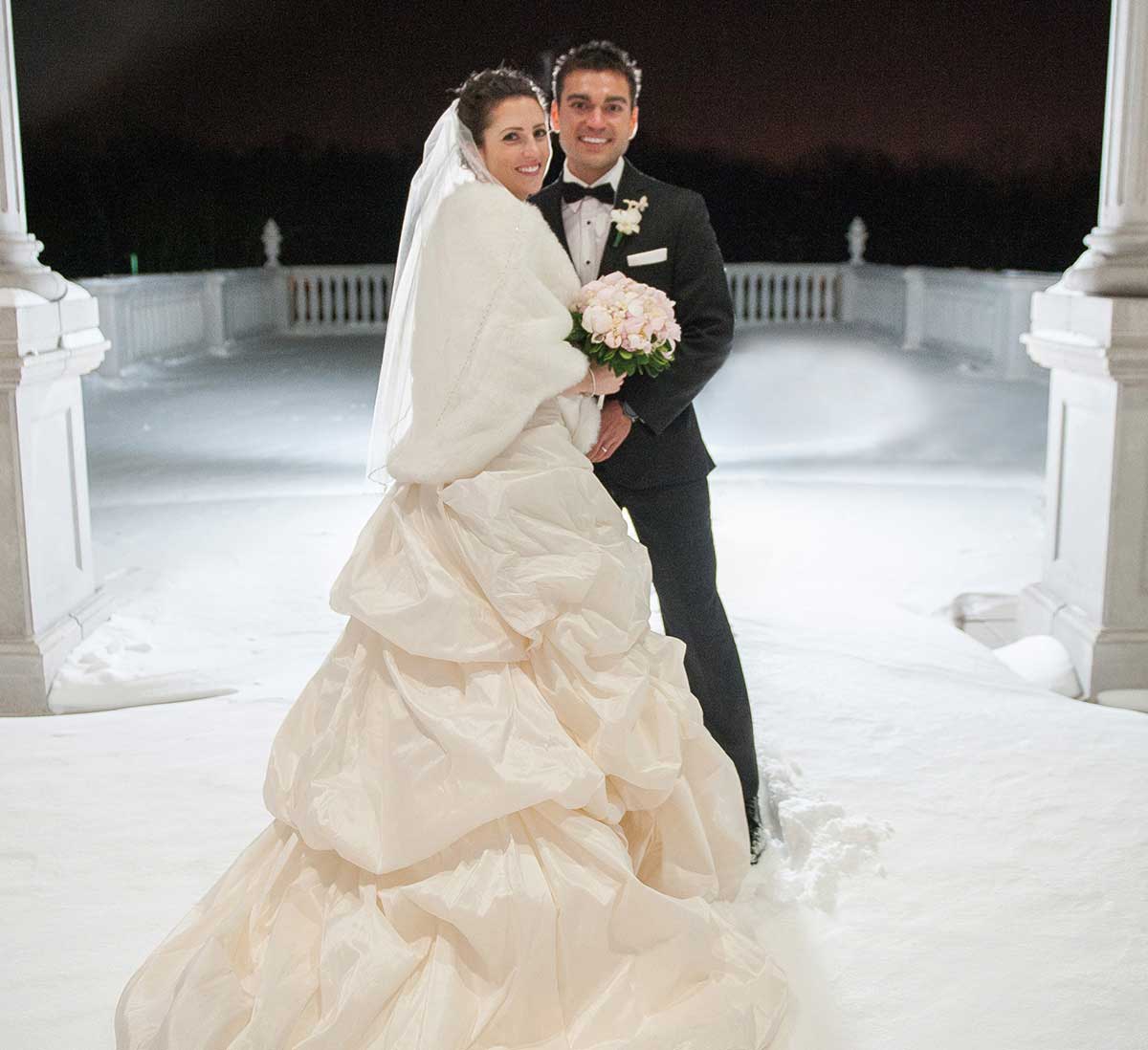 A snow-filled terrace provided a pretty backdrop for this portrait of Megan and Ryan.