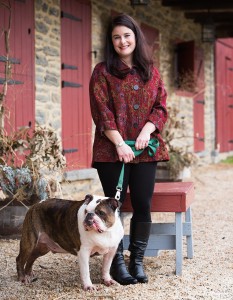 Samantha’s woven jacket is from Festoon.

In 2010, samantha was training to become a federal air marshal. During her physical, her EKG registered an abnormality. A subsequent visit to a urologist prompted the doctor to say he detected a heart murmur. None of it made sense. Samantha exercised on an almost daily basis. Heart disease did not run in her family.

The news continued to worsen. A small hole was discovered in one of Samantha’s valves. Then, the news became dire. Several more holes had developed and the original had grown larger. Samantha was scheduled to undergo open-heart surgery at the University of Pennsylvania, where a mechanical valve would be inserted. “The mention of open-heart surgery came as a complete shock,” she says.

Post-surgery, Samantha got back to her life. Realizing the air-marshal program was no longer viable, the former adult-probation officer – she hails from a family dedicated to law enforcement – decided to put her master’s degree in education to use and became a therapist.

She also met her fiancé, Jerry Fulton, through mutual friends. When it became obvious they both wanted more than a long-distance relationship, the Pittsburgh native moved to Lancaster. He’s now a manager at Stauffers of Kissel Hill’s Lititz location. But, before Samantha could make a commitment to Jerry, he had to gain the trust of another family member: Guinness, Samantha’s beloved bulldog, who is now six years old.

Pre-Guinness, Samantha had no intention of getting a dog. Her sister, Theresa Stauffer, happened to be Guinness’ unofficial foster mom. “She asked if she could bring the dog to my house so that I could just meet him,” Samantha recalls. It’s hard not to fall in love with a four-month-old bulldog. “Just look at that face,” Samantha says, as she shows off Guinness’ “baby” pictures.

You can’t argue with that. Guinness was adorable. According to Samantha, she had her hands full. Guinness was a bad puppy and was always creating havoc. And, he has his issues. “He’s sensitive to grass, so I have to rub him down with medicated creams. And, he has food issues, too. And, he scratched his cornea …” recounts Samantha. “No one else could love him as much as I do.” You might say that Guinness tolerates Jerry’s presence in their lives. “It took a while for him to warm up to Jerry,” Samantha admits.

The couple thought that another dog might provide Guinness with companionship. They learned of a litter in need of homes near Williamsport. Gabby’s adoption probably qualifies as a rescue. “The house was out in the sticks. The puppies were kept in a cage outside and it was cold. They were shivering,” Samantha remembers. Gabby, who is a boxer and lab mix (and maybe a little dalmation, too) joined the family almost two years ago. Her only issue is separation anxiety, and they are working through that. Gabby is also rambunctious, but Samantha has found an outlet for that through taking her on runs. “Gabby has become Samantha’s dog,” Jerry reports.

Samantha says she’ll always be indebted to Guinness. “He’s gotten me through the worst things in life,” she professes. You see, heart disease wasn’t quite finished with Samantha. Eight months post-surgery, she was easing back into her exercise routine and was at the Lititz Rec one afternoon when an odd feeling came over her. “I was a mile into my two-mile run on the treadmill and I thought to myself, ‘Something isn’t right.’ I was so tired. All I wanted to do was go home and sleep.” She called Jerry, who was on the road. He in turn called Theresa’s husband and asked him to check on Samantha. Theresa learned of the matter and insisted that Samantha go to the ER. Paramedics from Warwick EMS and the Lititz Borough Police rushed to her aid.

A physician on duty in the hospital’s ER diagnosed her condition as a massive heart attack due to a fully blocked artery. Emergency surgery revealed white blood platelets were the culprit. “The replacement valve was functioning properly and my blood thinner was doing its job,“ Samantha notes. “A heart attack is the last thing you think about,” she says. “You tend to think of everything else.” She spent a week in the ICU and had to wear a life vest with a built-in defibulator. A three-month stint in a cardiac-rehab program followed.

Samantha says life is now good. She and Jerry are steadily making home improvements at their house in Lititz. They enjoy their dogs. She is steadily coming off the meds she was required to take. And, a wedding is being planned for September. Still, no one can explain why a 30-year-old woman became a victim of heart disease. “The stars aligned,” Jerry philosophizes.

Samantha is of the opinion that “everything happens for a reason” and theorizes that had she become an air marshal, “I probably wouldn’t have met Jerry or gotten Gabby. I’ve learned to relax. Before, my life was centered around work and taking classes. Now, I love spending time with my family, especially my sisters.” She’s also become involved with the American Heart Association and takes pride in having participated in the Heart Walk for the past two years. “Why me?” is not in her vocabulary. Instead, she prefers to concentrate on the “many positive things that have happened.”

♥ Chest Discomfort – most heart attacks involve some discomfort in the center of the chest that lasts more than a few minutes, or comes and goes. The sensations are described as uncomfortable pressure, squeezing, fullness and pain.

♥ Upper Body Discomfort – symptoms (mild discomfort to pain) may exhibit themselves in such areas as the arms, the back, the neck, the jaw or the stomach.

♥ Shortness of Breath – this sensation could occur with or without chest discomfort.

♥ Other Indications – breaking into a cold sweat, experiencing nausea or becoming lightheaded are also signs of a heart attack.Women have also reported feeling unually tired prior to their heart attacks.