September is a banner month for Rooster Street Butcher. Owners Tony and Kristina Page are celebrating Rooster Street’s second anniversary in Lititz, four years as a stand holder at Lancaster Central Market and five years as a butcher shop.

The venture began in Elizabethtown, which Tony notes was mostly a production facility with a small retail store. “We wanted to expand our offerings. We now have more production space and about 24 feet of display cases for our charcuterie, as well as an area for a small cafe,” he says of the move to Lititz. Rooster Street makes its home in a former retail store, which entailed renovations before the business could open. “What really drew us to this particular spot was the glass partition,” Tony notes.

Located behind the display cases, the glass partition offers a view of the production area. White subway tile distinguishes some of the walls. Tall windows bathe the cozy dining area with natural light. The BYOB café seats 28 at wood tables of varying sizes. The larger tables sport marble tops. “We wanted to create a crisp, clean look and a casual, comfortable restaurant,” says Kristina.

A graduate of Yorktowne Business Institute and School of Culinary Arts, Tony’s culinary career began at age 16 when he started washing dishes and cooking at an uncle’s restaurant in York. There he discovered a passion for cooking. He’s worked in restaurants in Lancaster, Philadelphia, New York City and Charleston. Prior to opening Rooster Street, he worked at Emeril Lagasse’s Chop House (The Sands Casino Resort in Bethlehem), starting as the sous chef and then being promoted to chef de cuisine. “That’s where I learned to cut and cure meat,” he says.

Growing up on a farm in Washington Boro, Kristina was a server at a small family restaurant at age 15. She holds a BFA in communication design from Kutztown University. After college she spent time in Savannah, Georgia, working in the restaurant industry. She returned to Lancaster and met Tony while the two were working at a country club. She also attended culinary school. She says she obsesses about both food and design; it’s her goal to make certain that Rooster Street’s guests leave happy.

But, what about the name? “When we went to Paris, we found a butcher shop we liked. There were roosters in the window, so every time we talked about visiting that shop we mentioned the roosters. When we started our own business and talked about a name, Rooster Street seemed like the perfect name,” Tony says with a smile.

He explains that Rooster Street Butcher uses locally sourced ingredients. That begins with the farmers that Tony personally selects. In his estimation, building relationships is an important part of the food chain. The farmers’ animals are grass-fed and pasture-raised. The hormone- and antibiotic-free meats are butchered in-house by hand. Rooster Street’s butcher shop produces its own bacon, hams, sausage, salami, lunch meats, ground beef and cuts of meat (beef, pork, lamb) and poultry.

One of the most popular items in the butcher case is the fresh sausage. “It’s not your typical sausage,” Tony explains. “We do make Italian sausage, but most of what we do is a bit more exotic,” he says of flavors such as chorizo, roasted garlic and kale that have become standards.

Seasonal pork sausage flavors include heirloom tomato, citrus and basil, mushroom and leek, and spicy jalapeño. For those who enjoy other types of sausage, Rooster Street’s offerings often include lamb, chicken verde and turkey country.

Menu items are made with Rooster Street proteins and as many locally sourced ingredients as possible. “What we don’t make here, we try to source from other makers,” Kristina says.

The top-selling sandwich is The Rooster, which features spicy fried chicken, buttermilk dressing, shaved cabbage and sweet pickles on a Kaiser roll. There’s a traditional beef burger, as well as a bacon burger, which is a blend of ground pork and ground bacon topped with American cheese, mustard, sliced jalapeño and shaved lettuce.

On Tuesdays at Rooster Street, the special is tacos; each week’s variety is posted on social media sites. In addition to menu offerings, guests can also select an item from the case, and it will be prepared for them.

If you’re not going the BYOB route, drink selections include Menno Teas and bottled sodas from Appalachian Brewing Company. 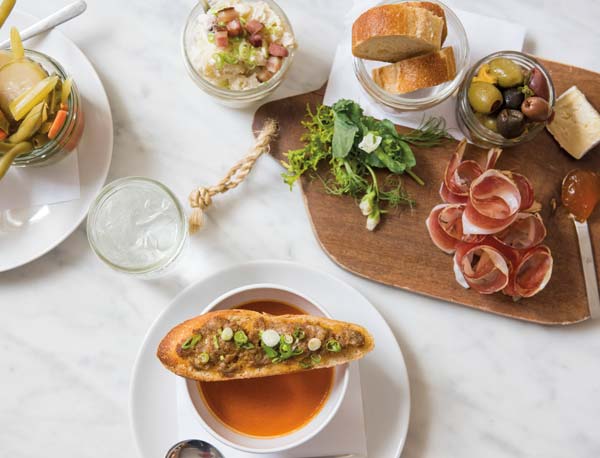