August 7 was a big day for the Lancaster Farmland Trust (LFT). That morning, the organization hosted a breakfast at ‘Til Hollow Farm in Narvon, the 533rd farm preserved by the organization. I attended the event in an effort to discover more about the stewardship of our community’s landscape and the agricultural resources it provides in often unexpected ways. 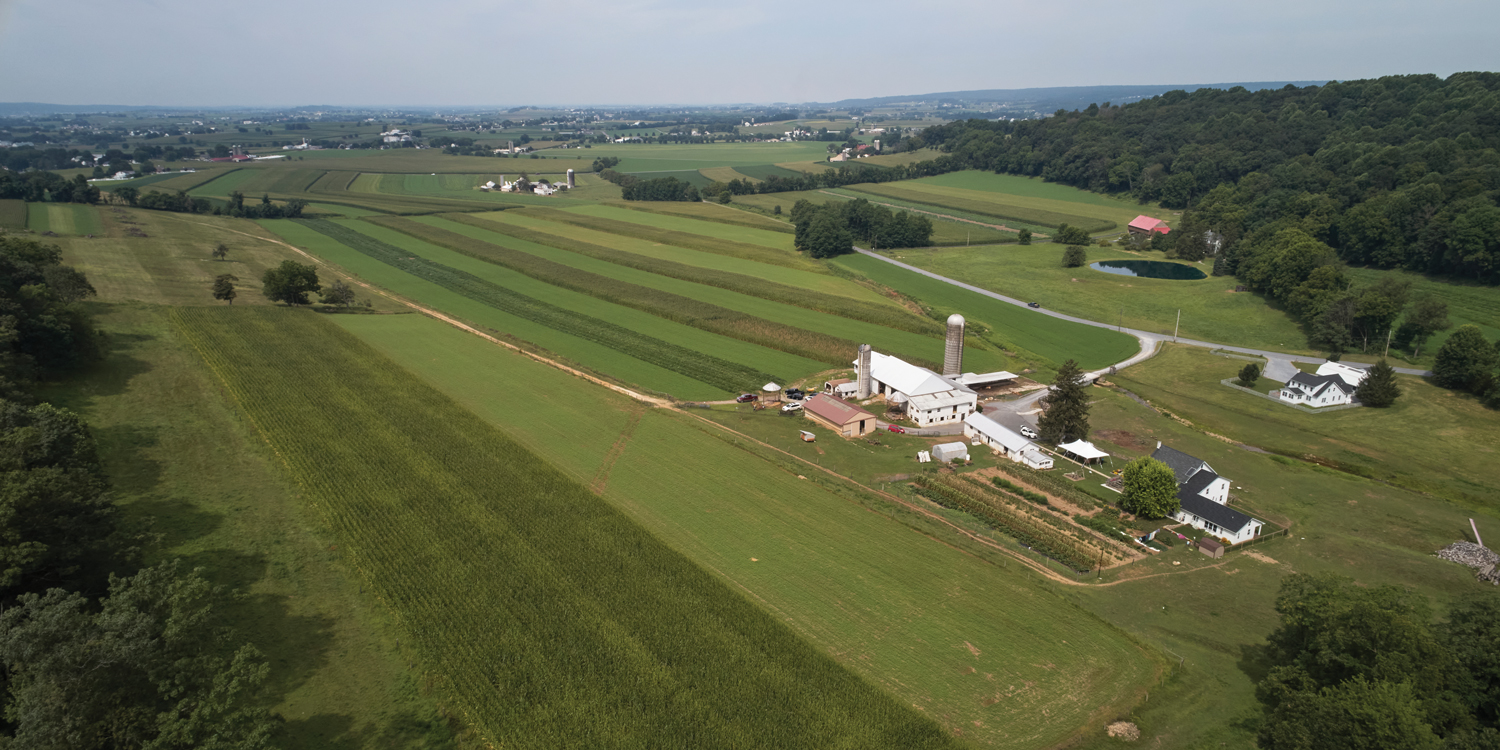 The roots of the Lancaster Farmland Trust extend back to 1980, when the Lancaster County Commissioners appointed a nine-member Agricultural Preserve Board whose mission was to preserve Lancaster County farmland. According to LFT’s website, as guidelines and policies were developed, it became obvious that the program was not effectively reaching Plain Sect farmers.

Amos Funk, whose family operated a farm market and garden center in Millersville and is known as Lancaster County’s “father of farmland preservation,” became the president of the newly created Agricultural Preserve Board. He in turn engaged with fellow preservationist, Marilyn Ware. Both were aware of the need for a private organization to help Plain Sect farmers preserve their land, which led to the formation of a new organization called Friends of Agricultural Land Preservation. The first meeting was held on November 13, 1985. Three years later, the organization was renamed Lancaster Farmland Trust. 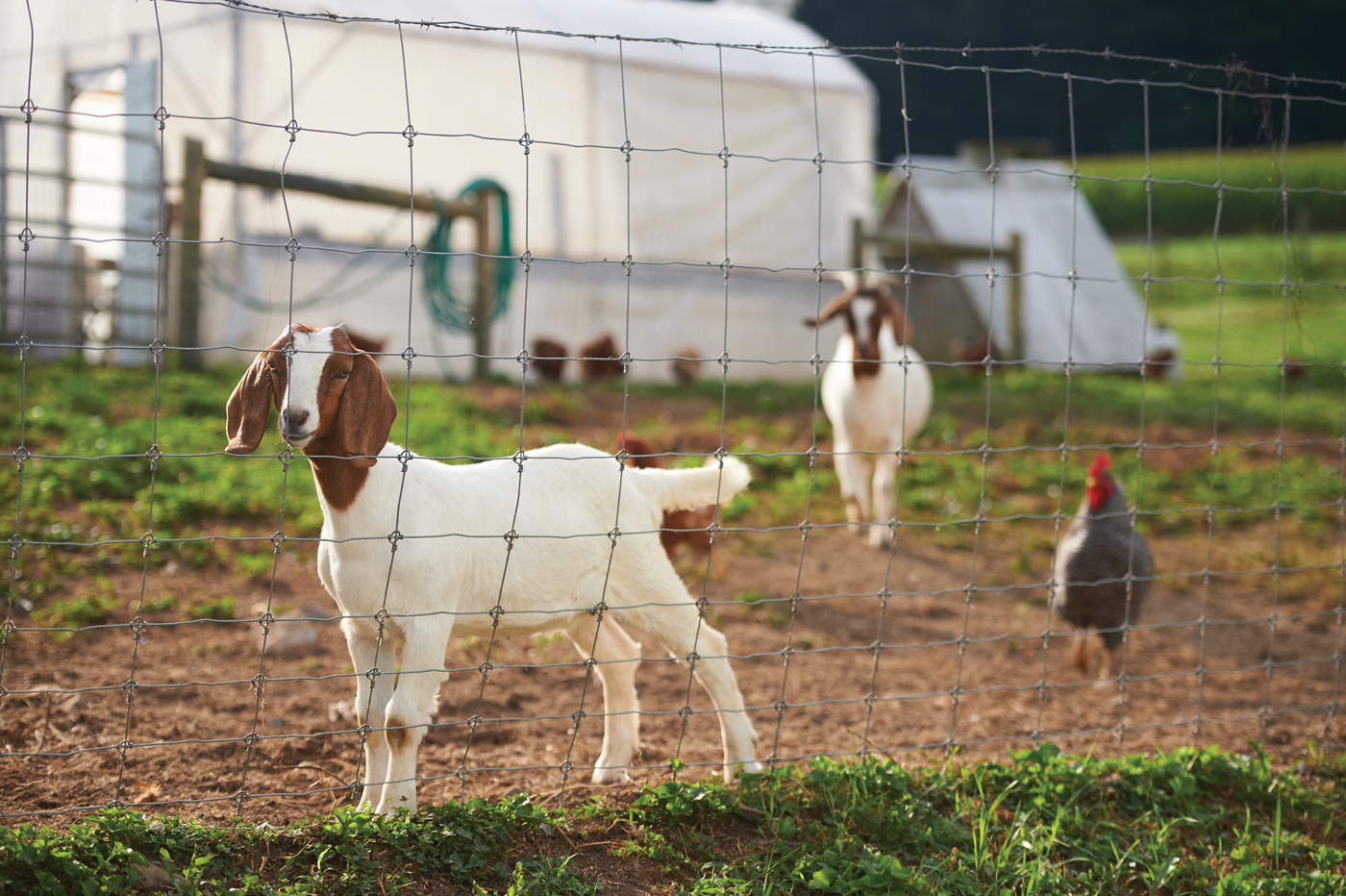 Livestock at ‘Til Hollow Farm, a former dairy that sustains itself by growing hay, corn and decorative fall produce.

Since then, LFT has developed into a dynamic and influential organization. Because of the efforts of LFT and the county’s Agricultural Preserve Board, Lancaster County has been able to preserve more than 115,000 acres of farmland. Such success has brought national recognition to LFT, which is now regarded as a leader in private farmland preservation.

“Access to fresh local food starts here,” says Jeff Swinehart, chief operating officer at LFT. “We’re the first link in the chain to a healthy food system and food security in our community.” The process of preserving farmland includes great due diligence, working with attorneys and appraisers. Essentially, the boundaries and value of land are appraised before development rights are extinguished by a conservation easement. Some landowners donate those rights to LFT, while others sell their rights to the organization, paying up to a certain percentage for those rights. 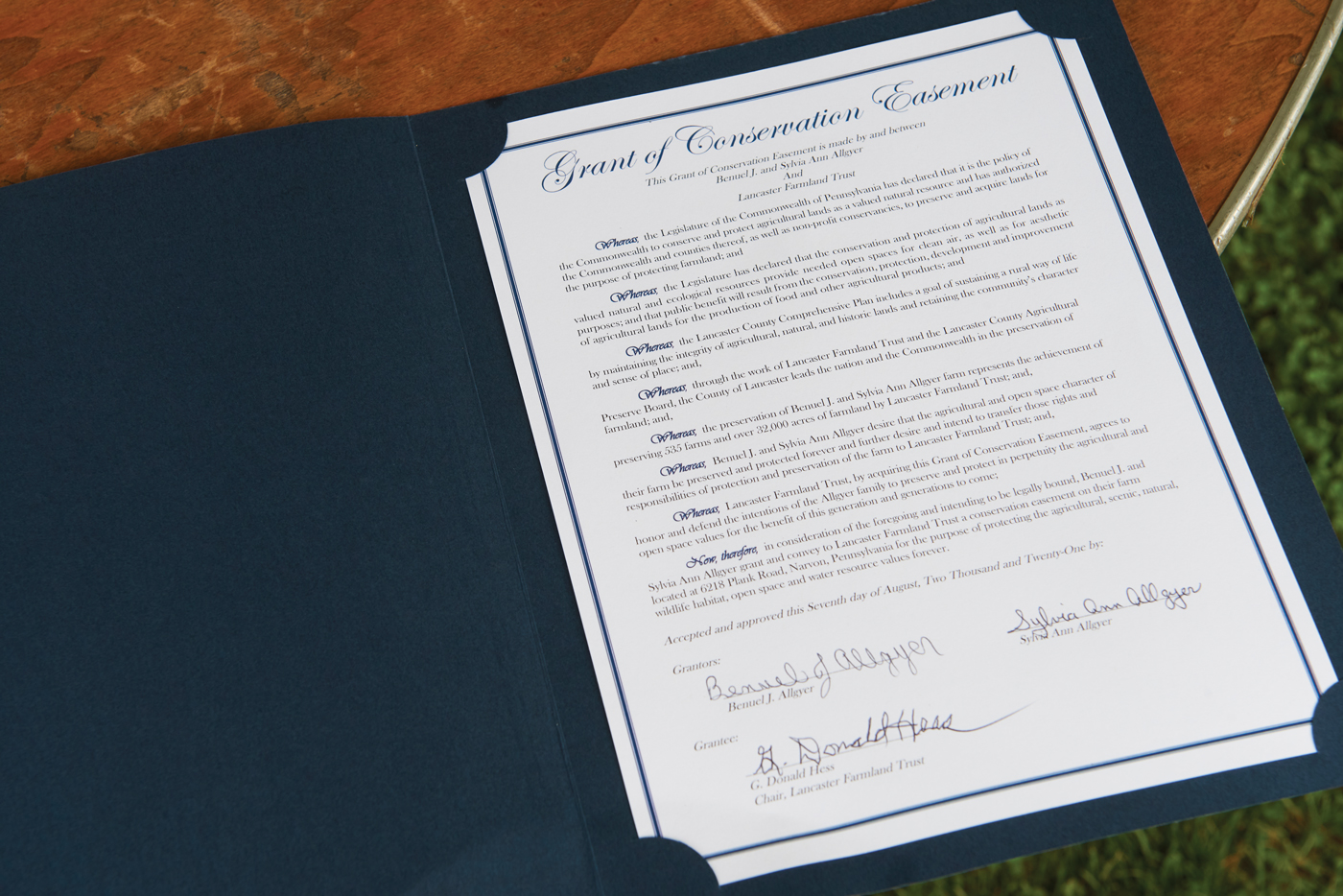 That donor-based investment typically helps to stimulate a farm’s sustainability while it makes the transition from one generation to the next. Preserved farmland may be sold or passed onto heirs at any time, but the easement continues with the land – forever. LFT is often involved in the sale of preserved farmland, ensuring the purchasing party understands what it means to own preserved farmland.

“Easements require that land has to be available for agricultural use in the future, making sure the farms are viable to grow food for people,” says Jeff. That means conservation work must be enacted to ensure the farm will be sustainable now and in the future. LFT works with any farm in Lancaster County on conservation efforts, whether their land is preserved or not. “How farms were designed 200 years ago are different than today,” Jeff notes. 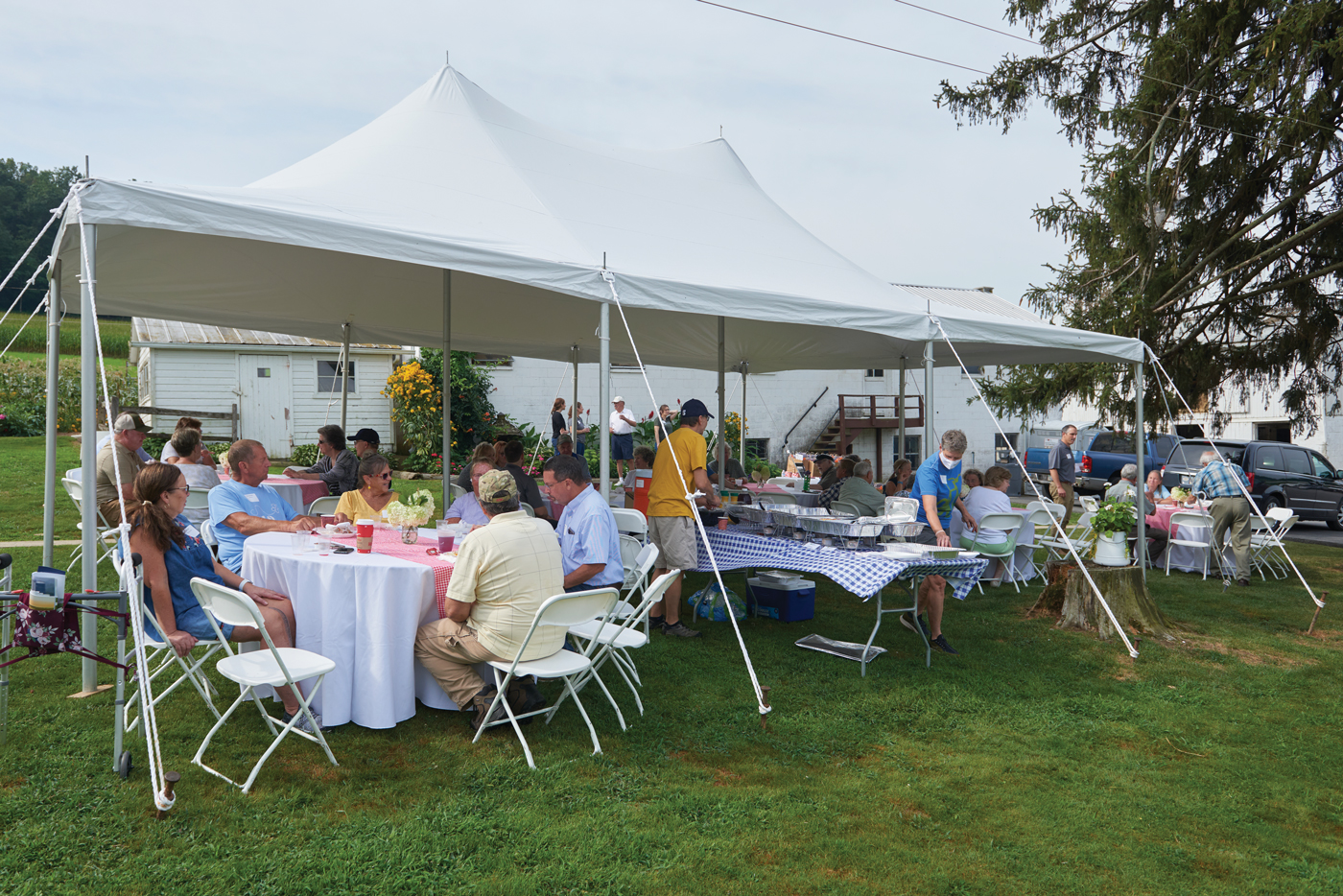 Lancaster Farmland Trust held a sell-out breakfast event at ‘Til Hollow Farm, hosted by the Allgyer family, who signed a conservation easement establishing their farm as LFT’s 533rd preserved farm.

Alongside farmers, LFT will work to develop and implement a conservation plan using practices such as crop rotation, contour farming, manure management and no-till farming so as not to disturb topsoil and decrease erosion. Another practice involves more than farms, but watershed areas, whereby fencing along streamlines is installed and grass waterways are created. “We’ve recently taken a stream approach, [starting with] the headwaters of the Pequea Creek in Salisbury Township and making our way to the Susquehanna,” Jeff reports.

The Allgyers were kind enough to invite those who support the work of LFT to their farm for the August 7 event. The family’s spokesperson, Benuel Allgyer, shared a bit of perspective on why they’ve made the decision to preserve their farmland and with it, its history. “God gets the honor,” said Benuel of the land he obviously loves. “My family moved here in 1957 and rented [the farm] for five years,” he explained, taking pride in the fact that its “roots” extend back to the 18th century. “Around 1748, John Plank landed in Philadelphia and was told there was prime land here,” Benuel recounted. “He decided – with the Lord’s leading – to walk here from Philadelphia.”

Plank ultimately purchased 400 acres from William Penn. The land remained in the care of the Plank family for just over 200 years. 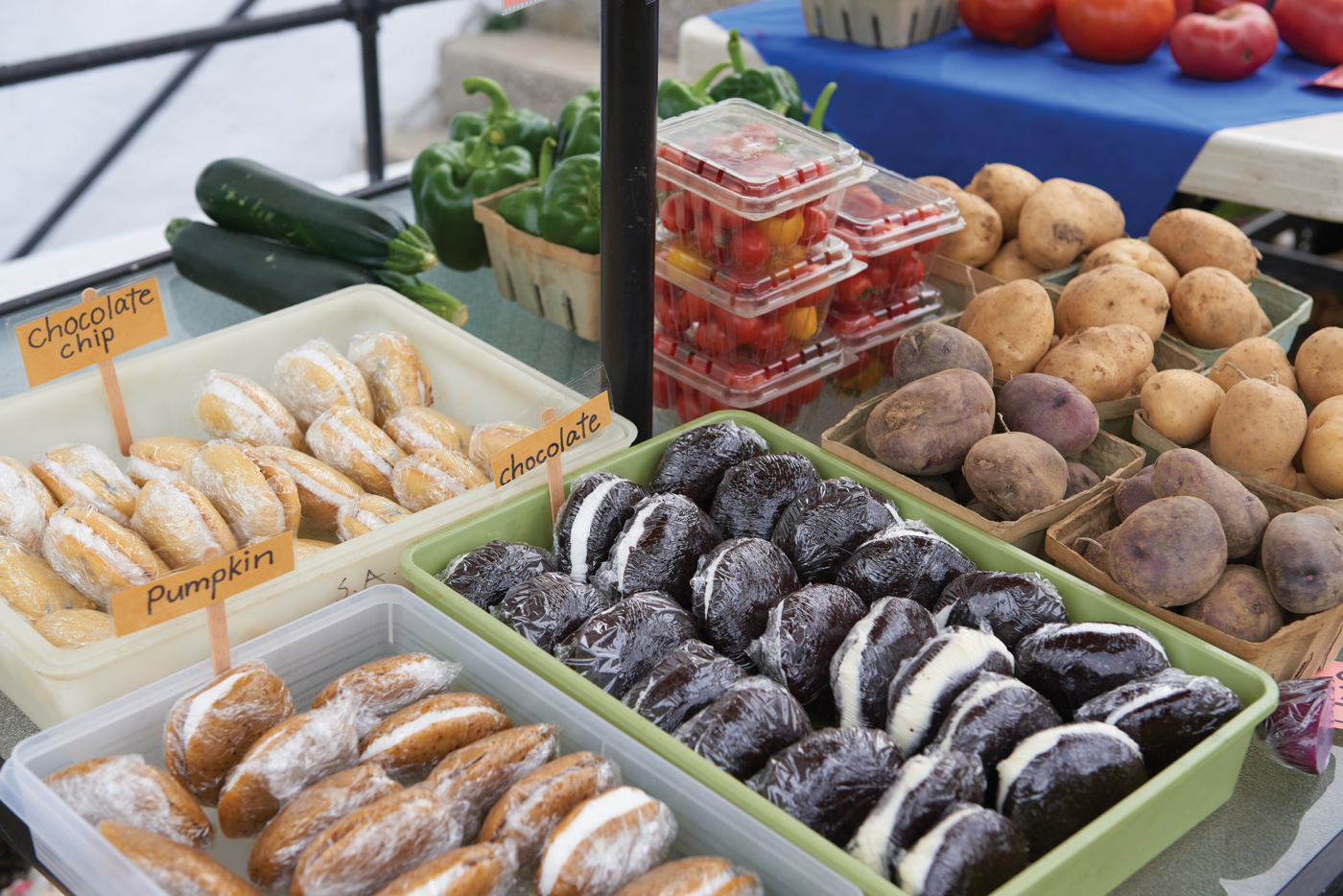 Whoopie pies and homegrown produce available after the breakfast event at ‘Til Hollow Farm.

“I’ve lived here all my life other than two years,” Benuel told his guests. “It’s important to me that the farm remains in the family,” he said, referring to its residents that range from his 90-year-old father to three younger generations of Allgyers. Benuel acknowledged that financial margins in farming have gotten much tighter over time. As a result, in 2007 the farm refocused its efforts away from solely being a working dairy operation. The reasons leading to diversification were two-fold and included “financial circumstances and poor dairy herd health,” Benuel explained.

Since selling the herd, the Allgyer farm has adapted and diversified by growing cash crops such as corn, hay and produce, as well as decorative produce including pumpkins and gourds. There are still a few dairy cows on the farm for the Allgyer family’s personal use. In addition, their home garden yields a bountiful harvest. Benuel now works in wholesale produce, with the next generation of Allgyers looking ahead to the day when they will manage the farm. 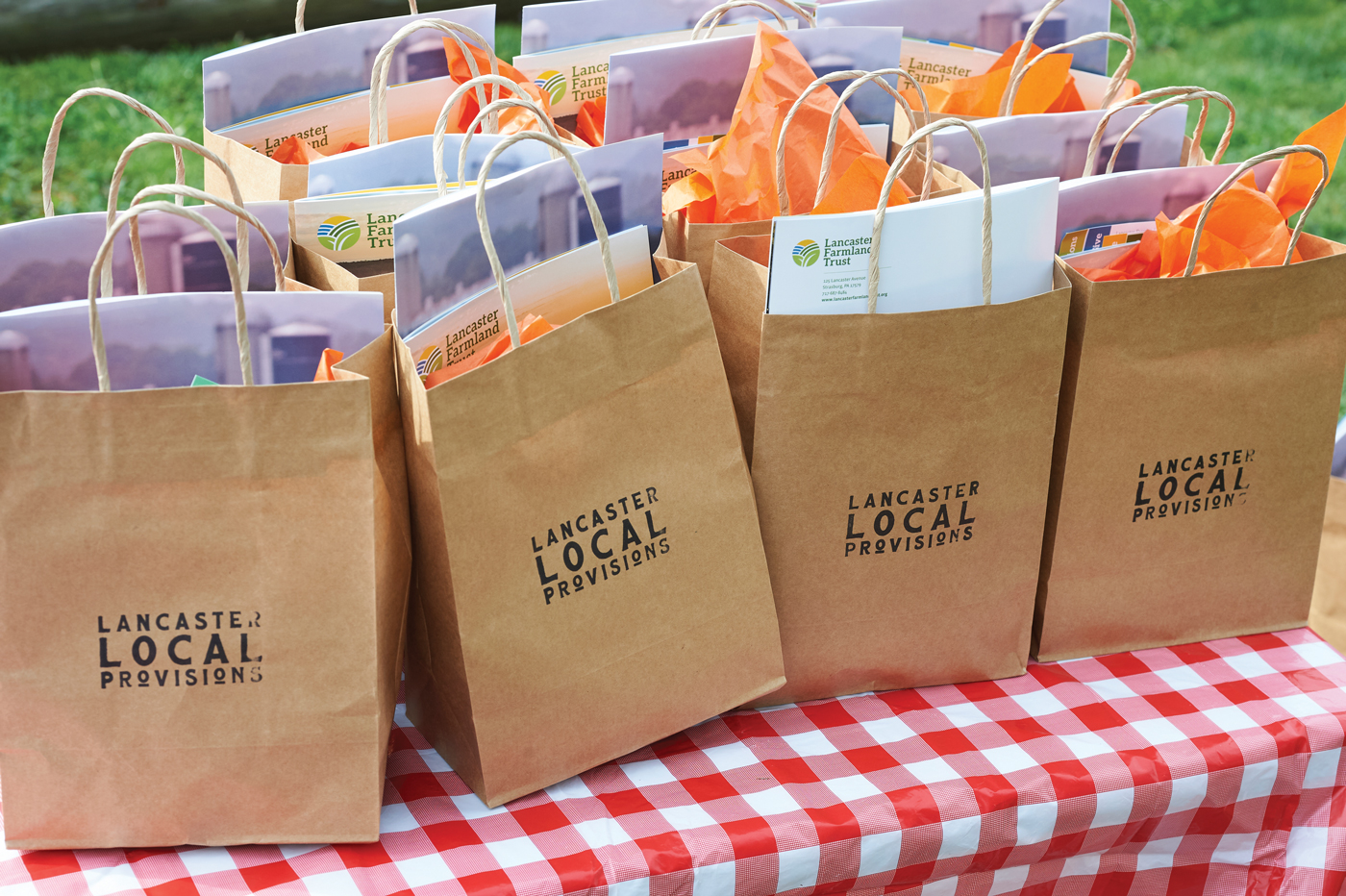 Goodie bags were provided by Lancaster Local Provisions, which offers weekly home deliveries of local produce and goods. The company “has partnered with Lancaster Farmland Trust to raise money and awareness for the preservation of farmland in Lancaster County.”

Following a tasty farm-style breakfast, Benuel and Sylvia Allgyer granted a conservation easement for their farm, which states their “… desire that the agricultural and open space character of their farm be preserved and protected forever and further desire and intend to transfer those rights and responsibilities of protection and preservation of the farm to Lancaster Farmland Trust.” The language of the easement includes a particularly notable line regarding stewardship, which reads, “… for the purpose of protecting the agricultural, scenic, natural, wildlife habitat, open space and water resource values forever.”

For farmers, connected farmland is highly valued, facilitating moving equipment from field to field at planting and harvest and for driving livestock from one area to another efficiently and safely.

For land developers, it also makes sense to take advantage of joined spaces where infrastructure is already present. Access to key roadways and established public utilities such as water mains, gas lines, sewer systems and electrical and communication lines, help to minimize costs. This general perspective was included in a comprehensive plan chock full of research called places2040, adopted by the Lancaster County Board of Commissioners in October 2018.

For those of us who are neither farmers nor home builders, there exists a less prevalent consideration that affects your household: tourism. Discover Lancaster cites that “An estimated 8.85 million visitors to Lancaster County directly spent $2.24 billion in 2018, creating a total tourism impact of $2.91 billion in the county.” What’s particularly relevant is the benefit of that generated tax revenue, which saves “each Lancaster County household from paying an estimated $1,060 annually in such taxes to maintain current services.” I don’t know about you, but that amount buys plenty of groceries in a year. 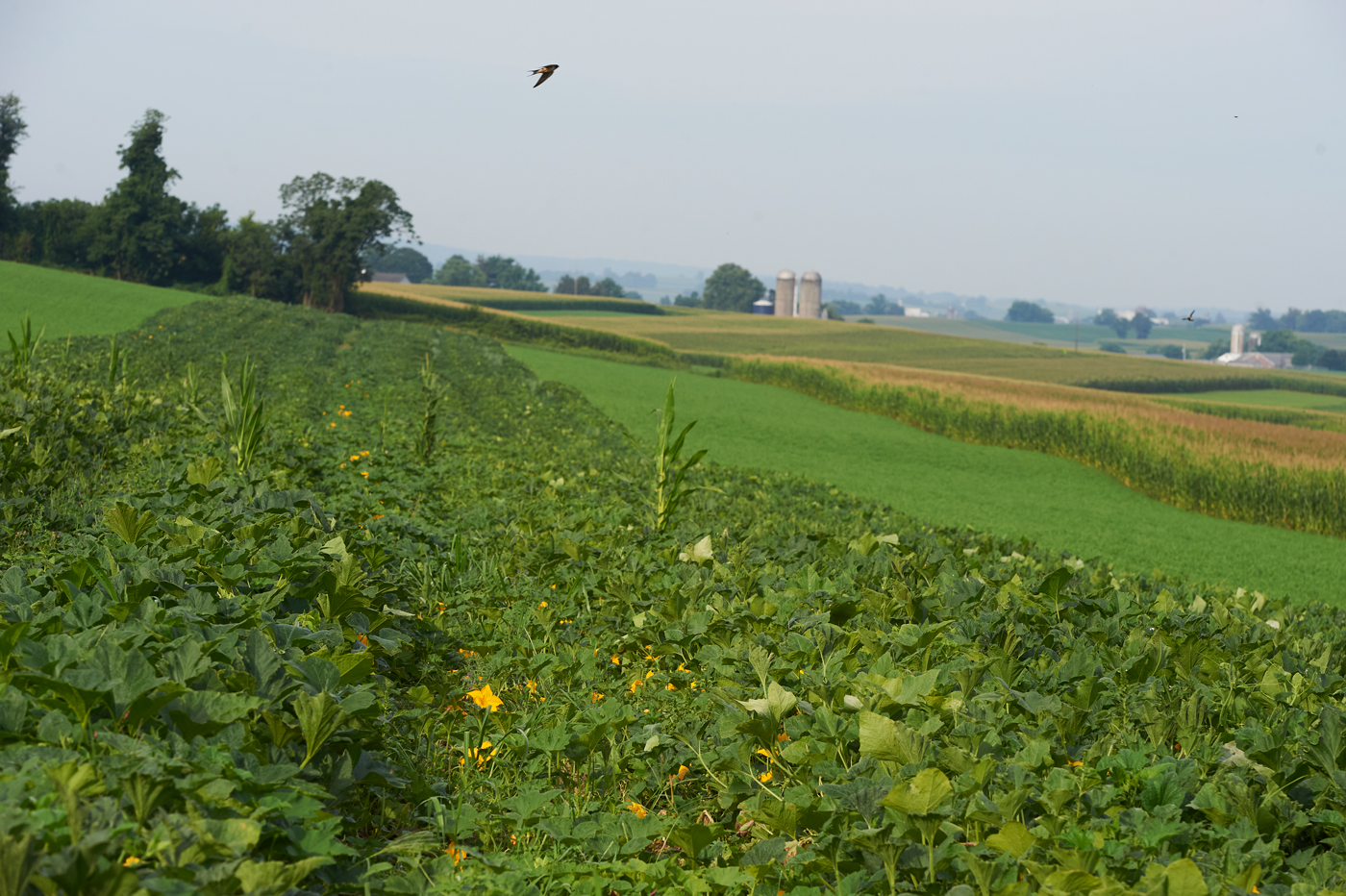 Setting aside jokes about slow drivers, tourism is one of our best resources, and experiencing large swaths of the countryside –
notably farmland – is key to a visitor’s Lancaster County experience. They want each visit to feel the same as the last, tapping into nostalgia from when they were kids. Too many changes can feel jarring.

Consider your favorite vacation destinations and imagine seeing the quaint bayside neighborhood your family visited for years turned into a hotel, or a neighboring property at the mountains completely stripped by logging. Forever is a long time, and some may argue that it’s presumptive to permanently limit the use of large swaths of land. 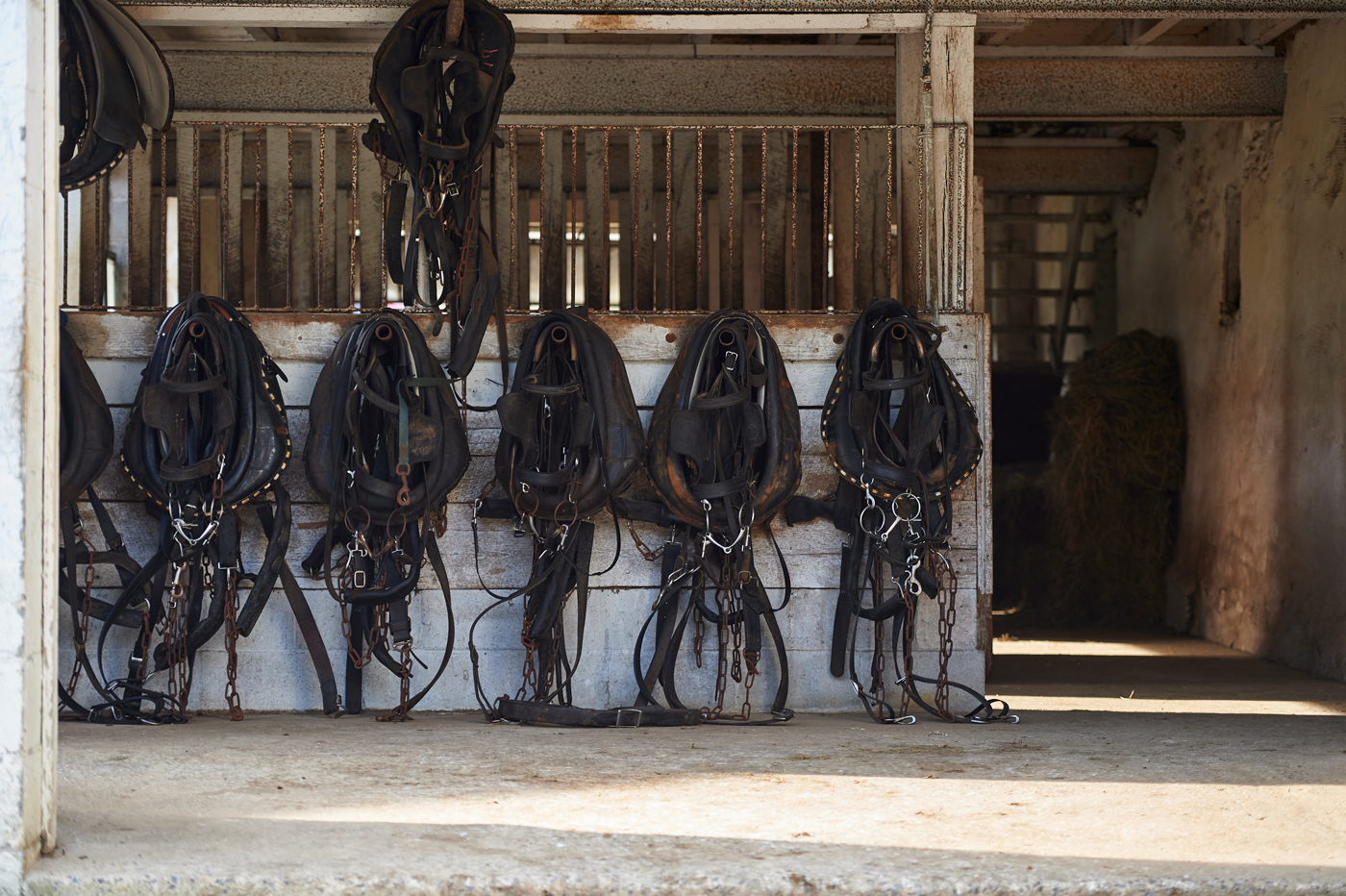 A potential supporting argument is a circumstance where a small parcel might have an arguably better use outside of farming and possibly benefit the farm in a land trade. If surrounded by development, is a farm more or less valuable to preserve? How important is the history? What are the gains of progress? Keeping a green space open as a bit of respite versus concentrating development in one area and preserving a complete section of land elsewhere?

Whatever we decide, we’re stewards of this beautiful countryside. In the words of William Penn, “I expect to pass through this world but once. Any good therefore that I can do, or any kindness or abilities that I can show to any fellow creature, let me do it now. Let me not defer it or neglect it, for I shall not pass this way again.” 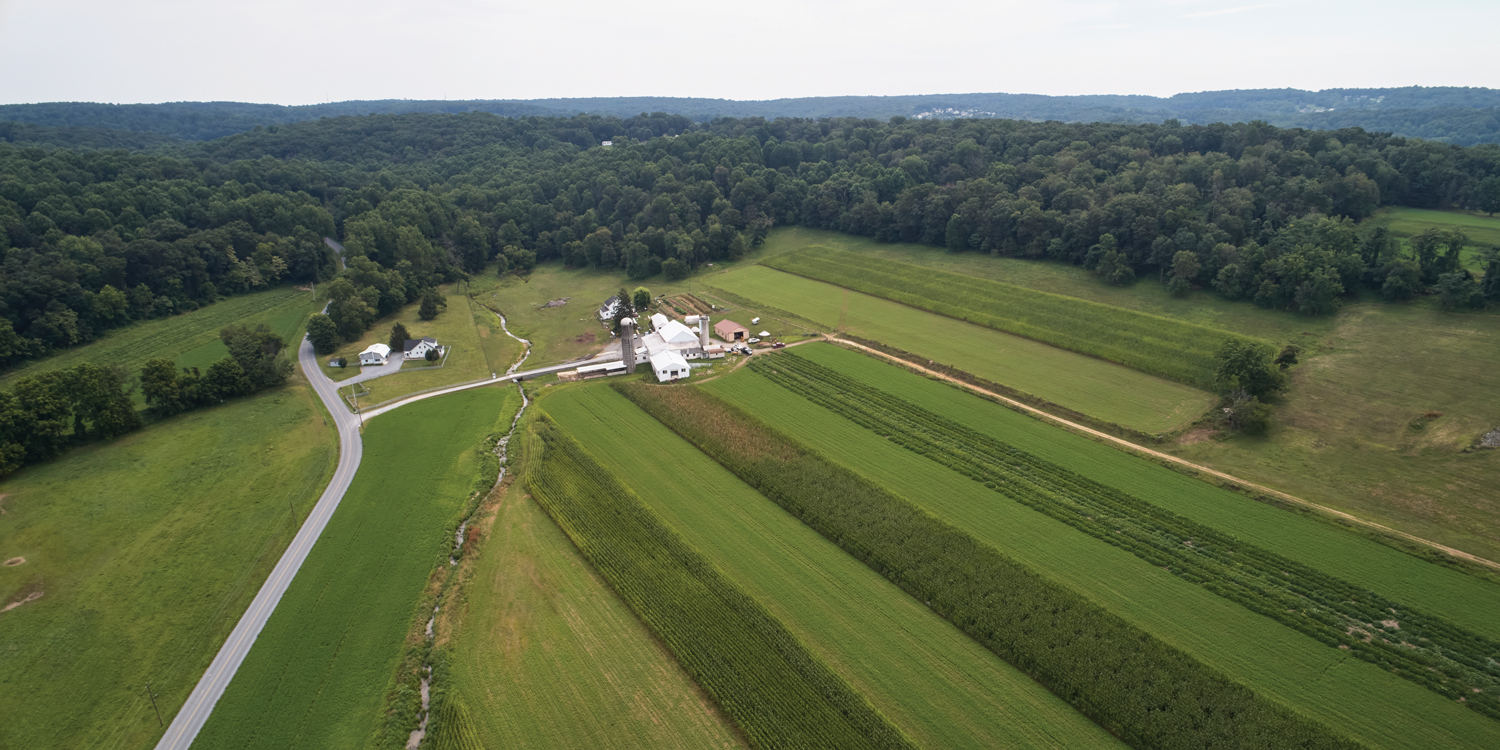