What better place is there to get married than a vineyard?  This month, to celebrate the heart of outdoor wedding season, I chatted with two local brides about their winery weddings. 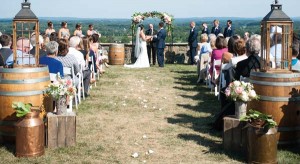 The Virginia countryside provided the backdrop for Melanie and Max Miller’s wedding, which was held last August.

Melanie Orlins, a news anchor on Fox 43’s morning show, knew before she was even engaged that she wanted to get married at the first winery she ever visited – Bluemont Vineyard in Virginia. Melanie wanted an outdoor wedding, and she liked that the vineyard, located about 30 minutes from where she grew up, featured an on-site ceremony location in an open grass area, plus it offered one of the best views in Virginia, overlooking the Shenandoah River and the Blue Ridge Mountains. On a clear day, with the aid of binoculars, she says you can see the Washington Monument from the ceremony site.

Her wedding day – August 15, 2015 – offered up a balmy 95 degrees without a cloud in the sky. Though she admits August wasn’t her first choice for an outdoor wedding, she reports the venue is very popular and books quickly, so the choice of dates was somewhat limited.

As a special touch during the ceremony, Melanie and her groom Max Miller created a “unity wine,” a play on the popular unity candle, whereby they took a red and a white wine and poured them into a vase to symbolize the joining of their lives in marriage.

Melanie’s favorite Bluemont wines – The Cow, a vidal blanc, and The Pig, a Norton – were served at the reception (in addition to beer and liquor, which were permitted by the venue). Many guests enjoyed their drinks directly from their wedding favor: monogrammed Mason jar mugs.

Melanie says she loves wine and wine-tastings, and you’ll generally find her drinking light whites in summer and bold reds in winter. “If you’re going to get married at a winery, you’ve gotta love wine,” Melanie says. “I think then you appreciate the atmosphere more and appreciate the spot where you’re getting married.”

Aside from the views and delicious wines, Melanie says the Southern, down-home style of the vineyard and the terrific staff made for a perfect day. “If I had to rate the experience, it would be a 12 out of 10,” she says. 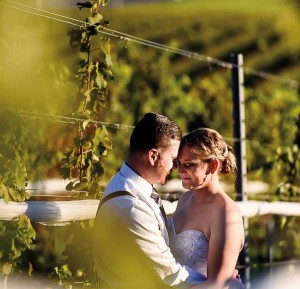 Ben and Ashley Miller held their wedding at The Vineyard at Grandview last October. Photo by April and Bryan Photography.

She reached out to several local locations and was contacted by Kristin Kuhn, wedding coordinator at the Vineyard at Grandview in Mount Joy, who said she had Ashley’s first choice of a wedding date, October 10, 2015, available. Ashley had never visited Grandview before, so she and Ben (plus her mom, his mom and stepdad, and his dad and stepmom) decided to visit and check it out.

They did a tasting and chatted about details. Ashley learned that Grandview has two options for the ceremony site, a lawn area with an archway or a cove with a gazebo. The venue also has a pavilion for receptions.

The bride and groom chose the cove for their ceremony site and were married in front of the gazebo with 125 guests in attendance.

Grandview requires that couples use only their wine for the reception. Ashley chose Grandview’s Sapphire White, pink moscato and Ruby Red to share with their guests. She and Ben toasted with Diamond Dust, a Grandview sparkler. Grandview also allows couples to bring in beer, but they request that it’s a local microbrew. So, the Millers chose their favorites from brewers Troeg’s and Victory.

And despite being “beer people,” Ashley says they’ve been back to Grandview several times to buy bottles of the “absolute crowd favorite,” pink moscato. “It’s delicious,” she raves. 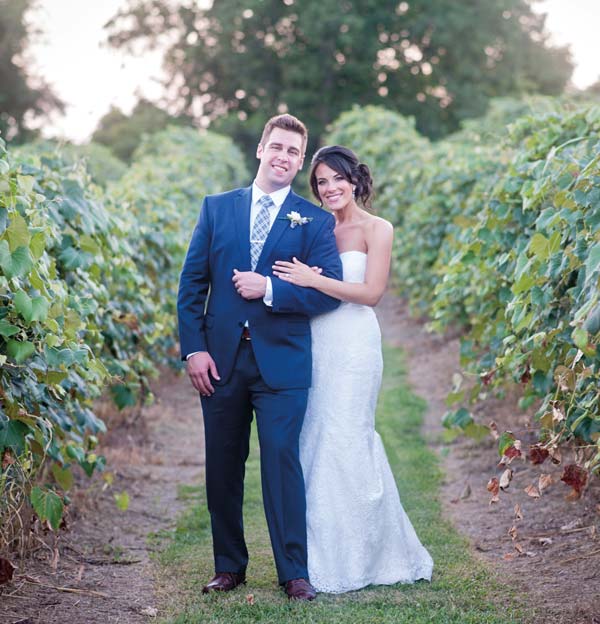 The vineyard’s grapevines provided the background for Melanie and Max’s wedding photos that were taken by Melanie’s co-anchor, Amy Lutz. Traffic Reporter Chris Garrett served as the DJ for the reception.