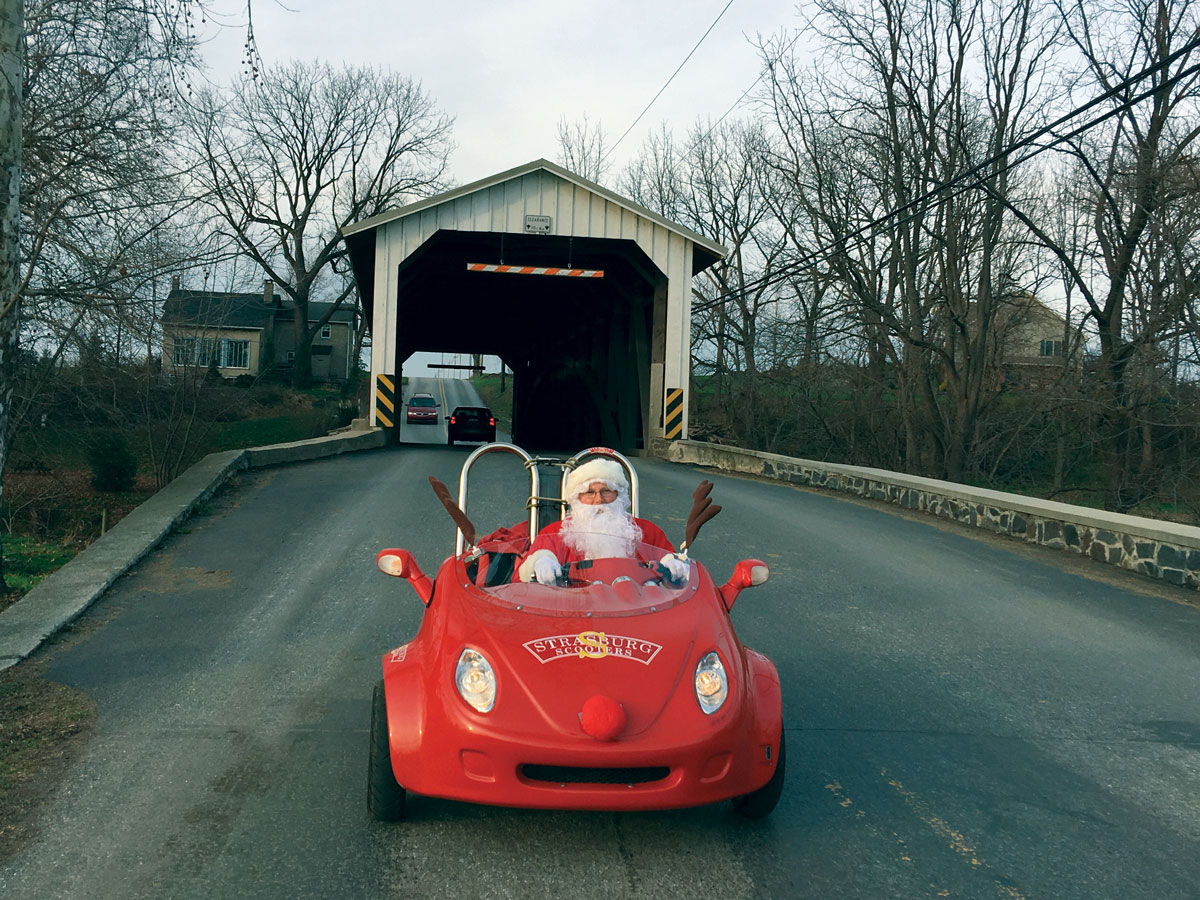 Marc Crusemire often dons a Santa suit to lead the Scootin’ with Santa tour that takes customers along the backroads of Lancaster County. Tourgoers have the option to ride Honda or Yamaha scooters or take to the road in a Scoot Coupe. The tours have proven to be popular with couples enjoying week-long vacations in Lancaster, groups visiting the area for getaway weekends and locals looking for something unusual to do as part of a staycation.

Amtrak has its trains, Greyhound has its buses, the Amish have their buggies, and Santa has his sleigh. However, this holiday season, Santa – aka Marc Crusemire, the co-owner of Strasburg Scooters – is trading in his sleigh for a 50cc Scoot Coupe, and he wants people to join him as he travels “over the bridges and through the woods” of Lancaster County.

Marc, who lives in Strasburg with his wife and business partner, Nikki, loves his job. He does not consider it work at all. After all, who wouldn’t enjoy riding around on a scooter all day! 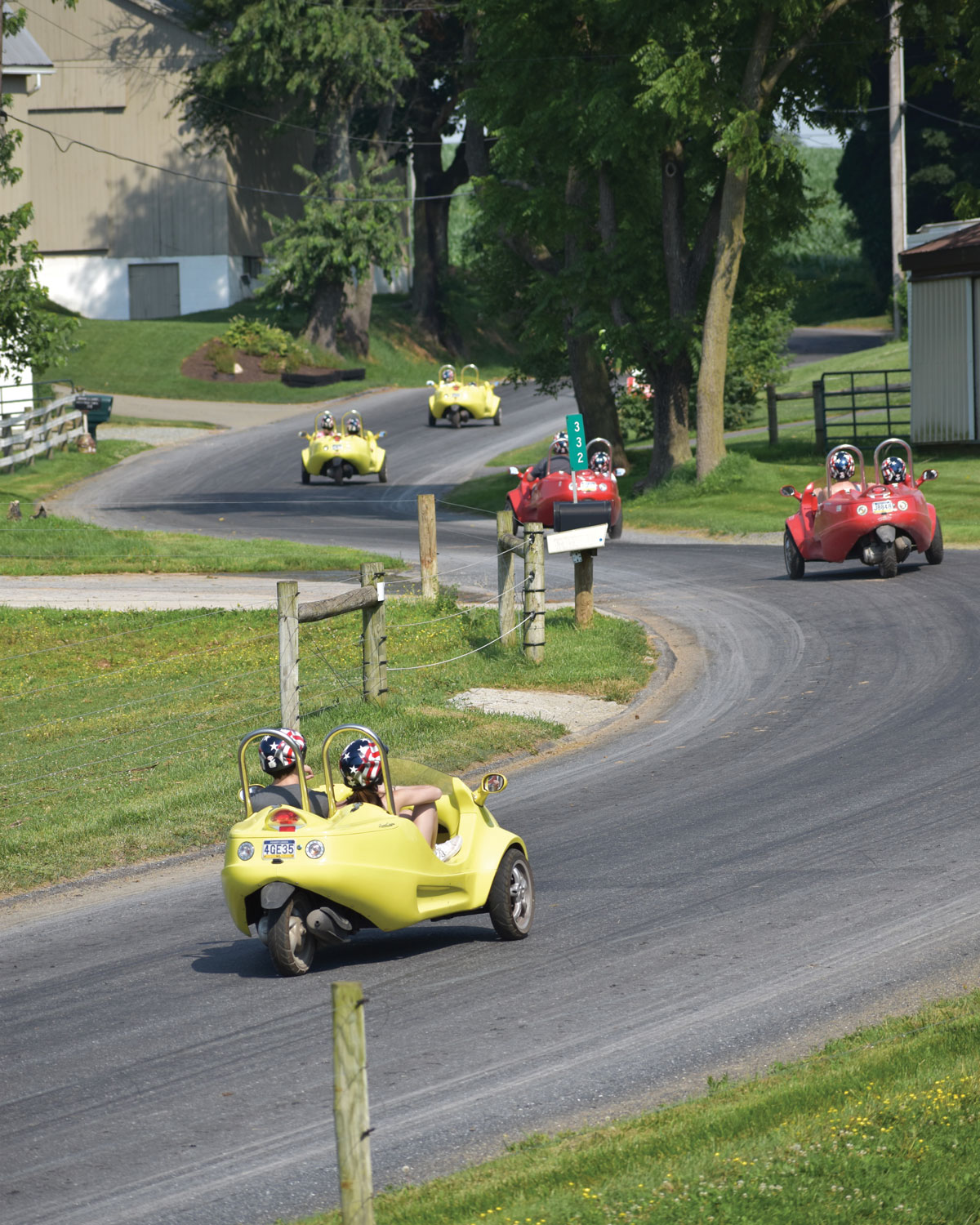 The holiday-oriented Scootin’ with Santa Tour begins November 30 and goes through December 22. True to the theme, Marc dons a Santa suit and dresses up his coupe with reindeer antlers and a red nose to lead his guests over covered bridges, past Amish farms and schoolhouses, over rolling hills and by peaceful, resting fields. Complimentary coffee and hot chocolate are provided to warm guests along the way. He likes to think of this tour as a uniquely exciting way to get into the spirit of the season while reconnecting with the “open road.” Oh, yes, gift certificates are available. 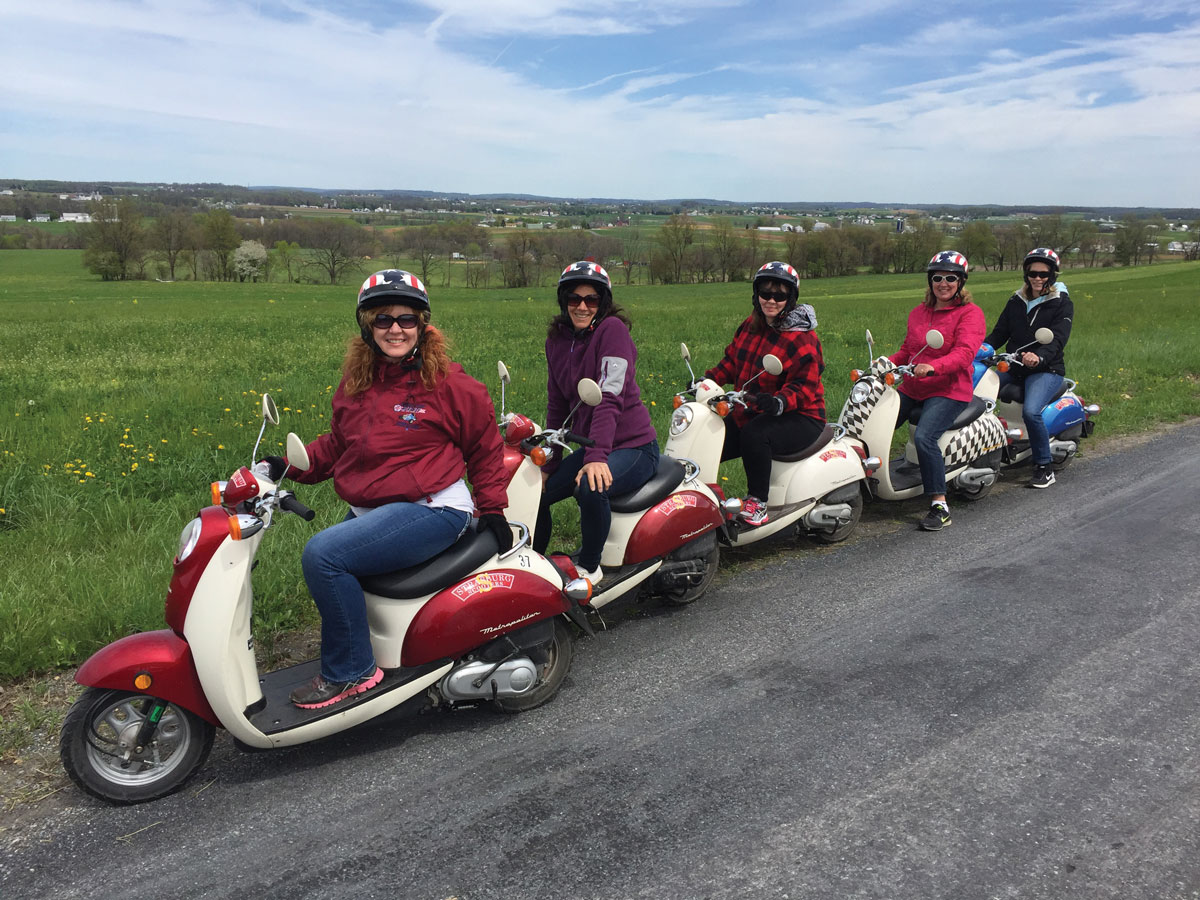 Marc’s second act as co-owner of Strasburg Scooters came about after several decades of working in advertising and publishing.

A native of Bucks County, Marc is a graduate of Council Rock High School in Newtown. He says, “I learned early on I was not a great writer, per se, but a creative one instead.” This revelation led him to Temple University, where he majored in journalism with an emphasis on advertising. He received his BA in journalism in 1981.

By the age of 36, Marc found himself working in the newspaper business as an advertising director. “It was great! I had reached where I wanted to be,” he says. He supervised a staff of nearly 40 people, and he was responsible for generating more than $40 million in revenue. On the flip side, he was putting in insanely long workdays to make the magic happen. 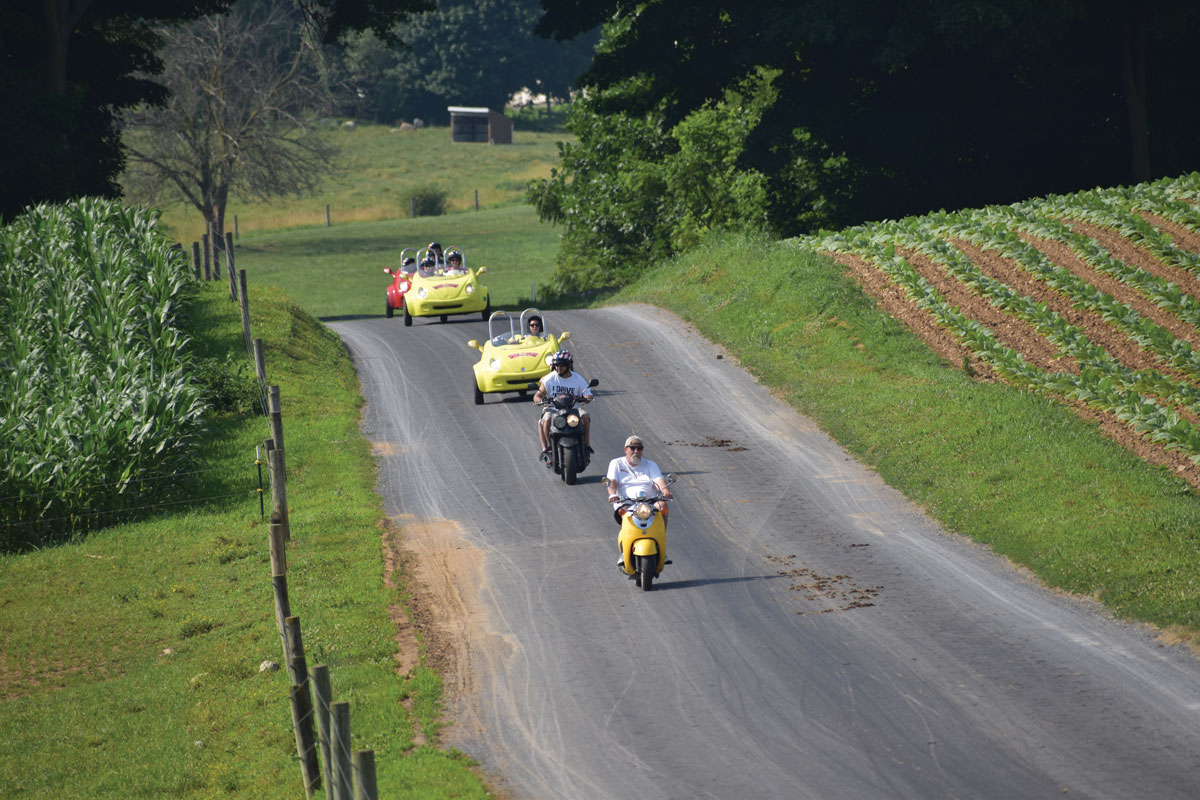 A company relocation to West Chester became the pivotal point for Marc. He had had it with the corporate world and gave notice he was leaving his job.

Marc weighed his options for a few months before he came across TravelHost, a travel-related magazine that is distributed through hotels, motels, etc. Based in Irving, Texas, the company partners with entrepreneurs across the country to publish magazines whose content is unique to their cities or regions.

Marc ultimately formed his own company, 360PA Media Solutions, through which he published TravelHost Magazine of South Central Pennsylvania, which was distributed across five counties, as well as other publications. He exited the business in 2015.

Marc and Nikki moved to Lancaster County in 2007. While he was still involved with TravelHost, he made another bold move by going into the scooter-rental business. (He had met a businessman in Bird-In-Hand who piqued his curiosity about scooter rentals.) According to Marc, he thought, “This could be fun!” 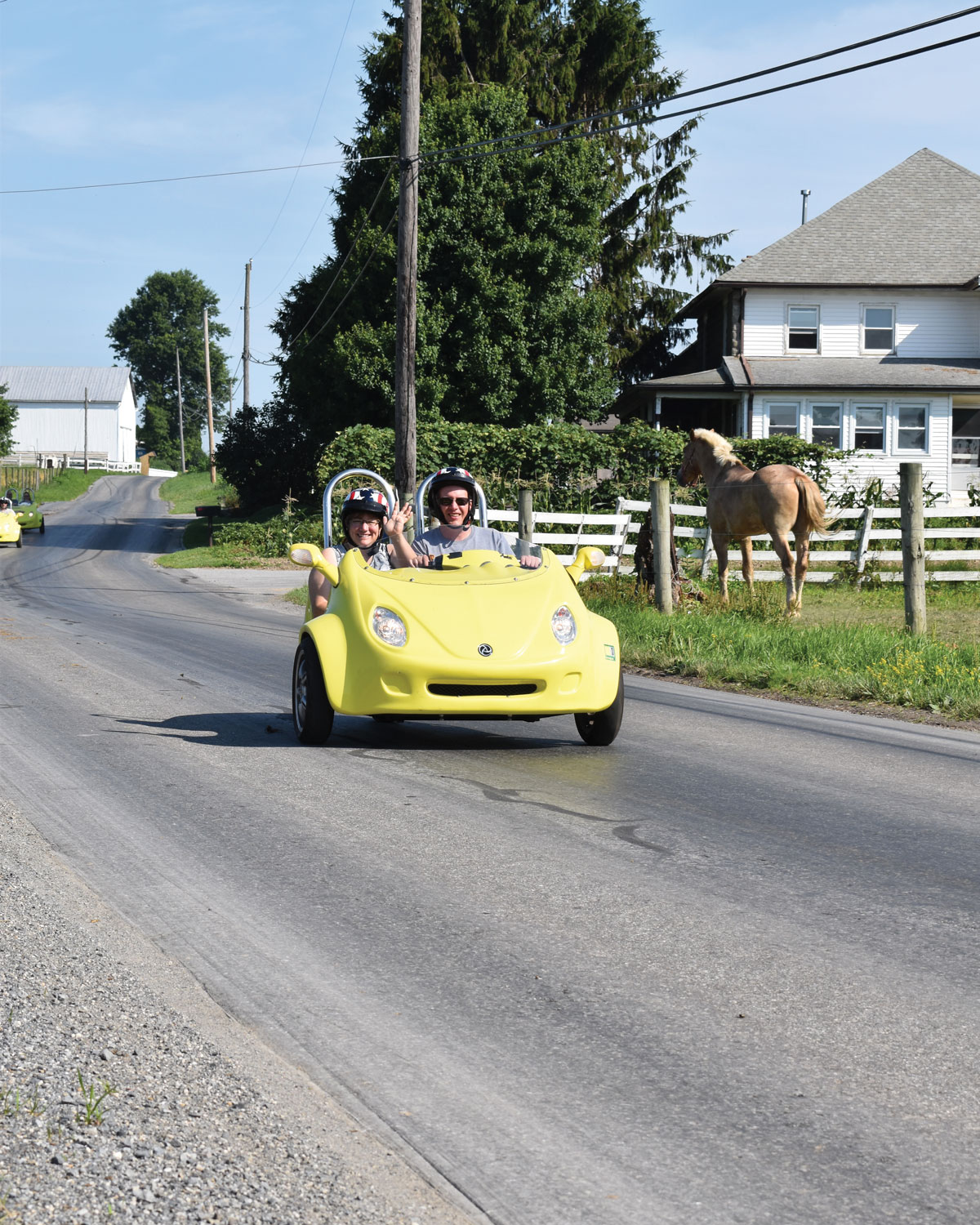 Three months into the venture, he decided it was not quite what he expected. So, he developed a guided tour using multiple types of scooters. Sharing Lancaster County via scooters proved to be so successful that after two years, he was exclusively concentrating on tours.

Strasburg Scooters is in its eighth season of operation. It continues to be headquartered in Strasburg, with a second location in Bird-in-Hand. The company employs seven tour guides and one part-time office person.

For many of the tour guides, Strasburg Scooters qualifies as their own “second acts.” In the past, they’ve been paramedics, firefighters, military service personnel and teachers. One tour guide grew up riding dirt bikes and three-wheelers and, as Marc will tell you, “She’ll make the tour so much fun you’ll want to buy [a scooter] when you get home!” 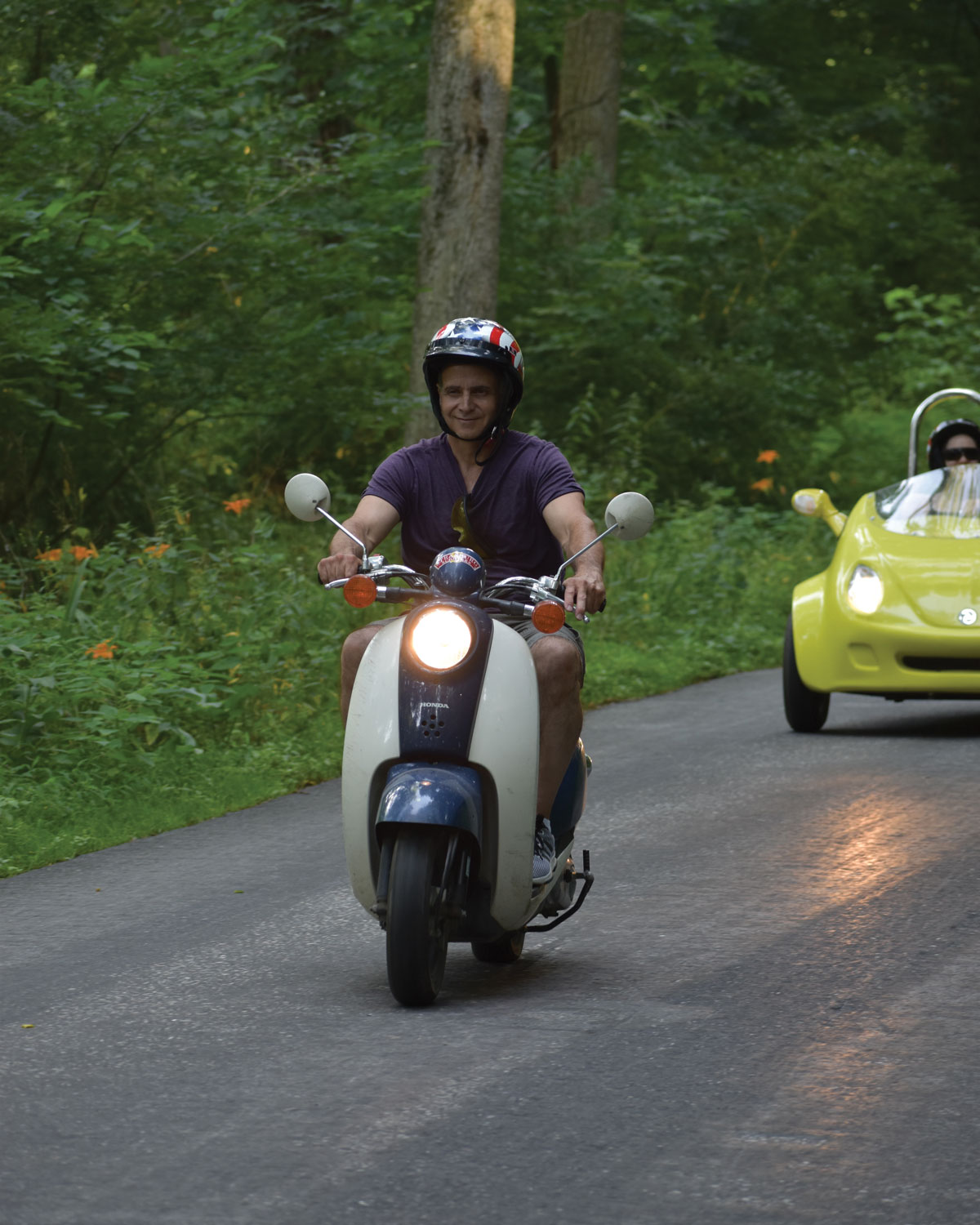 All the guides love showing off the beauty of Lancaster County and sharing their knowledge of the area’s history. Strasburg Scooters received the 2019 Discover Lancaster Spirit of Creativity Award for its Ice Cream Experience Tour. The company also earned a 5-star Trip Advisor rating.

Marc is adamant about safety first, having had 15 years of experience as a firefighter (he is a past president of the East Brandywine Fire Company). “I like to treat our guests the way I would want to be treated,” he says. “Each tour is based on safety and fun.”

A guest must be at least 18 years old with a valid driver’s license. According to Marc, riding a scooter is easy. “If you can ride a bike and pay attention, you can do this.”

Marc, now age 50, can say he followed his dream. He created a business that is fun for everyone involved, as well as profitable. His advice to anyone seeking a career change is, “Follow your dream. It is only a dream until you take action.”

Strasburg Scooters is located at 246 North Decatur Street in Strasburg and at 2705 Old Philadelphia Pike in Bird-in-Hand. For more information, call 717-344-2488 or visit strasburgscooters.com.

Marc Crusemire often dons a Santa suit to lead the Scootin’ with Santa tour that takes customers along the backroads of Lancaster County. Tourgoers have the option to ride Honda or Yamaha scooters or take to the road in a Scoot Coupe. The tours have proven to be popular with couples enjoying week-long vacations in Lancaster, groups visiting the area for getaway weekends and locals looking for something unusual to do as part of a staycation.