Ice cream first hit the streets of Paris in 1660; the recipe blended milk, cream, butter and eggs to create a new taste sensation. For the next 200 years it remained a treat for the elite. Technological advancements that made delivery, storage and production easier enabled ice cream to reach the masses at the dawn of the 20th century. Today, the International Dairy Foods Association projects the U.S. production of ice cream to be more than 1.6 billion gallons annually.

While ice cream is a global phenomenon, it seems as if Lancaster County has more than its fair share of wonderful places to enjoy a cone. I put out a call through social media to get a roundup of some of the most popular spots. This list is in no way comprehensive! Here are four to try: 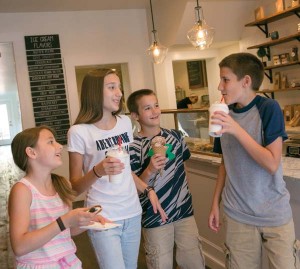 One spot that comes highly recommended is Pine View Dairy. I added the stop to a recent day trip around the Susquehanna Valley. Founded in 1971, this ice cream hot spot makes all of its flavors on premises. The allure of Pine View Dairy is not just the ice cream, but the source of the ice cream itself. Visitors are welcome to watch the milking process of the 165-head Holstein herd. Milking times are daily at 5:30 a.m., 1:30 p.m., and 9:30 p.m. Visitors can also pet some of the younger cows who hang out right next to the ice cream service window.

Hold the presses! You can now enjoy Pine View Dairy ice cream in downtown Lancaster, courtesy of the Lancaster Sweet Shoppe, which opened Memorial Day weekend. In addition to ice cream, this old-fashioned shop is the place to find Groff’s Candy and Stroopies, a cookie-like confection that originated in Holland. 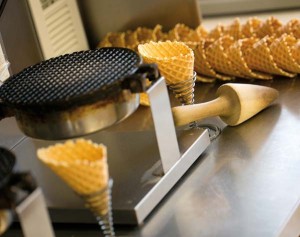 Right outside New Holland Borough sits another highly recommended place to enjoy a cone, Lapp Valley Farm. After a half-day of school, I grabbed my son and headed out to this Plain homestead. There are no real bells and whistles here; the homemade product speaks for itself. I had the chocolate almond, and my son had a perfect kids’ scoop of black cherry.

You won’t find their Facebook page (but they do have a perfect rating on 250 TripAdvisor reviews).  Google and GPS will get you close enough to read the sign and let you know you’re at the right place. This once locals-only, hidden gem has been inundated with traffic – both local and tourist – since the advent of the Internet. But, Lapp Valley is happy for the business; they simply ask visitors to respect their Christian values and understand this is a working farm. 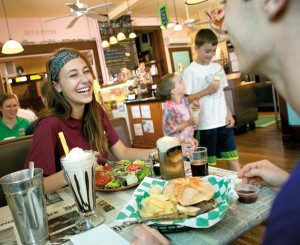 The husband and wife team of Mitch and Gina Dissinger opened Lickity Split in 2010. Their ice cream truck opened the door to building a “blast from the past” ice cream parlor in a historic, downtown New Holland spot – the former Kauffman’s Hardware building.

Many people flock to Lickity Split to enjoy the ice cream; they serve Tamaqua-based, award-winning Leidy’s Premium Ice Cream. Just as popular, though, is the restaurant’s food menu. The extensive list of sandwiches is named (mostly) after local historic places and landmarks. Take the Clarion (a.k.a. the Rachel); it is named after the town’s now-defunct newspaper. One of the most popular sandwiches makes a seasonal delight available year round. The Thanksgiving Day is roasted turkey topped with warm stuffing, cranberry sauce and mayonnaise on a Kaiser roll! 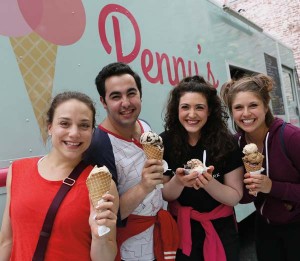 I’d actually never heard about Penny’s until I put out the question of “What is your favorite ice cream spot?” to all my Lancaster County friends on social media. So, I put in a call to co-owner Caleb Kauffman to find out what this new ice cream truck is doing roaming the streets of Lancaster City. Turns out Penny’s doesn’t roam much at all.

The idea formed around an opportunity. Kauffman’s long-time ice cream haunt was Carmen & David’s on Prince Street, so when the popular storefront closed, he seized on an opportunity.

“It was very sad for the community, and I thought it would be really cool to keep Carmen & David’s around,” says Caleb, who opened Penny’s in June 2015. “I am excited by the fact of what we did with Penny’s; we made a family- and community-friendly ice cream truck,” he says.

In an effort to make Penny’s an homage to the original ice cream shop, Kauffman tries to keep at least a dozen Carmen & David’s flavors on hand, rotating new choices in periodically.
Ninety percent of the time, Penny’s is parked at the Lancaster Pop-Up Park on North Prince Street, but check their Facebook page or website to confirm its whereabouts.

Standout specialty: Caleb’s favorite varies from day to day, but he is especially fond of one of the top-selling flavors, Peanut Butter Oreo. 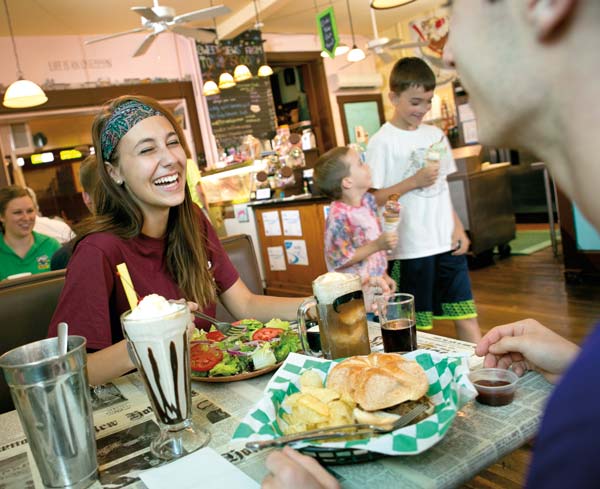