Groundcovers include a diverse group of plants that often have great individual beauty and can stand on their own as specimens or accent plants in a border. Combined with more structural plants, they create a fully dimensional garden throughout the year, relating to taller herbaceous plants and woody shrubs, as well as to stonework, pathways and fences. Since fall is a great time to plant, why not get a head start on spring!

Groundcovers. Such a label makes this group of plants sound merely utilitarian. Yes, the designation usually characterizes the lowest tier of the garden, plants that colonize the ground by spreading via underground rhizomes (alas, sometimes out of reasonable bounds), but there are also many clump-formers to consider. They are plants that one hopes will not only keep maintenance down but also contribute to the richness of our gardens, large and small. Plus, if you read and absorbed my two columns last year on turf, you know that I consider anything that reduces the area of lawns to be environmentally desirable.

My focus is on selections for shady areas because as trees mature on larger properties, sections are no longer sunny, and oftentimes, urban homes have yards on the north side. Many gardeners regard this as a problem, but, as the saying goes, why not consider it an opportunity? Remember those 92-degree days this past June and how nice it was to work in the shade?

Hostas are the first plants that come to mind for the shady areas of the garden. And with good reason, since there are so many beautiful selections available, displaying foliage in all shades of green, even gray, gold and variegated. Unhappily, gardeners often find the leaves disfigured by night-foraging slugs and snails, plus they are considered a delicacy by deer who chew them to the ground. Fortunately, there are other options.

Groundcovers for Part- and Full-Shade

Heucheras (common name Hairy alumroot) are terrific alternatives to hostas. Now, be aware that there are far more heuchera cultivars on the market than anyone needs because it is a “hot” plant these days. However, you won’t go wrong with a well-established one – Heuchera villosa ‘Autumn Bride’. The species is native to rocky slopes from Virginia into the South. I plant it as a mixer or in drifts in part-shade to almost full-shade areas because it is low-maintenance, and the deer do not browse. The foot-high plant displays large, velvety (villosa=hairy) medium-green leaves throughout the season. In early fall, it sends up airy panicles of (obviously for a bride) white flowers. This selection tolerates our hot humid summers better than all the others. The only problem I’ve had with heucheras is root heaving in winters when there is repeated freezing and defrosting of the soil. Plants can be divided every several years. 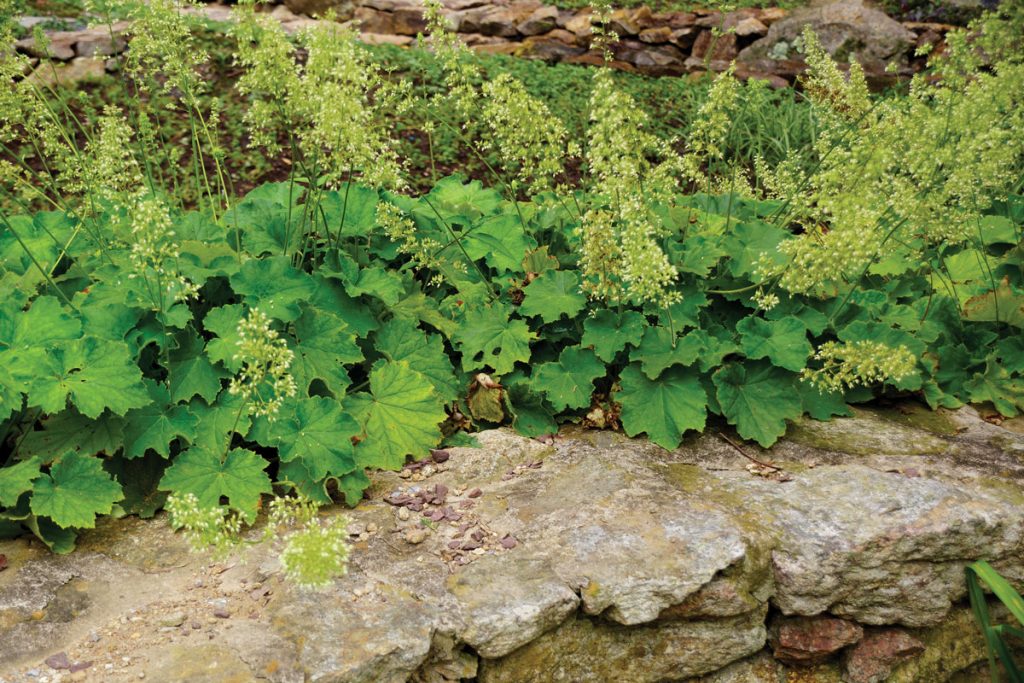 Ferns, of course, also come to mind for shady areas, and there are so many appealing ones that gardeners sometimes become obsessed with collecting them. I’ve warned readers in past journeys to be careful where they plant the tall ostrich fern, Matteuccia struthiopteris. Turn your back, and it will take over your entire landscape, proving that native plants can be thugs, too!

A better-behaved and far more attractive fern for the home garden is the Japanese painted fern, Athyrium niponicum var. pictum. It features a slowly spreading clump of variegated fronds to 20-inches long. I guarantee love at first sight. The fronds are a soft gray-green with an overlay of silvery hues accented by tones of raspberry, rose, pewter, gray and olive with contrasting dark maroon midribs. Like most ferns, it prefers organically rich and well-drained soil. (The soil must not be allowed to dry out.) Painted fern naturalizes well and can form dense colonies in optimum growing conditions. Silvering is best for several weeks in the spring, with fronds becoming greener when hot temperatures arrive. 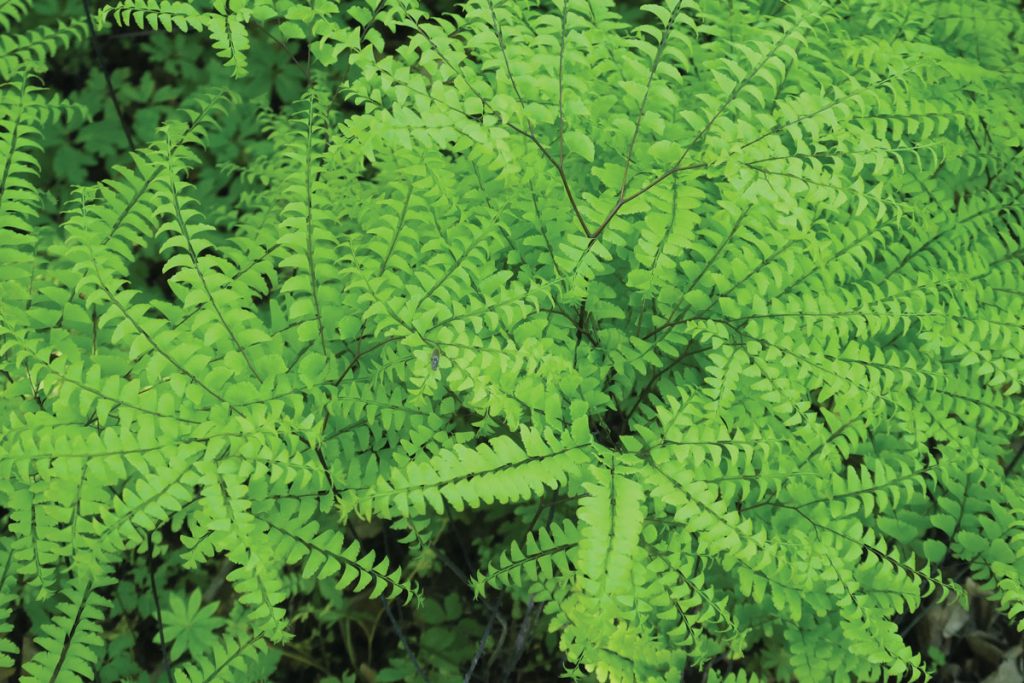 Another choice fern for similar conditions is the native Adiantum pedatum Maidenhair Fern. The habit of this dainty plant is difficult to describe. Its whorls of umbrella-like fronds are divided into finger-like projections above wiry 12- to 18-inch black stems. Magic. Maidenhair fern spreads slowly but can eventually form large colonies. The stems were used in basket weaving by Native Americans.

Since most brunneras – commonly called Siberian bugloss – scorch in hot summer sun, why not let them enjoy the coolness in your shady areas. How about one with distinctive silvery-white leaves with green veins and a thin green rim around the leaf edges? That cultivar is Brunnera ‘Jack Frost’. Be sure it has organically rich soil, and don’t let it dry out. It spreads slowly. Small forget-me-not-like flowers of light blue will appear above the 12- to 15-inch-tall foliage in spring, but it’s the extraordinary foliage that will catch your visitors’ eyes all season long. 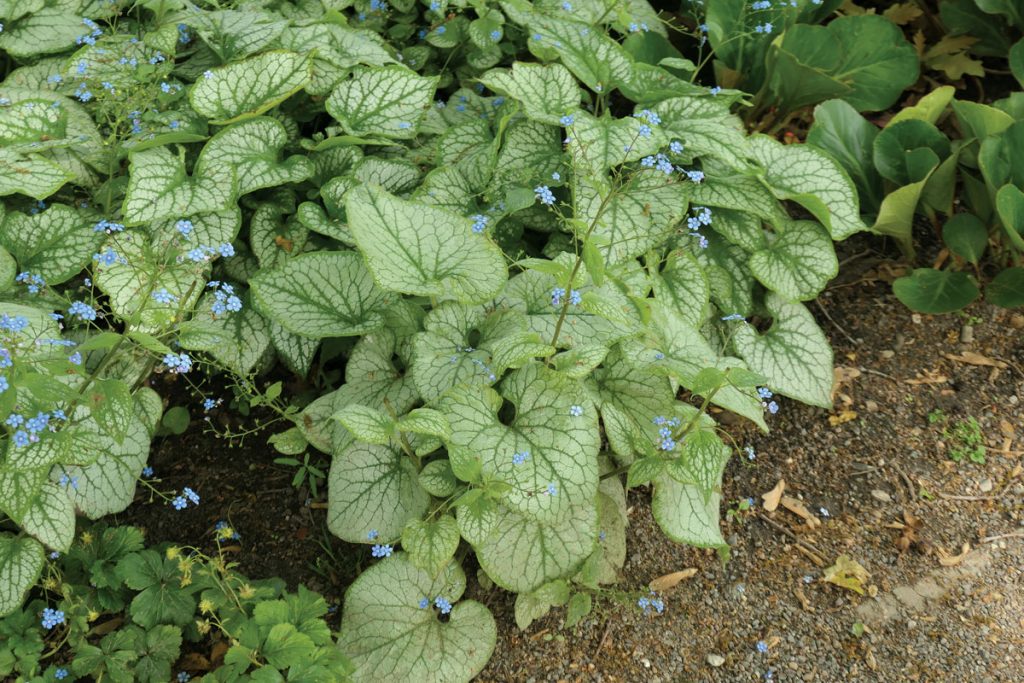 The borage family member cultivars of Pulmonaria, commonly called lungwort, are also prized for their foliage, but all will bloom in mid-spring with blue, purple or pink flowers. There are many named selections to choose from including ‘Mrs. Moon’, ‘Margery Fish’, ‘Sissinghurst White’, ‘Roy Davidson’ and even ‘Dark Vader’. Different cultivars will be spotted, marbled, mottled and marked with cream, gray or silver. In some cases, the flowers, which look like Virginia bluebells, open pink and mature to bright blue. They will all do best in humusy soils that don’t dry out and will add attention-grabbing foliage even in heavy shade. The foliage is one of the earliest to appear in the late winter, but later there is a risk of going dormant during extended dry periods. Deer do not bother it, and lungworts will even grow under a black walnut tree. In favorable conditions, some will self-sow. The Latin refers to lung because the foliage reminded someone of the appearance of a slice of lung tissue. 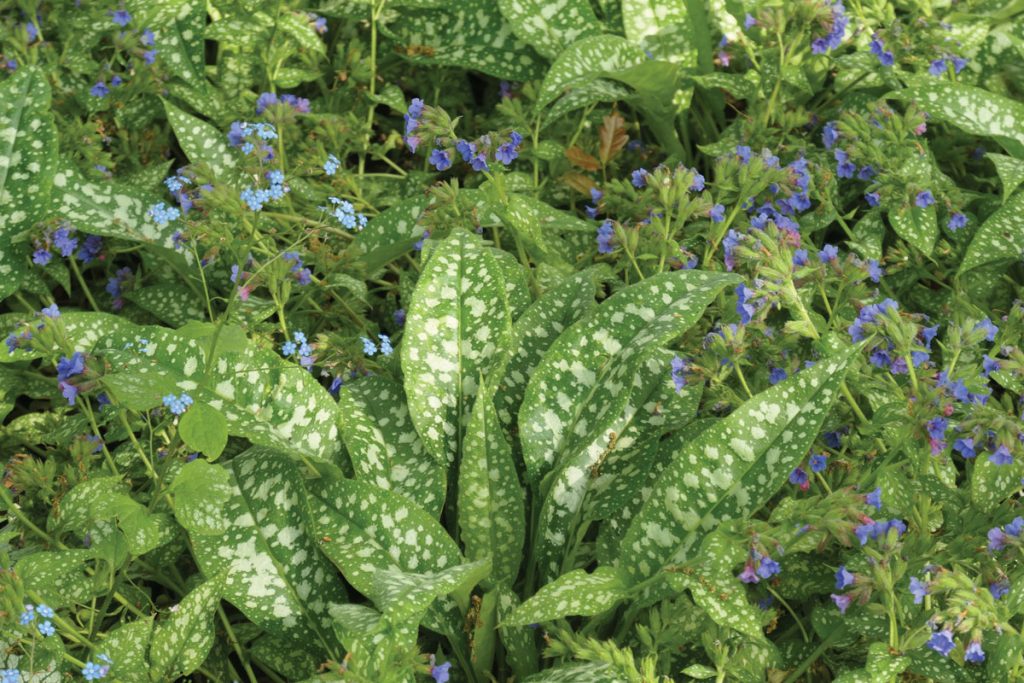 Pigsqueak Bergenia cordifolia is more commonly referred to simply as bergenia. But since you ask: it’s because of the noise produced by rubbing a leaf between thumb and finger. This is another easy substitute for hosta for average soil in part- to full-shade. The large, glossy, dark-green leathery leaves are heart-shaped and form thick clumps that grow to a foot tall. Dense panicles of small dark-pink flowers appear above the foliage in April. The foliage turns purplish-bronze in winter. Bergenia will usually exhibit winter foliage damage in our area, which needs to be removed in late winter. It spreads slowly by underground rhizomes and is reported easy to grow from seed. I’ve seen the attractive leaves used in table arrangements. 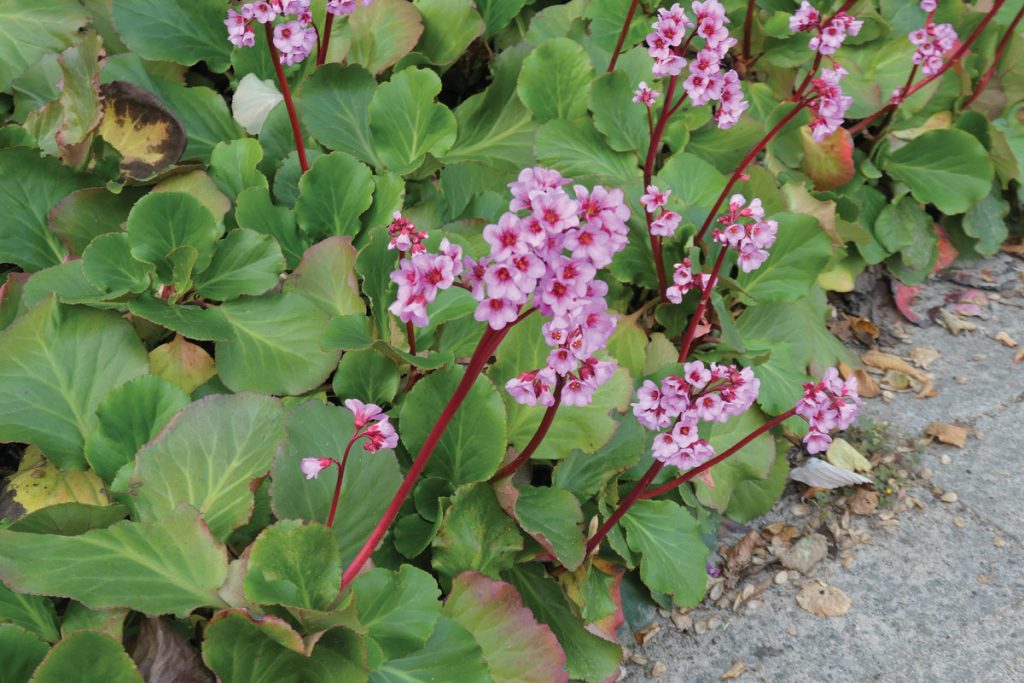 Readers might also be looking for an alternative to the ubiquitous Japanese pachysandra, Pachysandra terminalis. The less well-known, and underused pachysandra, Pachysandra procumbens, Allegheny spurge, is far less aggressive. It is native to organically rich, moist, well-drained soils in part- to full-shade in the southeastern United States. It is a good choice for sun-dappled shade under large trees. It typically grows 8- to 12-inches tall and spreads slowly to form a dense carpet of matte blue-green leaves mottled with purple and white. The foliage will likely be tattered by mid-winter and will need some cleaning up in early spring. This will enable you to see the tiny off-white flowers at the base of the plants before the new leaves arrive. Use it for massing on banks or slopes or in native plant gardens. A tough plant, it will tolerate heavy shade and some drought. 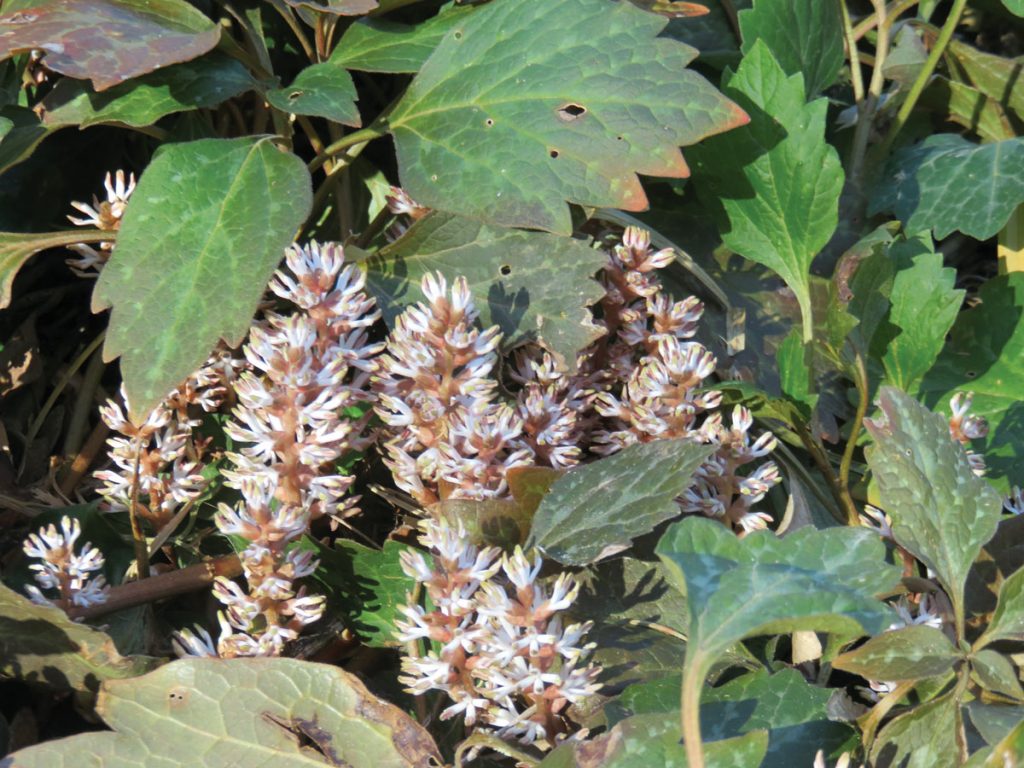 Selecting a grass for a shady area would probably not enter one’s mind but would contribute a contrasting texture to any of the above plants. I wrote about Hakonechloa macra, a shade-tolerant Japanese forest grass, not long ago. I must mention again that this grass will brighten up any place you site it, whether alone or in combination. The species is green, but look for the gold-striped cultivar ‘Aureola’. The dense-spreading clumps of graceful arching leaves are not aggressive and not browsed by deer. It is just right along paths and walks or on slopes. It’s also nice in a large container. Be forewarned! It’s also a “hot” plant and can be difficult to find. 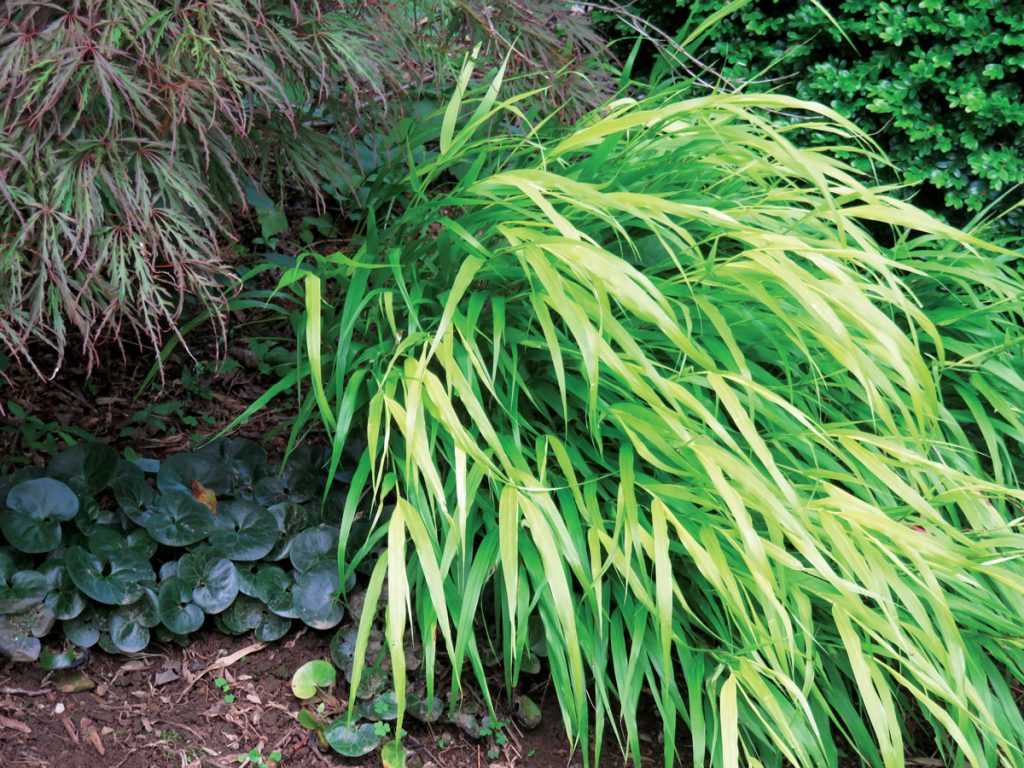 I’ve discussed my favorite deer-proof evergreen plant, Helleborus, the so-called Lenten Rose in several past columns. For an out-of-the-ordinary hellebore, consider Helleborus argutifolius Corsican hellebore. Grow it for its bold evergreen foliage, which is attractive all seasons, and the late-winter showy, petal-like, pale-green flowers in large clusters. The three-parted leaves are thick and spiny-toothed with blue-green to gray-green leaflets. This hellebore is also easily grown in moist, humusy, well-drained soils in part to full shade. Established plants tolerate periods of drought. The foliage will be tattered in harsh winters, particularly if not constantly insulated by snow cover. 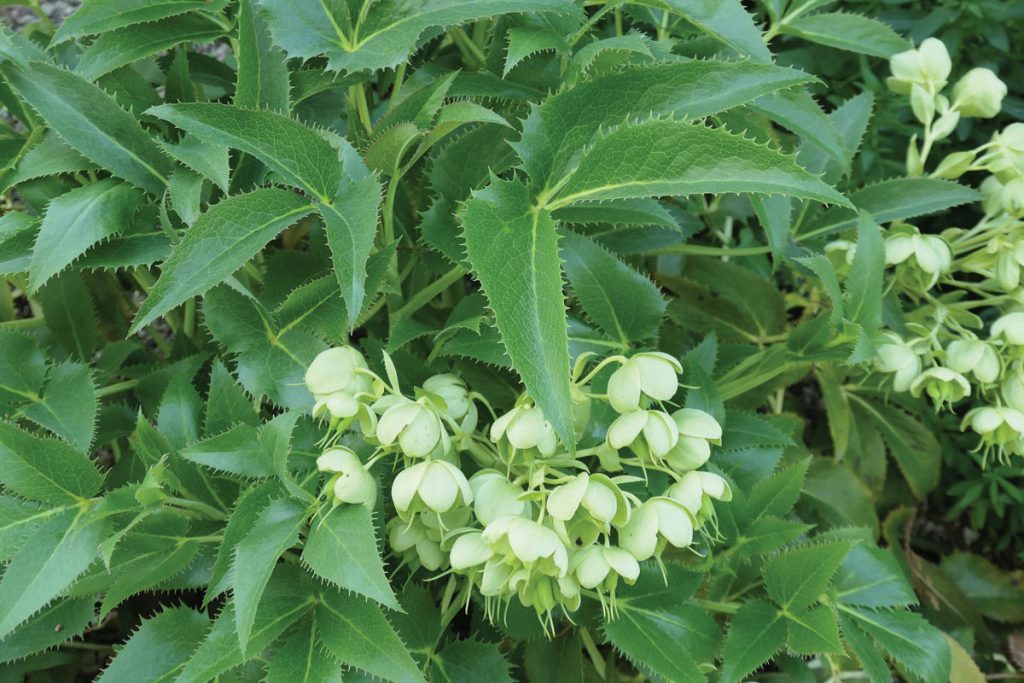 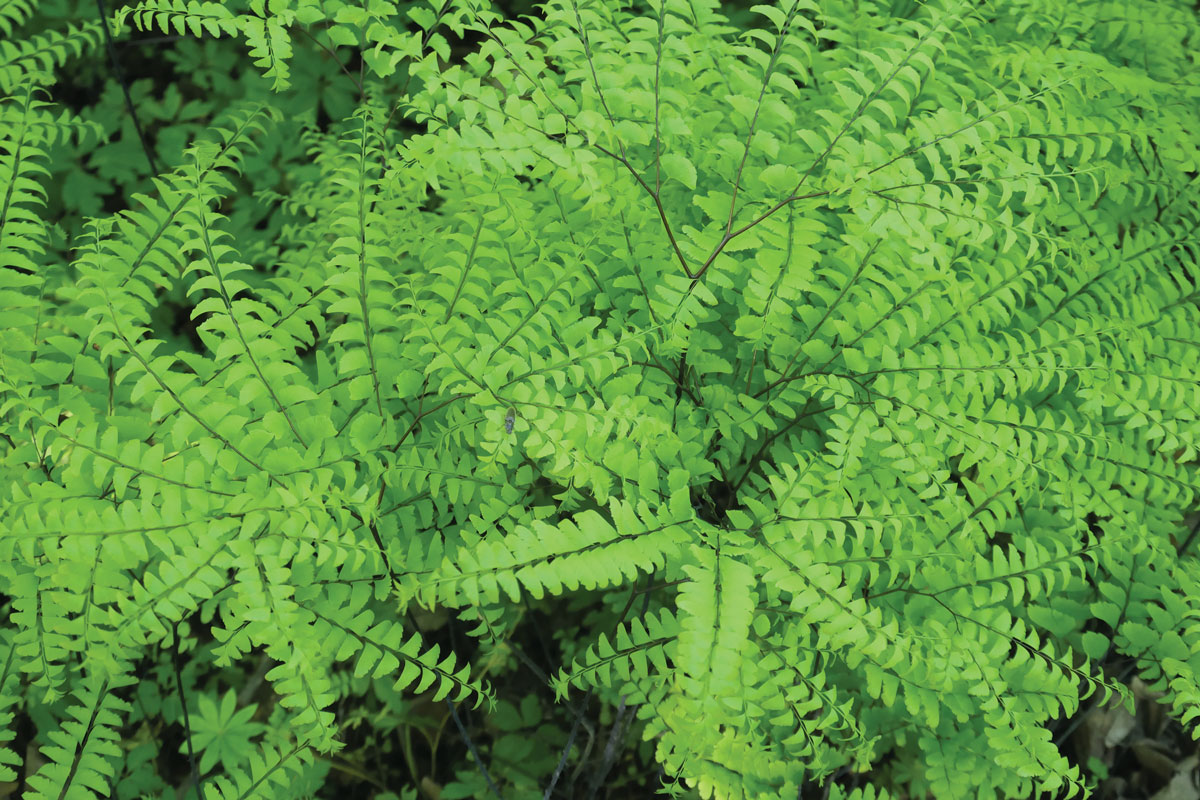