When competitors become collaborators, the results can be magical. That’s exactly what happened at this year’s Fulton Follies, an annual fundraiser for the Fulton Theatre.

Billed as a fun-filled variety show starring the Fulton’s artistic director, Marc Robin, board of trustee members, professional actors and local celebrities, Fulton Follies has traditionally stayed close to its own stage by showcasing the talents of actors from the Fulton’s current season’s repertoire.

This year was different.

“Lancaster has one of the most vibrant and collaborative arts communities of any I’ve worked in,” says Marc, who has staged more than 350 shows across the country during his career. “It seemed logical to follow the ‘Party on Prince Street’ theme and be sure that everyone was invited to the party.”

It may have been a revelation to the Fulton’s 300-plus patrons who attended the celebration, but Managing Director Aaron Young points out that Lancaster’s arts community is more interconnected than we might think. “We regularly share production resources like costumes, set pieces and technology between our theaters,” he notes. Directors, designers and actors often work in the productions of multiple arts organizations. “Administratively, we also work together to identify trends in ticket sales and contributions, as well as discuss audience reaction to specific titles. We also encourage our artists to support one another by doing reciprocal ticket trades so that casts at one production can see their colleagues on their day off.”

While all that cross-pollination has been going on, however, the public’s perception is “that we consider others who do what we do as competition,” Aaron continues. “We wanted to set the record straight by putting everyone together on the same stage so that we could publicly acknowledge our unity in creating art in this great community. I’ve often said that we don’t compete with other theaters; our competition is the couch. Anything that will get people off their couch and into the community to experience art together will benefit all of us, regardless of which theater or art gallery they go to. And, best of all, the community will benefit because even more people will be actively engaged in celebrating together.”

And celebrate they did. From a male quintet’s spirited version of the Star Spangled Banner to the inspiring One More Day from Prather Productions’ Dutch Apple Dinner Theatre’s production of Les Miserables, the arts community’s depth of talent and diversity were on display. At the emcee post was another Lancaster-born talent – Brad Rutter of Jeopardy! fame.

Represented were the Ephrata Playhouse, American Music Theatre, Rainbow Comedy Playhouse, PRiMA Theatre and Sight and Sound. Even the Willow Valley Tappers, ranging in age from 69 to 88, paid homage to the Grand Old Lady of Prince Street with a pom-pom studded tap routine.

Event co-chairs Liz Habecker and Mary Mattson always remember to keep the “fun” in the fundraiser. A live auction preceded the performances, and each auction item was unique to the Fulton Theatre’s ability to take the winning bidders to privileged places behind the footlights. From a trip to New York to witness a day of auditions with Marc Robin to an on-stage role in a future Fulton production, eager bidders vied for such one-of-a-kind experiences with gusto. Five downtown restaurants also got into the act by hosting pre-show dining for the Follies’ patrons.

While the Fulton Theatre is largely recognized as the crown jewel of Lancaster’s theatre arts community, its generous, inclusive approach showed the Follies’ audience that there are glittering cultural gems scattered throughout the county. Share the spotlight and all will brightly sparkle. 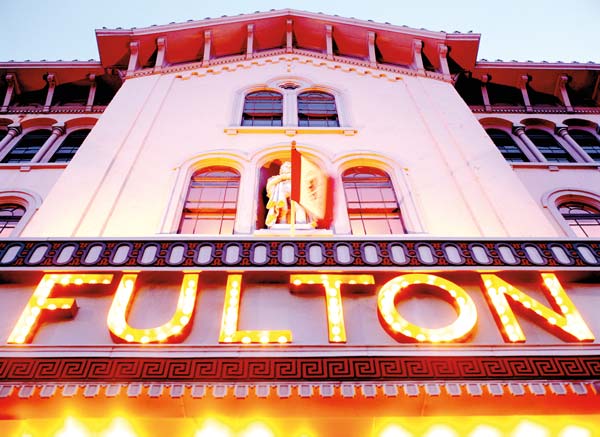