From West Africa’s Gulf of Guinea to the land down under, hip foodies, culinary perfectionists, and those just longing for a taste of home flock to Lancaster’s oases of international provisions. 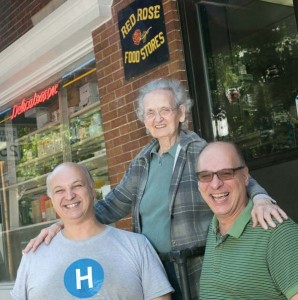 Like many kids growing up on the West End, I was often tasked to make a run to Mandros Imported Foods to fetch some rare ingredient for my mother – scribed on paper so I wouldn’t forget or mispronounce the item. As youngsters, we called this vestige of the old world the “stinky cheese store,” as much out of ignorance as out of truth Ω little noses often have a weaker tolerance.

Now, I know better. Opening the door to Mandros Imported Foods is like cracking the seal of a preserved portal to another world that’s bursting with bold scents, presenting ocular overload, and priming the salivary glands.
If you are looking for items like duck fat, stuffed grape leaves, Taramosalata (Greek-style caviar spread), or a number of other pickled, brined, or dried items, this is the place to start. The secret to Mandros’ 58 years of success is “selling a lot of stuff.” The most popular items Ω olives from the barrel, fresh parmigiano reggiano, and “real feta” Ω are always in demand, but the specialty items never sit on the shelves long either. 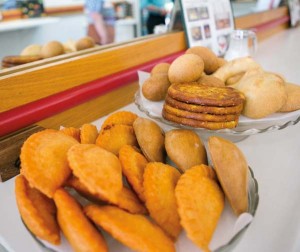 One of my most guilty pleasures whenever visiting the heart of the city is Super Bread Columbian Bakery. This nondescript storefront on North Queen Street is easy to pass without notice. There are no big signs, no lines out the door, just a relatively new curbside sandwich board detailing daily sandwich offerings. Now celebrating its 10th anniversary, I remember visiting the little shop when it first opened. The woman behind the counter kept apologizing for not having a deep fat fryer for her empanadas. So, she gave me a free soda. It was a nice gesture, nice enough to bring anyone back, but I soon realized I would come back for the breads Ω over and over.

My favorite is the mojicon, a traditional sweet roll in the shape of a donut filled with guava jelly. On the savory side, I opt for the pandebono, a bread traditionally made with corn flour, cassava starch, cheese and eggs.

Tucked into a strip mall next to a Domino’s sits Lancaster’s option for Middle Eastern groceries, Tabarek International Foods. Tabarek is more than food, as it also offers clothing, hookahs and household items. I was here to check out the food and found plenty of rice, seeds and beans. Lots of individual spices and mix packets also fill the spacious store.

Now I’m no stranger to SPAM, and I’ve had my fair share of questionable, canned meat products, but I was astounded by the giant 29.5 ounce tube of canned Chicken & Beef Luncheon Loaf. One of these days I’ll break down and try it Ω Andrew Zimmern style! In the freezers I found a good selection of kebab meat and intriguing sausages like makanek, a Lebanese beef sausage. Most of the items in Tabarek conform to Halal, meaning they are permissible for Muslims to eat or drink under Islamic law. 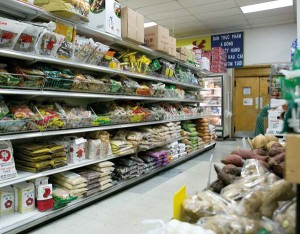 There may not be a Chinatown in Lancaster, but if there was, the epicenter would need to be Viet My Oriental Food Market (a.k.a. the Asian Market), the largest Asian grocery in the county. This place has everything you need when it comes to Asian food, whether it is industrial-sized bags of Golden Elephant brand Thai jasmine rice or fresh, exotic mushrooms. My advice for first time visitors is to get acquainted with the aisles that are filled with hundreds of items. Maybe treat yourself with a bit of kimchee or some fanciful candies.

Viet My is my source for authentic soy and fish sauce; there are dozens of brands to choose from. There is also a huge selection of items for vegetarians, including beef slices and soup bases. My vegetarian friends’ favorite is the Mun-Cha’i-Ya, or vegetarian roast duck; I’ve tried it, and it actually tastes pretty good.

I wandered into Afrodome African Market while researching my first Ethnic Eats column (May 2014). So, I made a return visit. Mostly unfamiliar with African food, I browsed the aisles of the small store trying to find the most unique items for sale.

Plantains I know about, but plantain fufu … I had to research this one. Evidently fufu is a staple food made from cassava flour. Fufu, usually served alongside groundnut (peanut) soup, is the national dish of Ghana. Afrodome also sells cream of palm fruits imported from Ghana.

A trip to Afrodome is an education. I’m still wondering what Original Tom Brown is even though it is described as “Anytime Porridge.” Another staple I am completely inexperienced with is the sourdough dumpling Ga Kenkey. I’ll need to ask for some instructions next time I stop in. 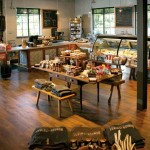 The Marketplace
at Hunger N Thirst

If you want the entire world (or most of it) in one place, stop in at The Marketplace at Hunger N Thirst. Attached to the contemporary eatery and beer-focused bottle shop, the marketplace offers everything from kitchen utensils to upscale snacks. I stopped in and ran into co-owner David Neff who was kind enough to give me a “tour” of the deli case.

“We have items from everywhere, especially the cheeses,” Dave reports. He points out fromage from France, Italy, Spain, Ireland, Switzerland, Canada and Holland. Being home to one of the best selections of brews around, of course Hunger N Thirst’s Marketplace carries Chimay ala Biere, a semi-firm cheese made with the world famous Trappist beer. The store carries marinated white beans from Greece, peppadews from South Africa, and fig jam from Croatia. Sitting alongside delicious hunks of prosciutto, serrano and soppressata stands a wedge of bresaola, a lean, cured, grass-fed beef from Uruguay. Dave reports a customer comes in often to purchase a pound to make creamed chipped beef. Now, that is decadent!