Fifty years ago, magic happened in Lititz. Two brothers took their interest in tinkering with audio speakers and their enjoyment of working together and made themselves a hobby, a passion and eventually a business – Clair Brothers Audio.

Say those three words in the circles of rock superstars and their tour managers, and you get an immediate recognition of respect and even reverence for the founders, brothers Roy and Gene Clair. What their technological innovations in a Lititz garage have created is awesome: two international businesses devoted to serving the audio needs of some of the world’s finest performance venues, concert tours, houses of worship and even cruise ships.

Fifty years later, magic is still happening. The original Clair Brothers Audio has evolved into two separate companies – Clair Global, headquartered in Lititz, is headed by the late Gene Clair’s son, Troy. The other original “Clair brother,” Roy, is CEO of Clair Companies of Manheim. The two CEOs teamed up to mark their 50th year of audio innovation with a party – meant to express a big thank-you to the hundreds of current and past employees and friends who made possible the meteoric growth and success of Clair Brothers. What better night to celebrate than New Year’s Eve, when the stroke of midnight ushered in their 50th year in business.

The celebration was held at Rock Lititz, a rehearsal facility for the live entertainment industry, established to enhance the services provided by Clair Global and other area touring and entertainment-related businesses. With 52,000 square feet of space, there was plenty of room for the eight food trucks that were on hand to provide a variety of party fare to fuel the revelers well past midnight.

The invitation encouraged guests to wear their vintage rock star swag – T-shirts, jumpsuits, jackets and other memorabilia from the various concert tours they worked. Clair family members created a “walk down memory lane” of past swag from the Clair companies’ collections of clothing, displayed on mannequins placed throughout the party space.

As with the thousands of shows that the companies have set up over the past 50 years, the staging, lighting and audio, of course, were top-shelf, professional grade. Clair Global senior director of systems development, Harry Witz, who has produced concert tours for AC/DC and has engineered sound for scores of other rockers, oversaw the design and production management of suspended lighting trusses, the sound system, staging, and visual components from compadre businesses Atomic Design, Atomic Lighting, and Stray Lighting.  A video wall was assembled to show concert footage from some of Clair’s clients over the years, as a live band performed throughout the night. Haze – the fog that makes spotlight beams visible – was blown into the air for hours, as 1,500 gold and silver balloons were suspended 100 feet overhead to be dropped over the crowd of 700 at the stroke of midnight.

Guests flowed into the modernistic facility, its entrance awash in blue spotlights and the logos of the two Clair companies shining brightly on the building’s 100-foot façade.  Many were dressed in the code of the evening, from red jumpsuits harkening back to Elton John’s 1974 tour to vintage Rolling Stones tour jackets that would no doubt command a pretty sum among collectors of rock memorabilia.

At 11 p.m., the magic moment occurred: Troy Clair took the stage for a heartfelt thank-you to employees spanning nearly five decades. “We have not gotten to where we are alone,” said Troy. “It took a village, and you are all here because you are a part of it.” He shared a video that featured employees reminiscing about the first 10 years of Clair Brothers, photos of 70s funky fashions and hair, while simultaneously showing the impressive growth in size, technology and sophistication of the business.

Roy Clair followed with his own observation, “When my brother and I were young, we had but one goal and that was to work together, and I think we accomplished that.” He continued by recalling one of the favorite parts of his job with the first client, Frankie Valli and the Four Seasons, who gave the Clair brothers their first gig at Franklin & Marshall College that changed everything, launching the brothers into the concert touring industry. “When we toured with Frankie and the Four Seasons, I used to introduce them and bring them on stage,” he remembered. “And so, for one more time in my life, may I present – the West Coast cast of Jersey Boys!”

Yes, an already over-the-top party just got even better. The big surprise of the night, the Jersey Boys, took the stage in blazing red sport coats, 60s slicked hair, impeccable choreography and the hallmark harmonies of the famous quartet that started it all for the Clair brothers.

It was minutes before midnight, and the band reclaimed the stage as the Jersey Boys took their bows. As they played The Heart of Rock ‘n Roll, (not only a great song, but a tag line for Clair Brothers Audio), long-time Clair employee Gene Pelland joined the band to sing lead vocal and play a harmonica Huey Lewis-style. It was the song that led the crowd into the 10-second countdown to midnight, when, amid confetti, balloons, kisses and champagne, the Clair families began their 50th year of a Lititz legacy. 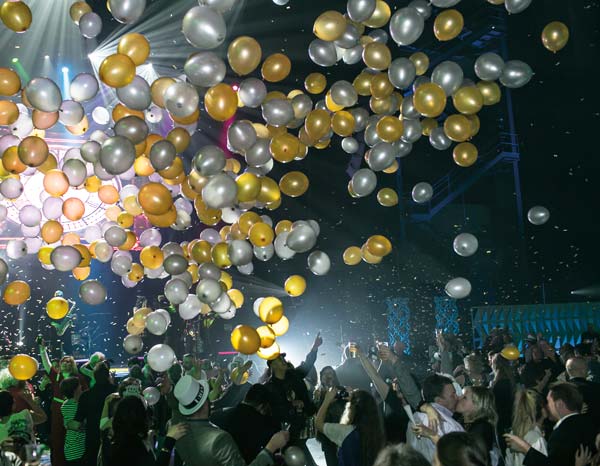 As the clock struck midnight, 1,500 balloons descended from the ceiling.