Barbecue: The Fat is Where it’s At
Search
September 20-22

The fairgrounds of the Solanco Fair Association are located off Route 472 and Park Avenue in Quarryville.

In the spring of 1950, Edna Groff approached Sadie Greenleaf, who was the president of County Farm Women, with an idea to hold a fair in the Southern End of the county. In May individuals from six organizations representing farm women met at the fire hall in Quarryville to explore Groff’s idea. The women were excited at the prospect of holding a fair and proposed to move forward with the project. Greenleaf contacted the county agent, the principal of Solanco High School (as well as the chair of the school’s agriculture department), local banks and service organizations to gauge their level of interest. A June meeting brought the interested parties together. The fair was a go! Thanks to the volunteer effort, a fair was scheduled to take place that September. Jerome H. Rhoads offered the use of his property for the livestock shows and other events, while the fire department and downtown businesses donated their buildings for displays and exhibits.

The Southern Lancaster County Fair Association was off and running. Solanco was – and remains – decidedly different than other area fairs as its bylaws stipulate that gambling, concessions and a carnival atmosphere are not permitted. The sole intent was to foster a community event that honors agriculture, the talents of its residents, local businesses and community.

The plan worked beautifully; through the decades, the Solanco Fair has grown by leaps and bounds. By 1966 the popularity of the fair prompted it to move to Legion Park. The purchase of 5 acres on the edge of the park allowed for the association to build its first permanent building, which was named in honor of dedicated volunteers John C. Hoffman and his wife, Sara. In 1982 another 19 acres were purchased. Over the years, several more permanent buildings have been constructed, including a show barn, a pole building for livestock, a large show ring (with seating) and another building that promotes the dairy industry.

So, without the allure of a Midway, what’s there to do? Plenty! Livestock shows are highly competitive. The buildings are filled with exhibits that range from arts & crafts to floral arrangements. The bounty from area gardens is also on display. Area bakers go to battle at this fair, as it offers the opportunity to go to the Pennsylvania Farm Show thanks to the Blue Ribbon Apple Pie, PA Incredible Angel Food and PA Preferred Chocolate contests.

Tradition is also a cornerstone of the fair. The parade, which dates to 1952, is always held on Wednesday night of fair week. This year’s theme is Country Scene – Blue Ribbon Dreams. The Baby Parade is also popular. Tractor (antique and classic) pulls also dot the schedule as does a pedal tractor pull for youngsters. There’s also an Iron Man contest, and celebs are in the house for a milking contest. However, the most eagerly anticipated event is probably the Tug-of-War competition among local fire companies. The winner earns $500.

The Solanco Fair is a food-lover’s paradise. The Quarryville Lions Club’s French fries, which made their debut in 1957, are legendary. The fair’s Dairy Bar, which dates to 1960, is known far and wide for its milkshakes. Other civic organizations are on hand to tempt visitors with their own house specialties; proceeds help to fund charitable projects in the community. Hess’s Barbecue is the only commercial business that is on the premises. 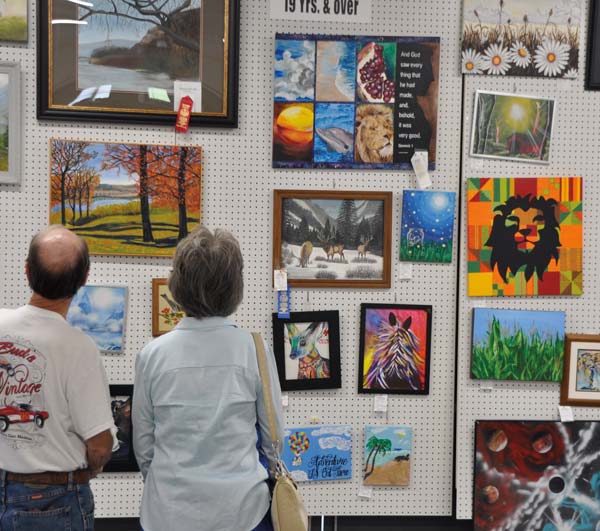