JoBoy’s Brew Pub has settled into its new home in Lititz’s Rudy Hall. “Our restaurant is a destination,” says owner Jeff Harless. “So, we fit right in with Lititz, which is also a destination.”

In 2009 Jeff and his wife Maria “Jo” opened their restaurant and craft brewery in Manheim’s historic Summy House. After a few years, they were faced with good/bad news: They had outgrown the space. Unable to find a suitable location in Manheim, they expanded their search to neighboring communities and found the Rudy’s Hall building, which over the years, had served as a store, funeral home, town hall and tea room.

After undergoing carefully planned renovations that were designed by Jeff and Jo, JoBoy’s reopened on July 4, 2014. “We took our cues from Rudy Hall’s history – the setting is pre-Prohibition,” Jeff explains, “We wanted a classy but casual environment.” They more than succeeded. The wood floors, partially exposed brick walls (adorned with the tops of wine barrels from two of the featured wineries), sepia photos, and metal artwork (depicting musicians and playful versions of the restaurant’s logo crafted by local artisan Jim Glick) add a pop of pizazz to the space.

The bar top features JoBoy’s logo – stick figures of a boy and girl holding mugs of beer (the logo has a history of its own: Jeff would include the drawing on notes he left for Jo during their courting days). Booths line one wall and constitute the center seating area. “The back of the booths in the center area are a bit higher to promote privacy. That area seats 20 and doubles as a private area for small groups,” Jeff explains.

The other side of the dining area features table seating with a view of the action in the craft brewery. “Tables in that area are pretty popular – people like to watch what’s going on in the microbrewery,” Jeff notes.

As for the menu, the focus is on the Southern-style barbecue that North Carolina native Jeff grew up eating and for which JoBoy’s has become known. The Southern theme winds its way through the menu and includes appetizers such as smoked cabbage and smoked wings; sides such as Carolina red slaw, collard greens, hush puppies and fried okra; entrees such as shrimp & grits; and for dessert, sweet potato pie. If you’re not craving a taste of the South, the menu also features traditional soups, seafood salads, a crab cake sandwich, burgers and other entrées such as salmon and hand-cut Delmonico steak. The menu recently expanded to include what Jeff calls “more healthy choices,” including some vegetarian items and a wider sandwich variety.

Brewmaster Kevin Shaw presides over the microbrewery, which can also be viewed from the street. It features four tanks that are able to brew about 450 gallons of beer at a time. JoBoy’s hand-crafted selections include both year-round and seasonal brews. Jeff reports that the top seller is Lititz Springs Lager; seasonal beers for the summer will include lighter styles such as German Kolsch and Witbier.

If your taste is for wine, you’ll find something to your liking. The restaurant features local wines from Waltz Vineyards (Manheim), The Vineyard at Grandview (Mount Joy) and Karamoor Winery (Fort Washington).

Joboy’s also offers an events venue on the second floor. Soaring ceilings, windows overlooking Main Street and original wood flooring dating to 1902 are hallmarks of this area. It also features its own bar and seats 150 to 175 people. As one would expect, the menu focuses on barbecue-related items, but as with the restaurant menu, there are other items available as well. Jeff credits General Manager Jennifer Thompson for the popularity of this event space.

By the end of summer, Jeff anticipates opening a retail space in the lower level of the building. There, customers will be able to purchase JoBoy’s barbecue sauce and rubs, six-packs of JoBoy’s brew, growler refills and merchandise such as T-shirts and hats.

Barbecue fans may also want to check out: 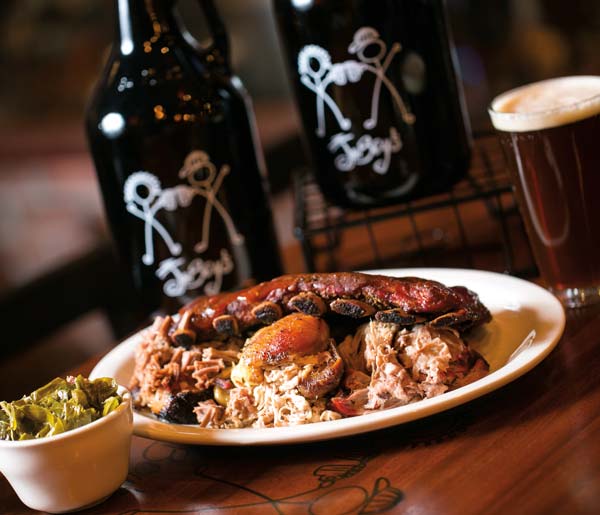 JoBoy’s Sampler for Two includes brisket, chicken, pulled pork, a half rack of ribs and a choice of four sides. Hand-crafted beer is made on the premises; selections include both year-round and seasonal brews (Lititz Springs Lager is a customer favorite).