This has been a banner year for husband-and-wife restaurateurs, Dave Zahm and Sherry Landis. Not only is Bully’s Restaurant & Pub celebrating its 15th anniversary, but the Inn at Bully’s is also celebrating more than five years in business. “Fifteen years went by so fast,” Dave observes.

Built in 1903 by A.G. Beattie, the building – originally known as the Union Hotel – served as a hotel-tavern for railroad and mill workers. According to owner Dave Zahm, the present-day building is 90% original. The bar and the chestnut/walnut/ oak back bar were hand-carved expressly for the Union Hotel by the planing mill owned by William Wohlsen of Lancaster City. The Victorian era-inspired décor also features a stained-and-beveled-glass entry door, black-and-white tiled floor, an exposed brick wall and an ornate tin ceiling that was installed when the building was renovated in 1987 by previous owners.

After a fire – started by a wayward firework – ravished the third floor of the hotel, renovations made by Dave and Sherry to the façade of the historic hotel were recognized by the Historic Preservation Trust of Lancaster County (C. Emlen Urban Award) in 2010. In creating the upper level Inn, Dave utilized his cabinetmaking skills and knowledge of construction while Sherry contributed her interior design talent.

Dave is not only proud of the milestones and accolades, but also of the fact that customers and the local community appreciate the attention to detail and service that Bully’s provides. “The Inn has really taken off. We offer the personal service and unique atmosphere that people who stay at inns and B&Bs are looking for,” he says, adding that a number of the Inn’s guests are referred by local businesses. Some are corporate clients while other guests may be students at the nearby National Watch & Clock Museum’s workshops. Still others may be cyclists using the nearby river trails. Visitors from outside the area, who are patronizing Columbia’s growing number of antiques shops, are also discovering the Inn. Dave says there’s also been an uptick in local residents indulging in staycations.

Dave notes the restaurant has undergone some personnel changes this year. Dave’s son, Adam, who had been the chef at Bully’s almost since the family came to own the casual dining establishment in 2000, switched careers in the spring in order to spend more time with his family. Therefore, a new chef, Robert Schoelkolf – who’s known to his friends as Chef Bobby – has joined the staff. Chef Bobby, who is a Columbia native and a graduate of Johnson & Wales, has ties to Bully’s; as a Columbia High School senior, he “shadowed” Adam.

“Adam and I worked really well together, so it was different not having him here,” Dave admits. “But Chef Bobby has brought his own brand of enthusiasm to the restaurant,” which Dave describes as “a destination restaurant – people come for the ambiance, consistency of the food and the historic building.”

Chef Bobby not only creates specials to augment menu items – which range from burgers to beef, fowl, pasta and seafood – but a number of the sauces he’s created utilize beer from Bully’s famed Beer Bible. He’s also offering several flavors of homemade ice cream that change daily. Dave says that like the sauces, some of the ice cream flavors are infused with beer; a recent example is ice cream made with Small Town Brewery’s “Not Your Father’s Root Beer.”

Bully’s beer bible, which offers a brief description of the brewing process, ingredients, beer terms and a glossary, as well as a listing of Bully’s beers, is also evolving. Updated about every 18 months, it was rewritten earlier this year. Dave says that at any given time – in addition to the 11 beers on tap – Bully’s has about 250 different bottled beers on the menu, most of which are craft brews. Some are year-round items, while others are seasonal and “limited edition” craft brews, as well as those offered in a cellar sale. “My focus is to offer the best selection of beer possible,” he says.

Bully’s also boasts a well-stocked bar that includes an extensive wine list and fine spirits. There are also a number of seasonal signature drinks available.

Bully’s Restaurant & Pub is located at 647 Union Street in Columbia. Dining hours are Monday-Thursday, 4-10 p.m. (kitchen open until 9 p.m.), and Friday-Saturday, 4 p.m.-close (kitchen open until 10 p.m.) Closed Sunday. Reservations are suggested for large groups and weekend dining. Bully’s is available for private events during lunch or on Sunday by reservation only. Call 684-2854 or visit bullys-restaurant.com.

Other destinations perfect for celebrating the “holiday spirit” include:

■ Pour, 114 North Prince Street, Lancaster. Located along Gallery Row, the focus of this cosmopolitan restaurant is glass-poured wine, an extensive wine list and high-end spirits. There are 12 different draft brews and about 50 craft (bottled) brews on Pour’s rotating beer list. The menu features a variety of small plate items (as well as plates to share) and charcuterie. Call 290-8080 or visit pouronprince.com.

■ The Railroad House Inn, 280 West Front Street, Marietta. This landmark restaurant and inn reopened in January under the ownership of Joey Bowden and Freddy States. The main level features three dining areas, while the lower level, which reopened in October as the Perry Street Cellar, boasts a speakeasy/pub vibe offering pub fare and “hard-to-find” craft brews. There are 12 crafts on draft; 60 craft brews are offered in bottles. The wine list features about 50 bottles. A gin-based drink called the River Flame is the signature drink. The cellar features a small dance floor and stage; live entertainment is planned for the future. Call 426-4141 or visit railroadhouseinn.com. 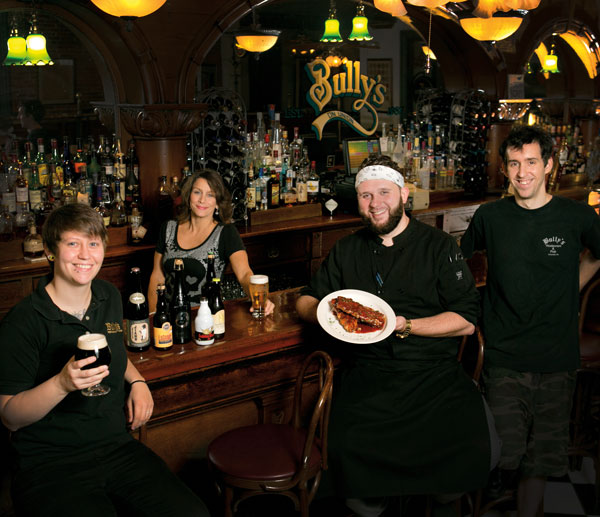