This quaint, off-the-beaten-path village that’s a stone’s throw from the Susquehanna is home to people who are passionate about historic preservation and gardening. It seems there isn’t a property in Maytown that’s not in bloom!

Appropriately enough, Maytown was officially founded on May 1, 1760. On that day, Jacob and Elizabeth Downer, German Mennonite land speculators who arrived in Eastern Lancaster County and made their way west, laid out the proposed town on 150 acres they had purchased from Lazarus Lowery, a trader who was one of that area’s original settlers, having received a patent for 411 acres of land in 1748.

It was the Downers’ plan to create a frontier town that welcomed newcomers and served as a supply center for those heading west. Their dream was realized: Scots-Irish and German immigrants gravitated to the town, which quickly became a thriving center for fur trading. Later, it became known for its muskets (Daniel Gilman manufactured them during the American Revolution), cigar factories and brick-making enterprises. Maytown has a famous son, as well: Simon Cameron, who served as a diplomat, U.S. Senator and Abraham Lincoln’s Secretary of War, was born there in 1799.

Today, Maytown stands as a testament to time. At least 25 of the village’s earliest log structures are still in existence, while its Victorian architecture pays homage to the 19th century. Honoring the past is due in part to the work of the Maytown Historical Society, which was founded in 1985 to oversee the town’s 225th anniversary celebration, after which its members became involved in collecting local artifacts and recording historical data that relates to the area. In 2002, the organization realized a dream of its own with the opening of the Maytown/East Donegal Museum, which makes its home in what may be the longest-surviving structure in Maytown, as it is estimated to be over 250 years old.

The New Kids on the Block

Carol Eddins and Susan Corridon, twin sisters who have roots in Pennsylvania but lived most of their adult lives in the D.C. suburbs of Silver Spring and Laurel, Maryland, had retired and were looking to relocate where they could experience life in the slow lane. One day a house in Maytown popped up on Susan’s computer screen. She shared it with Carol. “I was familiar with Lancaster County through sightseeing trips I had made,” notes Carol, who is retired from the U.S. Postal Service. “I liked the area.” She deemed a scouting trip was in order. “I walked in and immediately made an offer,” she recalls. Built in 1856, the house served as a parsonage for the Church of God for approximately 15 years. It then became a private home. The last owner remodeled and refurbished the house, making it move-in ready.

Like many properties in Maytown, Carol and Susan’s home is backed by an alley. At one time there was probably a small barn or stable on the property and, of course, a garden. The barn was long gone, having been replaced by a shed. The garden was nonexistent. “The grounds were pretty much a mess,” says Carol. “We removed a pool and took out truckloads of junk.”

Once that was accomplished, the sisters had a blank canvas with which to work. “We just started to cut out gardens,” Susan says of their quest to beautify the grounds. Susan, who was employed as a floral manager for the grocery chain Safeway, laughs and says her earnings from her part-time job in the garden center at J.B. Hostetter’s in Mount Joy were immediately returned to her employer, as she spent most of it on plants and other gardening needs. Susan likes to mix it up as far as plants go. “I really like color,” she notes, adding she’s not afraid to experiment and move plants around until she finds the perfect environment for each one.  She’s especially enjoying the succulent craze, pointing out they’re perfect for containers, as they add subtle color and wonderful textures to a landscape yet require little care.

Carol is equally as creative, only her talents lean more in the direction of garden art. She often recycles finds and transforms them into art. Thanks to her finds, many of the gardens tell a story. Both are amazed by the variety of garden centers that exist in Lancaster County and love to explore the small stands and greenhouses that dot the backroads. The also love to explore the antiques venues in Columbia.

The two also eyed the shed in the backyard and aimed to turn it into a “she shed,” which is the female version of a man cave. (“Who wants to hibernate in a cave when you can enjoy sunshine and fresh air” is the philosophy behind this getaway for women, which is also called a “Femme Den” by Houzz.com.) The sisters called upon their brother to make it more inviting. Suggesting they finish the interior, he ultimately lined the walls and ceiling with wood he salvaged from fallen trees. French doors and windows admit plenty of fresh air and natural light. Comfortable furniture, collectibles and family photos fill the space. “It’s our little getaway,” says Carol.

Yet another shed sits at the rear of the yard. “It was a surprise for Susan,” Carol says. “We saw them at the Pennsylvania Garden Show of York,” she says of the designs that are the handiwork of Steve Bupp, co-owner of Cross Creek Farm in Glen Rock (York County), and whose expertise ranges from rustic to Williamsburg and everything in between. The multitasking Cross Creek shed provides storage space and a scenic front-porch view of the gardens; also, in the back, a potting table is attached.”

The sisters also replaced the sidewalk at the front of their house with brick and carried it through the side yard. M&M Masonry, who repointed the brick façade of their home, helped them with that project. Last fall, the sisters tackled the job of replacing the expansive deck that juts off the back of the house. “We’d like to put a pergola over it,” Carol reports.

Moving from the D.C. area provided quite the culture shock for the sisters. “We tell our friends that we live in a town that doesn’t even have a traffic light,” Carol says, adding she appreciates the quietude the town offers. “It’s very peaceful,” Susan adds. Now, birds singing and church bells ringing are music to their ears. “I also like to hear the sound of a horse and buggy coming through town, as well as the train whistle in the distance,” Carol remarks, adding that on one of their first nights in the house, Christmas carolers serenaded them from the sidewalk. “People are very friendly and are always offering their help,” she reports.

Last year, the sisters gave back in their own way by holding a plant sale at their home as part of the Maytown Historical Society’s Garden Tour. “We potted a lot of them, and Bob Lauver donated a lot of his plants, especially hosta,” Susan says of the sale, which netted over $1,000 for the organization.

Spend the day in Maytown, where up to nine gardens will be on view. A plant sale will be held at Carol and Susan’s home (300+ plants, notably perennials). The museum will host a seminar/presentation by Wes Gerber, owner of River Road Produce & Garden Center, who will discuss how variety can be added to gardenscapes. Food and refreshments will be served on the grounds of the historical society/museum. All proceeds will benefit the Maytown Historical Society. Advance tickets are $10; $12 on the day of the tour. For information, call 426-2360 or visit maytownhistory.org. 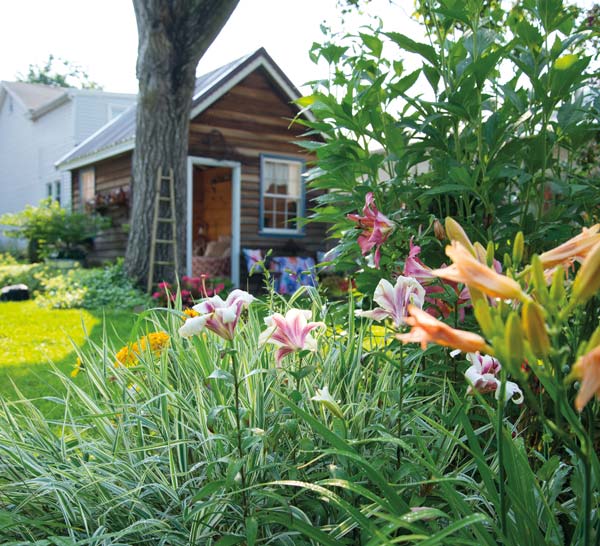 Perennials set the tone in the gardens that define the backyard.