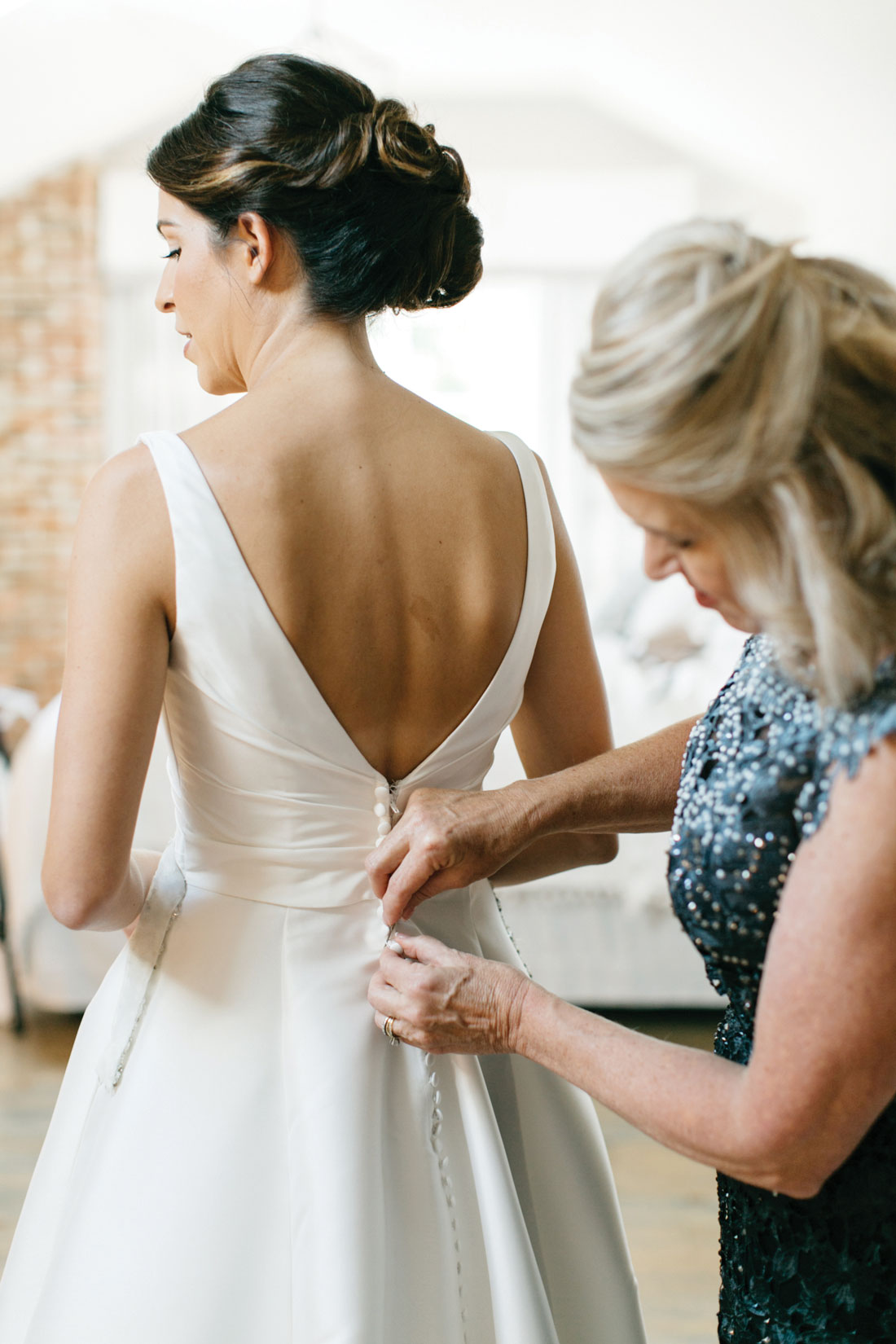 One of the wedding day moments Kim Roche treasured was helping her daughter dress for the ceremony.

With all eyes on the bride and groom, the parents of the betrothed couple are sometimes wedding day footnotes. But, their personal moments of joy, awe and overwhelming love are equally poignant.

Kim Roche recalls the moment she saw her daughter Stephanie in what would be chosen as her wedding gown. “A group of her besties and I were invited to shop with her. We would comment, ‘Oh, that’s pretty,’ or say something nice about each dress,” Kim remembers. “But, when she entered the room in the dress, we were completely silent. There were no words.” 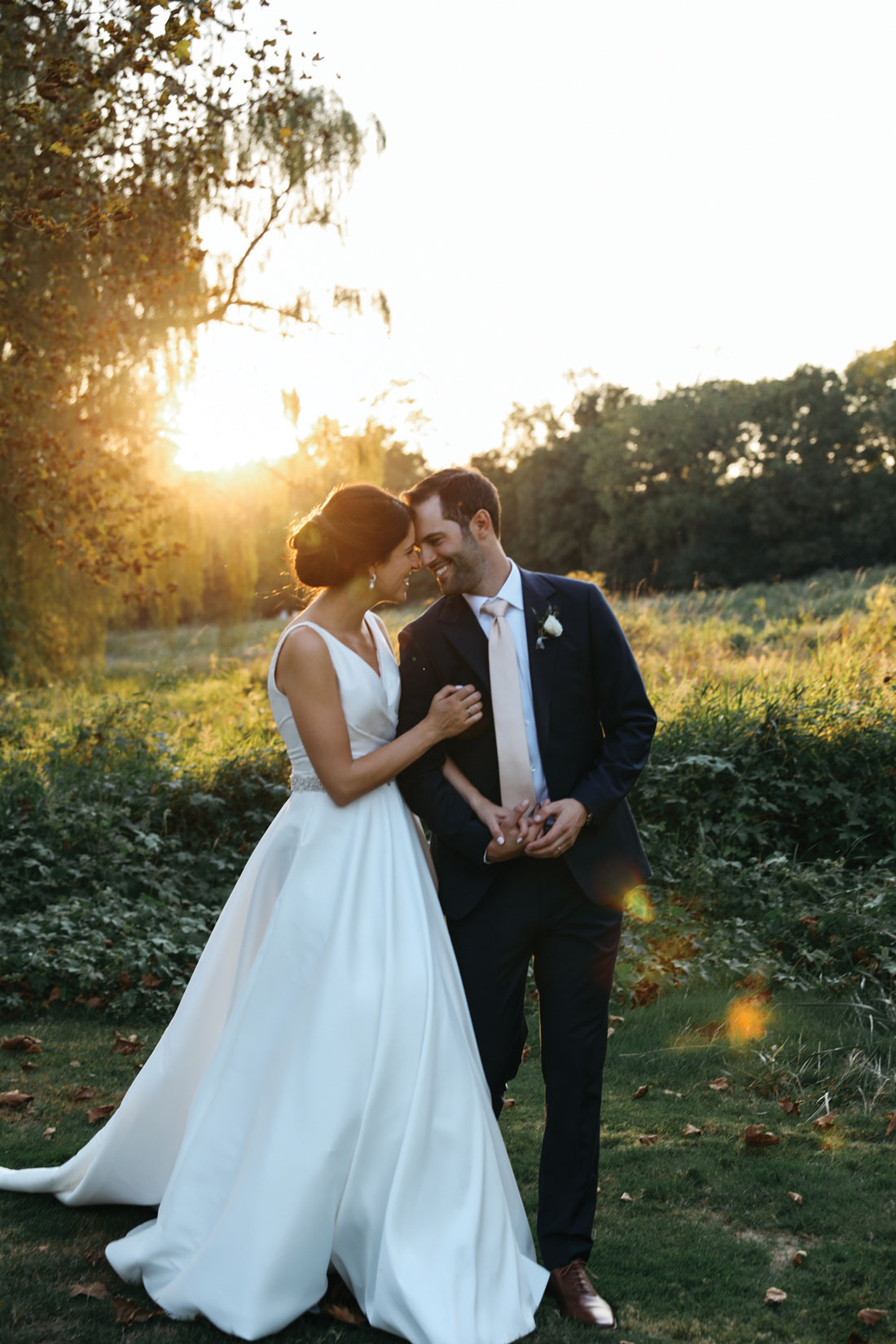 While Stephanie and Mike were being photographed in the picturesque environs of the Lancaster Country Club, guests used the two-hour break to explore downtown Lancaster’s fun spots.

Stevie, as she is known to her family and friends, and her groom, Mike Griffin, are Boston-based, but 29-year-old Stevie had spent much of her life in Lancaster, having graduated from Lancaster Catholic High School. Her mother, Kim, and stepfather, WGAL News8 anchor Brian Roche, are long-time Lancaster residents, so it was natural to come home to create a ceremony at Historic St. Mary’s Catholic Church in downtown Lancaster, a reception at Lancaster Country Club and rehearsal dinner at the Hamilton Club. 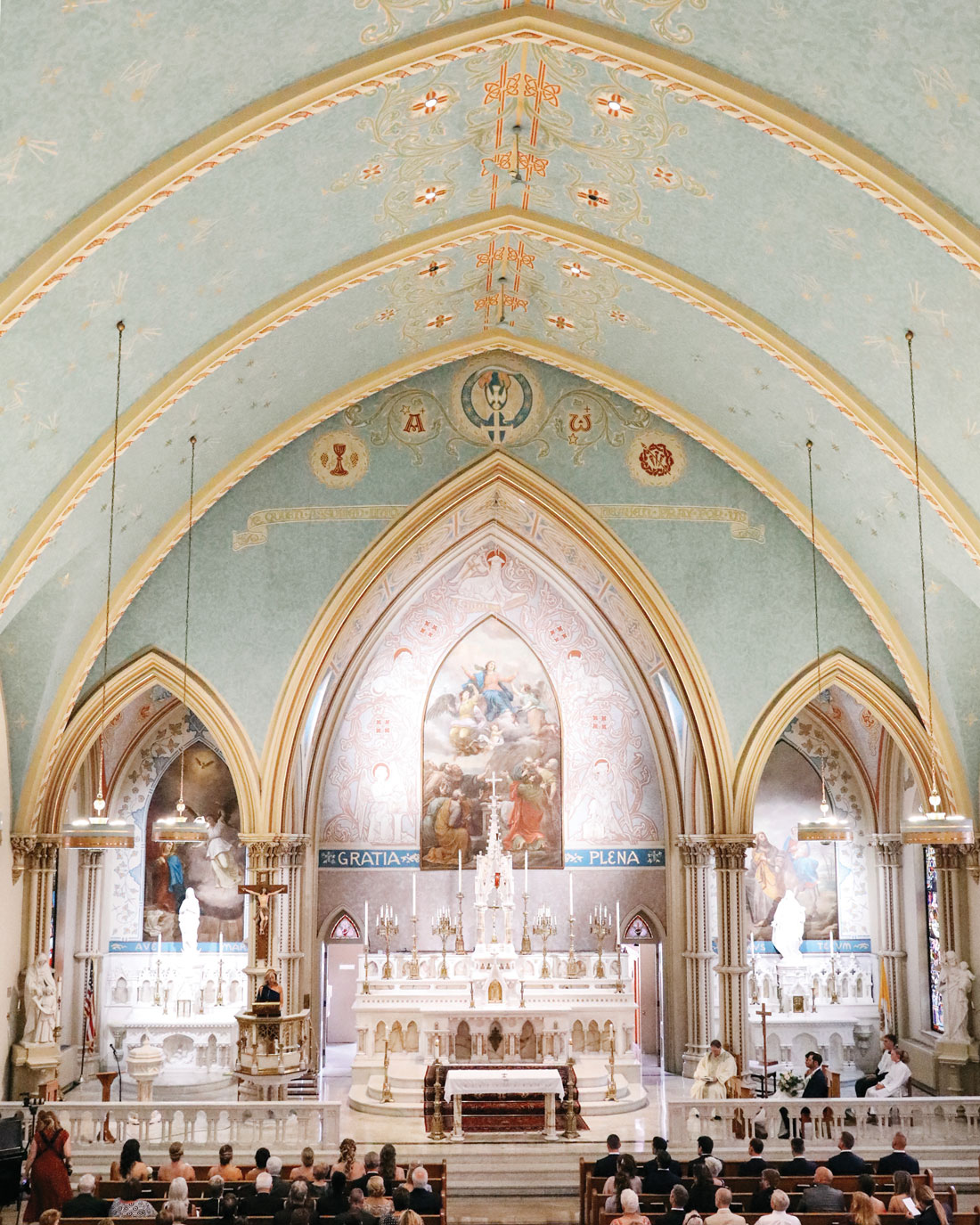 Historic St. Mary’s Catholic Church, which was the site of the wedding, is so elegant that flowers were unnecessary.

For the groom’s family and friends, the September 21 event was a destination wedding that also showcased some of the best of Lancaster. “Guests raved about how impressed they were with Lancaster,” Kim says. “They explored Central Market and downtown’s cool coffee shops, took drives into the Amish-populated countryside and enjoyed the views at The Exchange. Some extended their weekend to travel to Gettysburg, Annapolis and Washington, D.C.” 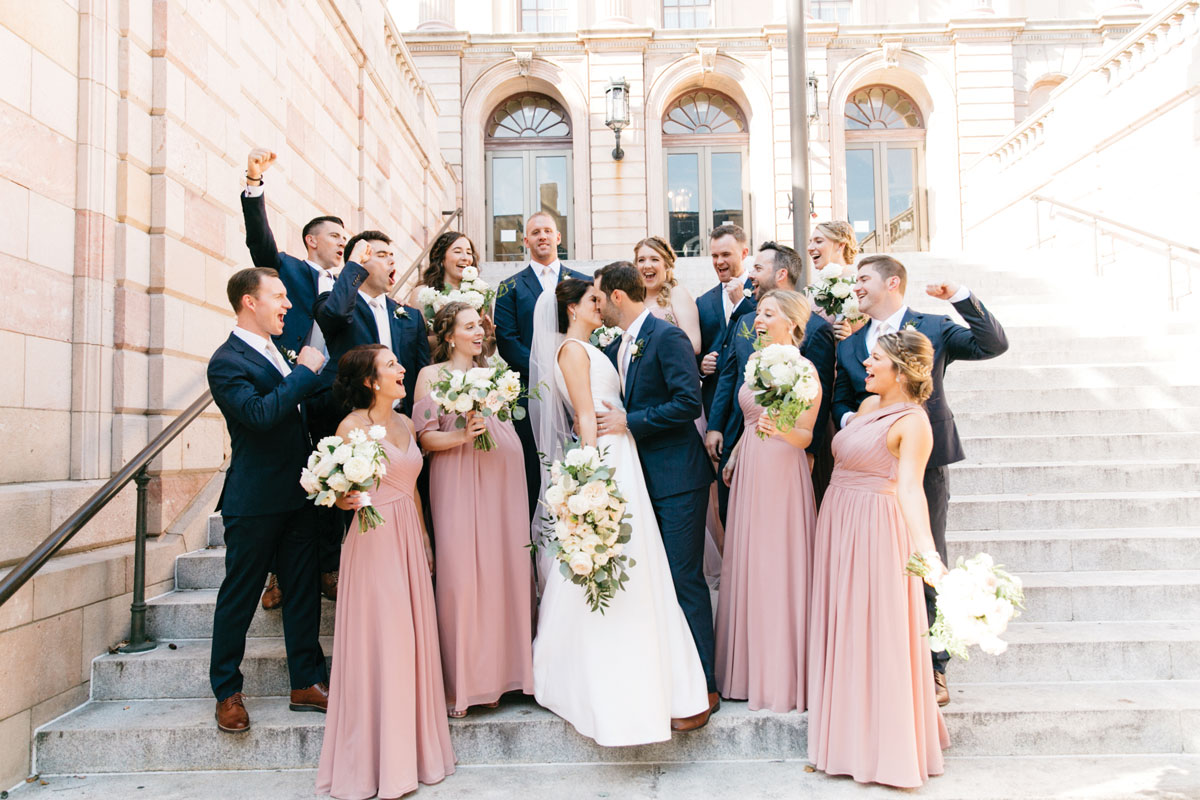 The couple’s seven bridesmaids and seven groomsmen (including two best men and two matrons of honor) joined them for photos on the steps of the old courthouse building.

The day before the wedding, Brian organized 24 of the guys to play golf on the iconic course at Lancaster Country Club, while the ladies were entertained with lunch at Sugarplums & Tea. Following the couple’s 73-guest rehearsal dinner, the groom’s parents threw a party for 150 out-of-town-guests the night before the wedding. Kim loved the result, explaining, “It took the pressure off the bride and groom having to visit every guest table at the reception, so that became a fabulous dance party!” 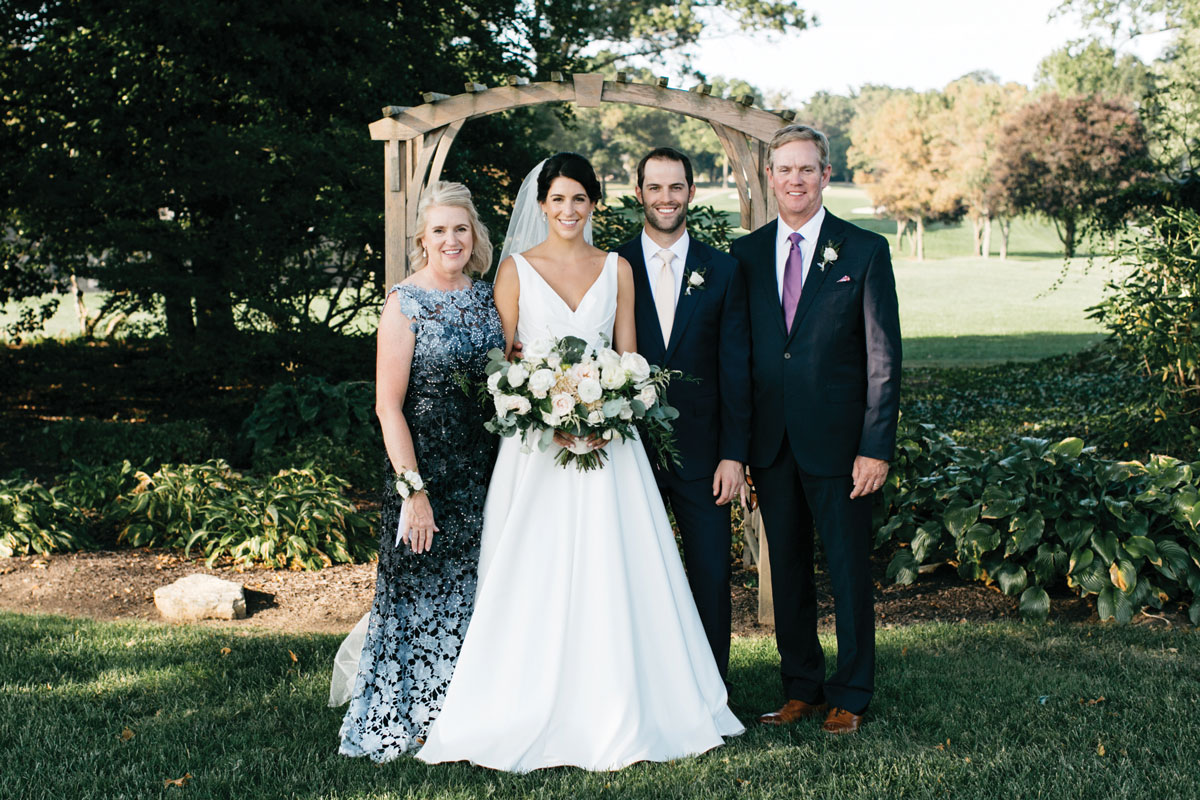 Kim Roche, daughter Stephanie and her husband Mike Griffin, and Kim’s husband, Brian Roche. As the hostess of the party – the reception – every mother of the bride deserves to have her own aisle style! Kim chose a non-traditional MOB look in navy ombre, lace and textural sparkle. While Brian offered a reading during the ceremony, he felt his role of the day was to “take care of the mother of the bride.”

A blended family, Kim and Brian’s adult sons and daughters have embraced each other as brothers and sisters. “It’s touching to hear how our children talk to each other and reach out to each other on their own,” says Kim. 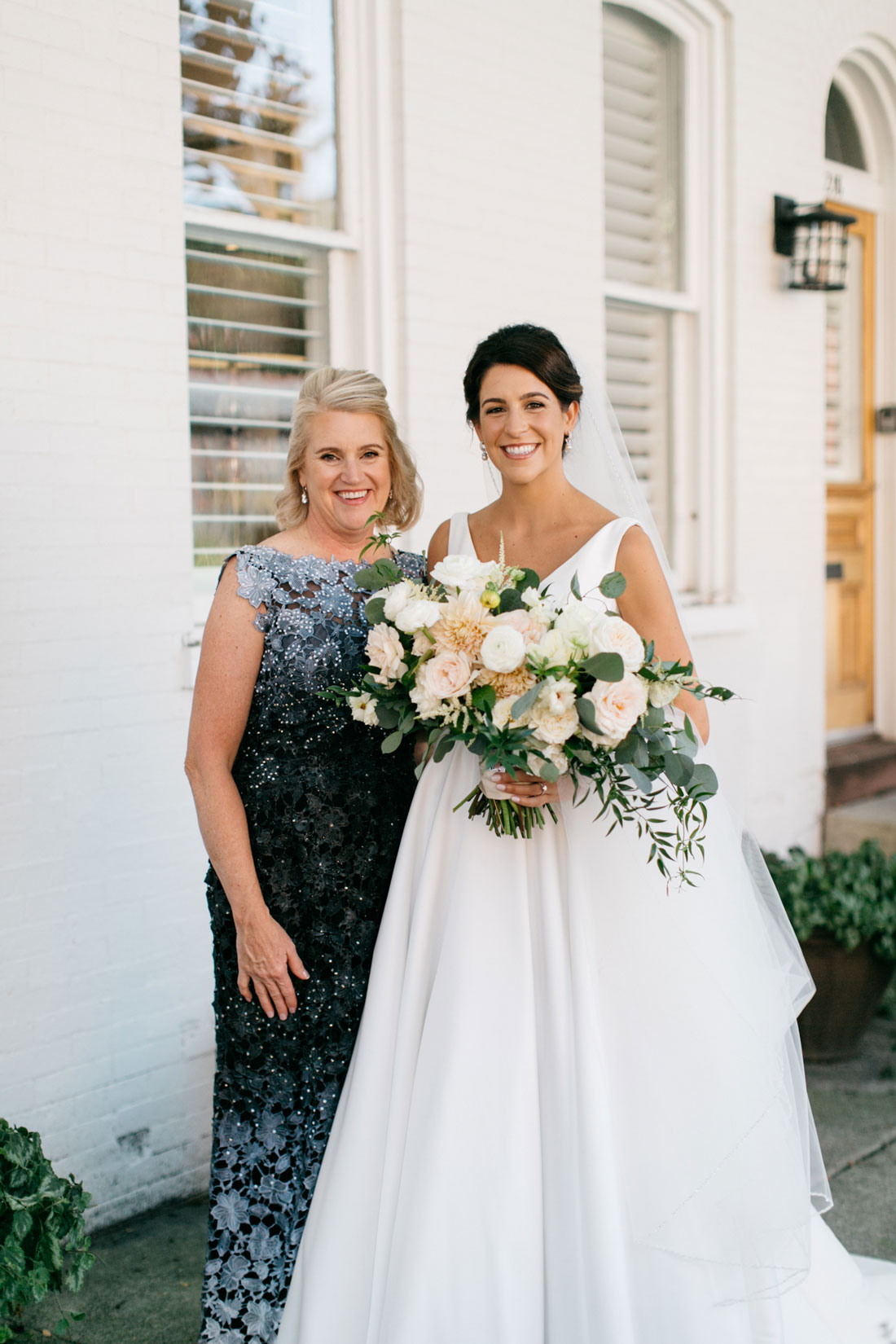 Brian’s daughter, Lara, served as Stevie’s matron of honor, along with another of Stevie’s stepsisters, and his son, Myles, joined Kim’s son, Colby, as groomsmen. “With one day to go before the guests’ arrival, we had one more intimate family dinner on Thursday night, which was the perfect time to relax together before all the excitement revved up,” Kim notes. 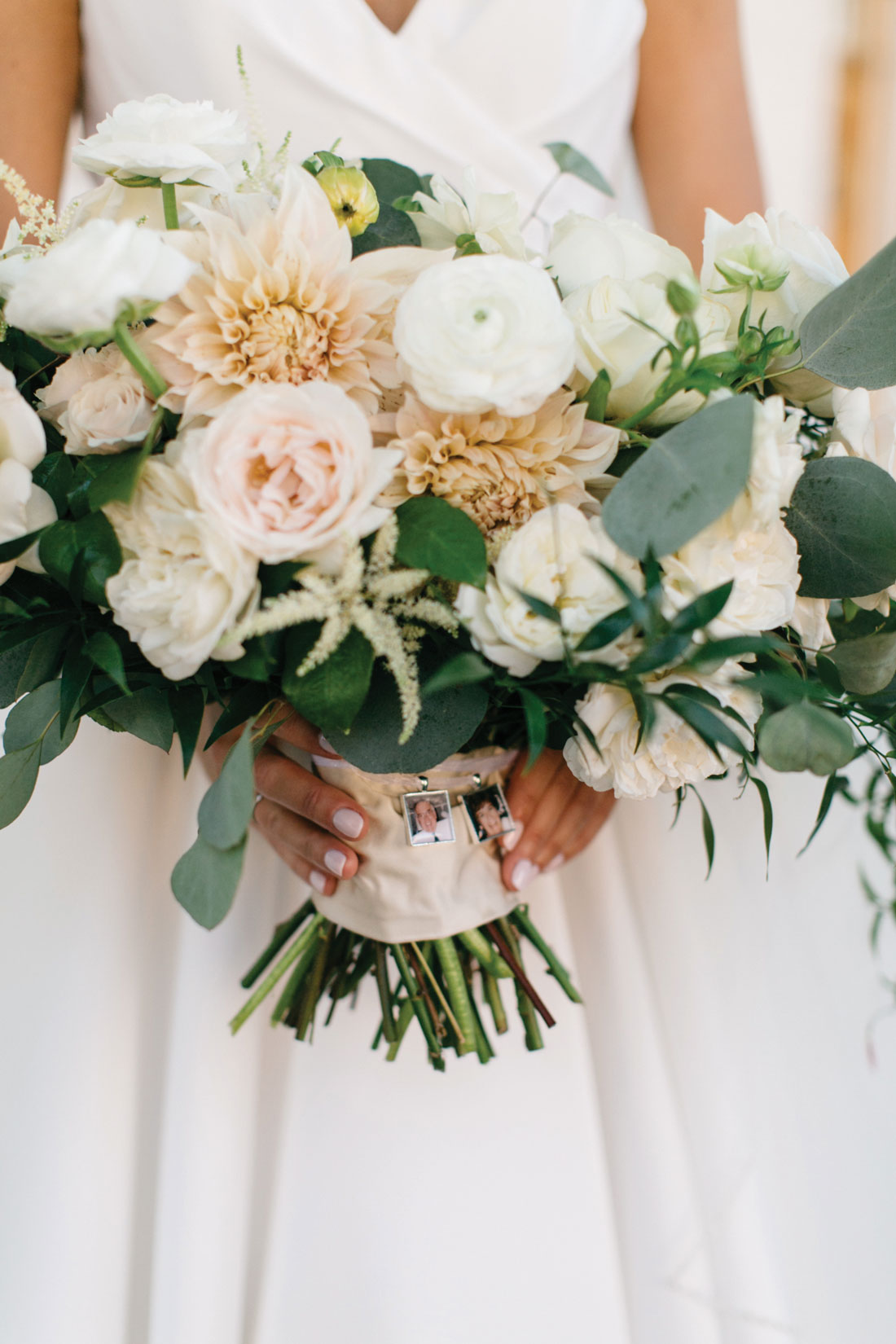 The bride carried fabric from her grandmother’s dress, along with photo charms of her deceased grandparents, in her bouquet.

Another take-your-breath-away moment, Kim recalls, was helping her daughter get dressed. Using a Chestnut Street Airbnb as the wedding party’s makeup, hair and dressing rooms, Kim held the train of her daughter’s gown as she descended the stairs to oohs, aahs and gasps from her bridesmaids. 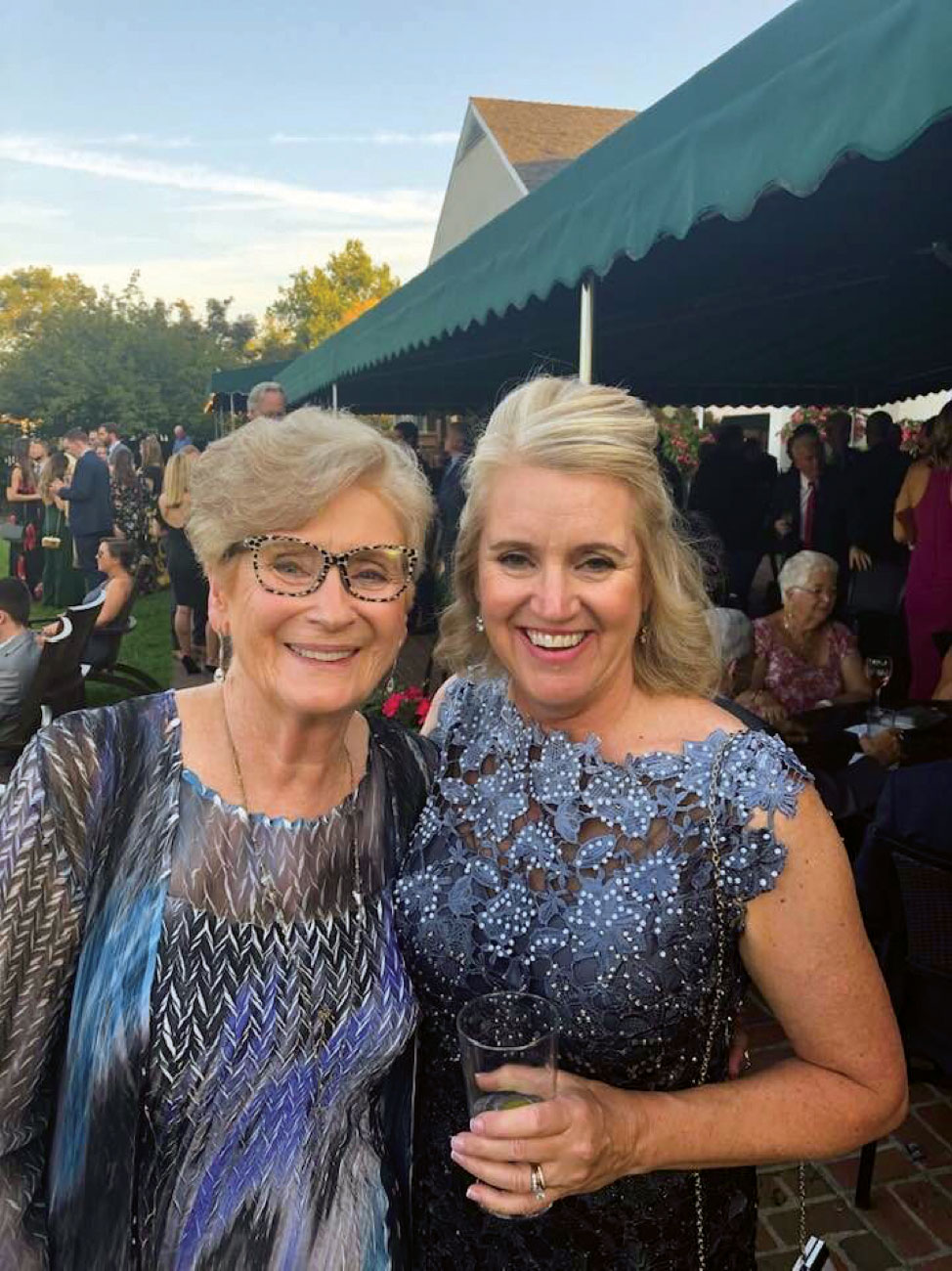 In a rare, quiet moment ahead of the ceremony, the bride shared a card with her mother. “Today is my day, but it’s also your day,” Stevie had written. “I admire you for being my mom.” 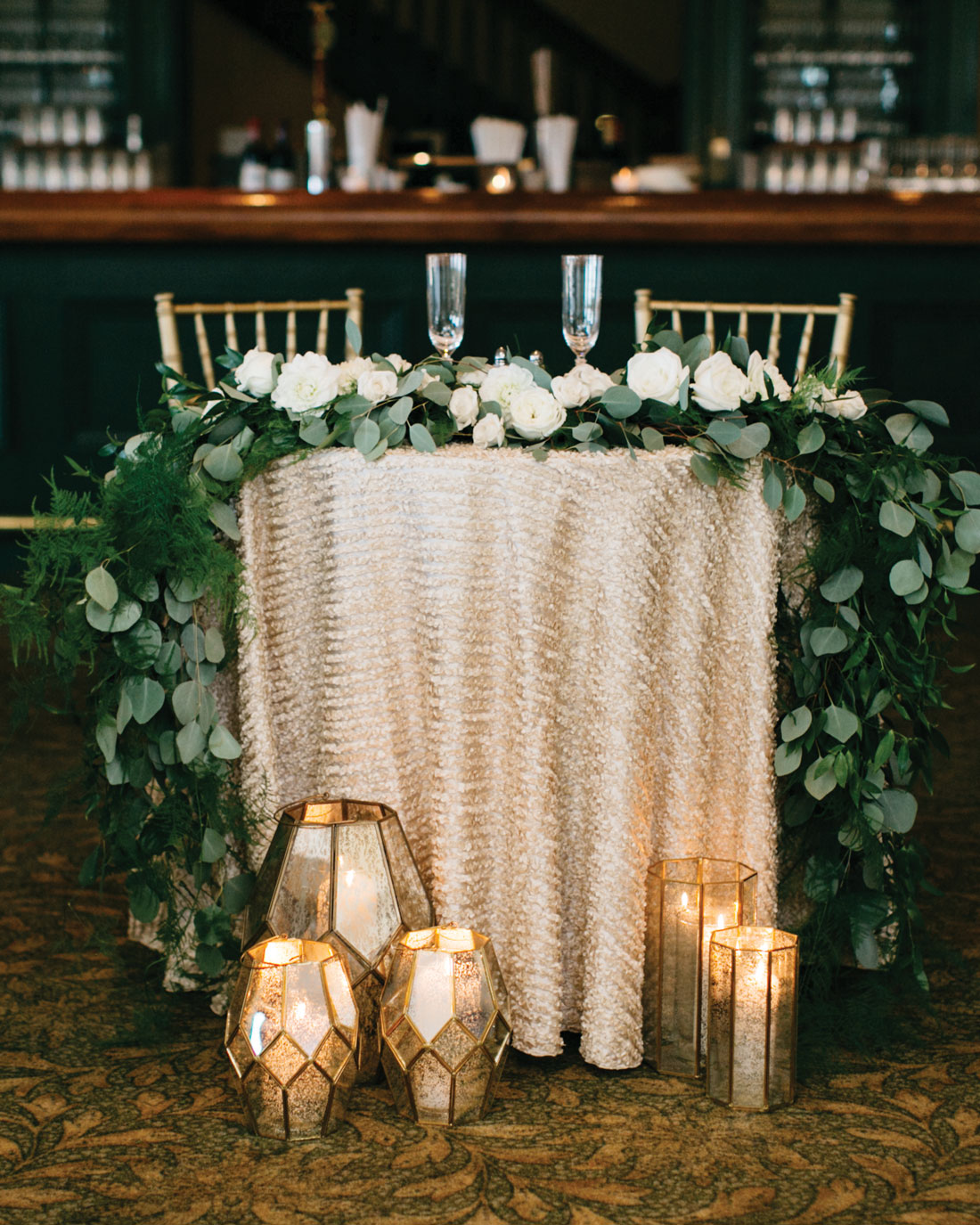 The bride also honored other family members, present and past. She carried a swatch of lace from Kim’s mother’s wedding dress wrapped around her bouquet. Deceased grandparents’ photos were framed in small charms that she also carried in her bouquet. 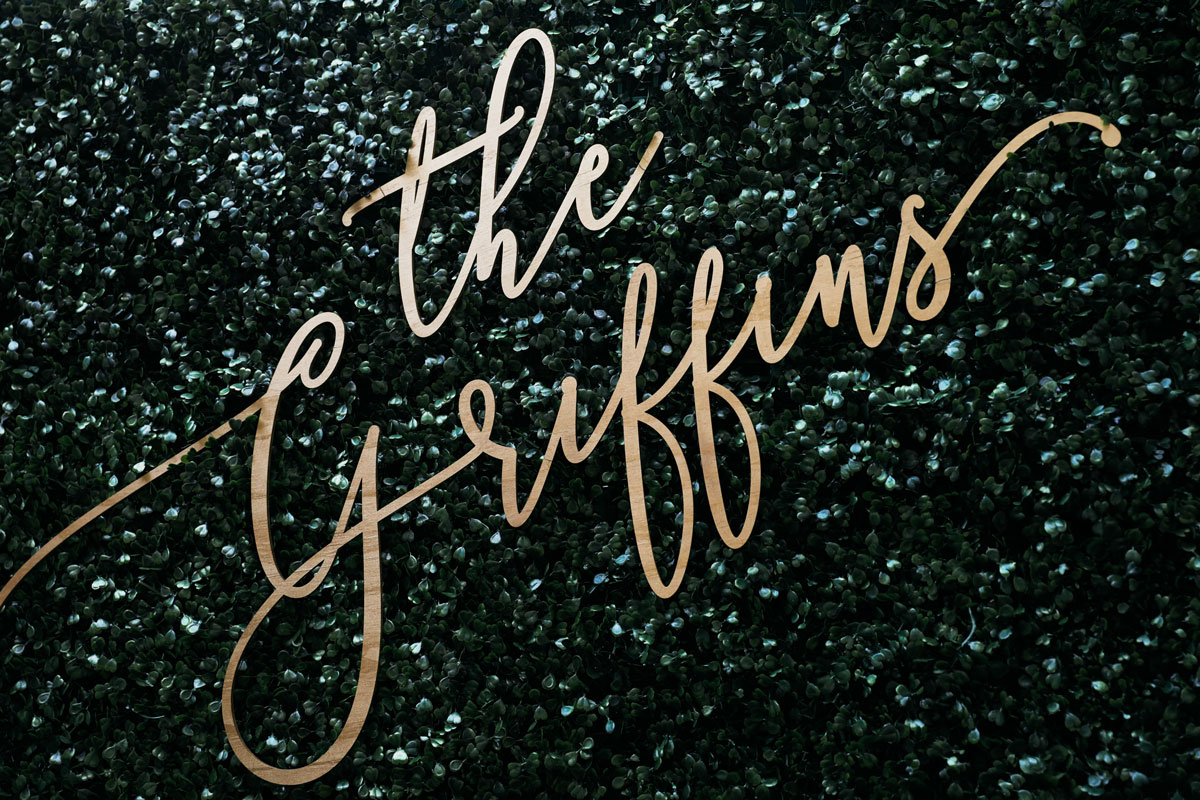 “It was an amazing day,” Kim reflects. “Watching this person who is so accomplished and so put together – my daughter – I had such a sense of pride.” Kim admits she was emotionally spent at the end of the weekend, but that didn’t stop her from hosting a catered Sunday brunch for 60 at the Roches’ home. “You dream about a day like this,” she says. “I wouldn’t have changed a thing.” 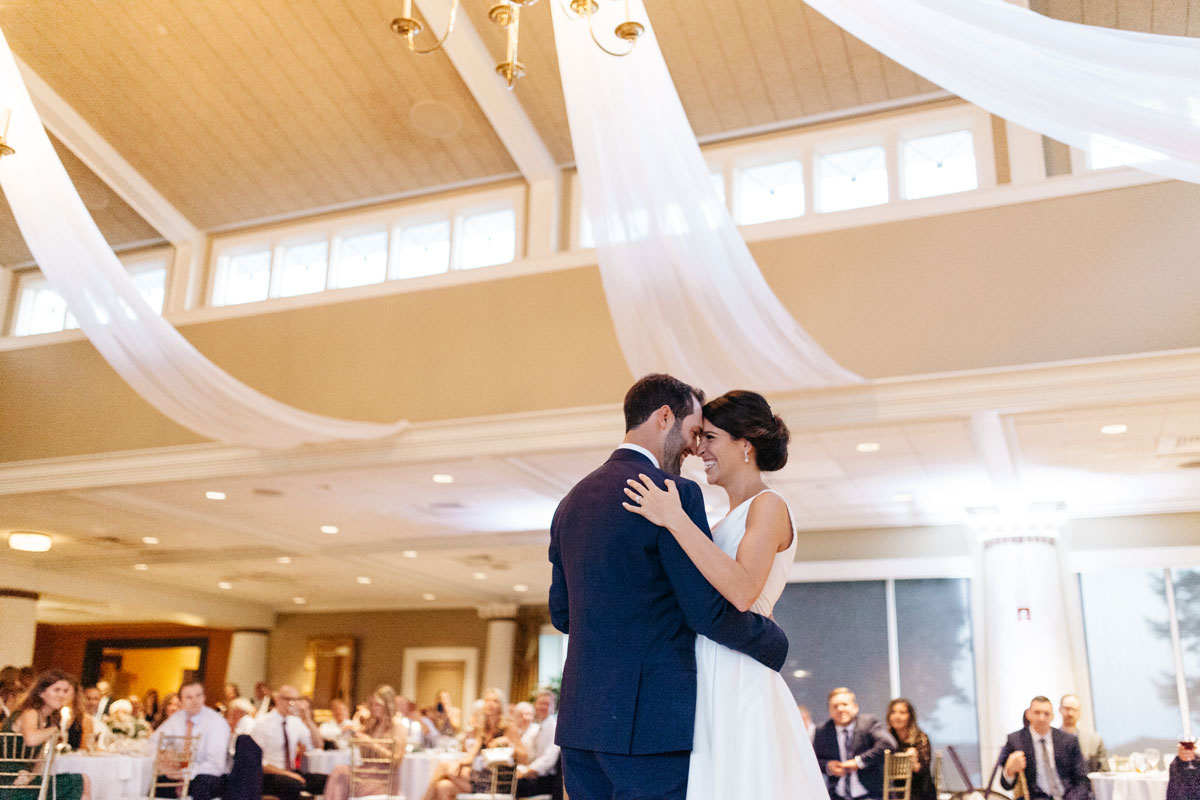 Bride and Mother of the Bride Gowns – In White