Steve Pollack is one of the most influential buyers of wine. As the supervisor of Pennsylvania’s Chairman’s Selection program, he deals directly with wineries all over the world.

Steve didn’t start out in his career as the savvy oenophile he is now. His career with the Pennsylvania Liquor Control Board began in the mid-80s, when he became a clerk in the Clarks Summit store. As the state began opening higher-end, Premium Collection stores, one of his colleagues suggested that his personality would lend itself to the program and that he should consider getting into wine. “I was like everyone else, tinkering around with sweet wine,” he recalls. “I said to myself, ‘I don’t speak French; I don’t wear a bow tie. I don’t know if that’s for me.’”

Steve decided to seize the opportunity and immersed himself in all things wine – taking classes, reading books and tasting as much as he could. As his palate matured, so did his career. Prompted by New York residents coming into his store to buy wine – and who complained about the poor selection – he became a retail wine specialist and thus was able to make a portion of the store his own.

Along the way, he realized he could go directly to the wineries for inventory instead of working through distributors. That prompted him to start knocking on doors and building relationships. “When I first started, eight out of 10 people would say, ‘PA? Are you serious?’” he says, noting that Pennsylvania was not highly regarded by the wine industry. But between his passion, his personality and his palate, Steve was able to earn respect and amass an enviable Rolodex of contacts.

In 2008, steve earned his current position overseeing the Chairman’s Selection program. He challenged himself to breathe new life into a program he felt was becoming stagnant. First on his to-do list was changing the buying process. “Before me, they used to go to California twice a year and do a big buy in January and a big buy in July,” he explains. “With me coming in and having so many direct contacts, it was a waste of time going to California twice.”

Now the sellers come to him. “I figure if you want to sell me 1,000 cases of wine, you’ll find me in Harrisburg,” he remarks. Every eight weeks, vendors visit and Steve tastes. He says his palate is his equation for pricing the wine. As he tastes, he asks himself, “What would I be willing to pay for this?” He says he is spot on about 92% of the time – and that’s the price you’ll see on store shelves.

Most of the Chairman’s buys equate to less than 2,000 cases, which means he is looking for an artisanal, luxury wine that he can offer to consumers at a deeply discounted price. Steve prides himself in offering wines for every palate and at every price point. He considers the $12-to-$20 range to be the “hot spot” for quality in the Chairman’s program, through which the retail price is normally a minimum of 40% off the quoted price.

“This is a tremendous opportunity that you don’t see anywhere else in the country,” Steve says. “You know you’re going to walk in and get a great bottle of wine for almost half off.” He goes so far as to say the price he’s offering in the Chairman’s program is the best price in the country. That’s how strong his buying power is.

In addition to negotiating great deals – in his opinion, the program’s inventory is the best it’s ever been – Steve also likes to buy wines that will encourage consumers to break out of their comfort zones. He says he loves to educate people and encourage them to break away from commodity brands and instead sample artisanal wine (at a great price). “My most exciting buys aren’t the California cabernets that are quoted at $28 and are priced at $14.99,” he comments. “Don’t get me wrong, that’s a good deal, but the best deal is something like this Otto Bucce (Italian red bistro wine) that’s $7.99 and quoted at $15.” Steve reports that he bought that wine, Dezzani Otto Bucce Rosso (from the Piedmont region of Italy), from a small Italian distributor that previously dealt only with Trader Joe’s.

Looking ahead, he predicts that Portuguese wines will be the “next big play” in 2016. And his eyes sparkle when he’s talking about a Macedonian pinot noir (Macedon Estate, 2013) he’s bringing into the program for the second year. (It sold out last year in two months; this year he was able to buy it at a lower price and is passing those savings on to consumers.) “It’s priced at $8.99, and it will blow your mind,” he says. “You’d walk right by it if it was $15, but at $8.99, it’s going to make you stop and say, ‘Let me try this.’” With floral notes and some soft strawberry spice, Steve says it “dances on your palate” and makes you crave another sip. To him, that’s good wine.

To assist consumers, Chairman’s Selection wines are designated with cream-colored signs that include the quoted and retail prices, grape varietal, notes and scores from industry publications, Steve’s personal tasting notes, and scales for body, sweetness and oak.

In other news: In September, Nissley Vineyards welcomed Jen Wampler as its new winemaker. She replaces William Gulvin, who retired after 23 years. Best wishes, Bill! And welcome, Jen!

His advice for Thanksgiving dinner wine pairings? Don’t sell yourself short by offering only one or two selections. After all, you’re pairing the wine not only with the main dish but also with all the sides. He notes that there’s so much contrast in Thanksgiving’s food flavors – sweet cranberry sauce, rich herb stuffing, creamy mashed potatoes – that any soft, fruit-forward wines will pair nicely. Since turkey – even when slathered with gravy – is a dry meat, he advises staying away from a heavy, dry wine.

Steve’s recommendations for Chairman’s Selection wines* to pair with Thanksgiving dinner – all will be available by mid-November – include:

*NOTE: The aforementioned wines are available only at Premium Collection-designated Fine Wine & Good Spirits stores. In Lancaster they include 2076 Fruitville Pike, 558 Centerville Road, and 1036 Lititz Pike. 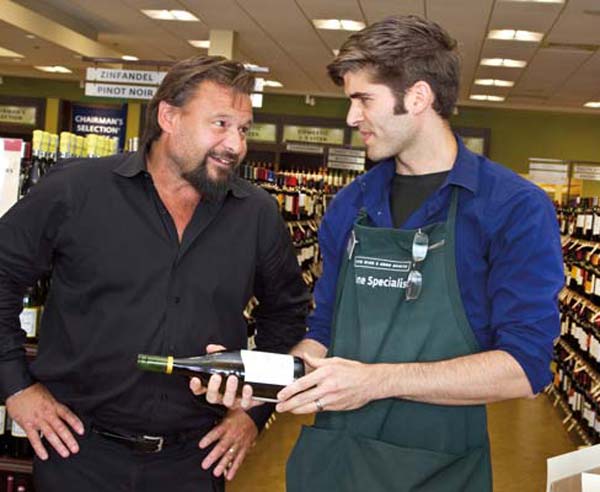 Steve Pollack, who supervises the Chairman Selection wine program, confers with Josh Hull, who is a wine specialist at the Fine Wine & Good Spirits store in Lititz.