While he skated the rinks as a 10 year old, Ron Kennard had no idea that at age 72, he’d still be lacing up his skates to play ice hockey.

It’s not something Ron set out to do; it just naturally evolved from a lifelong love of playing ice hockey. And, he’s not alone. Ron skates with 22 of his peers at Regency Ice Rink in Lancaster. Their shared love of the game prompted Ron to form the Mixed Nuts Hockey Club in 1984. “It was difficult to get started,” Ron recalls. “We began with some guys who never skated before.”

Thirty years later, Mixed Nuts is still going strong. Since its founding, more than 100 individuals have been members of the club. Today, two or three of the original skaters remain. Most members are over 60, with a few in their 40s and 50s. One 18-year-old participates. The club even boasts three-generation members: grandfather Fred Suydam, son-in law Andy Trostle and grandson Matt Trostle (the aforementioned 18-year-old, who serves as goalie).

The word “mixed” accurately describes this lively group of gracefully aging athletes, with each personality more different than the next. But, despite this diversity, they all agree on one point – they’re in this for the fun and the camaraderie. There’s a lot of good-natured ribbing, joking and locker-room banter that keeps them coming back for more. Lifelong friendships have formed from these Tuesday-night skates. For example, Ron, Denny Ott, Kenny Rice and Mose Weiler have been playing with and against each other for more than 50 years.

Surprisingly, exercise is viewed as a side benefit! Because skating is a fluid motion, it’s easier on the joints than running. Still, you need to be in shape in order to wear 30 pounds of protective gear while skating. Most credit that to “skating once a week with the Nuts,” and doing it year round with no time off. Some add cardio at the gym, while others have walking regimens or work out with light weights. Several members skate more than one night a week. Jamie Bashore, 66, skates three times a week with different clubs.

The tuesday night games begin with the “splitting of the gloves.” One week a member will play with another member, and the next week he’ll play against him. The last goal of the night wins the game. That last burst of energy to win provides great cardio exercise.
As for the games, the rules are simple. There’s no roughing, checking or tripping (unless it’s by accident), etc., so there’s no need for a referee. It’s all about enjoying a relaxing game and safe play.

Mixed Nuts is a tight-knit club that prefers to protect its “chemistry.” They do this by interviewing new prospects via a method they refer to as “double-secret probation.” If it looks as if a prospect is there to tear up the ice or play aggressively, he’s asked to find another group to play with.

To emphasize the good-natured style of play, a new member is told, “If you can still be offended after two weeks of playing with us, then this is not the spot for you.” Ron laughs, “We really get on each other’s case in a loving way. You wouldn’t do that if you didn’t like the person.”

The love of hockey has always been in their blood; some members’ playing days date as far back as when they were five-year-olds skating on ponds. Others went on to skate at higher levels: Denny Ott and Ray Ferry both played Division II hockey in college. Ray is not just a member of the Mixed Nuts, he is also the owner of Regency Ice Rink. In addition, he is president of The Central Penn Panthers Ice Hockey Club (for ages 16-20) and the Regency Panthers Youth Ice Hockey Club, where he is also a coach. He also runs an adult rookie league (different levels) through Regency.

While fun, camaraderie and exercise are the club’s goals, there’s also a more competitive side to the Mixed Nuts. Club members like to play in the “over 50” and “over 60” tournaments that are held across the United States and Canada. When they play in tournaments, they’re a team, and when they play on home ice, they’re a club.

“Hockey for life,” is a phrase the Mixed Nuts are well familiar with. They have come to know hockey has nothing to do with age. Rather, it’s all about the lifelong love of the game! 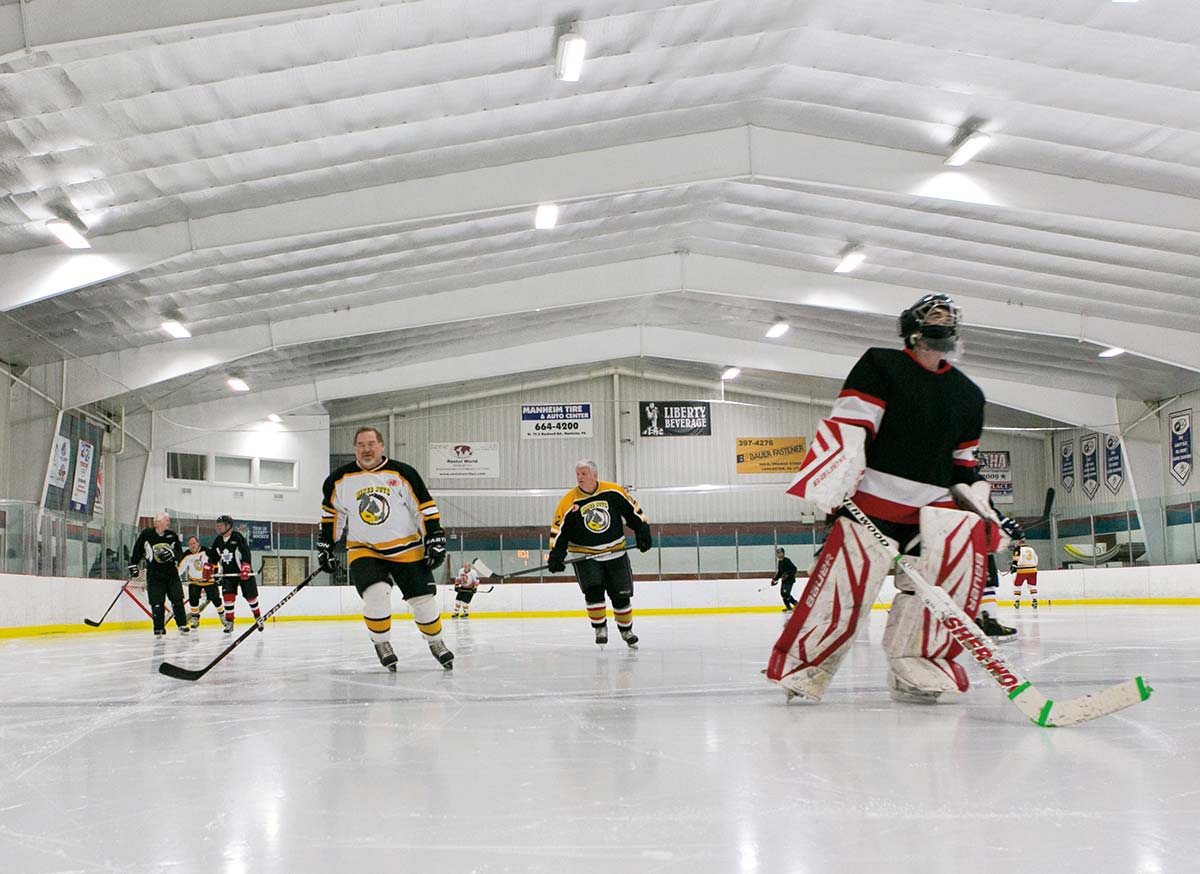