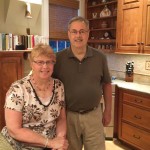 Mike and Linda  both grew up in Willow Street. He lived west of the Willow Street Pike, while she lived east of it. Hence, Mike went to Penn Manor, and Linda went to Lampeter-Strasburg. Mutual friends brought them together. “I went from hanging out with the guys to spending all my time with Linda,” Mike recalls. They were married in 1973.

Two years later, they decided to buy a house. Linda had always loved Strasburg, so they concentrated their search there and found a house that needed some TLC. “Saying that it needed work is an understatement,” Mike admits. “We bought it as is, figuring we were young and energetic and could remodel it.” That was completely doable: Mike, who is a kitchen designer with Paradise Custom Kitchens, hails from a family of creative people. His father, Maris, is a retired industrial arts teacher; his older brother Jim (who lives at the other end of Strasburg) formerly owned a design/fabrication awning business, and his other brother, Larry, is a master carpenter and owns a construction business.

The family, which had grown to include son Jason, moved in around Thanksgiving 1975. “My mother was horrified that we were taking a 6-month-old baby to such a place,” says Linda, who is the director of Lampeter-Strasburg School District’s before/after school program.

The house soon became a home, and the family grew with the arrival of two daughters, April and Carrie. “We did so much to this house,” Mike says. “Larry transformed the rickety porch into a sunroom. We moved walls around both upstairs and down. We added bathrooms, closets and a laundry. Linda’s grandfather got the landscaping under control.” A new kitchen was added several years ago. “We’re always doing something around here,” Mike says. “That’s the thing about owning an old house; you have to be committed. Maintenance is an on-going issue.” He says that the one and only time he painted the exterior of the house himself convinced him to hire professionals for the job.

At one point, the McCulloughs purchased a lot in a Strasburg-area development with the intent of building a house, but in the end they just couldn’t imagine leaving their home and the convenience of living in a small town. So, they sold the lot and bought a parcel of land behind their property, which they refer to as “the meadow,” and filled it with swings and other kid-friendly entertainment.

Now, with six grandchildren, who range in age from 5 to 20, and one doted-upon granddog, the McCulloughs say downsizing is not in their future. “We feel we need the space,” says Linda, explaining that theirs is still the go-to place for holiday dinners and that Carrie and her family, who live in Pittsburgh, often visit. For the McCulloughs, Strasburg is and always will be home.

Before the arrival of settlers, the area was home to Native Americans who traveled along a path that became known as the Great Conestoga Road. Today, Main and Miller streets follow that route through Strasburg. The first Europeans settled there in 1729. Edward Dougherty purchased 150 acres east of what is now Jackson Street. Dougherty opened a tavern and trading post. Subsequently, Mary Kendig Herr and Christian Herr inherited 150 acres that stretched west from present day Jackson Street. In 1751, the two families subdivided their tracts of land and a village was born. Named in honor of Strasboug in the Alcase region that borders on France, Germany and Switzerland, Strasburg expanded, becoming the second largest town in Lancaster County by the end of the 1700s. Prosperity came courtesy of the Great Conestoga Road; travelers, freight, wagons and animals made it a busy thoroughfare. Businesses that catered to their needs lined the route.

A new road – the Philadelphia to Lancaster Turnpike – prompted a decrease in travel through Strasburg in the late 1700s. A savior arrived in the form of the railroad. The Strasburg Rail Road was chartered in 1832, prompting a revitalization of Strasburg. New buildings began to emerge along Main Street. 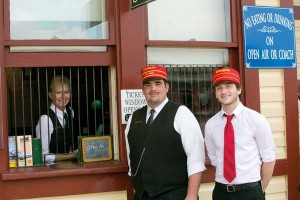 Visitors to the Strasburg Rail Road are greeted by employees such as Blanche Goodhart, who has been at the Rail Road for 20 years; Korbin Shearer, who is in his third year; and Tyler Welthers, who was four hours into his new job on the day we visited. 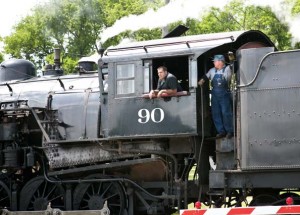 After taking passengers on a ride to Paradise, the train makes its way back to the depot in Strasburg.

That railroading tradition continues today, as Strasburg is known the world over as Train Town USA. In addition to the Strasburg Rail Road, the area is home to the Railroad Museum of Pennsylvania, the National Toy Train Museum and the Choo Choo Barn. Sight and Sound Theatres is also a major draw, attracting visitors to the area to witness its Biblical-based productions. And, speaking of “witness,” the Harrison Ford film still generates interest and questions from tourists.

Visitors are also enamored by Strasburg’s architectural history. The historic district, which stretches nearly the full length of Main and Miller streets, is filled with structures that date from the 1700s through the late 19th century. The Strasburg Heritage Society, which was formed in 1977, is the keeper of Strasburg’s history. The organization hosts fundraising events throughout the year that allows them to continue restoring properties it owns along South Decatur Street, including the Shroy House, which is destined to become a museum. For more information, visit strasburgheritagesociety.org.

Scenes from a Small Town

The Simple Things in Life: 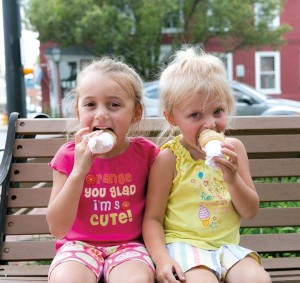 The benches on the square in Strasburg are filled with ice cream lovers that are drawn to the Strasburg Creamery during the warm weather months.

Mike and Linda like the fact that Strasburg is very walkable. “When Rambo [their Scottish Terrier granddog] is here, we like to walk down to the square for ice cream,” Mike notes.

There’s nothing like being able to walk your dinner off! Mike and Linda like the fact that whatever they crave is just a walk away. Favorite destinations are Pizza City, Isaac’s, Sugar on Top, Strasburg Creamery, Fireside Tavern and the Speckled Hen.

Linda says she has always felt safe about letting her children ride their bikes or walk to such destinations as the library or the pool. Their grandchildren have developed friendships with kids in the neighborhood and are always back and forth between their grandparents’ home and their friends’ homes.

Where Everyone Knows Your Name:

Mike likes the fact that small-town living allows him to develop casual acquaintances. “It’s nice to walk down the street and chat with your neighbors, or walk into the hardware store and the people working there know you,” he says. He also feels comfortable going to the fireman’s breakfasts solo, as he’s sure to bump into someone he knows. 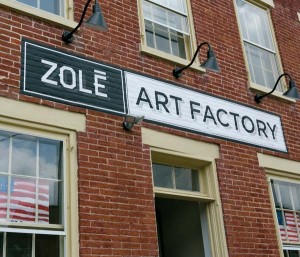 Makers at the Zolé Art Factory create furnishings, jewelry and gift items, which are sold in its retail locations. Classes, workshops and painting parties are also offered. Shopzole.com.

Strasburg is a tourist mecca, and the McCulloughs report meeting people from all over the world. “They mostly stop and ask for directions or recommendations,” Mike says. Both agree that the new by-pass has made living in Strasburg much quieter. Before the bypass, exiting the driveway was a challenge. “Gap Road used to be backed up for miles,” Mike says, noting that locals heading home from the shore only added to the congestion. “Now, we don’t even know when Thomas the Tank is in town,” Linda says of the popular visitor to the Strasburg Rail Road.

Mike loves to ride his bicycle along the country roads that wind their way through the farmland and wooded areas that surround Strasburg.

The Red, White & Blue: Strasburg’s Memorial Day Parade is a must-see event. “Our grandkids spent days decorating their scooters for the parade,” Mike notes. Jim and Maris McCullough also participated in the parade; they were in the front seat of a 1952 Dodge pick-up they restored. “They both can still fit in their Army uniforms,” Mike says. 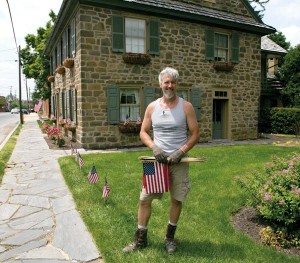 Brad Botchlet, who calls himself “a transplant,” moved to Strasburg 14 years ago. When he was told we were doing a story about small town living, he responded, “You certainly came to the right place.” Brad says his house, which dates to 1750, brought him to Strasburg.

As in many small towns, Mike and Linda notice that quite a few homes in the historic district pass from one generation to the next without being put on the market. Over the last two decades, new homes have been built west of town. Strasburg is also home to a 55+ community developed by Charter Homes.

Mike’s office is in Paradise, while Linda travels to Lampeter. Both have 10-minute commutes. “A lot of my clients are in Chester County and the Main Line, so living in Strasburg is really convenient,” he points out.

August 19-20: Lewis-n-Clark will perform everything from classic jazz to Rat Pack covers and vintage country. Event will be held in The Barn; dance floor will be open! 312 Paradise Lane. 7 p.m. Redcaboosemotel.com.

July 23 & October 22: Great Train Robbery. Watch out for Bonnie & Clyde during this interactive ride. All “donations” will benefit the Clinic for Special Children. 4 p.m.

August 27-September 4 and November 18-20: A Day Out With Thomas. America’s favorite little blue engine – along with Percy – makes a return visit.

November 5-6: Trains & Troops is an annual salute to the U.S. Armed Forces and the role railroading played during war time. There’s a swing dance, too.

July 2-November 5: Cherry Crest Adventure Farm What began as a corn maze has grown into agritainment for the whole family. This season’s theme is “Thank a Farmer.” The popular flashlight tours begin September 16. 150 Cherry Hill Rd. Hours vary by the month. Call 866-546-1799 or visit cherrycrestfarm.com. 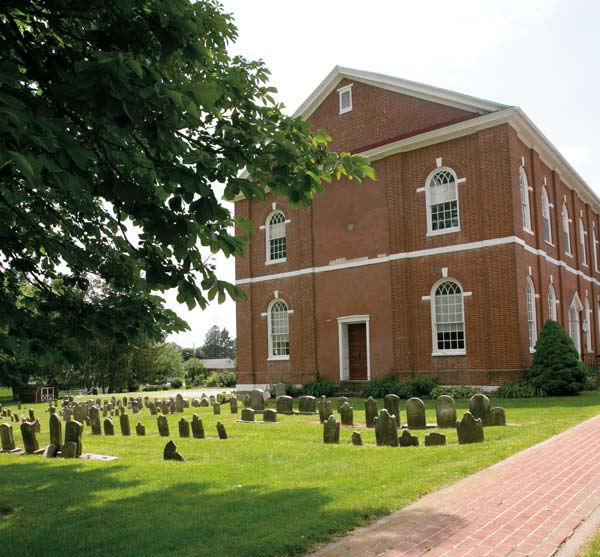 St. Michael’s Evangelical Lutheran Church was founded in 1754. The present-day church building was constructed in 1806.