Dining outdoors has become a rite of summer. Many local restaurants now offer beautifully landscaped and illuminated outdoor areas where food, drinks, entertainment and fun are on the menu. In Northern Lancaster County, the go-to destination is The Double D Grubbery at Foxchase Golf Club. 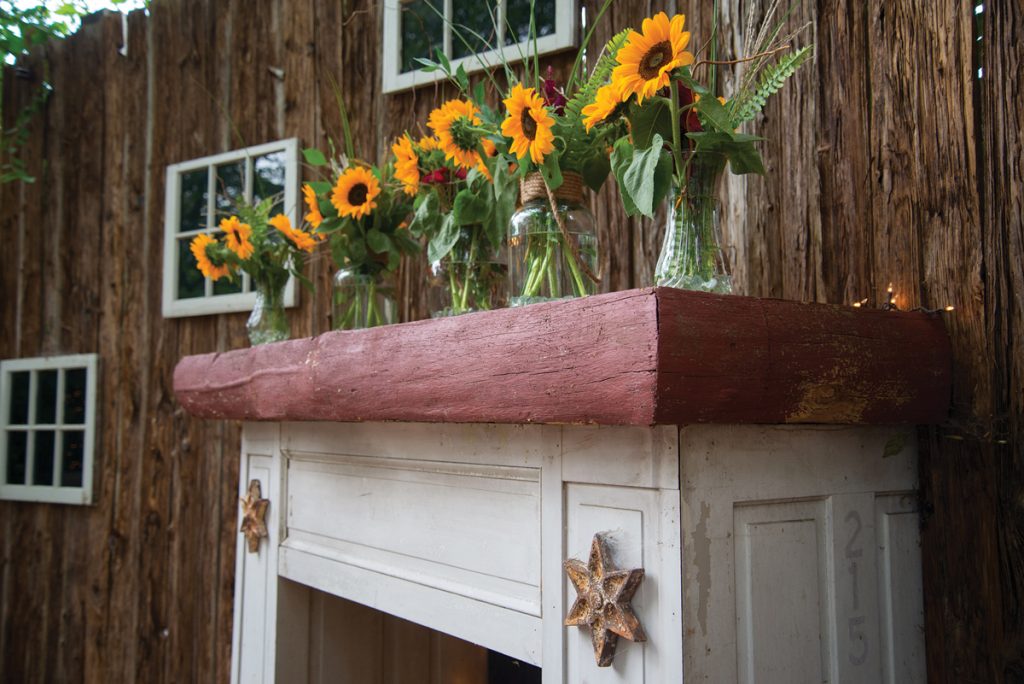 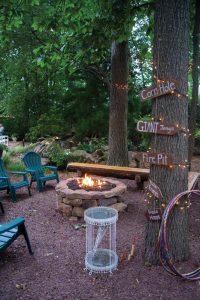 Four years ago, Foxchase’s owners, Doug and Steve Graybill, were looking for a way to further utilize the club’s pavilion that consistently stayed booked for weekday golf tournaments. Envisioning it as an evening destination for the community, they opened The Double D Grubbery, offering a menu of casual fare and summer-inspired drinks on a Tuesday-through-Saturday basis.

The positive response to their new venture prompted the cousins to up the ante. They expanded the venue with The Grove, which was created by taking down trees and clearing brush. Concrete was poured to define the space. “It was done on a really windy day, and the guys pouring it were upset that leaves and other things were landing in it,” Steve says. “I told them not to worry about it, that we’d pick it off later. Well, when we did that, we were left with impressions that looked like fossils. It was perfect!” 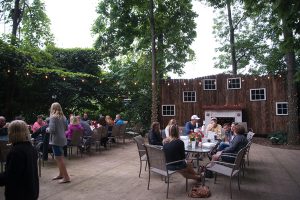 They also brought in another cousin, Dwight Graybill of Cocalico Builders, to work his magic from a décor perspective. He further defined the space by enclosing it with walls. One was built from mushroom wood and enhanced with old window frames that were salvaged from an area farmhouse that had been razed. Another wall was created from 100-year-old barnwood that came from the family’s Triple G Farms – the golf course, which is 27 years old, was carved out of the Graybills’ farmland. “As kids, we used to drive golf balls into the side of one of the barns,” Dwight explains. “The wood was dimpled from the force of the balls hitting it. I thought it was an appropriate addition to a golf course. People often ask how we made the wood look so old.” 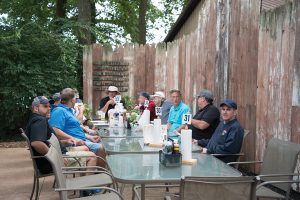 He also created a faux fireplace using doors salvaged from the Mountain Springs Hotel in Ephrata. “One of them still has the door number on it,” he points out. “That’s the neat thing about what we’ve done,” he says. “Because we’ve reused architectural elements from the area, there’s a lot of local history here.” 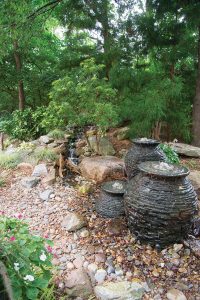 C.E. Pontz Sons further beautified The Grove area by adding landscaping and a water feature.
In addition to dining, The Grove has become a popular destination for bridal and baby showers, birthday parties and other smaller social events. It’s often utilized as the venue for cocktail hour for Foxchase weddings.

Weddings prompted another expansion project at Foxchase – the construction of a second pavilion. Dwight added design elements to that structure by lining the ceiling with metal roofing material, adding lighting, building a bar and incorporating sliding barn doors that enable the venue to function as one entity or separate areas. “We just dressed it up a little bit,” he says. Depending upon availability, the wedding pavilion will be used this summer for overflow from The Double D Grubbery. 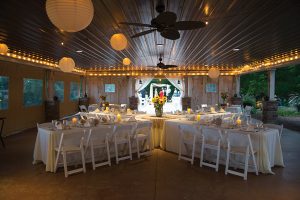 The venue will become a bona fide family affair on June 30 when Doug’s daughter, Korrie, who serves as the events coordinator for the club, has her own wedding on the premises. “Oh, she’s keeping me busy,” Dwight says of the enhancements and finishing touches she has assigned him. Korrie loves Foxchase’s vibe, saying, “It’s tucked away, and it offers beautiful views of the countryside – it’s just a wonderful place to sit and relax.”

More changes are on tap for 2018. The Double D Grubbery’s summer season debuted on May 16 with an expanded menu – courtesy of Chef Rick Bender – that includes appetizers, salads, flat-bread pizzas, sandwiches, burgers and entrées such as crab cakes, rib-eye steak and Santa Fe chicken. The menu also offers a selection of kid-friendly items. “We feel we have the staff in place to take The Double D Grubbery to another level,” Steve remarks.

The fun element is also being expanded. Those waiting for tables or wanting to stay beyond dinner can now play games such as croquet, cornhole and golf. In regards to golf, it’s probably safe to say you’ve never played a round like the one Foxchase offers. The 9-hole short course is in the midst of a cornfield. “It’s the only course of its kind in the nation,” Steve says, noting that the holes are big enough to swallow a soccer ball, which makes it perfect for golf-loving parents and soccer-loving kids.

Foxchase Golf Club is located at 300 Stevens Road in Stevens. The Double D Grubbery is open Tuesday-Friday, beginning at 4 p.m. On Saturday, doors open at 12 p.m. For more information, call 717-336-3673 or visit foxchasegolf.com. 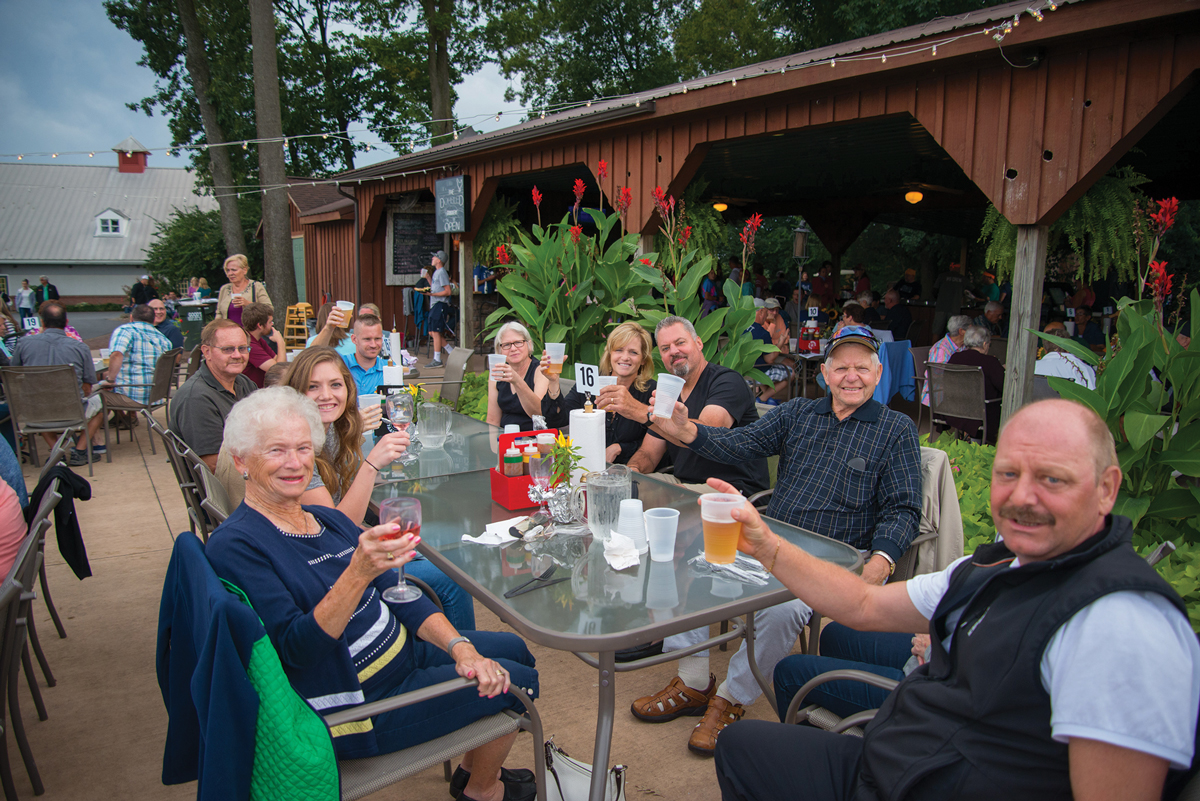