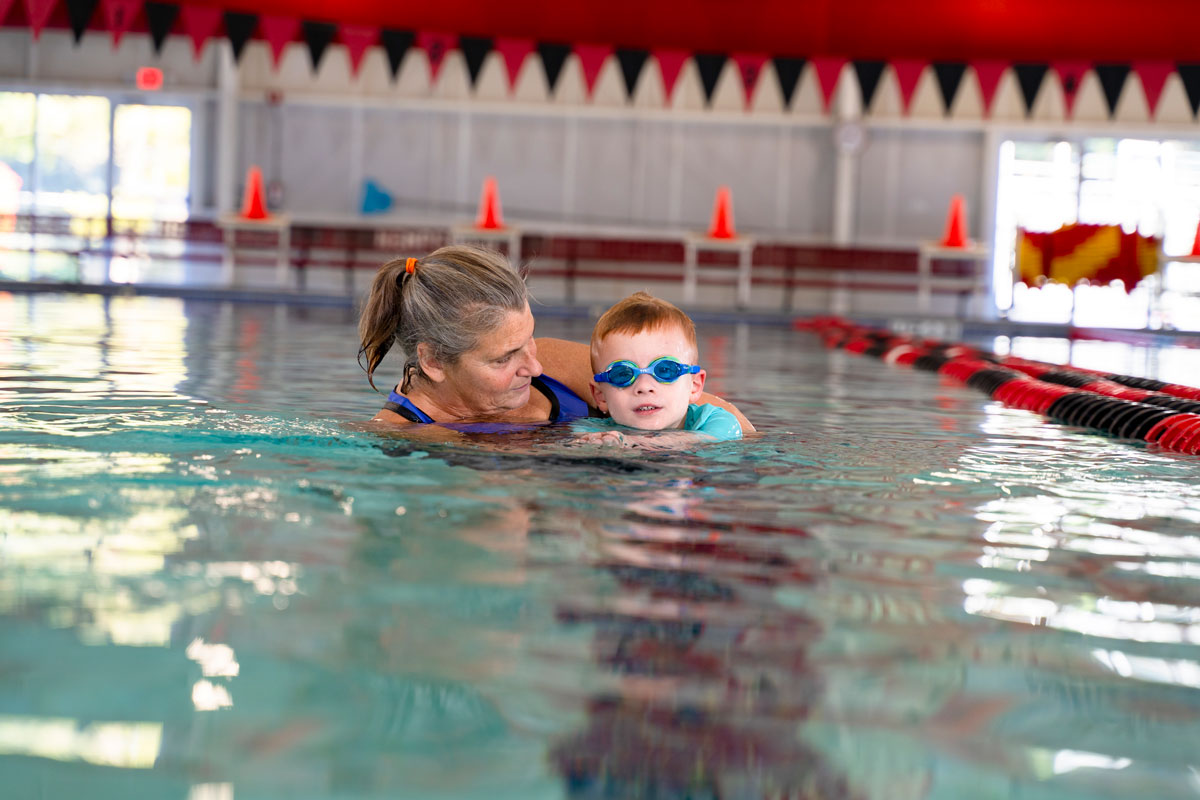 Mindy Yocom guides one of her students, Carter Thomas, through his swimming lesson at Hempfield recCenter in Landisville.

Mindy Yocom is very happy to be working at the Hempfield recCenter in Landisville. But, it took a long and steady transition from being a writer, an actor and a stage worker to prepare her for her next act.

Mindy will always remember becoming a resident of Lancaster County. At age 13, she and her family moved from New York to Washington Boro in the middle of Hurricane Agnes. Mindy likes to joke, “I was excited! When we moved in, I thought we had a pool in the basement!” Little did she know that swimming pools would one day become a part of her life.

Mindy hails from a family of writers, actors and teachers. Her mother, Naomi Yocom, was a feature writer and columnist (One Happy Family) for the Lancaster New Era (LNP) for 25 years.

A talent for writing extended to Mindy’s maternal grandmother, Dorothy Wegman Raphaelson, who authored two books, and her grandfather, Samuel Raphaelson, who wrote the short story and the play, The Jazz Singer, as well as scripts for Broadway, film and television productions. 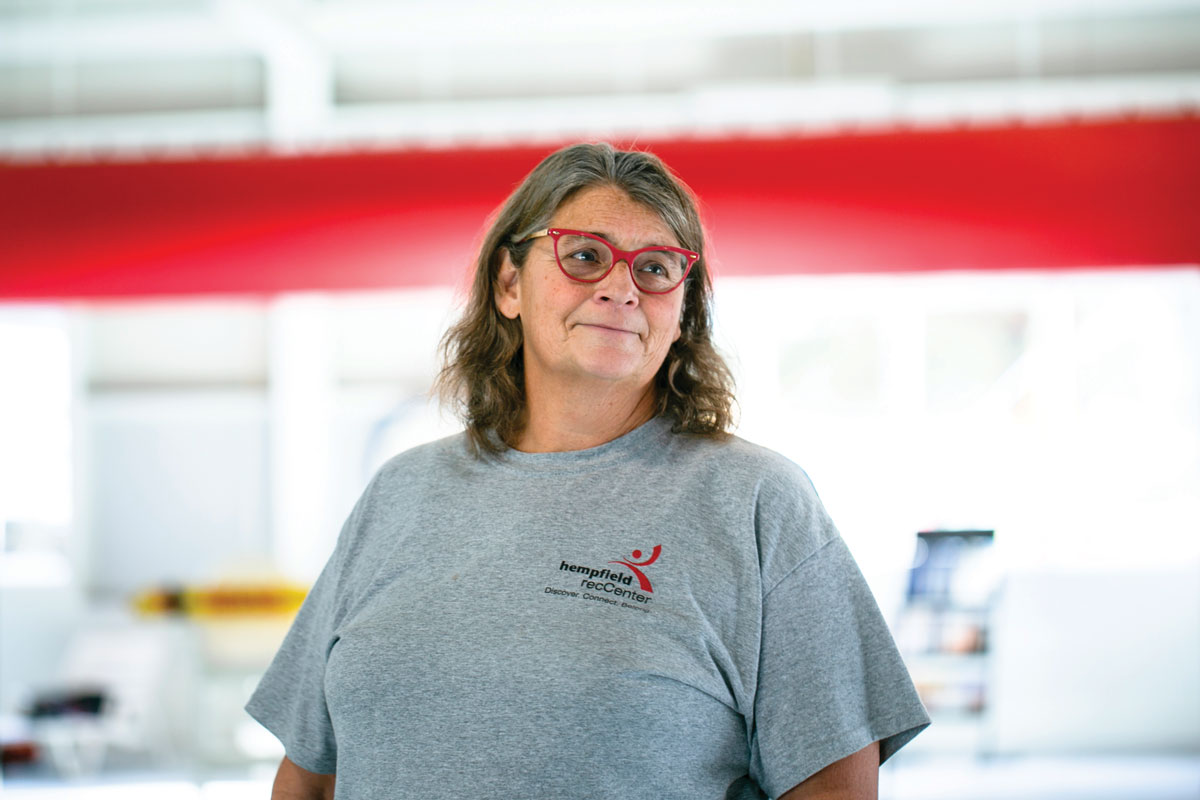 Mindy’s past experiences as a writer, actor and stage hand have meshed with her love of aquatic activities to create a multi-faceted “third act” that entails lifeguarding, teaching and managing the East Petersburg Community Pool in the summer. Her love of the water flows into her leisure time, as she is an avid shell collector and kayaker.

The performing arts are also a part of Mindy’s DNA. Dorothy Raphaelson was a member of the Ziegfeld Follies. Mindy’s parents met when they were summer stock actors. Her father, Ray, went on to become a sales rep for educational products used in hospitals and schools.

Teaching is also in her blood. Her Aunt Rachel was principal of the High School of Performing Arts in New York.

Today, Mindy, who recently celebrated her 60th birthday, proudly incorporates all her inherited talents into her work as the assistant aquatics director at Hempfield recCenter, where she lifeguards, leads water-exercise classes, teaches swimming lessons (her students range in age from 6 months to 96 years) and manages the East Petersburg Community Pool in the summer. She also conducts lifeguarding and lifeguarding re-certification, ASHI (American Safety & Health Institute) and first-aid classes. 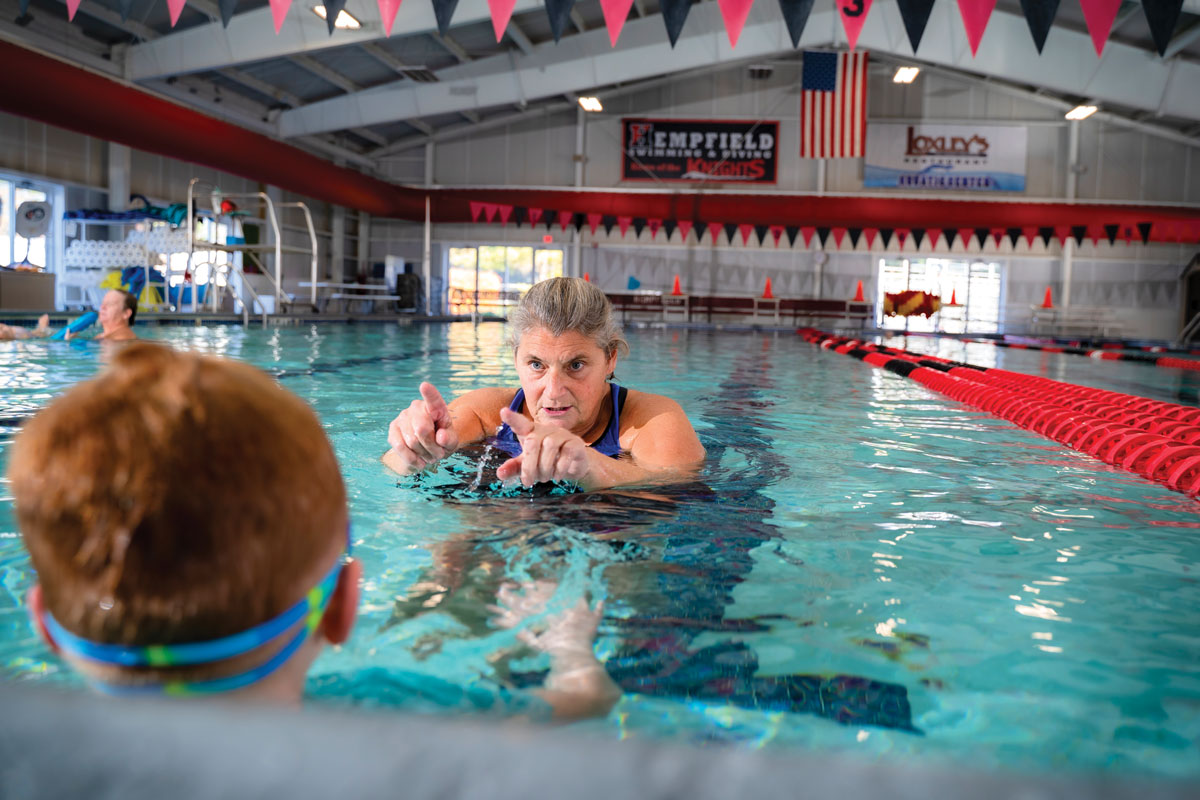 Mindy graduated from Penn Manor High School (1978) and Shippensburg University (1982) with a degree in journalism. After college, she went to work for TV Guide as an editions editor and a writer. Mindy confesses she was not very good at her job as she “was not a desk person.” According to her, “I was basically trying to be that square peg that fits in a round hole.”

A classified ad caught Mindy’s attention in which Mary Haverstick (a well-known filmmaker and classmate at Penn Manor) was seeking technical help for a local film she was doing. Mindy answered the ad and ended up being cast in Mary’s movie, Shades of Black. “It was not a major role, but I had my name in the credits,” she informs. (She did some acting in high school, with her break-out performance being Erika, the talking tiger, in The Island of Dr. Moreau.) 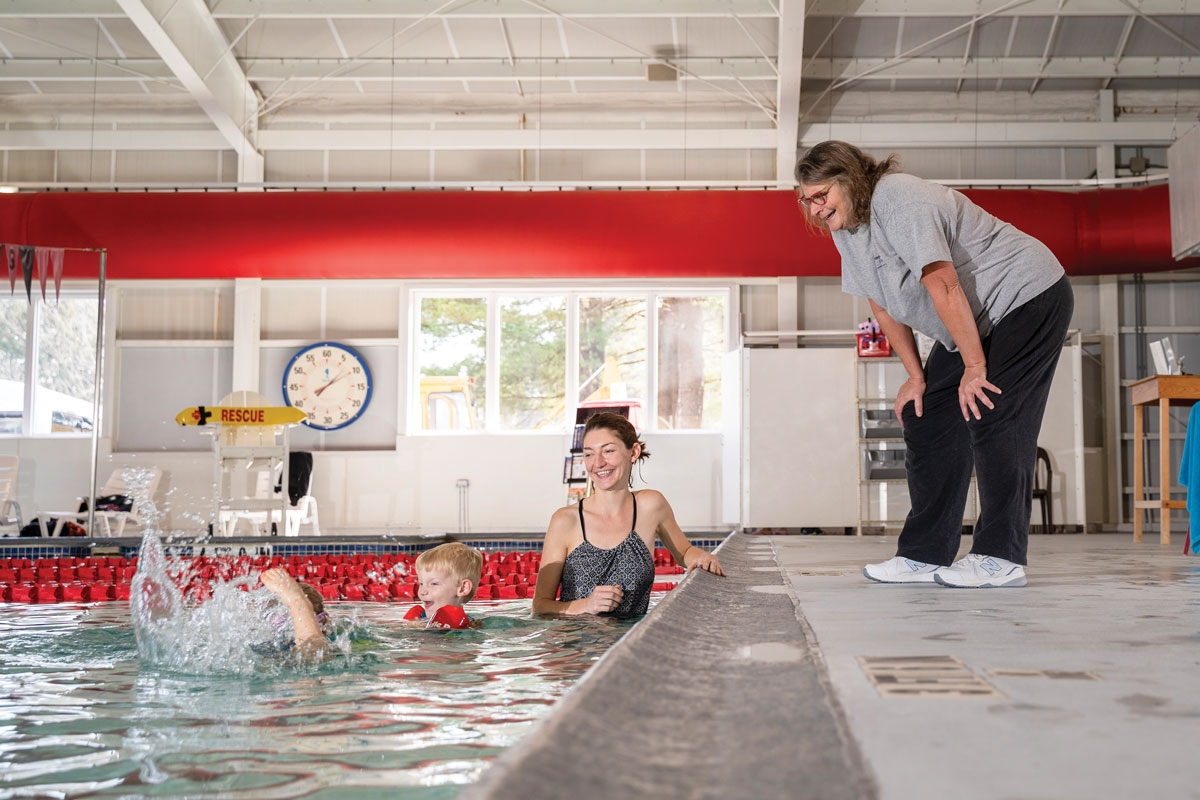 Mindy checks in with a mom and her children enjoying the pool during a Family Swim session.

“Mary was instrumental in opening those acting and technical doors,” Mindy says of Mary mentoring her in all-things theater and film. Along the way, Mindy met other people who served as theatrical mentors. This eventually led her to the technical side of the stage.

Lighting intrigued her, and she became a spotlight operator at American Music Theatre (AMT). She was in seventh heaven, working 65 feet above the stage operating the spotlight. She also did some backstage work and stage management, as well as general crew work.

Ten years in, physical ailments began to plague her, and it became obvious a change in careers was necessary. “What do I want to do the rest of my life?” she asked herself. One of her criteria in searching for a new career was to help people in some way.

Always a very active person, she decided to pursue a lifeguard certification. “I was the oldest in my class at 46,” she recalls. She credits receiving her certification to a supportive instructor and hard work. 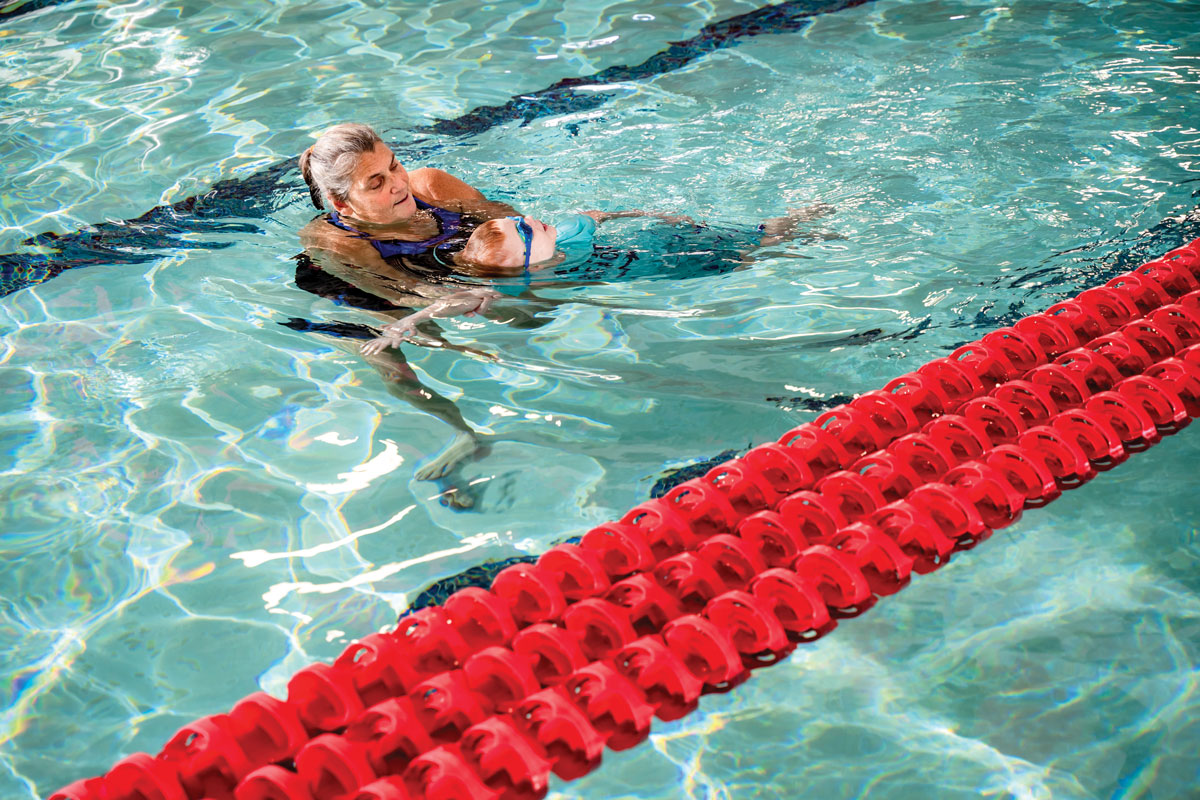 More mentoring by caring people led her to the Hempfield recCenter, where she achieved the other required certifications. Mindy reflects, “All through my professional life, I always had people who believed in me, saw a spark in me and were there when I needed them.”

“I care about all the people I teach,” Mindy confides. Her exercise classes promote socialization, laughter and bonding as a group. She entertains her fitness classes with weather predictions (she is a bona-fide weather geek), tales of her shelling expeditions (she says she earned her conchology degree from the Outer Banks), and stories from AMT (she once took Billy Ray Cyrus’ band kayaking on the Susquehanna River).

She refers to herself as a “tribe” person. “We are a team here at Hempfield recCenter,” Mindy says. She credits executive director, Jeff Book, business manager, Cherie Sidoti, and her boss, Deb Pelen, for not only supporting her but encouraging the “madness” that is Mindy. “I am grateful and so blessed to be doing what I do,” she says.

Her advice for all to heed is, “Keep moving, keep moving.” In fact, she credits that mantra for helping her to recover from knee-replacement surgery in November 2018 and return to the pool three months later. She firmly believes water exercise is a lifetime endeavor. While it provides a cushioned environment, water nonetheless allows for aerobic and strength-training exercise. “There’s no way I could have returned so quickly if I worked on land,” Mindy points out.

For more information, visit Hempfieldrec.com. On March 16 (7-8 p.m.), Mindy will present the program, Shell and Tell, which will delve into her hobby of 10 years. The program is free, but registration is requested. Call 717-898-3102.

Mindy’s past experiences as a writer, actor and stage hand have meshed with her love of aquatic activities to create a multi-faceted “third act” that entails lifeguarding, teaching and managing the East Petersburg Community Pool in the summer. Her love of the water flows into her leisure time, as she is an avid shell collector and kayaker.