Over-the-road truck drivers know how grueling and isolating life on the road can become. Francisco Ostos and his family can attest to that. After seven years of driving, Francisco needed a change. Going all in, Francisco and his wife, Julia, bet on themselves for the sake of their family. 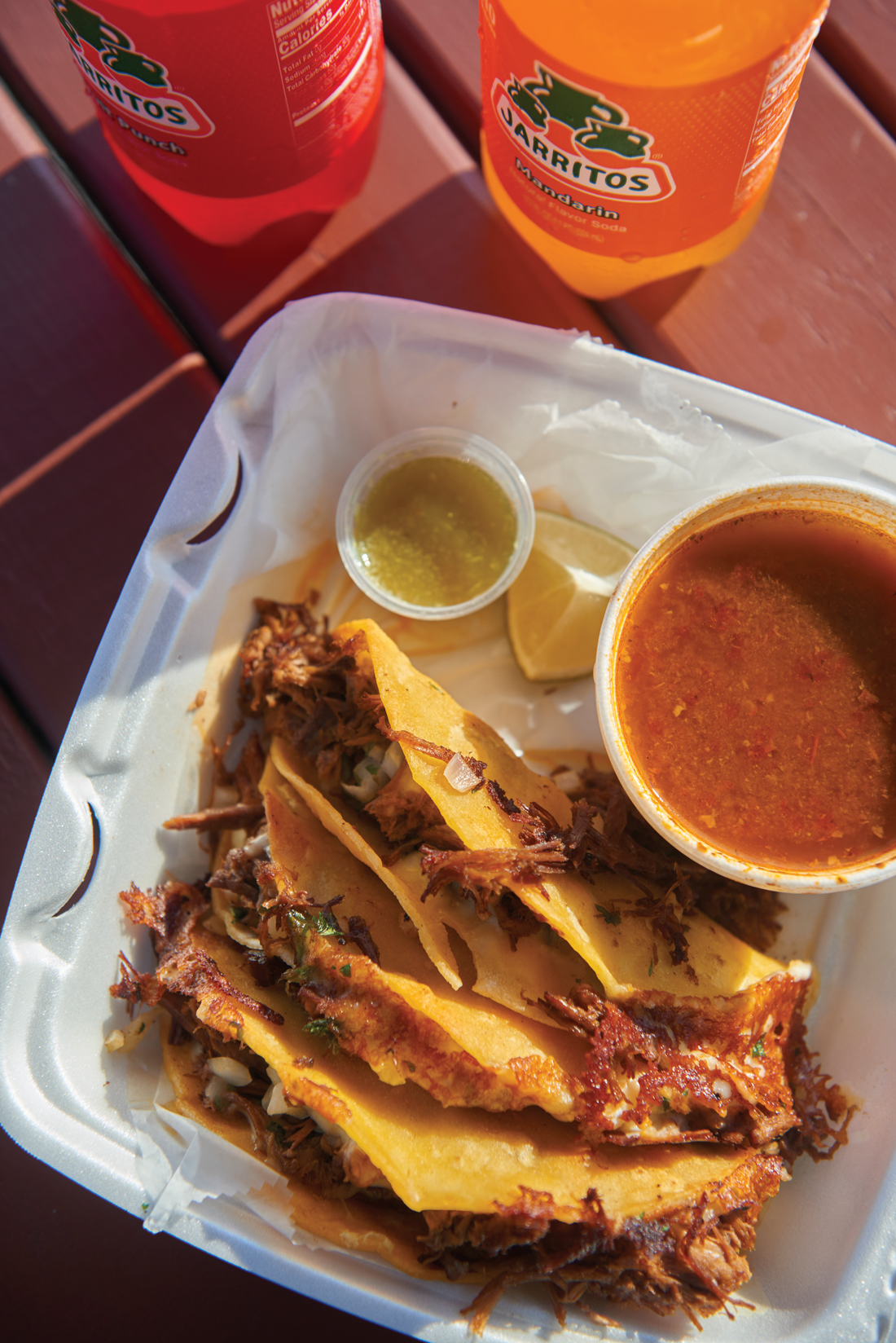 A real crowd pleaser at Tacos El Gordo is the Quesabirria: three shredded beef (birria) tacos, cheese, cilantro and onions, served with a cup of consommé, lime and salsa verde. Dipped in the savory consommé, the tacos are crunchy, chewy and dripping with flavor.

Francisco and Julia Ostos never imagined they’d own a business in food service. Francisco goes a step further, sharing that he always swore he would never work in a restaurant. His life’s journey started in Mexico; his family moved to the United States in 1997, when Francisco was 13. Settling first in Texas, the family moved to Reading, Berks County, where Francisco graduated from high school. He found a job working as a supervisor at the ACME Warehouse in Denver. Through his warehouse position, Francisco became acquainted with truck drivers. Intrigued, he would ask them questions about their jobs. At age 30, Francisco got his CDL. One of his regular routes was transporting mushrooms from Kennett Square to a distributor in Chicago. In the summer, Julia and their two kids, Francisco Jr. (Gordo) and Alexandra, would ride along.

In the winter of 2021, Francisco’s transportation contract was expiring. “You make good money, but you never see your family,” says Francisco of the job. With every Thursday and Friday off, regardless of the holiday or life event, “We had to do birthdays on my day off,” he says. 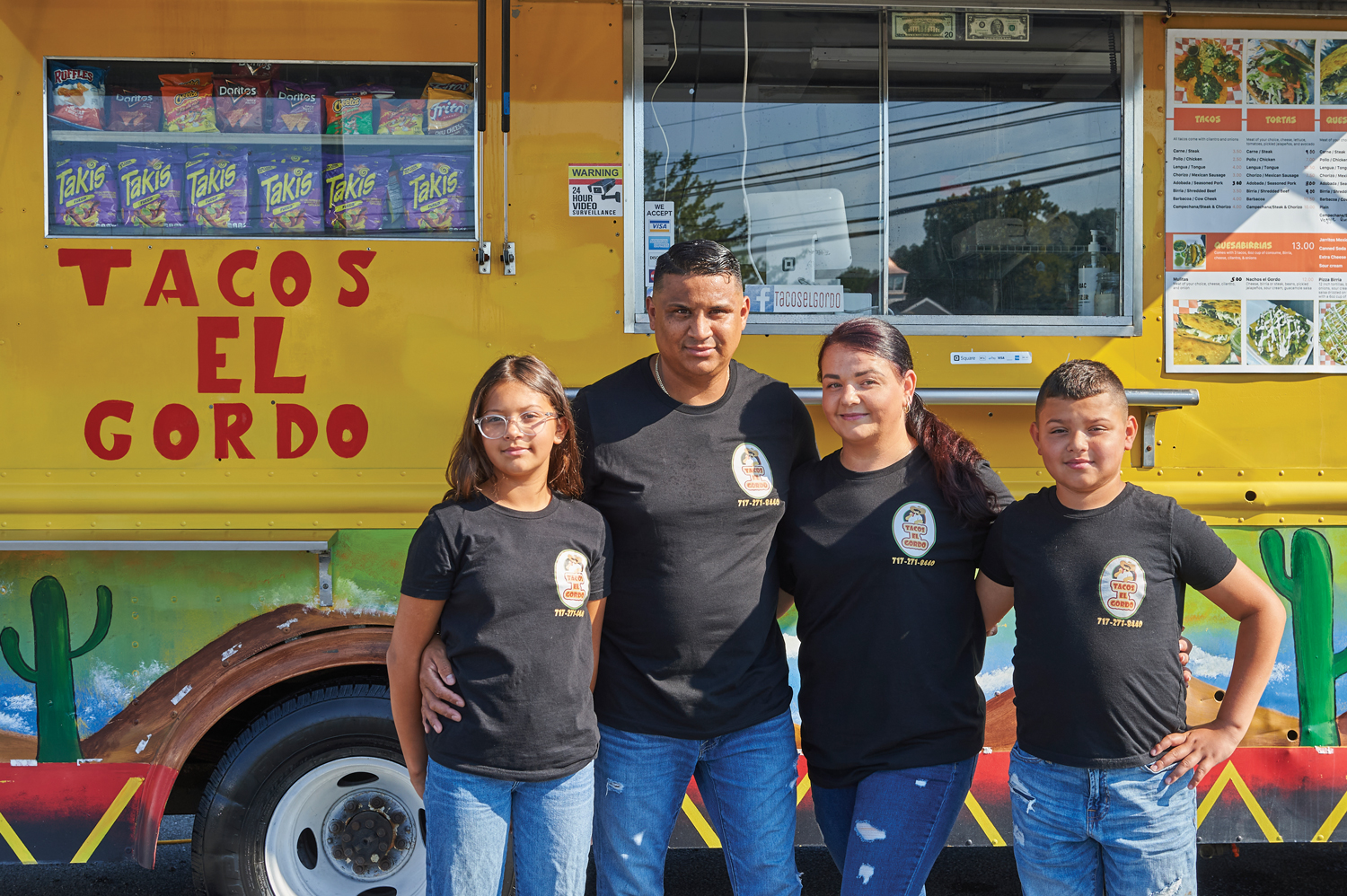 One of his friends, José Tinoco, owner of Taqueria El Carreton in Reading, asked, “What are you going to do with your life?” Francisco wasn’t sure, but he needed to make a career change. José suggested that Francisco buy his unused food truck and start a business. That night, Francisco went home and awakened Julia, exclaiming, “I bought a food truck!” She replied, “You’re crazy; it’s late, go to bed!”

The next morning, Julia asked, “Were you serious about what you said about buying a food truck?” That’s when Francisco shared with her that he had committed to purchasing the truck for $25,000. “How are we going to pay for it?” asked Julia. “Work, work, work,” Francisco replied. “Trust me, we’re going to do good,” he added. “It was his idea, 100%,” she recalls. “I was scared, I won’t lie.” Together they went to look at the truck, which needed quite a bit of TLC, having sat idle for five years. It had a flat tire and the engine didn’t start. 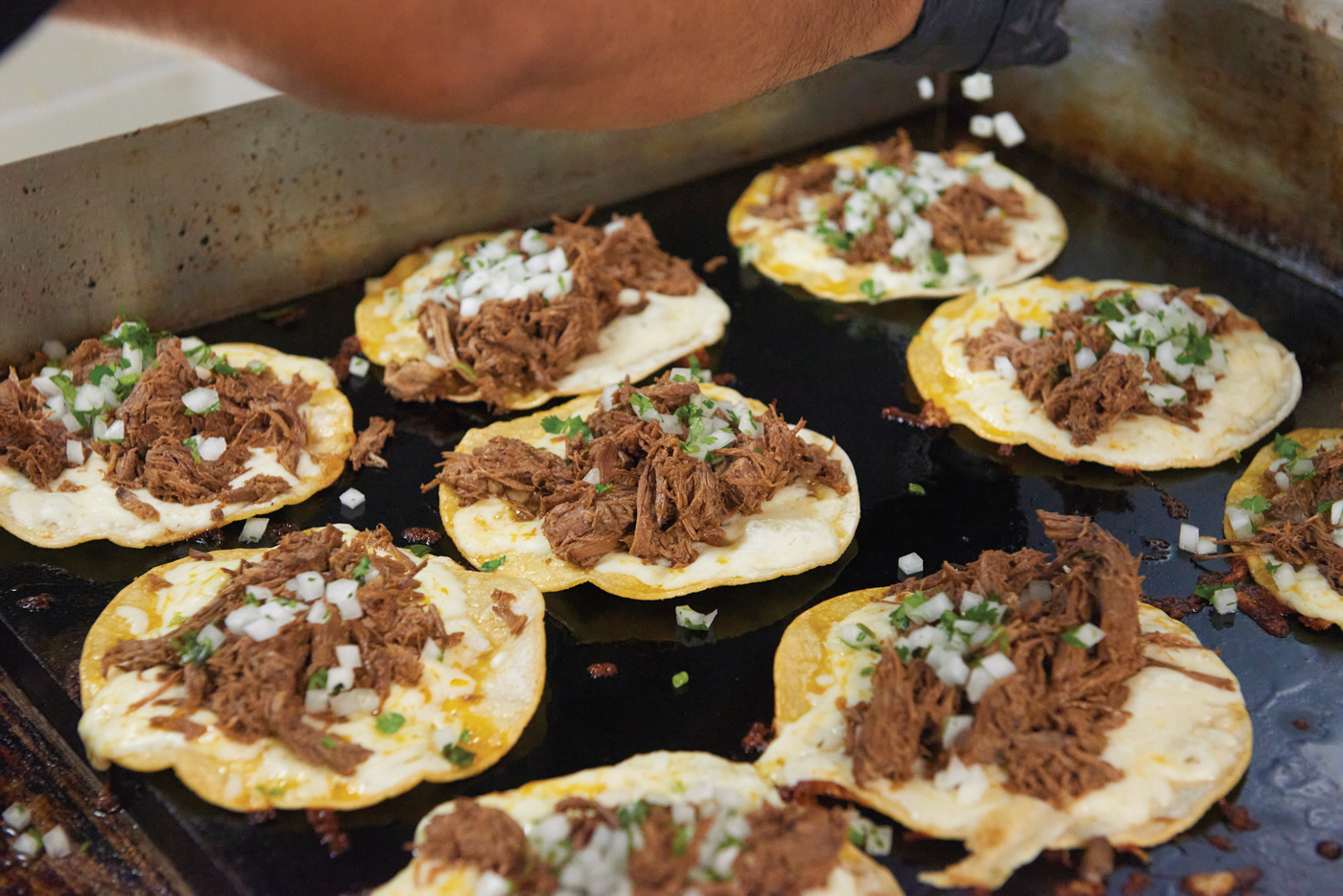 Quesabirria is made with shredded beef, cheese, cilantro and onions.

The condition of the truck wasn’t the only problem the Ostoses faced. Francisco had never cooked before; in fact, for most of his life, he hated cooking. But he was hungry to learn, to be present with his family and to gain financial independence. Immediately, he asked his mother and sister to teach him recipes, plus they helped prepare food in a leased commercial prep kitchen in Reading.

They also needed a name for their venture. Francisco is originally from Ciudad Juárez in the Mexican state of Chihuahua, and he briefly considered using the namesake breed of dog for their logo. That didn’t quite fit and he landed on Tacos El Gordo, named after the endearing and affectionate nickname, “Gordo” given to their son, Francisco Jr. Loosely translated, “gordo” means fat or chubby.

When the truck was tuned up and given a fresh coat of paint, the location where it would park remained in flux. Initially, they planned to park near the town of Stevens, but a $5,000 permit that required the assistance of a lawyer was too big of a bite, especially considering the expensive application was devoid of a guarantee. 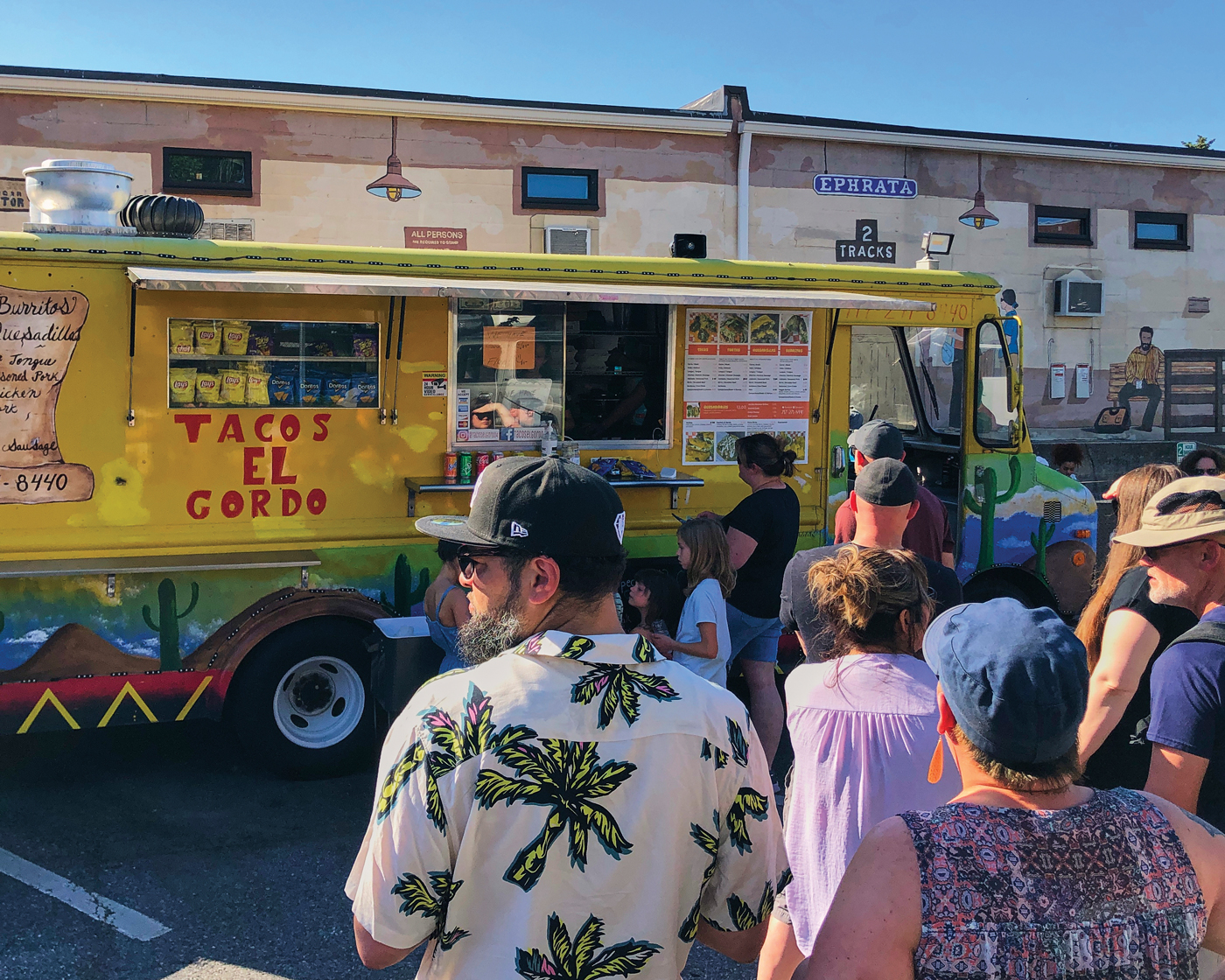 On June 4, 2021, the day Tacos El Gordo got its food license, the food safety inspector mentioned an idea for a possible location: the old Kmart parking lot in Ephrata. Good’s Store had just acquired the property in March, so Julia started calling around. Eventually she got in touch with Ken Burkholder, the store’s president. After considering their request for two weeks, Julia got their answer: “Alright, let’s give it a try.”

For their first week of business in July 2021, Tacos El Gordo stocked 100 pounds total of steak, chicken and chorizo. They were all-in on their venture, investing everything they had, with just $300 left in cash-on-hand and a growing pile of debt to leverage the equipment they needed to operate. Joyfully, their first day – July 10 – was met with long lines of hungry customers, as Francisco hustled to get the word out early with advertisements, flyers and telling everyone he could that their food truck was coming. 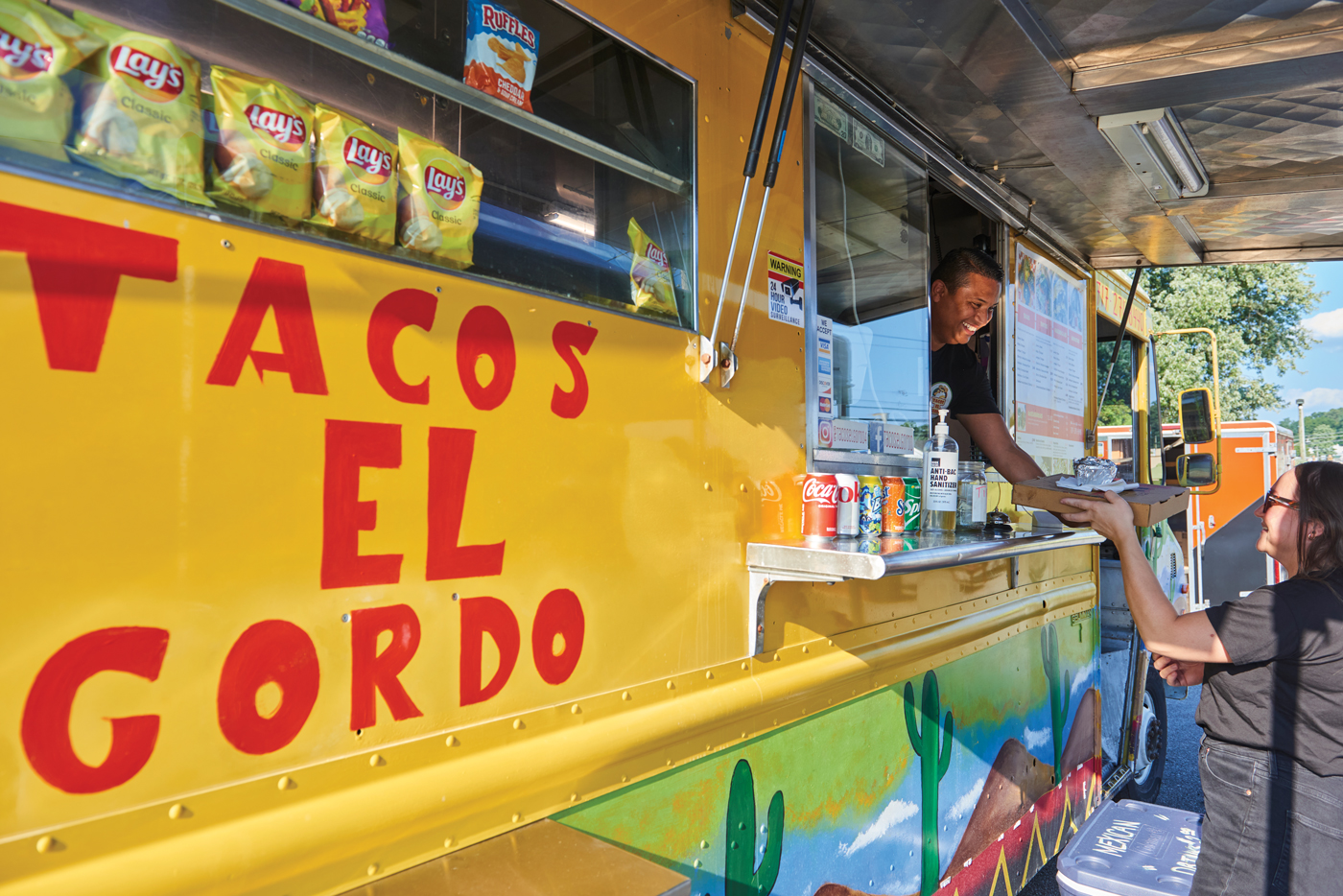 Francisco Ostos hands an order to a customer.

Before opening, Julia joked about how incredible it would be that they could close that day at 2 p.m. The reality was not so different: by 3 p.m. the Ostoses had sold out of food. The lines continued to grow each day, as they dialed in their workflow, recipes and inventory. A year later, in addition to chorizo and chicken, they now prepare 500 pounds of beef and 200 pounds of cheese in a week. They use two gallons of salsa on a daily basis, with the recipes prepared by Francisco’s mother and sister.

For most of their first year in business, Francisco would make two trips to Reading every day to pick up more supplies, drinks and food for the truck. The days were long, even as they grew short. In the winter, Francisco shoveled snow in the dark parking lot as early as 5 a.m. He installed bright lights on top of the truck to illuminate the pavement for spreading bags of salt. Around 6 p.m., they’d start washing dishes and cleaning equipment. After their 7 p.m. close, they would purchase food that was needed for the next day and start prepping it. At 11 p.m., they started restocking the truck. Despite the long days, they were together as a family and were constantly making improvements, both logistical and personal. 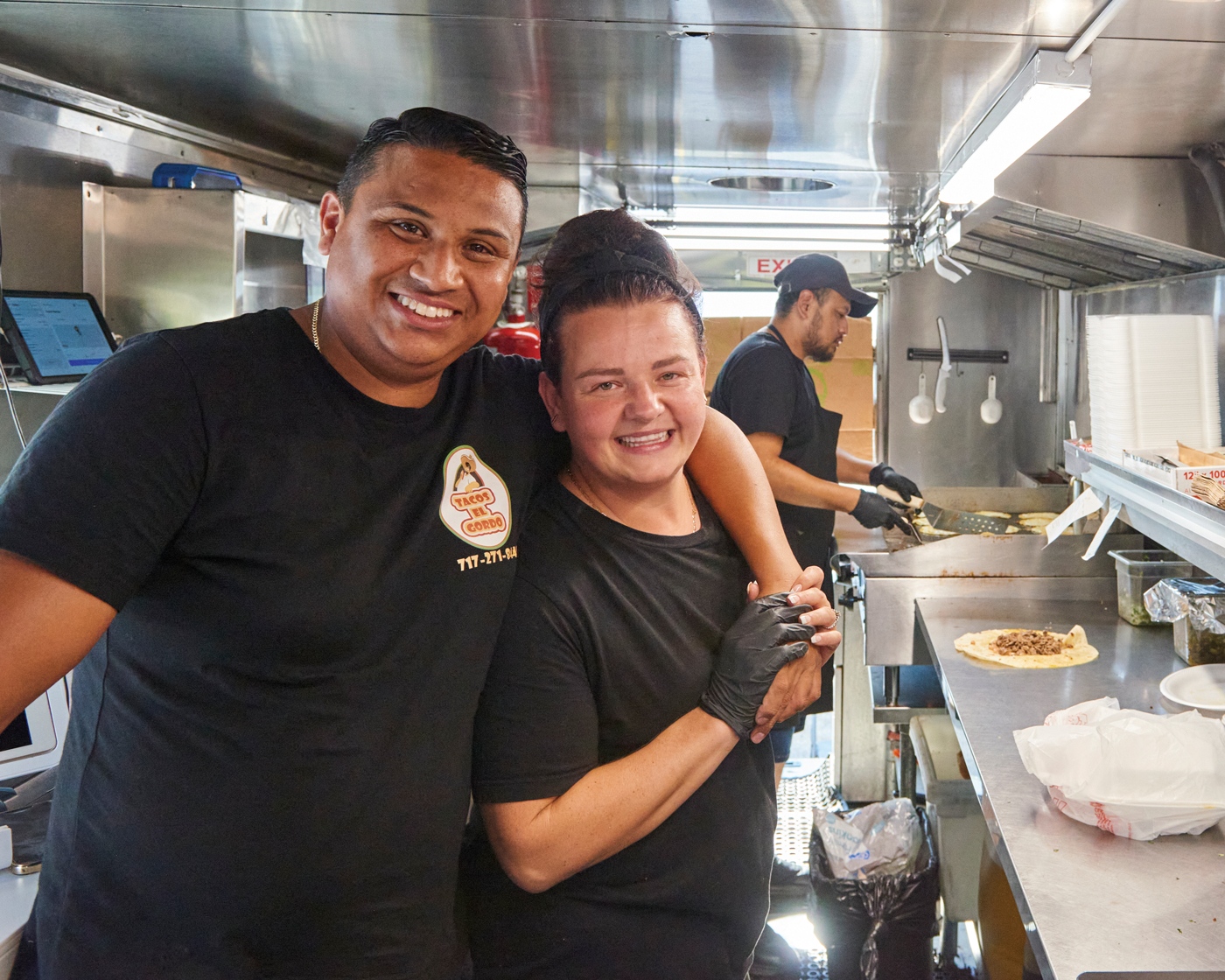 Encouraged by the success they achieved in their first year, husband-and-wife duo, Francisco and Julia Ostos, are making plans for future expansion.

As for Francisco’s new take on cooking, he shares, “Everything I hated doing, I now do with love.” Citing their customers as the basis of their success, he says, “The people make me. We have people coming from Maryland, Philly, West Chester, Harrisburg, Lebanon, York and Hamburg. I’m living my dream,” he says. Without missing a beat, Julia adds, “Busting his ass.” Francisco proudly recalls one customer who drove from Maryland for the express purpose of ordering a Quesabirria taco. According to Francisco, she said, “It better be good, I drove three hours to get here.” Satisfied, she ordered five more to take back to Maryland and has become a regular customer among many.

When Tacos El Gordo added outdoor seating, customer relationships immediately grew. “We could get to know our customers more, who is who,” says Francisco. Their extended family would come to spend time there talking and enjoying being together, including Julia’s 85-year-old father, who has at times been recruited to fill containers with salsa.

Part embarrassed and part honored by the business’ name, Gordo and his sister, Alexandra, contribute, too. Alexandra helms the register that’s managed on a digital tablet, while Gordo brings orders to cars, restocks the coolers and makes sure the area is clean. They’re both learning the value of their hard work and realize that if there’s something they want, they know how much they need to work to earn it. According to Julia, both kids are developing business sense, even a sense of ownership of how food should be cooked and presented. “Alexandra knows how food should look,” says Julia. “She’s amazing.”

Before they knew it, a year had passed. The development of Good’s Store building got underway. Ken Burkholder took the time to reach out to the Ostoses and congratulate them on the first anniversary of signing an agreement to set up in what was essentially Good’s Store’s parking lot. Later, as a café at the adjoining Dutch-Way Farm Market became part of the company’s plan, Tacos El Gordo knew they would need to move. Ken Burkholder didn’t want to see them leave the area, so he helped them secure a new location on the other side of Rothsville Road from the store. “We owe him so much,” says Julia. “He grew so much trust in us; he enabled us.” 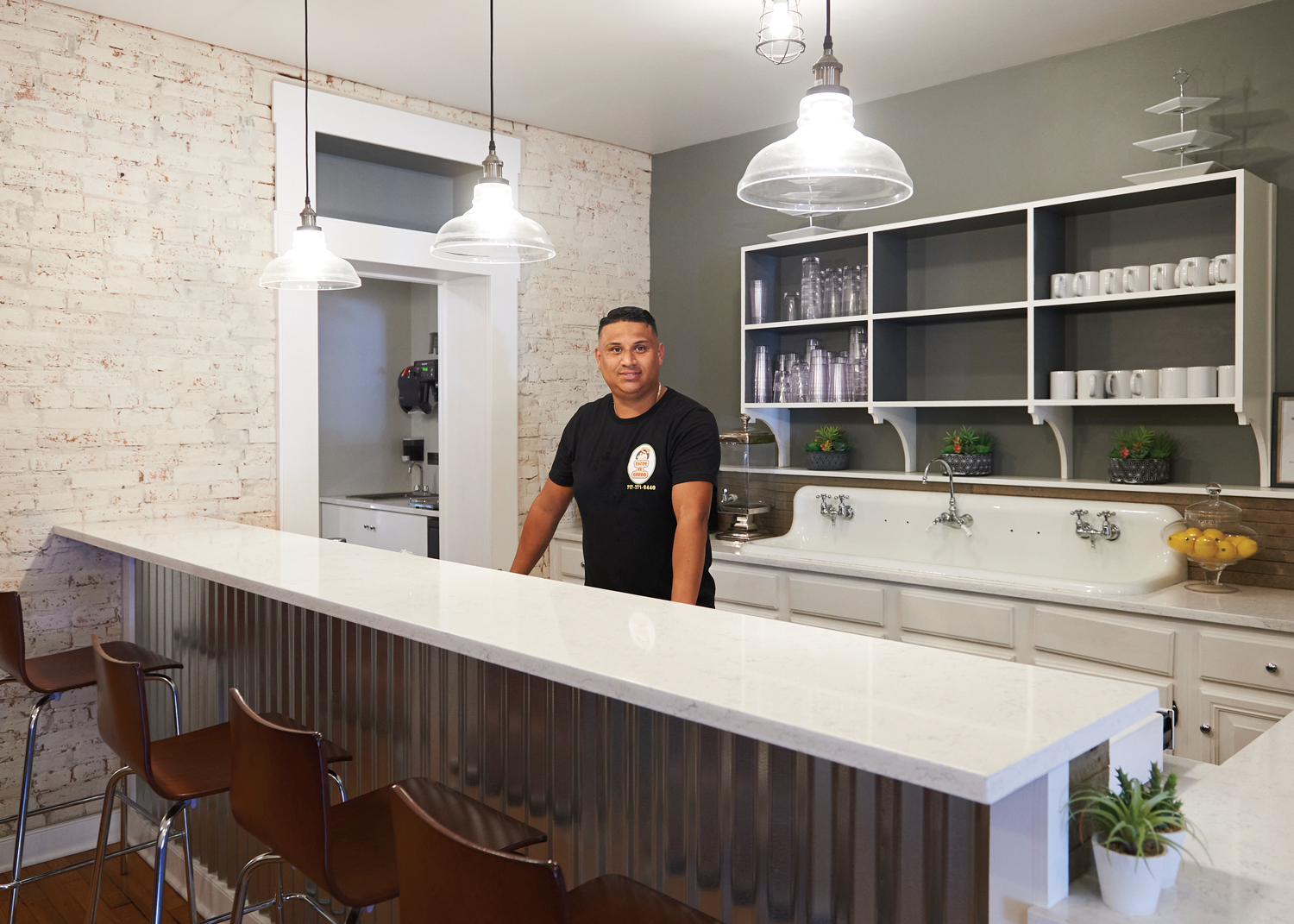 Francisco Ostos at the upcoming Tacos El Gordo restaurant in Downtown Ephrata. This location currently serves as a prep kitchen and will continue to support the food truck when it opens as a restaurant.

Looking to relocate their commercial kitchen from Reading, Francisco and Julia were fortunate to find a restaurant space in Downtown Ephrata, minutes from their food truck. The new kitchen space eliminated hours of daily travel to their Reading-based kitchen, thus saving them time and fuel, while providing cold storage for larger quantities of food. Having inventory nearby ensures the truck is well-stocked and doesn’t sell out on busy days.

As for future plans, the Ostoses intend to eventually open the space as a restaurant once they have enough staff trained and can trust them as stewards of their dream. For now, “The food truck is the priority,” says Francisco. He and Julia are committed to their beloved food truck and even dream of one day expanding to Lancaster City, Reading and beyond. 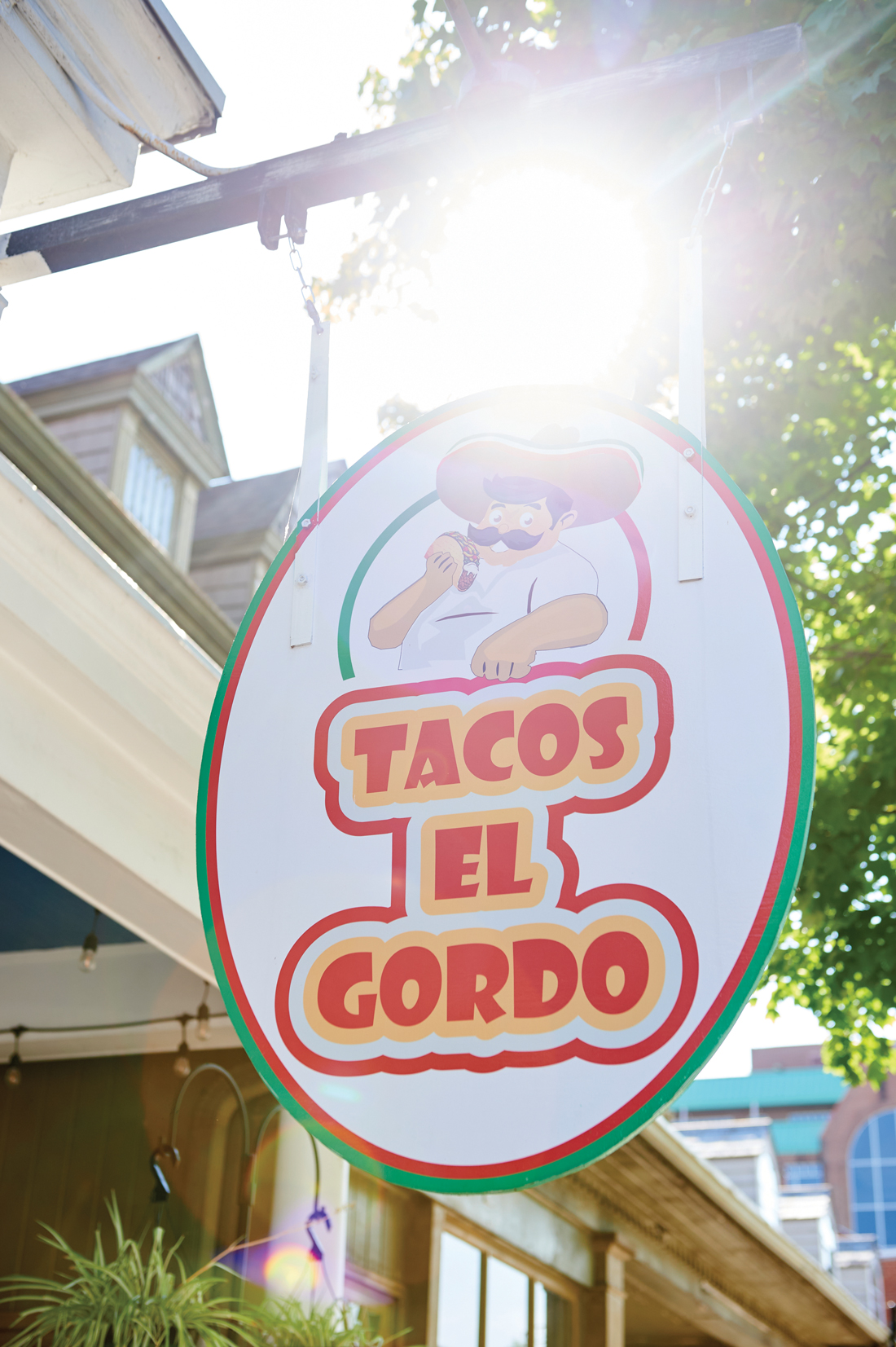 The commitment to the food truck is evidenced by the fact that after moving to their current location on Rothsville Road, they signed a three-year lease. They added shaded picnic tables to the enterprise and it’s not uncommon to see one of the Ostoses bringing food out to diners. That they could currently operate their business from a restaurant space instead of their food truck underscores their commitment to the experience, convenience and speed of service their customers have come to appreciate. The restraint they show in not growing too quickly has ensured they will be prepared for each new step along their road to success.

You can find Tacos El Gordo at 3609 Rothsville Road, Ephrata. For more information, call 717- 271-8440 or visit Facebook and Instagram @tacoselgordo4.