Fall is a great time to hit the road and treat yourself to a relaxing long weekend. Fall foliage, cool temperatures, fairs and festivals … there’s so much to enjoy this time of the year. And, you don’t have to travel that far to get away from it all. The Poconos, for example, is a three-hour drive from Lancaster. That area has always called to us, but our travel plans just never seemed to lead in that direction. Thanks to a trip we made this summer, we can finally say we’ve been to the Poconos!

It seems we’re not the only ones from Southeastern Pennsylvania who heard the Poconos calling. A group of Friends from Philadelphia were also looking for a relaxing place that offered a natural environment and was conducive to their Quaker way of life. On December 30, 1901, a meeting was convened at the Twelfth Street Meeting House of the Society of Friends in Philadelphia to discuss the purchase of a tract of land on the crest of Little Pocono Mountain. By April construction had begun on the oldest sections of what is now The Inn at Pocono Manor.

In August of that year, the first guests arrived at the 65-room inn. Since then, many other inns and resorts have come and gone in the Pocono area, some leaving no trace of their existence. Pocono Manor, however, has withstood the test of time, earning the name “Grand Lady of the Mountains.” It’s even included in the National Registry of Historic Places.

While the inn is at the heart of Pocono Manor Resort & Spa, the 3,000-acre property is host to a variety of activities. Most famously Pocono Manor hosts two beautiful 18-hole golf courses. The East Course opened in 1927 and has hosted a variety of famous golfers, including Arnold Palmer. The second course was opened in 1959. In that same year, Alex Wall Jr. won the Masters and was named the PGA Player of the Year while representing Pocono Manor as their touring professional.

Near the golf course you will find a fully equipped fitness center, as well as a very versatile shooting range. If taking in the scenery is more your thing, the Ranch offers a variety of horseback tours around the property. We chose to take off on foot and followed the blue trail, which led to the beautiful Swiftwater Creek waterfall on the property. Next time we’ll probably check out the ATV trail tours for a little more speed.

If rest and relaxation are your goal, the property boasts a world-class spa. A swim in the outdoor pool is refreshing during the summer season (it’s flanked by a small tiki bar, as well as a fire pit, where other guests congregated to roast marshmallows throughout the evening hours).

With so much to do at Pocono Manor, we didn’t even get a chance to explore the surrounding area. I’m sure we’ll get the chance, as we plan on returning to take advantage of the changing seasons. I look forward to seeing the trails change color into autumn, as well as hitting the nearby slopes in the winter. Look for a feature story next summer. 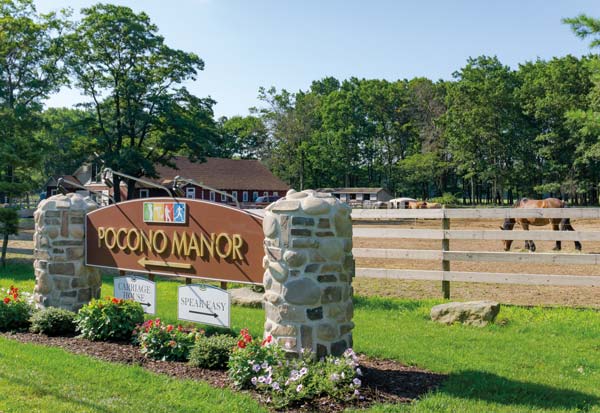