The chances of having a local player make an Olympic team that is comprised of only 16 members are rather slim, but to have two local players make the team is incalculable! But, Lancaster has achieved the impossible, as Jill Witmer and Alyssa Manley are members of Team USA.

Currently, Team USA is ranked fifth in the world by the International Hockey Federation (FIH). The Dutch women, who won the gold medal at the 2012 London Olympics, are ranked in first place. They are followed by Argentina, Australia and New Zealand. Behind the United States are the teams from China, Great Britain, Republic of Korea, Germany and Japan.

Olympic competition will feature 12 teams divided into two pools. Team USA will be competing in Pool B. Each team will play every other team in its pool. The four top teams from each pool will advance to the quarter-finals. The four winning teams will then advance to the semi-final rounds. The two winning teams will play for the gold and silver, while the two losing semi-final teams will vie for the bronze. The Games will be aired on NBC and its affiliate stations.

Now, the two are Rio bound. The nerve-racking months of not knowing if they would make the team are over for the players and their families. The coaching staff had to pare the roster down to 16 (with two alternates) by July 1. “Both of those guys will be pushing very hard for selections, I’m sure,” coach Craig Parnham told LNP reporter Diana Pugliese in early May. “Jill’s been somebody that joined me on my very first trip when I arrived in February of 2013, and she’s developed and progressed significantly over the last three years. I’m really pleased with how she’s developed and the way she’s playing now. She’s got a much greater understanding of the game and is starting to develop into a fine player.

“Alyssa has had less exposure with the group but has still played in some major events over the last couple of years,” he continued. “Even though she’s very young, she’s starting to be much more experienced at playing at a high level, and she’s progressing very nicely.”

Jill Witmer was determined to be a soccer player. Noting her athleticism and speed, her parents, Lew and Judy Witmer, encouraged Jill to give hockey a try. “That was in eighth grade,” she recalls. “I hated it. I didn’t understand the rules, and the stick just felt foreign in my hands. I cried a lot. I wanted to quit, but they said I had to finish the season.” She adds, “I’m so glad I listened to my parents!”

Then, as things often happen, something just clicked. Jill, who is a forward, began to “get” hockey. It also helped that there was a barn on her family’s farm that had been turned into a gym and had a turf surface (indoors) that was conducive to playing hockey. “My dad’s boss’s daughter used it,” Jill explains, adding that several club teams utilized it as well, hence she was able to fully absorb the game and meet and learn from area coaches. She tried out for Penn Manor’s junior varsity team her freshman year and, to her surprise, made the varsity squad. Penn Manor became a powerhouse and won the state title her junior year.

Division I college teams courted Jill, and she ultimately chose to play for the University of Maryland. The Terrapins won national titles during her freshman and sophomore years. “And, we won two or three ACC titles,” she says of her college career.

Jill also set a precedent while at Maryland by being named to the United States National Field Hockey Team (very few college students are named to the team). She made her debut in the first round of International Hockey Federation’s World League tournament, scoring her first goal in round two over Trinidad/Tobago. She hasn’t looked back, appearing in more than 50 international competitions, the most recent being the Champions Trophy, which was contested in London in late June (during the Brexit vote no less). Team USA came away with the bronze medal, besting Australia in a draw after the game ended in a 2-2 tie. It was the first time in more than 20 years that the team made the medal round of the tournament. A year ago, the team took the gold at the Pan American Games by defeating Team Argentina.

Jill encapsulates her hockey career with one word: “Amazing!” She loves traveling to international competitions. “Sometimes we don’t get to see a lot,” she says of the sights. “But, it’s so interesting to experience the different cultures. And, the food! The fruit is so fresh! We had the most amazing fruit in Brazil.”

But, it’s always nice to come home. Jill is proud to call Spooky Nook her home turf. “The Nook is unbelievable,” she says of the training facility. Being close to home means Jill can spend time with her family. “There’s nothing like home cooking,” she says. And, it seems the Witmers have played a role in making Team USA feel right at home in Lancaster County. “We sometimes have parties at my aunt’s farm,” Jill notes. “One time we had a clay pigeon shoot. It was the first time a lot of the girls shot a gun.”

Like Jill, Alyssa Manley began playing hockey as an eighth grader and made hockey history when she was named to Team USA as a collegian (and just in time to play in the Pan American Games in 2015 during which she scored the goal that propelled the team to the championship game). Alyssa was not only a standout hockey player at Warwick, but she was also a heralded lacrosse player.

The midfielder, who plays the screen position for Team USA, took her talents to Syracuse University. The accolades she earned during her collegiate career are countless and include serving as the captain of the 2015 team that won the university’s first national championship (Alyssa scored seven goals and provided seven assists during the tournament). She was also honored as the ACC Defensive Player of the Year and was a First Team All-American.

Alyssa was also the recipient of the 2015 Honda Sports Award, which qualifies her as the only Syracuse athlete (in any sport) to win the prestigious award. Winning the Honda qualified her as a contender for the Collegiate Woman Athlete of the Year Award. Alyssa was unable to attend the festivities that were held the last weekend in June in Los Angeles due to the fact that she was playing hockey in London. (The winner was basketball star Breanna Stewart of UConn.) Still, Alyssa’s college coach, Ange Bradley, is incredibly proud of her protégé. “Alyssa is so hardworking, humble and quiet,” she told ACC.com. “She’s always been the type of leader who leads by example. This year it was really fun to see her find her voice and have moments of ‘we need to do this’ or ‘this needs to change.’ When Alyssa spoke, people listened.”

Field hockey is one of the oldest sports in the world. In fact, it is regarded as the oldest involving a stick and ball and can be traced to Persia and ancient Greece, where animal horns were utilized as hockey sticks. It is believed the word “hockey” is derived from the French word “hocquet,” which translates as shepherd’s hook.

England fully embraced the sport, where it became popular in 18th century public schools, rivaling rugby and soccer.  A century later, professional teams for men emerged. Women also became fully involved in the sport and clubs such as the Molesey Ladies (1894) and the Irish Ladies Hockey Union (1897) were formed. The British Army further helped to spread the popularity of field hockey by introducing the game to the far corners of the world. As a result, India became a powerhouse in field hockey.

The 20th century saw field hockey become an Olympic sport. The men took to the field for the 1908 London Games. The sport was dropped in 1924 but was reinstated four years later. India ruled the field, winning the gold in every Olympics up until 1956. Pakistan dominated the 60s, while Australia, Germany and the Netherlands began their winning ways starting in the 70s.(Unfortunately for the U.S., the men’s team did not qualify for the Games in Rio.)
Women’s field hockey made its debut as an Olympic sport during the Moscow Games of 1980, which was boycotted by 65 nations, including the United States. Team Zimbabwe won the gold that year; since then, Germany and the Netherlands have dominated the field.

However, the American women have been making great strides. Credit for that goes to Title IX, which put women on a level playing field with men in all scholastic and collegiate sports as of 1973/74. According to Team USA’s website, “The strength and popularity of field hockey at the high school level is reflective of the impact Title IX has had on women’s  sports.” The numbers are telling: Since 1973/74, participation in scholastic sports by girls has increased by more than 250%, while participation by boys has only grown by 12%.

Field hockey is a reflection of those stats, as it is played by more females in the United States and Canada than any other sport. It’s one of the oldest college sports for women in the U.S. and is now played at 250+ colleges and universities. It has become a very lucrative sport for female hockey players, as more than 1,200 scholarships are made available by Division I and II schools.

Now, Lancaster is playing a role in taking field hockey to an all-new level with the Spooky Nook Training Center that is home to Team USA. “This has been such a gift,” says Kait Mitchell, the team’s communications manager. “Before, we had to piecemeal training sites together. Now we have this beautiful facility,” she says, referring to fields, a gym, a dining facility and a hotel all located on a campus-like venue. When Team USA is in Colorado Springs or traveling abroad, Spooky Nook is made available to tournaments and clinics.

The fact that the team is so accessible for post-game autograph sessions and the like, makes their smallest fans dream of bigger things to come.  And, bigger things are to come. Next August, the Pan American Cup for men and women – a qualifier for Worlds – will be held at Spooky Nook.

And, as with most sports, shopping has entered the picture. Earlier this year, LAX World/Field Hockey World opened at 896-F Plaza Boulevard (Park City area). The store carries equipment, apparel and supplies for both lacrosse and field hockey. Founded in 1988, the store, which is among 16 nationwide, represents the company’s first venture in Pennsylvania. 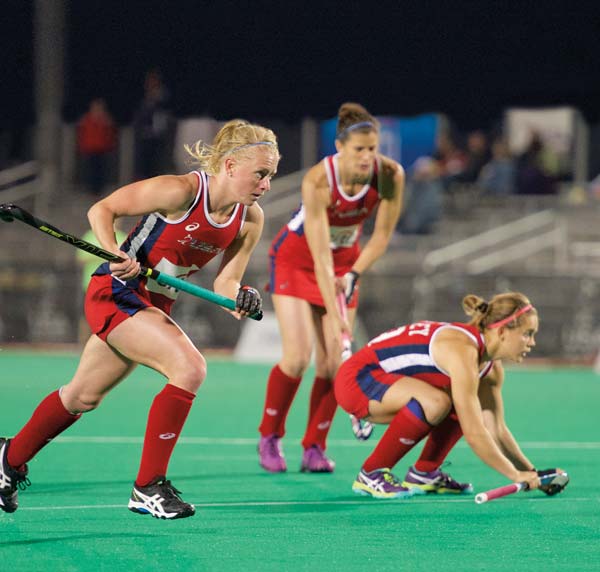