“Don’t cry over spilled milk … it could have been beer!” reads the sign positioned directly over the stove in Kurt Fichthorn’s beer kitchen. 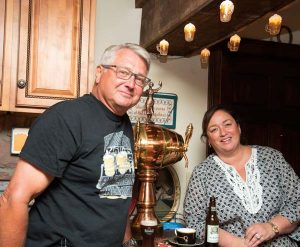 Stepping into Kurt Fichthorn’s home is a treat in itself. The circa-1841 farmhouse is like a local historical preserve. Once an active horse farm owned by Kurt’s great-uncle Dan, the property, tucked away amid new development in East Cocalico Township, was once a bustling apparatus of early community, drawing neighbors to its harness-racing track.

The home, which has been meticulously restored and updated (it won a C. Emlen Urban restoration award from the Historic Preservation Trust of Lancaster County), retains the character and charm of a mid-19th century dwelling. It’s the sort of place where the gardens smell like lavender, fresh roses stand in a vase in the dining room and an uber-friendly golden retriever, King, serves as official greeter to this iconic snapshot of serene life.

However, I was here for the beer.

Now retired, the former consulting actuary of 40 years started homebrewing many years ago, when he “was young,” he says. Kurt opens the book in which he records all his brews and pinpoints it to December 1987. Like what happens with most hobbies, brewing eventually fell by the wayside. For a time, work and family replaced barley and malt, but there was always a lingering interest in brewing.

Then, his wife, Tracy, got him a Christmas present, the Daisy Red Ryder bb gun of home brewing. “I recreated the monster,” says Tracy, as we pass her on our way downstairs.

How the Fichthorns came to reside in the family farmhouse was a story uncovered in the April 2009 issue of Lancaster County magazine. The story ends with Kurt hinting at turning an unfinished room off of the garage into a beer kitchen. Well, he’s done it. The space was completed in January 2016, and he’s been brewing recipes one after another ever since.

Stepping into Kurt’s beer kitchen is like being transported into another world – a world of beer from yesteryear. Reminiscent of the dark but neon-lit basements familiar to Generation X as the places where their grandfathers would hang out and swap old stories about the Great War, Kurt’s beer kitchen differs only in modernity, as a selection of digital music pumps through unseen speakers. Kurt’s room isn’t dark either, but it does have that secluded, comfortable feel – complete with neon signs, old beer coasters and breweriana of all makes and styles. I’m instantly traveling down memory lane when I spot a trio of frogs on a lily pad croaking out Bud… weis… er. I laugh, remembering the popular 1995 commercial.

The decor includes “a lot of items that have a local connection or a connection with my family,” Kurt explains. He points to a Red Tips cigar box top hanging on the far wall. “My dad was a cigar smoker, and I enjoy cigars, too. My dad had that hanging at his farm, and after he passed away it was one of the things I picked up.” Framed auction posters for a carriage sale also hang on a wall. Kurt credits Tracy for finding a lot of the decorative items that fill the room.

A comfortable leather sofa and matching recliner take up the center of the room; Eagles fans congregate here to watch the games. There’s a card table, a humidor, and of course, a couple kegerators.

“Man cave is the common term, but my intent from day one was to use it for brewing; I call it the beer kitchen,” says Kurt. He even has a few shirts advertising Fichthorn Farm Basement Brew Works sitting around. 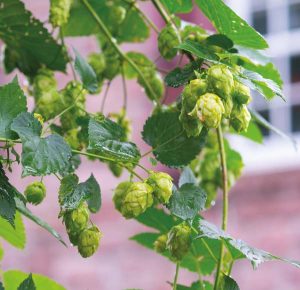 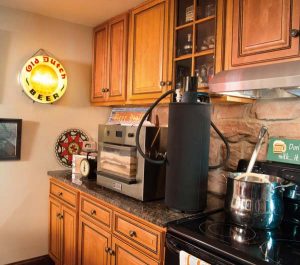 Brewing is part mechanical process and part art requiring attention to detail, an aptitude for science and mathematics, and patience. A basic outline of the brewing process can be summed up in eight parts. Step one, the grist, where malt is prepped for brewing to release fermentable sugars. The grist goes into the mash tun, where it is mixed with hot water. The next step, lautering, separates the sweet wort from the grain husks. The wort is then boiled. Enter hops, and the wort is cooled and filtered. Almost finished, the liquid is transferred to a fermenting vessel where yeast is added. Now it is time to be patient, wait, and let science take its course. Filter, carbonate and keg, and the beer is ready to be enjoyed.

This is an extreme oversimplification. Many other elements go into making different beers: lagers, for instance, need to be fermented differently from ales. Homebrewers use kitchen plastic buckets, glass carboys, and a slew of instruments to create their own beers. It is sometimes tedious work, but the reward, well, that’s self-explanatory.

Kurt is lucky enough to have a wife who buys wonderful gifts. Actually, the previous bb gun analogy from A Christmas Story doesn’t work well at all here. The PicoBrew Zymatic that Kurt received for Christmas is more like getting a cherry-red Testarossa with a big, red bow on top.

“The Zymatic is a computer-controlled piece of equipment. It’s a high-tech piece of equipment for homebrewing,” explains Kurt, understating the complexity of the professional brewing apparatus now living in his beer kitchen.

Billed as “the world’s first, fully automatic all-grain beer brewing appliance,” the Zymatic simplifies many of the tedious steps involved in making homebrew. The digital interface allows Kurt to scroll through a menu of recipes, standard brews provided by the manufacturer and some of his own he has loaded via Wi-Fi. He can check on a brew’s progress and tweak the process from anywhere in the world. He stops scrolling on Foxchase Porter, a traditional style beer he named after a local golf course.

It’s not like making instant coffee, but the days of lautering to strain out the wort from the grain are gone,” says Kurt.

The self-contained system makes it easy to proceed through each step and simplifies the all-grain brewing process. “It’s still quite a lot of time. You still have to have absolute, proper sanitation, which is the single biggest mistake homebrewers make,” says Kurt, whose beer kitchen is fully equipped with a stove, a double sink, various sources of clean water, a handy dishwasher and a refrigerator.

The cleanliness factor is part of the reason why he wanted his own kitchen. “I was always messing up the stove and counters in Tracy’s kitchen when I made my beer,” he explains.

The brewing process with the Zymatic takes about an hour. The product is chilled, yeast is pitched, and fermentation begins all within the same setup. Scales monitor the weight of the fermented beer and chart the specific gravity of the brew. Once it levels off, the recipe is done. Kurt does not filter his beer and carbonates the drink by forcing CO2 into the keg.

“You fill a keg with clean water to the volume that is prescribed by the recipe, put your ingredients in, select a recipe, and brew,” says Kurt. “It makes very, very tasty beer.”

But, Kurt is not beyond a bit of experimentation.

“Yes, I enjoy drinking the beer, but to me it’s about the process. I enjoy making the variety of styles and the control you have over the process,” he says.

He uses the stove to cook up a mash if he desires a higher malt content. He also likes to add special ingredients like freshly ground ginger or even quinoa as an adjunct to the traditional grain bill. “I like it as a dish, so I thought, ‘Hey, why not try it in a beer,’” says Kurt in all seriousness, referring to the quinoa. “The ginger is not to be confused with ginger beer; it adds just a hint of clean crisp flavor that I enjoy.”

One thing he never messes with is yeast. If a style calls for a certain yeast, he uses the proper yeast.

During my visit, Kurt is serving two big beers. Big beers are anything weighing in above 8% alcohol by volume. Total Amnesia (8.4 ABV, 80 IBUs) is an India Pale Ale made primarily with Cascade hops, not overly bitter, with a full-flavored, robust grain bill. Mind Eraser (9.0 ABV, 47 IBUs) is a strong porter made with Tettnanger, Kent Golding, and East Kent Golding hops. This dark beer is rich and malty, with hints of roasted chocolate and caramel. Both beers contain hops Kurt grows right outside his living room door.

His Double IPA is a crowd favorite, which heavily features his homegrown hops. Since creating his beer kitchen, his list of friends has grown. To meet demand, he keeps two 2-tap systems stocked with beer (plus a kegerator in the garage stocked with a common domestic variety). One features two choices from his notebooks of recipes, while the other is supplemented with Yuengling Lager and Yuengling Light, or maybe a local craft beer from a place like Union Barrel Works in Reamstown.

“I can’t keep up with demand, so to speak,” jokes Kurt, who spends a lot of his free time brewing in the beer kitchen. He brews seasonally, too, making crisp, lower-alcohol beer during the summer and hearty, dark beers in the winter. He doesn’t like brewing with wheat because it makes a mess of his equipment. He also doesn’t love the taste of the styles wheat produces: Wits, Whites and Weisses. That said, he’ll try anything brewed.

“When I go someplace that is serving a variety of beers, I try and drink anything I’ve never had before, and I typically won’t drink the same beer twice,” says Kurt.

As a result, Kurt does not have a favorite beer and although he tries to steer clear of fruit beers, I later found bottles of Kriek and Framboise – lambics made with sour cherries and raspberries – in the beer kitchen fridge. “I do like Belgian styles,” he admits.

When not in brewery mode, the beer kitchen is home to “typical man cave activities.”

“That’s the simple story of the beer kitchen,” says Kurt, as he taps a beer. 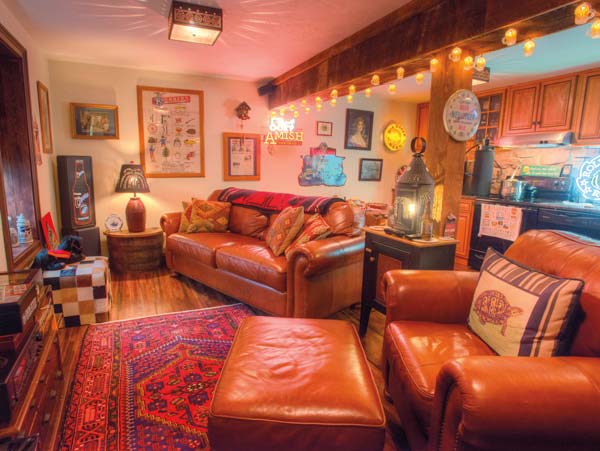