While Gary and Denise Brubaker love all the holidays on the calendar, Halloween sits atop the list. Actually, the Brubakers credit another holiday – Thanksgiving – for launching their odyssey of collecting all-things Halloween. 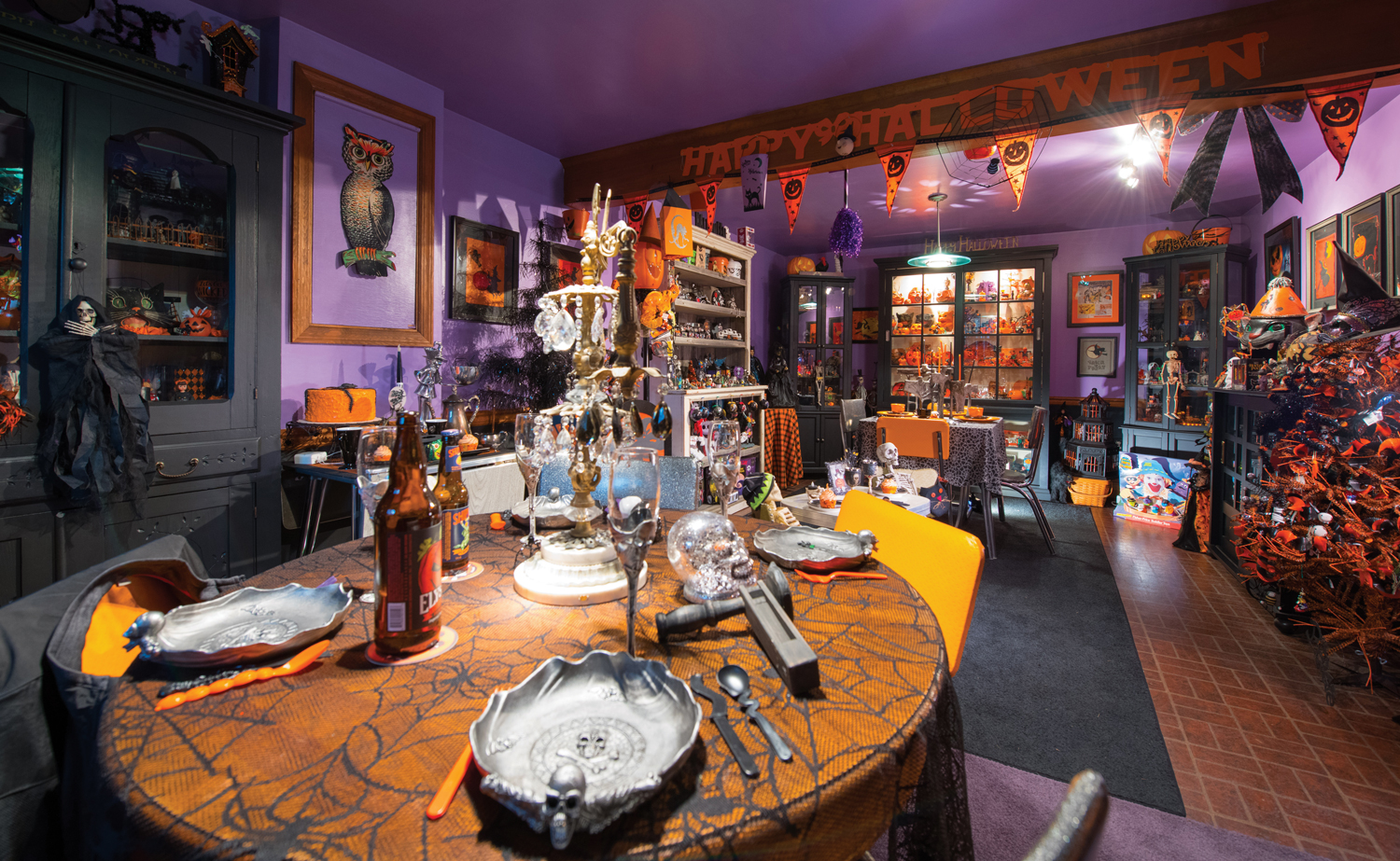 What had been a bedroom that was shared by Gary and Denise Brubaker’s two sons – it was the boys’ idea to paint it purple and black – now holds vintage and collectible Halloween items that the Brubakers have amassed over the last 16 years.

Gary has loved Halloween for as long as he can remember. “Halloween has always been a big deal with me,” he admits. He loved everything about it … creating costumes, carving pumpkins, decorating the family home and trick-or-treating through Columbia well into the night. “How we survived, I’ll never know,” he says of the bad old days of Trick-or-Treat night, when cellphone tracking and other parental controls seemed very Jetsons-like. Denise, however, initially felt ambivalent about Halloween. “It wasn’t my thing,” she says.

Married for 53 years, the two met when Denise transferred from Lancaster Catholic to Columbia High School during her sophomore year. It was love at first sight. Despite the fact that the two grew up in Columbia, Denise is convinced fate intervened. “We probably would never have met each other had I not transferred,” she says. 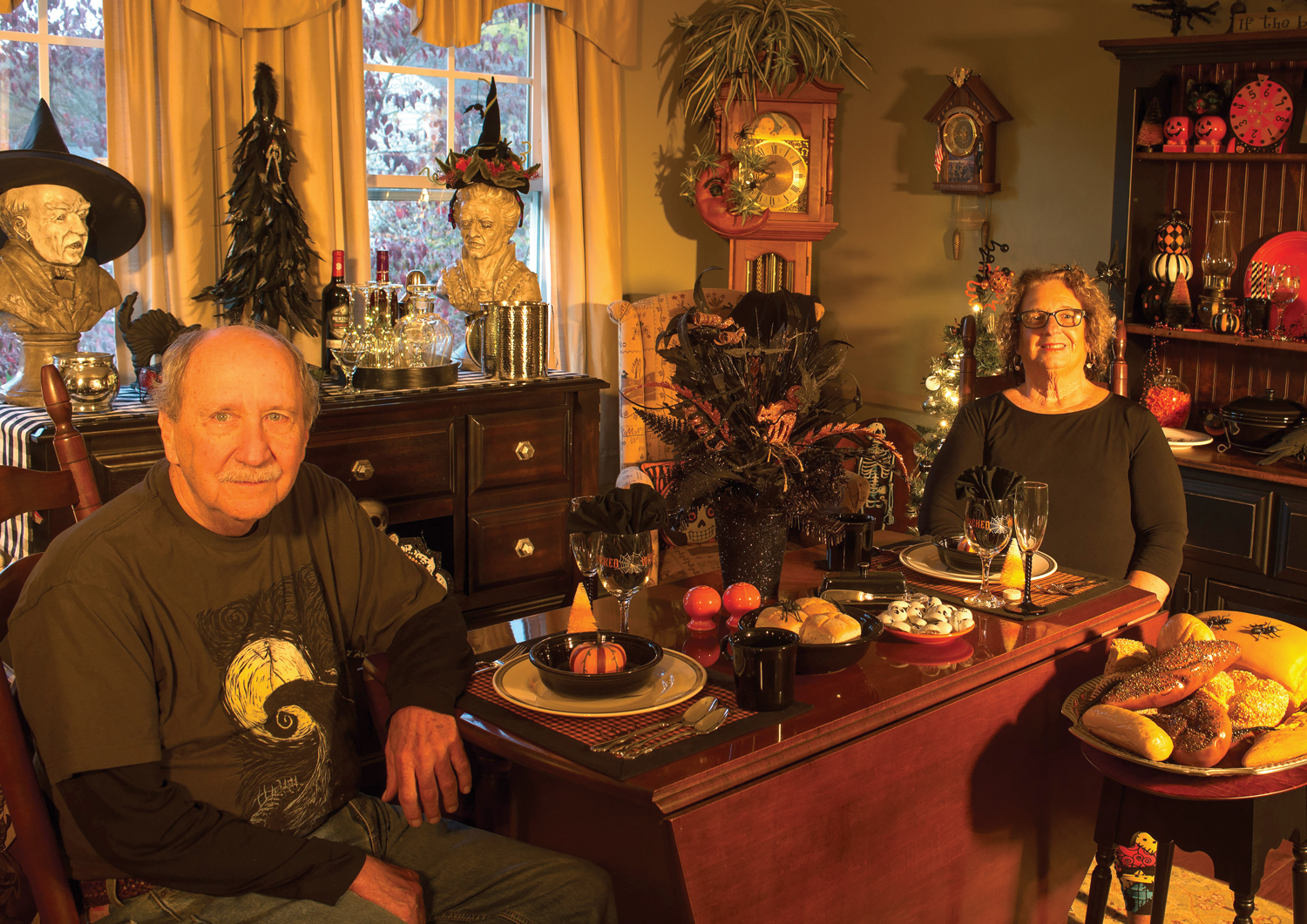 Gary and Denise Brubaker decorate the upper level of their home with newer finds for Halloween. Gary has loved Halloween since he was a child.

Life went accordingly. They welcomed two sons and a daughter and moved to a new subdivision on the outskirts of town in the early ’80s. “The boys shared a room in the lower level,” Denise says of their split-level home. “They came up with this crazy idea as teenagers to paint the walls purple.” Denise remembers thinking, “Why not?” and the room soon took on the hue of an eggplant with touches of black contributing to the “dramatic” décor. Unbeknownst to the Brubakers, the stage was set for the room to become Halloween central.

As for the Thanksgiving connection, about 16 years ago, Denise and Gary happened to attend a yard sale one of her co-workers was having. Gary spied two papier-mâché turkeys for sale and was intrigued. “She only wanted 50 cents each for them, so I bought them,” he recalls. Arriving home, he began to research the art form and, as he had an inkling, discovered the turkeys were worth much more than the price he paid. “That’s when I started noticing vintage Halloween stuff,” he says. 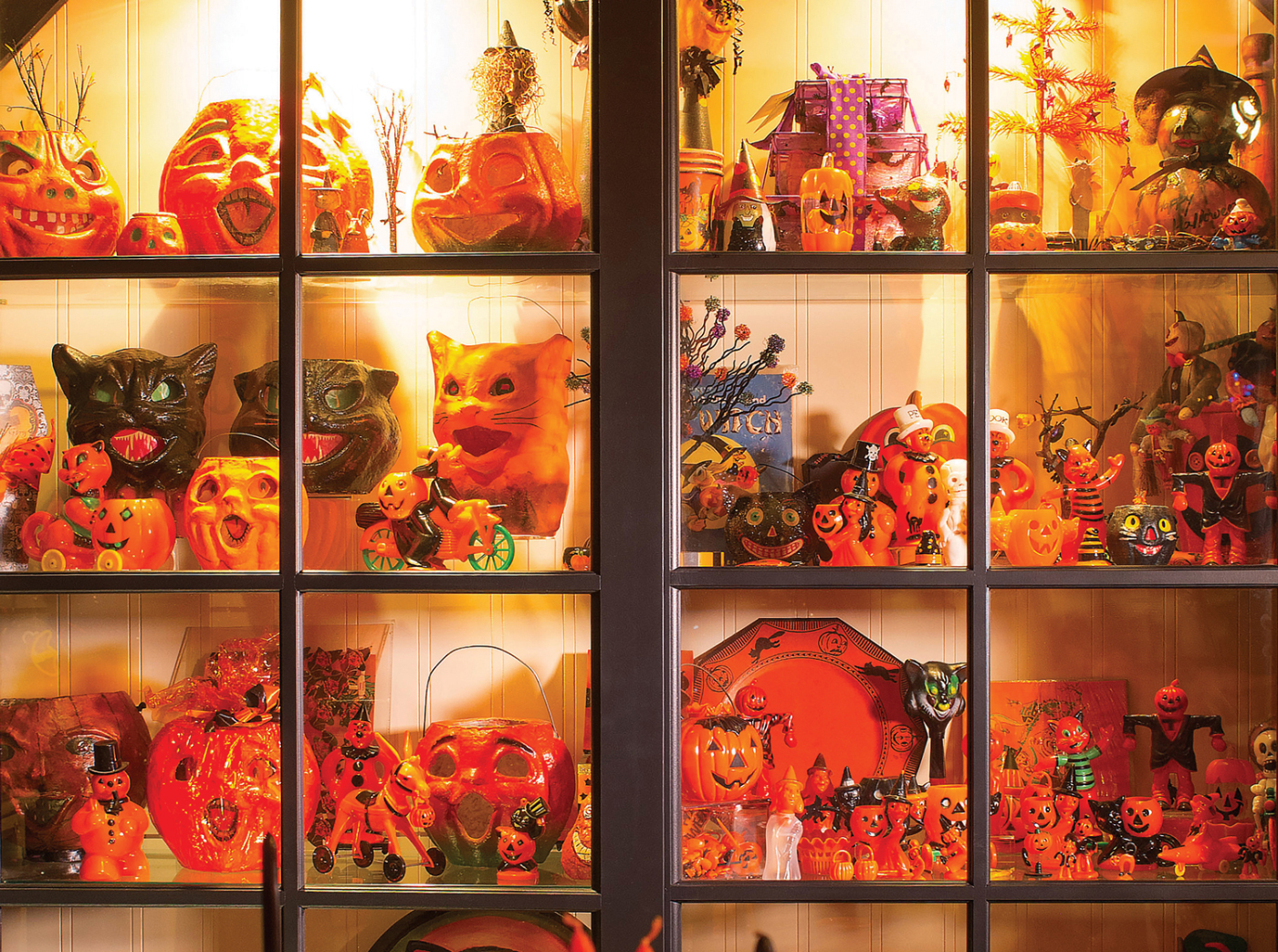 A glass-doored cabinet holds many of the vintage papier-mâché pumpkins and other seasonal decorations that Gary favors.

Denise, who loves to decorate for any and all holidays, followed her husband’s lead and upped the ante where Halloween decorating is concerned. It seems she comes by the decorating gene honestly. “I’m from a very large and creative family,” she explains. “Everyone’s into a different craft; we help each other with projects.” Three of her sisters are huge fans of Halloween and spend their leisure time searching for finds. “They’re always texting each other with news of what they’ve found and to see if one or the other wants it,” Denise says. Just like clockwork, Denise’s phone pings and a photo of a find appears. One of the sisters thought it would be perfect for Denise’s house.

One of those sisters, Christine Horn, opened her home for last year’s tour. “The other two helped her with it,” Denise notes, adding that Refresh Salon, which is owned by her niece, Becky Lewis, was also on the tour. “Last year’s tour was definitely a family affair,” she laughs. Has the Halloween-decorating gene “bitten” any of the Brubakers’ children? They report that one of their sons collects Día de los Muertos (Day of the Dead) items, which is a whole other story. 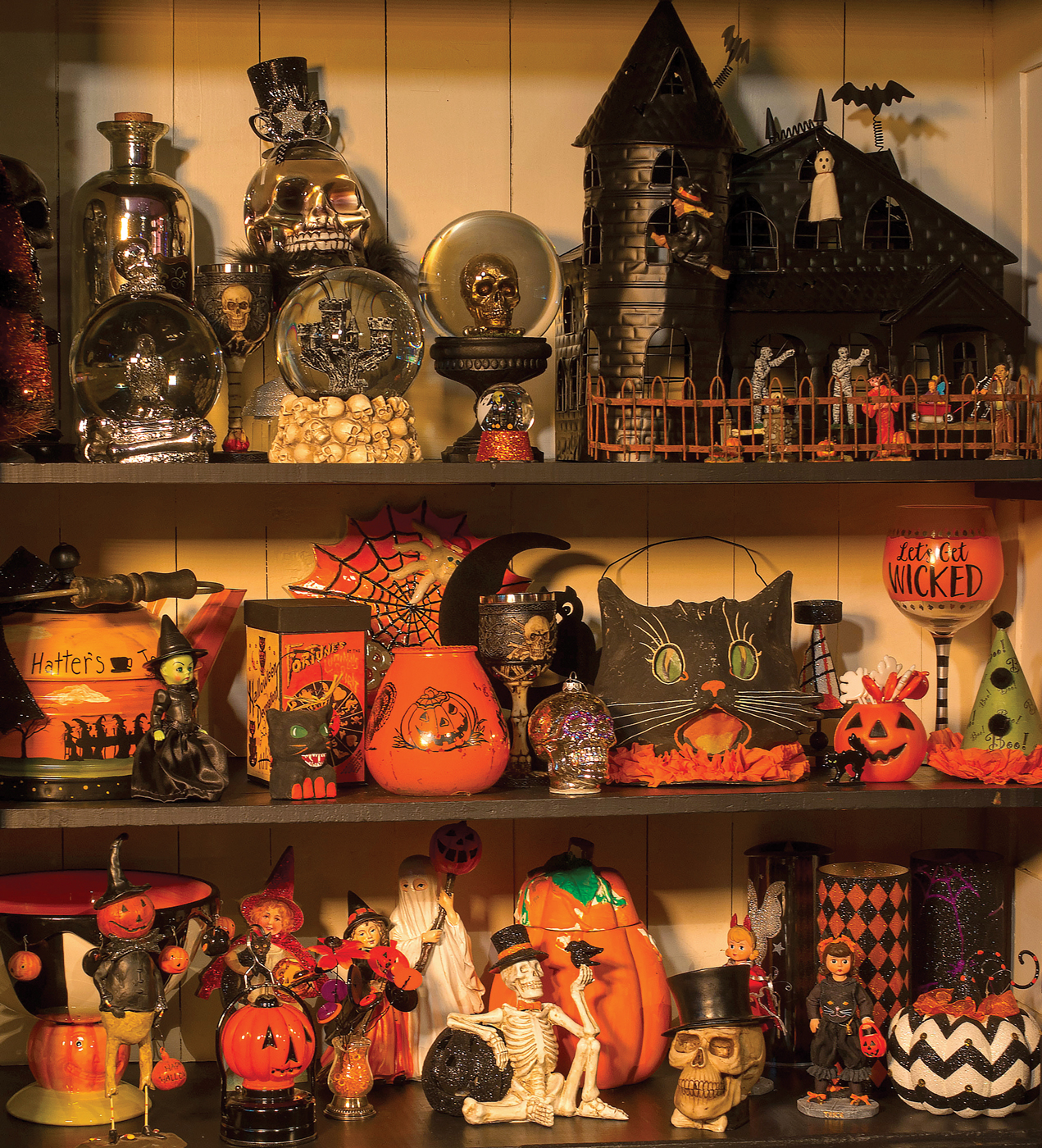 More collectibles fill the shelves of a bookcase.

The Brubakers have spent the last 16 years collecting. “I’ll buy anything having to do with Halloween,” Gary says of the vintage décor he prefers. However, finding vintage decorations in mint condition is becoming more difficult, so the Brubakers have widened their web and will often hop in the car and head for the unknown, having heard or read about a promising source that could be several hours away. “Everywhere we go, we look for different and unique stuff,” Denise says.

“I really like poking around in antiques shops,” Gary shares. He’s also come to rely on “reputable dealers” who keep him in the loop as far as Halloween inventory is concerned. One of his favorite “haunts” is the Strasburg Antique Market, where one of the vendors maintains a stellar display of Halloween items, including the coveted papier-mâché pumpkins and other décor. “The nice thing is it’s all kept in a glass case, so it’s in good condition. Plus, it’s on display year-round. Some places only put the stuff out for Halloween.” 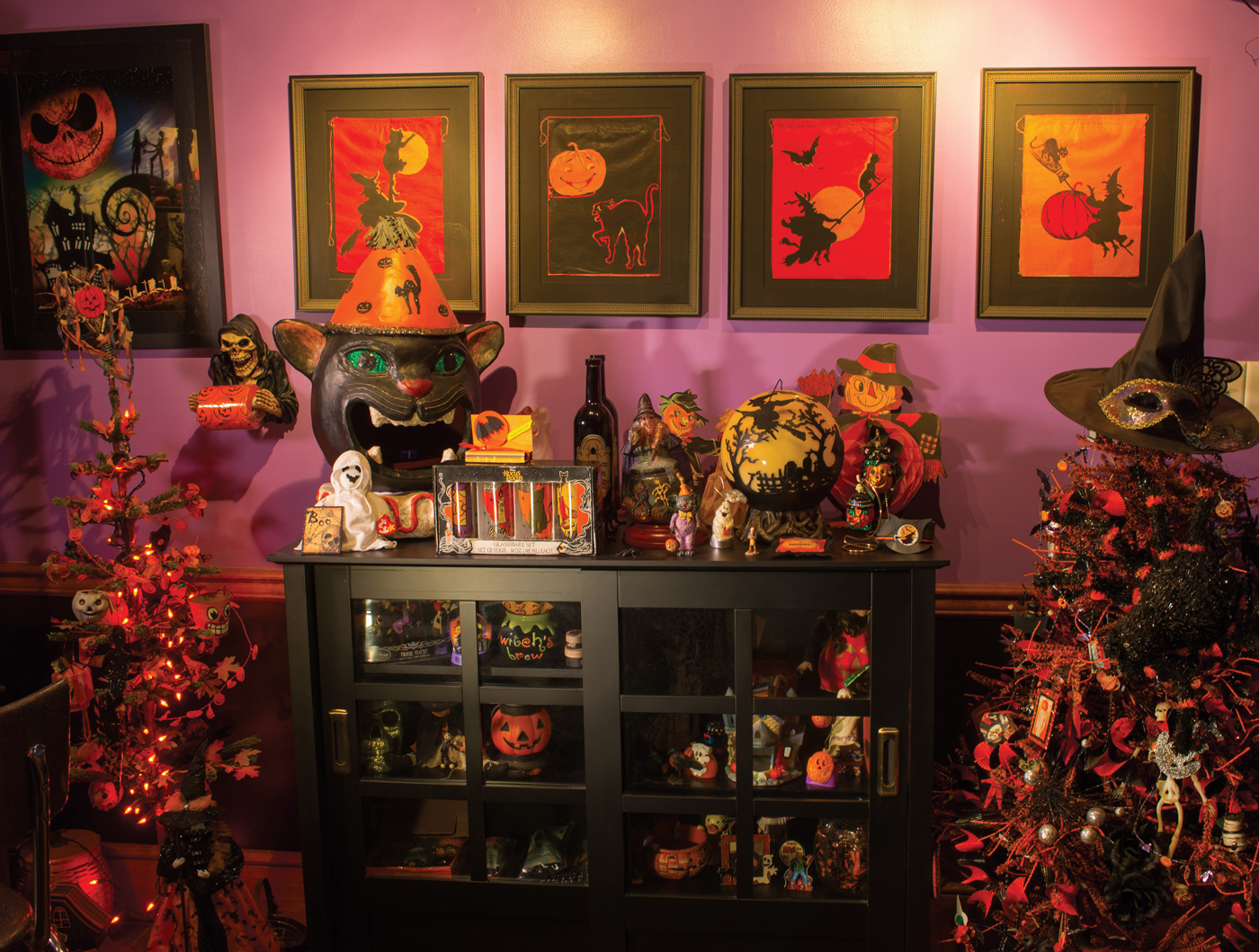 Vintage artwork decorates the walls, while trees are laden with Halloween-inspired ornaments.

Gary is also an auction junkie. Before he attends an auction, he goes through a ritual that involves researching the history of an item he is interested in and gauging its value. Denise reminds him of an auction they attended for which he did his homework and set a price he would not exceed. Another bidder had gone through the same ritual and a bidding war ensued. “He ended up going $300 over his limit,” Denise says. “I really wanted that pumpkin!” Gary says with a shrug. 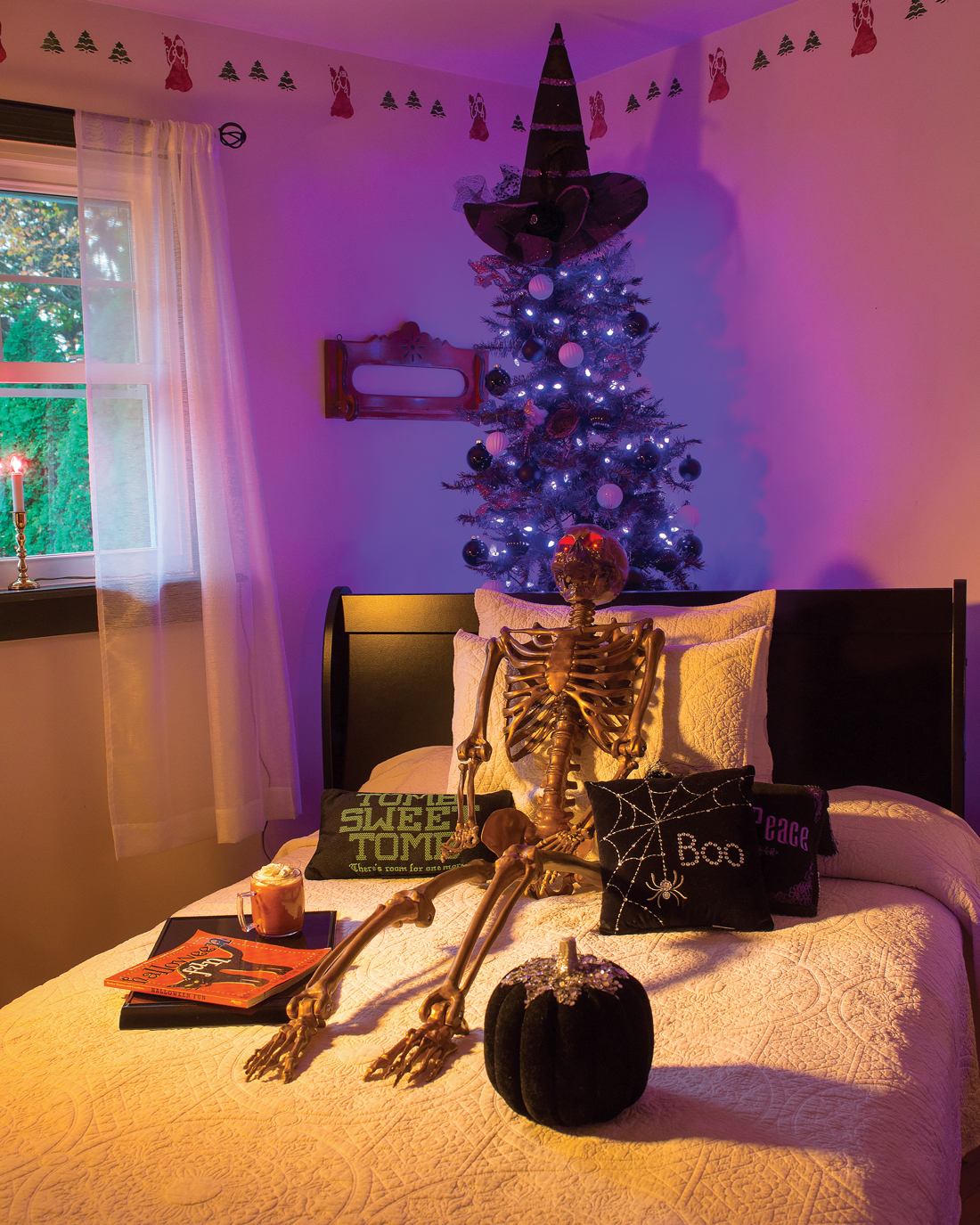 Even the bedrooms receive the Halloween treatment.

As you can imagine, Gary’s collection soon outgrew the tabletops and cabinets on the main floor of the house. That prompted Denise to suggest they turn the now-vacant room the boys once shared in the lower level into their Halloween room. “We had an empty room that was painted purple and black. It was perfect,” Denise says. The two began hitting yard sales and resale shops in order to buy bookcases and cabinets in which their collectibles could be displayed. The room turned out to be perfect for another reason – it’s climate-controlled and because minimal natural light enters, the items remain in pristine condition. 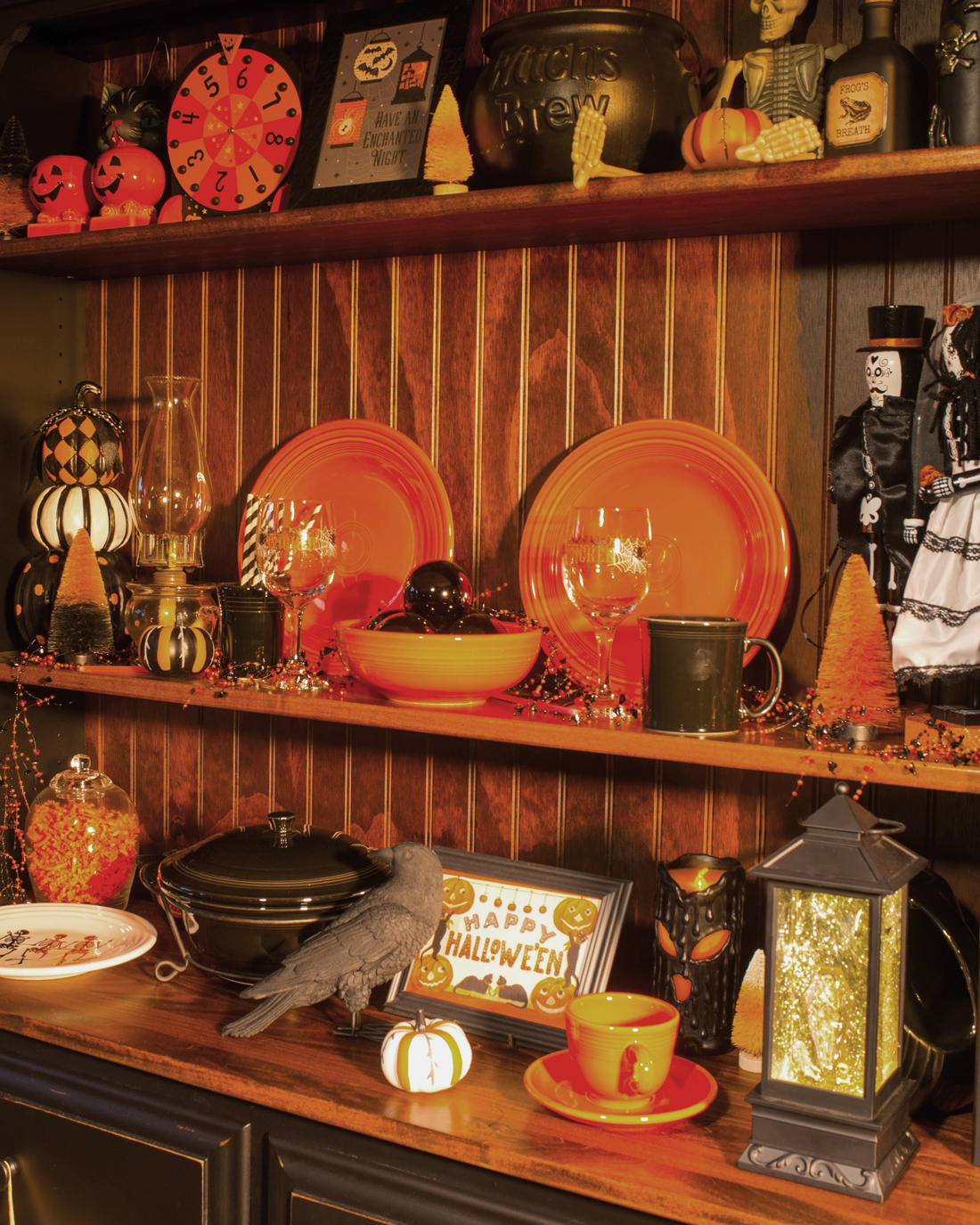 Denise puts her orange-hued Fiestaware to use for Halloween decorating.

Each September, the Brubakers prepare for Halloween by devoting three weeks to inspecting and cleaning the items in the Halloween room, rearranging the displays and squeezing in new finds. The room is literally bursting at its seams. “There’s no more room for another table or cabinet,” Denise says.

There’s no room upstairs either – Denise decorates the entire upper level of the house with the modern-day things she finds on her travels. But, unlike the lower level, the upper floor of the house makes a quick transition to Christmas as soon as Halloween is history. “Christmas is my thing,” she says. “In fact, I keep one bedroom decorated for Christmas year-round.” 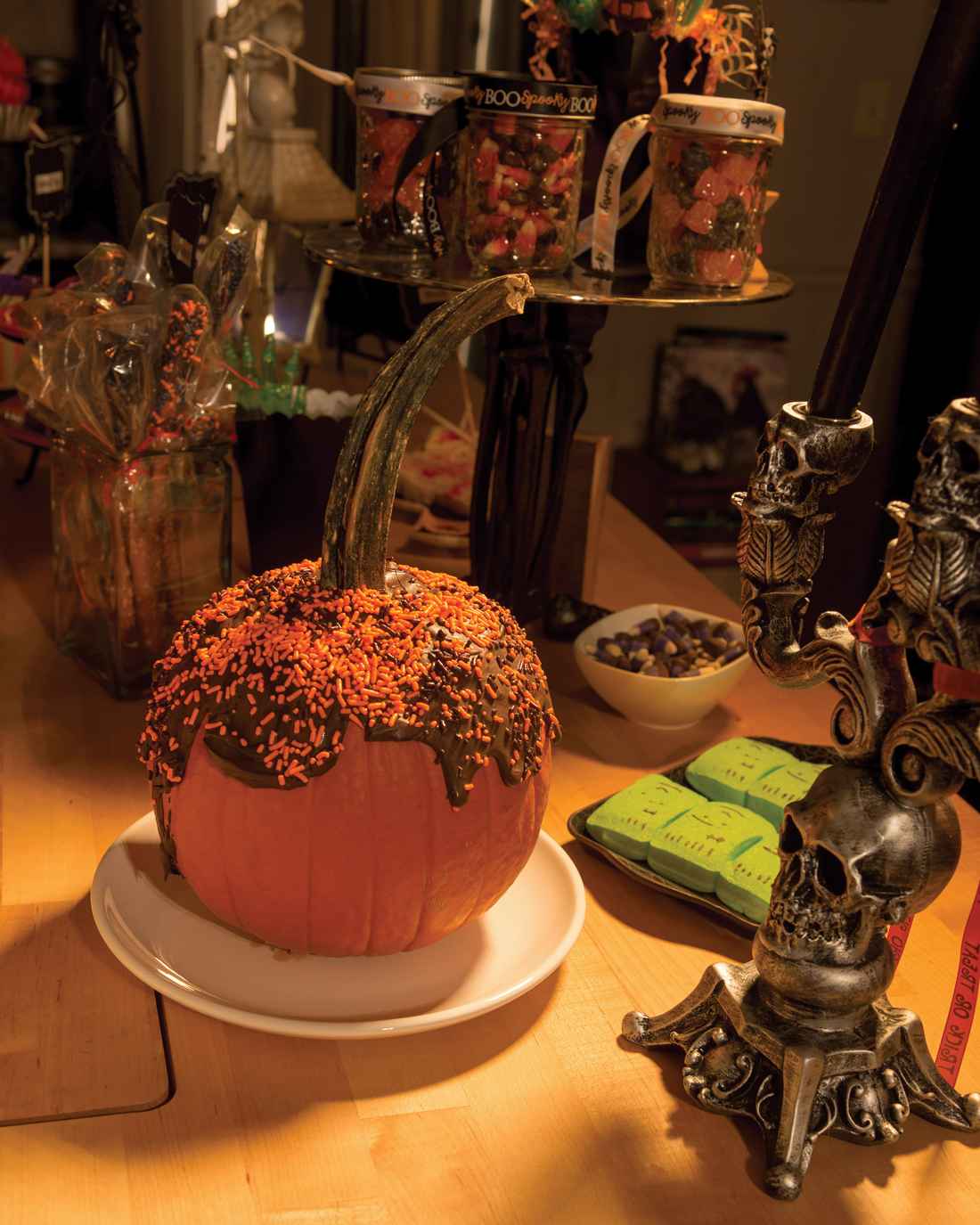 The delectable-looking pumpkin was one of Denise’s DIY projects.

As you stand and take in the Halloween collection and know that a treasure trove of Christmas items is lurking somewhere in the house, you wonder where everything is stored during the off-season. “It all goes where the cars belong,” Gary says. “In 35 years, we’ve never put a car in the garage,” Denise adds.

The Brubakers’ home will be a stop on this year’s Columbia Halloween House Tour.

A glass-doored cabinet holds many of the vintage papier-mâché pumpkins and other seasonal decorations that Gary favors.