For many businesses, the holidays have a decided effect on the bottom line. For some, holiday décor is the element that sets them apart. However, business establishments are conscious of the fact that they must walk a fine line between celebrating the season and not offending those who do not observe Christmas. Gene Marks, who is Jewish and wrote on the subject for Inc. magazine, offers a perspective that might explain why the month of December may be the most wonderful time of the year for people of all beliefs: The season “spreads joy.”

If you grew up in Lancaster, the holidays usually entailed a trip downtown to view Watt & Shand’s windows. The huge window on the corner was always magical. I remember how it shimmered and glowed. And, it was always filled with an amazing assortment of toys and larger-than-life stuffed animals in the weeks following Thanksgiving. With the approach of Christmas Eve, the window would become majestic, as it paid homage to the night on which Christ was born. The window was always a perfect balance of dreams and wonder.

Studies have shown that businesses that decorate for the holidays reap benefits that extend beyond the bottom line. Holiday décor creates a warm and inviting environment. It puts customers and employees in good moods. And, holiday décor in a commercial setting is an attention-getter that creates the kind of buzz that is priceless. People remember it long after it disappears — Watt & Shand’s windows, for example — and make a point to return to see what the next year brings.

We asked two business owners – Bob Fenninger, who owns the restaurant FENZ, and Cle Berntheizel, who owns the multi-faceted venue Garth — for their perspectives on decorating for the holidays. 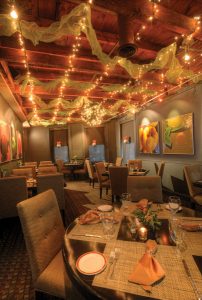 Bob Fenninger isn’t sure when decorating restaurants for the holidays became a phenomenon, but his guiding light has always been Gramercy Tavern in New York, where the restaurant’s staff – led by an in-house decorator and a floral designer – swing into action right after midnight on Black Friday and complete the transformation by lunch time. “It’s always stunning,” he reports.

While Bob doesn’t have an in-house decorator or a floral designer on staff, he does have Skip Bickert, who helps to manage the restaurant when he isn’t making decorating plans for the holidays. Skip is a local legend – the farmhouse he once lived in at the intersection of Fruitville Pike and Petersburg Road was always a must-see at holiday time. “People still remember the blue lights I used,” he says. Now, his home in the city attracts a steady stream of passersby over the holidays. 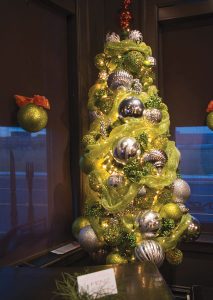 Bob appreciates Skip’s non-traditional approach to holiday decorating. “Everyone likes sparkle and lights,” Bob theorizes. “And, that’s Skip’s forte – the look isn’t about a specific holiday, rather it’s about providing a festive backdrop for celebrating a family get-together, a job well done, office camaraderie, life-long friendships or even a life-changing event.” FENZ is celebrating a milestone of its own this year – its 10th anniversary.

Skip begins to contemplate next season’s look as he removes the current year’s holiday decorations. He shops year-round but gets serious after Labor Day, when his main mission is to find the perfect ribbon.

The world is his oyster as far as ornaments are concerned. He shops big-box stores, specialty shops, garden centers and catalogues to find what he needs. Look closely and you’ll discover a lot of the ornaments are made of plastic; 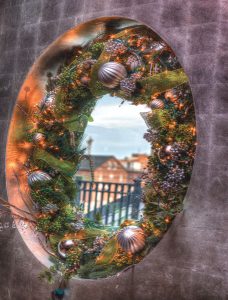 diamond dust, glitter and faux jewels transform them into objects of beauty. “There’s a lot of wear and tear, plus breakage,” he explains of the economics that are involved. Recycling also figures into the game plan. “We change things up, move them around, and it all looks brand new,” he says.

Skip also uses the tried-and-true white twinkle lights. “I’m not a fan of LEDs for interior spaces,” he says, noting he buys two or three cases of lights each year. As much as Bob and Skip would like to use natural trees and greens, longevity doesn’t allow it. “You almost have to work with faux,” Bob notes.

Last year’s décor played off the sienna and acid-green color scheme that defines the restaurant. Silver ornaments added the sparkle element. “The colors need to be tight,” Bob points out. 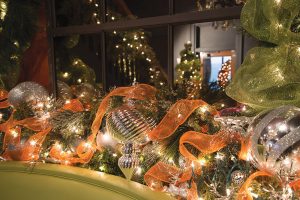 Skip works on the display over Thanksgiving weekend. “I’m always amazed by the number of people who follow it and ask when it will be done,” Bob comments. The effort goes into full gear on Sunday, when the restaurant is closed. Staff members, family and friends join Skip and Bob in transforming FENZ. “It’s become kind of a party,” Bob reports. “People just like to help.” By Sunday night, the “restaurant is glowing,” he notes. Then, it’s all hands on deck, as December equates to a full house. “Between parties and dinner reservations, we’re on track to have a busy holiday season,” says Bob.

Garth – The “Art” of Decorating 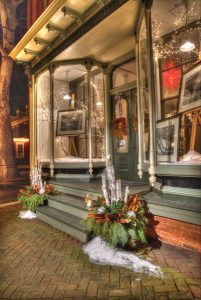 “It took me a while to notice that the word ‘art’ was in my name,” says Cle Berntheizel of his middle name, Garth. You might call the discovery serendipitous. Today, Garth entails an array of artful enterprises under one roof: gallery, framing, event venue and a cafe.

Cle originally operated his frame shop out of the basement of his home on Chestnut Street in Columbia. Tiring of his solitary existence, the outgoing Cle looked to relocate his shop to the downtown area. In 2009, he found the perfect location on South Second Street and set up a frame shop and gallery on the first floor.

Incredibly, the building provided Cle with a sense of “home.” Built in 1870, it was originally the site of the Boston Five & Dime store. From 1920 to 1933, its second floor served as the headquarters of Columbia’s first American Legion post, which was co-founded by Cle’s great-grandfather, Lieutenant Colonel Cleon N. Berntheizel, and 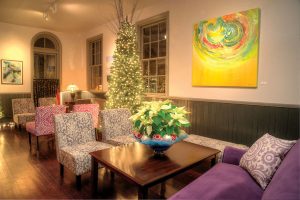 General Edward Shannon, both of whom had served in France and played roles in founding the national organization. “To think that my great–grandfather attended meetings and socialized in this building is kind of amazing,” Cle says.

When the second floor became available, Cle took it over. He expanded the gallery and opened a café. Then, it evolved into an events venue, hosting everything from birthday and 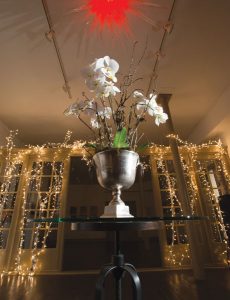 anniversary parties to showers and weddings. In July of this year, Cle purchased the building; he is making plans for further expansion into the outdoors and basement. “The ideas never shut off,” he laughs.

Cle loves the holiday season, and Garth fully reflects that fact. “I’ll admit, I like to take it a little over the top,” Cle confesses. The building, he notes, provides the perfect backdrop for holiday decor. “The windows and the floors reflect the lights,” he points out. “It’s kind of magical.”

Cle explains that the décor serves as a backdrop for clients’ holiday parties and as a  thank-you of sorts – each December he hosts a holiday party for clients, friends and family. “I want it to be really special,” he says of the evening’s festivities that feature food, beverages, live music and most of all, friendship. “I really wish my 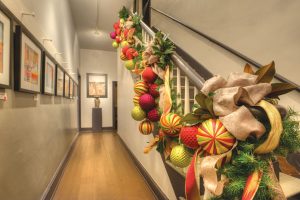 parents were here to see what Garth has become,” he says, noting that Garth the Frame Shop is currently working on its largest art installation to date — the new wing of Donegal Mutual Insurance Company. “It’s huge for us,” he says.

Themes for the venue’s holiday decor are formulated a year or more in advance. Fortunately, he has a very creative partner in Kerry Kegerise, who is a floral designer and owns the event venue Bear Mill Estate in Denver, as well as a creative friend, Dawn Fisher, who has designed displays for the National Christmas Center. He bounces ideas around with Kerry and Dawn and they help him with the decorating.

Last year’s theme  was White Christmas, while this year’s will be retro, as the decor will celebrate the 50s and 60s. Knowing that retro would be 2017’s theme, Cle spent a good portion of 2016 looking for ornaments and other decorative items. “We’ll work on it Thanksgiving weekend and have it ready for the December 1 exhibit opening,” Cle promises. 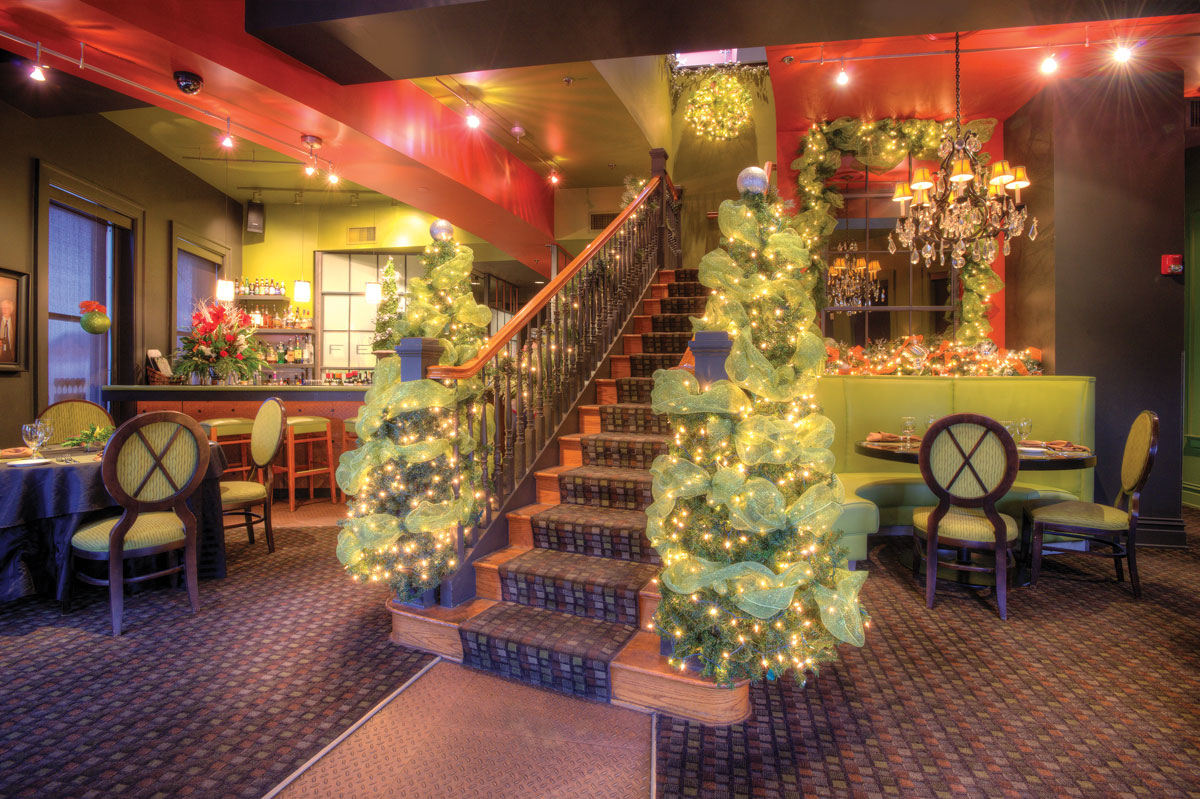