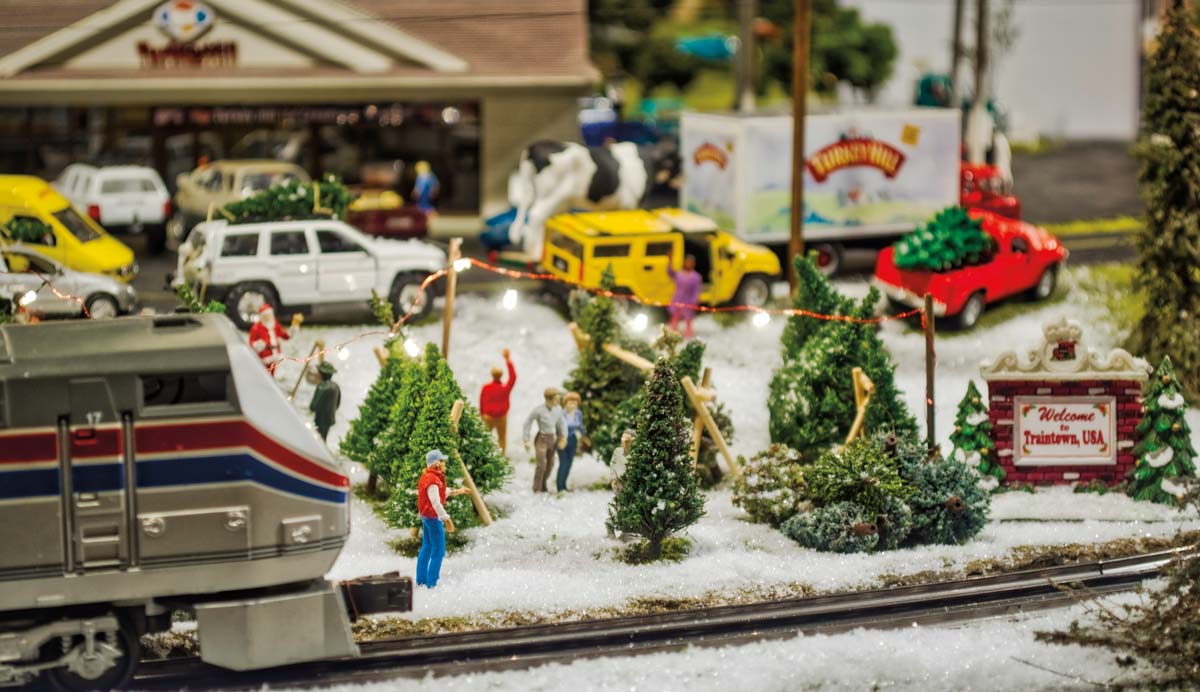 While The Choo Choo Barn in Strasburg officially opened in 1961, its story begins in 1945, when George Groff, freshly home from World War II, bought his oldest son, Gary, a Lionel Train set for Christmas. He then helped 2-year-old Gary assemble the set. Like Gary, the display grew, eventually taking over the family’s basement.

Word of the elaborate train display began to spread, and in the ‘50s, the Groffs began to  open their basement to townspeople and school groups during the holidays.

A decade later, the Groff children were headed for college, and when a garage became available along Route 741, George and his wife, Florence, began to think their train display might help ease the financial burden of tuitions. Since the garage resembled a barn, George decided to name it the Choo Choo Barn. He opened for business on Thanksgiving Day.

As the years passed, George opened a gift shop and created a picnic grove on the property. The Groff children also became involved and incorporated their own ideas into the display. When George and Florence retired in 1979, they passed ownership to their youngest son, Tom, and his wife, Linda. Now, a third generation – their daughter, Kristi – is involved in the family business. As second-generation owners, Tom and Linda have continued the Choo Choo Barn legacy. They also expanded the scope of the business by opening the Traintown USA complex, which is home to shops and a restaurant, making it a lovely destination for visitors and rail fans alike.

The Choo Choo Barn offers something extra special for locals. Within the 1,700-square-foot display are a number of iconic landmarks such as replicas of the Strasburg Rail Road, Dutch Wonderland, a Turkey Hill Minit Market, and even the Groff family’s home, where the story began. In all, the display has a total of 150 hand-built animations with 22 moving trains.

Several years ago, Tom was inspired to add a touch of winter scenery to the mix for the holidays. On Thanksgiving Eve, the Groffs and their employees decorate, string Christmas lights and even have a quick indoor blizzard that transforms parts of the display into a winter wonderland. Of course, the holiday scenery wouldn’t be complete without the hunt for 55 Santa Claus figures that are hidden throughout the display. There’s one for each year the Choo Choo Barn has been in business. I’m told this year’s Santa will not disappoint.

The display is not the only holiday cheer you’ll find at the Choo Choo Barn: 2016 marks the 28th year of Canned Food Fridays. Bring a canned-food item, and you’ll receive one free admission, regardless of age, to the train display. Canned Food Fridays will be held December 2, 9 and 16 (9 a.m.-8 p.m.), as well as December 23 (9 a.m.-4 p.m.). During the last 27 years of Canned Food Fridays, the Groff family has collected more than 30 tons of food from more than 50,000 visitors. The food is donated to local food banks to help those in need.

The Choo Choo Barn is located at 226 Gap Road in Strasburg. This year’s holiday display will be on view from November 25-January 16. Call 687-7911 or visit choochoobarn.com.