I like to describe Matt Keasey as the mad scientist brewer of Lancaster. If he thinks it can go into a beer, he is going to try it. Take the Astounding She-Monster for example; it is an IPA full of real, fresh mangoes.

Matt started Spring House Brewing Company with his wife Nikki in 2000 at their farmhouse in Conestoga. He concocted Seven Gates Pale Ale, which immediately became an underground hit in the young, but growing, craft beer community. At first, to get some of Matt’s brews, beer-seekers needed to visit his barn, which he outfitted into a massive brewery with an upstairs tasting room. Eventually, his fans outgrew his location, and he opened the downtown Spring House Taproom. The popularity of the brand reached beyond Lancaster and brought in more and more fans, so he moved the brewing site to the city in 2015.

Beyond Seven Gates and the Astounding She-Monster, Spring House offers two other year-round brews: Big Gruesome, a high ABV chocolate-peanut butter stout bursting with flavor, and Lexicon Devil, a hoppy and fruity pale ale, which has just enough malt to keep itself out of the IPA category.

The new brewery is housed inside an old contractor’s warehouse on the city’s south side. The open design allows visitors to view the brewery’s massive tanks and discuss the found artwork – graffiti – unearthed during renovations. When visiting, look down. The wood floor was the ceiling of the first floor, which was partially removed to create space for the brew works.

For the new space, Matt brought in a chef who is testing the taste bud boundaries of Lancastrians. On my first visit, I had a rabbit sandwich and duck poutine. Recently, I had the most amazing cockles steamed with white wine, garlic, tomatoes, soppressata ham and tarragon.

And, to think that it all started because Matt got sick and tired of his day job with a pharmaceutical company. 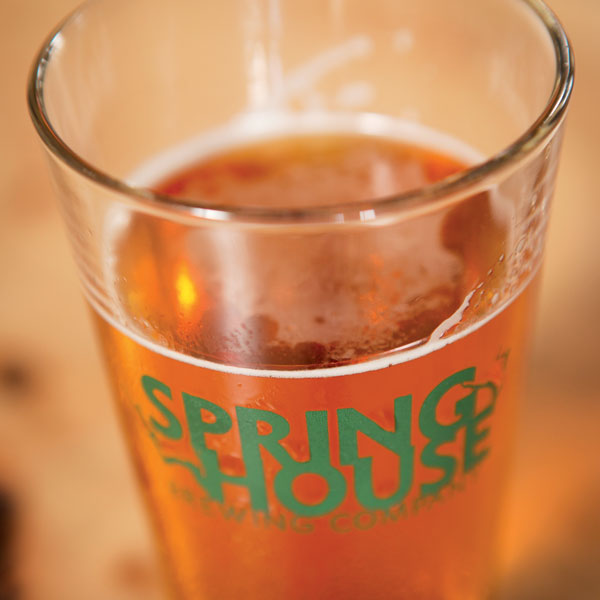