Imagine for a moment that you’re a mathematically savvy, wildly creative artist. Your imagination-ruled right brain and your analytical-driven left brain chug along in balanced harmony. And to top it off, you’re an extroverted engineer who thrives on thinking beyond the norm of what’s already been done. Now let’s plan a party. 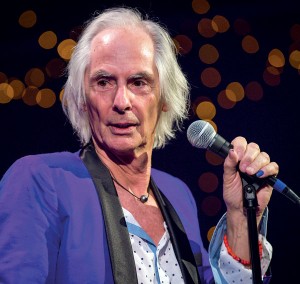 Mickey Tait, scenic designer extraordinare and impresario for his own birthday bash, welcomed guests
to the party.

For Michael Tait – the founder of Lititz-based TAIT Towers – planning his own birthday party was another production in a long list of over-the-top events that have set the stage for countless superstars’ concert tours. During his career, he and his team have masterminded the logistics of staging and scenic design concepts for Yes, The Rolling Stones, Madonna, U2, Taylor Swift and 19 of the top 20 highest-grossing artists’ world tours. With a front-row (and sometimes backstage) view of these stratospheric spectacles for over 30 years, it takes a lot to impress Michael Tait.

With every client’s production, he has learned from and translated his professional experience into an innate understanding of what makes a party an energized celebration that guests will be buzzing about long after the last partier heads for home. It’s all in the engineering.

When semi-retirement left a void in his life, Michael Tait filled it with travel and dance. A lifelong workaholic (admittedly with a degree of partying thrown in over the years), Tait first pursued tango lessons, then discovered salsa and soon was captivated by the Latin dances. During travels to Miami, Tel Aviv, Paris, Hong Kong and Havana, he sought out more instruction, while also taking lessons here at home. Feeling younger with each dance step as he approached the second half of his life, he became known as Mickey Tait.

When it was time to celebrate Mickey’s 35th birthday (you do the math), the bash was true to his rock n’ roll roots and his new-found passion for dancing – with the theme of “Think Young.”

Commandeering the manufacturing space of TAIT Towers as his party space, Mickey set to laying out a party that would offer his 260 guests a series of surprises throughout the night. A digital invitation enticed guests to come enjoy endless cocktails, tapas and rumba to start the evening, then party ‘til the wee hours with two bands.

While that sounded like fun, Mickey was planning much more. The party began two stories above the yet-to-be-unveiled party space in TAIT’s transformed office and commissary space, where guests were greeted with a specialty cocktail to kickstart the party. Mysteriously blue and named the Ba-Cha-Ta (the namesake of a Latin dance from the Dominican Republic), the tiny tasting (less than an ounce) was hailed as a “fountain of youth” elixir – how could anyone resist? 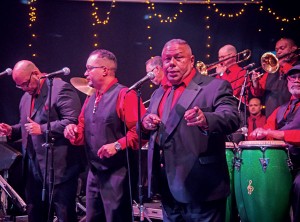 The PA Mambo Orquesta provided the Latin flavor for dancing.

A band’s rumba music could be heard as guests paused to pose for the professional photographer before proceeding to the cocktails and tapas and greeting fellow party-goers. Chef Tim Carr’s selection of hors d’oeuvres were purposely finger foods, intended to grab on the go, encouraging guests to socialize and circulate.

A few hours later, the rooms suddenly went dark – a signal that the next phase of the party was about to begin. Guests flowed to the ground floor, where many paused for a photo op in front of the Rolling Stones’ iconic tongue (a typical part of the business’ décor, left over from a Rolling Stones’ benefit concert in Toronto). In the huge space where similar staging and scenic elements are created every day, Mickey had designed a room within a room, about to be discovered by his guests as they climbed a set of stairs to pass through a black curtain, salsa music calling to them from the other side. They entered a party room of 4,352 square feet – carefully calculated to provide 8 square feet per guest, the cocktail-party ratio that feels pleasantly crowded but not crushed.

The 60-by-68 foot room was divided into sections of higher-to-lower elevations, thanks to TAIT’s deck staging that has supported Prince, Lady Gaga and scores of other performers. Full-service bars stocked with exotic spirits from all over the world welcomed guests as they entered on the highest level, followed by a level of comfy lounges with sofas, chairs and low cocktail tables to chill and listen to the two bands as they alternated continuous sets of rock and Latin dance music, without breaks. Lounge areas and hi-top tables surrounded a sunken dance floor, allowing all non-dancers to be voyeurs as they enjoyed watching the dancers, some technically accomplished and many just free-spirited and having fun.

Nail polish was available on each table for those who wanted to join Mickey’s signature rock star look of the painted pinkie nail. Candy cigarettes allowed guests to pretend to indulge in the once-chic vice. High above the crowd, the room’s 35-foot ceiling was visually lowered to give the room a more intimate feel through swagged strands of thousands of tiny LED lights, custom-made to span the width of the room. 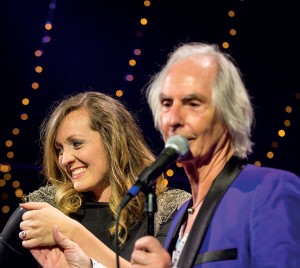 The big surprise during the birthday bash was Mickey’s presentation of a stellar engagement ring to Lauren Snyder, who beamed with delight.

As guests danced and celebrated, no one noticed that a hidden dais and microphone were quietly coming to life in the center of the room. Mickey stood on the small platform to welcome his many circles of friends who came together to celebrate his birthday. But true to form, the host had another surprise for his guests as he presented a knockout ring to his lovely girlfriend, Lauren Snyder, and they officially announced their engagement.

The party was newly energized with another reason to celebrate for hours on end. When guests finally called it a night, they were offered a take-home gift of Mickey’s native Australia’s signature Vegemite and a “prescription” pill bottle filled with M&Ms for the morning after, guaranteed to preserve one’s youth.

The engineer in Mickey Tait had it all under control. He had pre-arranged to direct the bands’ playlists through hand signals from the dance floor, matching the energy level of the party. To be able to give every guest his personal attention, he calculated that he could spend 1 minute and 20 seconds with each person.

This was a bash engineered for maximum fun. 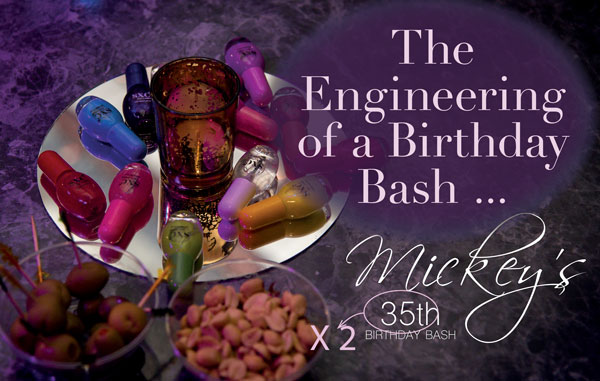 Nail polish was available on each table for those who wanted to join Mickey’s signature rock star look of the painted pinkie nail.